Control of pressure and flow in the cardiovascular system

Control of pressure and flow in the cardiovascular system

This chapter describes the control of pressure and flow in the cardiovascular system. The control of the circulation may be viewed in two different ways: (1) control to ensure an adequate distribution of blood to the body as a whole and (2) control to adjust that distribution to provide for the differing demands of the different parts of the body. The control of arterial blood pressure depends on two factors: (1) the flow produced by the pump and (2) the resistance of the flow pathway. The blood pressure, therefore, is the product of the cardiac output and the resistance of the circulation to flow. Variations in flow to different organs are achieved by nervous stimuli controlling the constriction or dilatation of arterioles, arteriovenous shunts, and precapillary sphincters. There is some degree of intrinsic stabilization of blood flow to particular regions or organs despite changes in the perfusing pressure. This is termed autoregulation: it is mainly because of the ability of the walls of the blood vessels, like smooth muscle fibers elsewhere, to respond to stretching by contraction. Blood pressure and blood flow may also be modified by hormonal influences acting both in the body as a whole and more locally. A decrease in oxygen concentration or an increase in the other factors causes vasodilatation. Thus, the blood supply to an organ is usually governed by its metabolic need. The sympathetic system with its combination of activity through nervous pathways and the release of adrenaline from the adrenal medulla can control both the overall blood pressure and also flow to different organs.

The control of the circulation may be viewed in two different ways: control to ensure an adequate distribution of blood to the body as a whole, and control to adjust that distribution to provide for the differing demands of the different parts of the body. At the same time blood flow to the priority organs -the brain and the heart – must be maintained. A peripheral adjustment of pressure may well result in a reduction in flow through the vessels concerned whilst vasodilatation and an increased volume flow of blood may be at the expense of pressure and velocity of flow either in the local circulation or by differential effects elsewhere.

The control of arterial blood pressure

If blood pressure increases, the transmural pressure in the major arteries is increased and the vessel walls stretch. Similarly, a decrease in pressure permits the vessel walls to recoil. Blood pressure can, therefore, be monitored by stretch receptors in the walls of the blood vessels. It is probable that such stretch receptors are found in many parts of the circulation including the walls of the cardiac chambers themselves. However, the best known and most important are found in the walls of the arch of the aorta and in the walls of the internal carotid arteries just after the bifurcation of the common carotid vessels (Fig. 15.1). These stretch receptors are branched nerve terminals with bulbous swellings – almost like the flower-spray type of nerve endings. The internal carotid artery is dilated to form a swelling termed the carotid sinus and the walls of the sinus are more distensible than those of the vessel before and after this point. The carotid sinus and the arch of the aorta, then, can be regarded as sensor areas for blood pressure measurement, baroreceptor areas. Pressures below 9kPa produce no response from these sensors but from that pressure up to about 20kPa their response is almost linear. Any recording of their normal activity reflects the regular cycle of systolic and diastolic pressures with a burst of action potentials at each systole superimposed upon the regular frequency of action potentials proportional to the diastolic pressure. 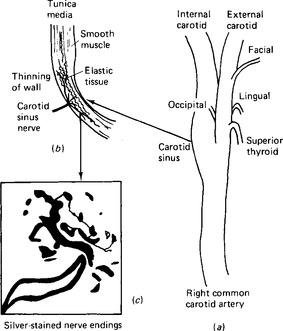 The input pathways of the blood pressure control system (Fig. 15.2) are a branch of the glossopharyngeal nerve from each carotid sinus and a branch of the vagus nerve from the aortic arch. These nerves are called depressor nerves since an increased input of action potentials along them to the medulla reduces the rate and strength of the heartbeat. 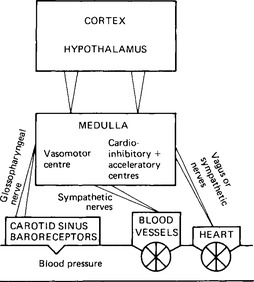 Figure 15.2 Outline of the blood pressure control system. The carotid sinus system is shown: the aortic arch receptors send their input through the vagus nerve to the same centres. 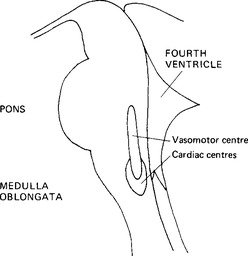 Figure 15.3 The situation of the blood pressure control centre in the medulla oblongata. midline sagittal section.

The output pathways of the system are the sympathetic nerves to the smooth muscle of the arteriolar walls, and the cardiac branches of the vagus and sympathetic nervous systems.

The feedback control system is in fact much more complex than this (Fig. 15.4). There is evidence of other pressure receptors in both the atria and the ventricles as well as in other blood vessels. Other factors can modify the response to changes in blood pressure. The cardiovascular control areas receive inputs from the receptors in the carotid and aortic bodies which monitor the partial pressure of oxygen in the blood. These peripheral chemoreceptors will be dealt with more fully in Chap. 17 in relation to respiration. They respond to decreases in partial pressure of oxygen or to decreased blood flow. In general impulses from them cause an increase in vasomotor activity. Impulses from the aortic bodies usually cause tachycardia, but those from the carotid bodies may cause bradycardia. In the medulla itself increased partial pressures of carbon dioxide and decreased partial pressures of oxygen at first stimulate the cardiovascular control areas, but then depress nervous activity. 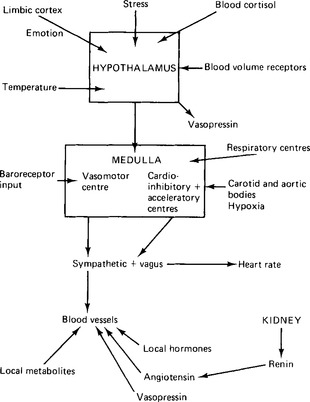 Figure 15.4 Factors other than the baroreceptor reflex which influence the control of blood pressure and the state of dilatation of the blood vessels.

The feedback control system is able to maintain a fairly constant arterial blood pressure by these apparently simple components of a feedback loop. This system by itself is able to adjust the blood pressure during changes in posture, or after changes in the calibre of blood vessels, or when the venous return to the heart is varied. It does not, however, adjust the differential flow to different parts of the body, except inasmuch as the effects of sympathetic stimulation are selective in different vascular beds, and it does not adjust flow in response to external stimuli or changes in external environment. Differential flow can be controlled entirely locally, or, alternatively, may be directed by some higher centre. The activity of the medullary centres may be adjusted by interaction with other medullary or pontine centres involved in controlling other activities, such as respiration. Some integration of body systems occurs, therefore, even at medullary level. There are, in addition, controls exerted by higher centres. Biofeedback treatments make use of voluntary control of blood pressure by conscious cortical direction. Normally, however, there is no direct cortical control but the hypothalamus, which is the main area of the brain concerned in the integration of hormonal and nervous responses, and the area through which manifestations of limbic brain activity are channelled, exerts a general control over the medullary cardiovascular centres. The responses of anger and fear, and the responses to exercise, involve complex adjustment of the functioning of the cardiovascular system. Part of the response to loss of blood or a decrease in body fluids is cardiovascular (Chap. 16), and the control of body temperature, centred in the hypothalamus, demands the balancing of peripheral vasoconstriction and vasodilatation with the need to maintain the blood pressure.

The sympathetic system with its combination of activity through nervous pathways and the release of adrenaline from the adrenal medulla can control both the overall blood pressure and also flow to different organs. Both adrenaline and noradrenaline act differentially via α and β-receptors (p. 142

Tags: Physiology for Dental Students
Dec 5, 2015 | Posted by mrzezo in General Dentistry | Comments Off on Control of pressure and flow in the cardiovascular system
Premium Wordpress Themes by UFO Themes
WordPress theme by UFO themes