Fig. 6.1
An upper first permanent molar affected by MIH showing characteristic predisposition to post-eruptive breakdown superimposed with dental caries
This chapter summarizes what is known about the structure, composition and properties of hypomineralized enamel and relates this knowledge to the clinical appearance and behavior of MIH-affected teeth. The first part of this chapter briefly reviews otherwise healthy sound enamel, while the second part describes the macro- and microscopic appearance of MIH enamel, its chemical and structural properties and their impact on its mechanical behavior.

Fully formed, sound enamel is 96 % weight and 86 % volume mineral (inorganic). It is produced by ameloblasts, which are highly specialized calcium transporting cells that are lost once amelogenesis is complete and the tooth erupts. Enamel is unique in the body, as it does not have the ability to heal or regenerate once tooth eruption is complete. The resulting enamel in health is a well-organized, highly mineralized, hard tissue that can withstand significant occlusal forces and the challenging oral environment.
Enamel mineral is initially a carbonated apatite which, through a process of maturation, is ultimately composed predominately of hydroxyapatite crystals (Ca10(PO4)6(OH)2) with trace elements such as magnesium, fluoride, strontium and lead. Although highly mineralized enamel does allow some movement of molecules, in comparison to dentine its permeability in health is minimal. The orientation of the crystals together forms the rod structure (prism), which represents the “mineralized trail” taken by the ameloblasts and their Tomes processes as they migrate along an undulating course from the amelodentinal junction (ADJ) to the enamel surface. Enamel rods are between 3 and 7 μm in diameter. There are approximately 1,000 crystals found in each rod and each rod interdigitates with the neighboring ones. Where the rods meet, the crystals have different directions to this in the neighboring rods, thus creating a very narrow interface with slightly increased space between the crystals containing a greater abundance of organic matter. This area between the different rods is known as inter-rod areas or rod sheaths (Fig. 6.2). 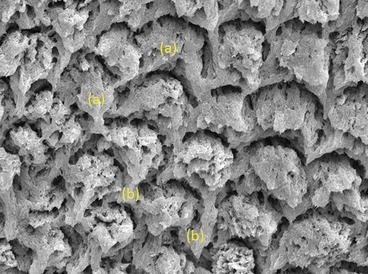 Fig. 6.2
Basic organization of the enamel rods as seen under the SEM. (a) Typical rod structure. (b) Inter-rod area (rod sheath)
Enamel does contain some organic material but only 1 % by weight (2 % by volume) and with a further 4 % water by weight (12 % by volume). The organic component of enamel is composed of proteins and lipids, which are produced mainly by the ameloblasts, although some may be derived from exogenous substances such as blood and serum. An area of higher concentration of organic material is found in the “tuft” region. Enamel tufts lie along with lamellae and spindles and are normal defects found in mature enamel but may represent an area of mechanical weakness. The role of the protein in enamel is still unclear but is thought to affect the behavior of this complex tissue, reducing its brittleness and imparting it with more metallic-like mechanical properties [1].

Clinically, MIH enamel defects appear as well-demarcated opacities within otherwise normal-looking enamel. These opacities are generally visible to the naked eye and vary in color from creamy-white to yellow or brown and affect the cuspal areas, inclined planes and smooth surfaces. When MIH teeth, with clinically obvious opacities, are extracted and sectioned prior to any in vitro testing, the lesion usually extends from the ADJ to the surface of the tooth and the cervical enamel appears normal macroscopically (Fig. 6.3). 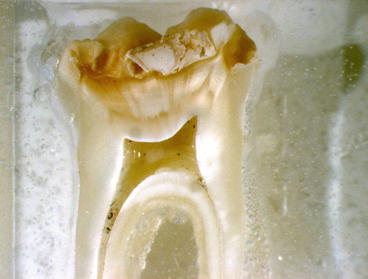 Fig. 6.3
A section through an extracted MIH-affected first permanent molar showing the lesion extending from the ADJ outwards through the occlusal surface with apparently unaffected cervical enamel

The term “mechanical properties” refers to the characteristics of a material that determine how it reacts when subjected to some type of force. Understanding the mechanical properties of hypomineralized enamel helps clinicians predict the behavior of MIH-affected teeth. Two properties in particular, hardness and elastic modulus, have been the focus of most research. The hardness of a material provides a measure of its resistance to permanent indentation and is considered to reflect its susceptibility to abrasive wear. Elastic modulus provides information on how a material flexes under loading/pressure such as occlusal forces. Both hardness and elastic modulus testing rely on dropping an indenter of a known size and shape into the material under test. The size or depth of the resulting indent is measured, and the resulting “hardness” is calculated as pressure (force/area). The elastic modulus depends on the shape of the loading/unloading curve of the indenter and is also measured in the units of pressure. Unfortunately, different studies use different units such as GPa or Knoop hardness number (KHN), which makes inter-study comparisons difficult.
Sound enamel has a hardness of between 3.5 and 5.0 GPa while its modulus of elasticity is 77.25 ± 3.15 GPa (see Table 6.1) [2, 3]. This confirms that sound enamel is very hard and resistant to wear. In comparison sound dentine has a low wear resistance, with a hardness of around 0.83 GP and is more flexible than enamel with a modulus of elasticity of approximately 20–25 GPa [4]. Hypomineralized enamel has been shown to have mechanical properties that are similar to those of dentine as opposed to those of sound enamel. Hardness values for enamel from hypomineralized first permanent molars have been reported as low as 0.5 GPa up to approximately 2 GPa with a modulus of elasticity of around 15 GPa [2, 3]. This 50–75 % reduction in the mechanical properties suggests that hypomineralized enamel has a low resistance to wear and will flex on loading which helps explain why MIH-affected teeth appear clinically weaker and more prone to fracture. Further work by Crombie and colleagues has shown that in general (although not always) white/cream-colored opacities are harder than yellow-brown lesions [2]. This information can be used clinically to help predict which teeth are likely to fracture or wear on eruption and which may be able to be monitored over time.
Table 6.1
Hardness and modulus of elasticity of hypomineralized vs sound enamel
The mechanical properties of sound enamel do vary across the tooth surface [5– 7]. This has also been found in the enamel of hypomineralized first permanent molars with the surface of the lesion being harder than the body [8]. Furthermore, there is a transitional zone between the apparently sound enamel of the cervical region and the hypomineralized defect (Fig. 6.4a–c). This transitional zone is approximately 500–600 μm (0.5–0.6 mm) in width, with a linear reduction in mechanical properties from the sound to affected enamel [9]. 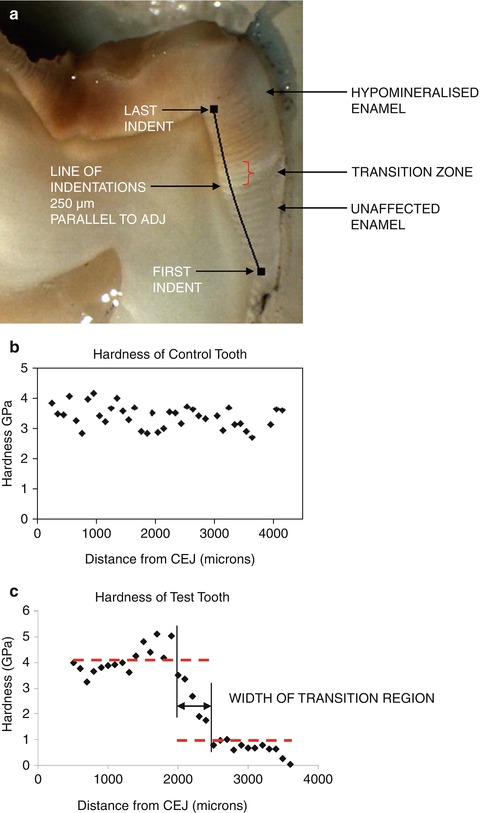 Fig. 6.4
(a) A cross section through an MIH-affected first permanent molar showing the transitional zone between the occlusal-affected enamel and the normal cervical enamel. (b) Hardness of unaffected control tooth from enamel at CEJ (cementoenamel junction) to a position level with the dentine cusp tip. (c) Hardness of first permanent molar seen in (a) showing the transitional area found between the sound and hypomineralized enamel
Studies have confirmed that the hardness and modulus of elasticity of enamel in the cervical region are essentially normal. This means that clinicians can expect this region to support normal bonding for restorative materials such as resin-based composites whereas adhesion in hypomineralized regions of enamel may be compromised.

In an attempt to explain why the mechanical properties of hypomineralized enamel differ so significantly from sound enamel, microstructural studies have been completed using both scanning electron microscopy (SEM) and transmission electron microscopy (TEM). SEM uses the reflection of a beam of electrons that are scanned across the surface of a specimen reflected to form an image. It allows detailed three-dimensional analysis of the surface of a given specimen. TEM allows for higher resolution by transmitting a beam of electrons through an ultrathin specimen. Depending on the composition and thickness of the specimen, some of the electrons are scattered and disappear and the unscattered electrons hit a fluorescent screen, which can be photographed or visualized directly. This allows investigation to a higher resolution than light microscopy and SEM.
The microstructure of sound enamel confirms its well-organized rod architecture and well-defined borders with narrow inter-rod regions without defects or porosities [10]. This also applies to the clinically normal looking, sound cervical enamel of MIH teeth. Under SEM, the affected enamel does show some of the basic architecture of the enamel rods, but there is always a varying degree of disorganization with increased porosities [9–11]. In moderately affected areas, the boundaries between the enamel rods are somewhat blurred, and the crystals are not tightly packed. In the more severely affected areas, the rods are very thin with wide gaps in between containing what appears to be organic material. The border between the normal cervical enamel and the affected occlusal part is always distinct. This can give clinicians further confidence when extending adhesive restorations onto the clinically normal-looking cervical enamel.
TEM studies of hypomineralized enamel are difficult to do as they require very thin samples for analysis. However, a few studies have been reported in which the higher magnification associated with TEM has allowed visualization of individual crystals within the enamel. TEM imaging of sound enamel shows that the apatite crystals are well organized with elongated crystals running along the long axis of the enamel rods. The rod sheaths are barely distinguishable and the organic material in this region is minimal. In contrast, TEM images of hypomineralized enamel have shown that this enamel is more porous and the crystals more loosely packed. The rod sheaths also show increased porosity making the sheath significantly wider than in sound enamel (see Fig. 6.5) [12
Only gold members can continue reading. Log In or Register to continue