Macro interlock Connection between components such as the abutment-to-implant connection that possesses visible (macro) interdigitating or interlocking features.

Macromotion Motion that is substantial in nature. It is generally applied to the implant body in situations where implant stability is lacking at the time of placement or as a result of loss of osseointegration.

Macrophage Any of a variety of forms of mononuclear phagocytes in tissues. Derivative hematopoietic stem cell in bone marrow. Relatively large cell with round or indented nucleus, well-developed Golgi apparatus, many endocytotic vacules, lysosomes and phagolysosomes, and a plasma membrane covered with microvilli.

Macrophage-derived angiogenic factor (MDAF) Macrophage-derived factor that promotes proliferation of new blood vessels. It is released by hypoxic macrophages at the edges or outer surfaces of wounds and initiates revascularization in wound healing.

Magnet Certain metals or ferromagnetic alloys that demonstrate an attractive or repulsive force between these materials.1,2 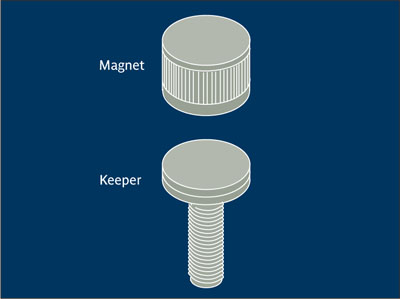 Magnetic attachment.
(Redrawn from Staubli and Bagley3 with permission.)

Magnetic resonance imaging (MRI) Imaging that uses magnetic fields and radio waves to produce high-quality two- or three-dimensional images without use of ionizing radiation (x-rays) or radioactive tracers. During an MRI, a large cylindrical magnet creates a magnetic field around the patient through which radio waves are sent. Medical MRI most frequently relies on the relaxation properties of excited hydrogen nuclei in water. The vast quantity of nuclei in a small volume sum to produce a detectable change in a magnetic field, which can be measured from outside the body. When the magnetic field is imposed, each point in space has a unique radiofrequency at which the signal is received and transmitted. Sensors read the frequencies and a computer uses the information to construct an image.

Malpositioned implant Atypical or faulty position of an implant, rendering it nonusable for restoration. Implant placed incorrectly within the dental arch or prepared site so as to compromise its use.

Malpractice litigation Legal proceeding in a court or a judicial contest to determine a dereliction from professional duty or a failure to exercise an accepted degree of professional skill or learning by one rendering professional services that results in injury, loss, or damage.4

Mammalian collagenase Proteolytic enzyme that degrades native collagen. After initial cleavage, less-specific proteases will complete the degradation. Collagenases from mammalian cells are metalloenzymes and are collagen-type specific (collagenase 1, collagenase 2, and collagenase 3). They may be released in latent form (proenzyme) into tissues and require activation by other proteases before they will degrade fibrillar matrix. They are involved in the degradation of collagen during tissue repair or during embryonic and fetal development. Called also interstitial collagenase.

Mandible Lower jaw consisting of the horizontal body and two perpendicular rami that end in the coronoid and condylar processes. The condyle articulates in the temporal fossae with the temporomandibular joint.

Cancer-related discontinuity defects of the m. Defects resulting from mandibular or maxillary tumor resection that require extensive reconstruction. This can be accomplished simultaneously with the resection or in a staged approach. Either vascularized or free grafts are utilized.

Mandibular block graft Intraoral source of autogenous block graft taken from the patient and fixed to a defect site. The block may be harvested either from the ramus buccal shelf or the mandibular symphysis.

Mandibular canal Bone canal of the mandible in which the inferior alveolar nerve and accompanying vessels are housed.

Mandibular foramen Foramen located at the medial aspect of the ramus where the inferior alveolar blood vessels and nerve enter the mandible. 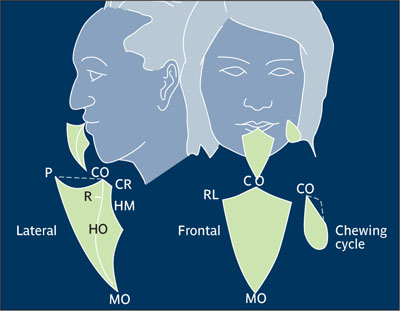 Marginal gingiva Most coronal portion of gingiva that surrounds the tooth but is not directly attached to the tooth surface. A healthy gingival margin forms the wall of the gingival sulcus. Called also free gingiva and gingival margin.14 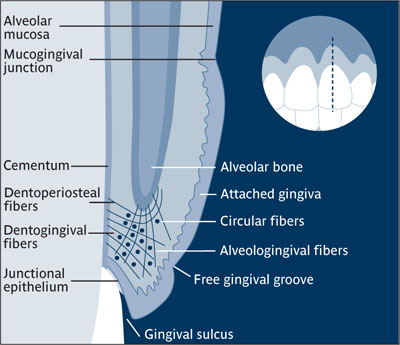 Marginal peri-implant area That region surrounding the gingival crest adjacent to an oral implant including the interimplant gingival tissue.

Marrow cavity Central portion of bone between the cortices where marrow is formed.

Master (definitive) cast Final cast used for the fabrication of a prosthesis.10,16

Master impression Negative likeness acquired for the fabrication of a cast on which a prosthetic restoration is produced.10,11,17

Materia alba Loosely adherent, white curds of matter composed of dead cells, food debris, bacteria, and other components of the dental plaque that lack the organized structure of a biofilm and are found on tooth or oral implant prosthesis surfaces.

Matrix Extracellular substance in which tissue cells (eg, of connective tissue) are embedded. Formative cells or tissue of a fingernail, toenail, or tooth. Mass by which something is enclosed or in which something is embedded (organelles suspended in the cytoplasmic matrix).

Maxilla Paired bone making up a large part of the facial skeleton, including the body of the maxilla and the frontal, palatine, alveolar, and nasal processes.19 See also: Resorbed maxilla.

Computed tomography imaging of the m. Series of 25 to 45 1-mm axial scans to image the maxilla. For radiation protection, the examined area should be restricted to the region of interest. In implant dentistry, 25 1-mm axial scans have proven sufficient. Effective radiation dose for this examination should range from 2.5 mSv to 6 mSv and, not exceed this value.