Locoregional Recurrence and Its Management

33 Locoregional Recurrence and Its Management

Epidemiology and Risk Factors for Recurrence

Salvage Surgery with Limited Excision in the Parotid Area

Salvage Surgery in the Submandibular Triangle

Owing to its low incidence, salivary gland cancer is classified as a rare disease, and even for primary tumors, recommendations for the treatment and management of the condition cannot be made with a high level of clinical evidence. There is a similar lack of high-level evidence for the treatment of locoregional recurrences of salivary gland cancer. In addition, the location of primary and recurrent tumors has a considerable influence on the clinical behavior of the lesion and the treatment strategy. Recurrences in different primary sites—i.e., the parotid gland, submandibular gland, and minor salivary glands—therefore need to be considered separately. Another factor that has to be taken into account is the diversity of behavior observed in recurrent tumors, depending on their histological subtype. Differences in the histological subtypes, with varying degrees of aggressiveness, strongly influence decision-making regarding treatment. In general, the overall prognosis for patients who develop recurrent salivary gland cancer is poor. The chances of salvage treatment are often limited by the proximity of the recurrent tumor to critical structures such as the eye, nerves, brain, and essential arteries, restricting or limiting the degree of surgical radicality that is possible, as well as radiotherapeutic options. In addition, a large proportion of patients will have previously received radiotherapy as part of the primary treatment. These factors increase the risk of complications during and after revision surgery—some of which may be severe and life-threatening, and associated with lifelong morbidity.

In principle, surgery, radiotherapy, and repeat radiotherapy are the treatment options currently available in the management of local and regional recurrences of malignant salivary gland tumors (Fig. 33.1). Treatment with curative intent is possible in approximately one-third of patients with recurrent salivary gland cancer. In operable recurrences, surgery should be the first option offered. Decisions on whether to offer patients repeat radiotherapy should only be taken on an individualized basis, as few data are available on the results of such treatment. If surgery or radiotherapy is not feasible, palliative chemotherapy may be considered. Overall, the results of repeat treatment for salivary gland cancer are poor; fewer than 10% of the patients are alive and tumor-free 5 years after treatment for recurrent tumors. 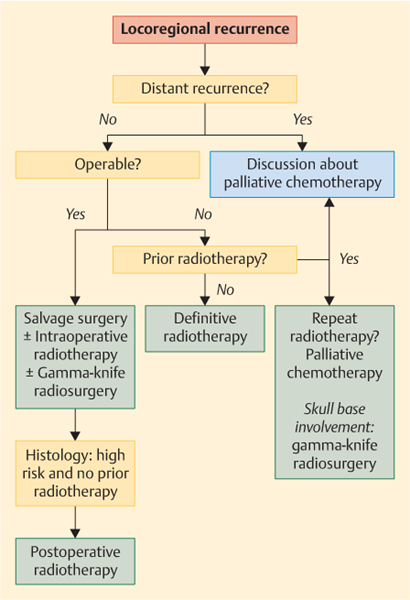 Decisions on how to treat a locoregional recurrence of salivary gland cancer should be taken on an individualized basis in each patient. No evidence-based guidelines are available. Surgery is the best treatment option if possible.

Epidemiology and Risk Factors for Recurrence

Due to the low incidence of submandibular gland cancer in comparison with the parotid gland, little is known about the clinical behavior of recurrent lesions. The risk of local primary recurrence is reported to be seven to eight times higher than for minor salivary gland cancers.

The risk factors for locoregional recurrence of salivary gland cancer are the same as in other types of head and neck cancer: advanced stage, positive margins after primary surgical treatment, and perineural and vascular invasion. Minor salivary gland cancers arising in the nasal cavity and paranasal sinuses are associated with a higher probability of recurrence than equivalent tumors in the oral cavity.4 Overall, there is a greater risk of primary-site recurrence with adenoid cystic carcinoma than with mucoepidermoid carcinoma in the nasal and oral cavities.

Any new mass in the area of a previously treated primary salivary malignancy, irrespective of its anatomic site, must raise a strong suspicion that the tumor has recurred. Any additional or new process such as a neck mass should also be considered suspicious for regional extension, or—if it has been treated previously—as a probable cervical nodal metastasis. Typically, most patients detect the neck mass themselves, or it may be detected by neck palpation during routine follow-up examinations. Negative prognostic indicators are the persistence or development of pain in the area treated, or the development of palsy affecting cranial nerves V or VII or also including other cranial nerves such as X, XI, and XII, either singly or in combination.

In patients who present with recurrent salivary gland cancer, it is vitally important to have their previous case records available regarding the treatments administered, dosage and duration, and surgery and/or radiotherapy elsewhere or before the current referral. If the patient has been referred from elsewhere, it is preferable to speak to the surgeon personally, as the notes not infrequently do not include a detailed account of every step of the operation. If radiotherapy has been administered, then speaking to the radiotherapist concerned is also helpful for later treatment decisions. Reports on previous surgical treatment are particularly valuable, as they should provide information about the extent of the previous operation and any adjuvant treatment for the primary disease.

The size and shape of the skin incision is helpful for estimating the extent of the previous operation, particularly if a surgical report is not available. If patients confirm that they had transient facial palsy or if they have a persistent facial nerve deficit following the previous operation, the risk for further facial paralysis after a revision procedure is already increased by more than 25%. However, the patient still has to undergo complete diagnostic staging in the same way as for primary disease (see Chapter 28). Fine-needle aspiration cytology can help confirm the original pathological diagnosis again. If there is any doubt about the presence of a recurrent malignancy, an open biopsy is essential. If the recurrent tumor is a circumscribed lesion and surgical treatment is planned, then using frozen sections during single-stage definitive treatment is preferable to a two-stage procedure involving open biopsy first and surgical treatment later.

The diagnostic work-up for patients with locoregional recurrence of salivary gland cancer includes:

Examination: where is the mass located? Is it possible to distinguish between local and regional recurrence? Does the patient have pain, facial palsy, or a scar or sequelae from the previous treatment?

Complete tumor staging: sonography of the neck, chest radiography/computed tomography (CT), or magnetic resonance imaging (MRI) of the neck and tumor region. The value of positron-emission tomography (PET) or PET/CT for salivary gland cancer is unclear.

Surgery is the first-choice treatment for operable locally recurrent malignant tumors (Fig. 33.1). Treatment with curative intent is usually limited when malignant recurrence has infiltrated the skull base or the carotid artery. Recurrent adenoid cystic carcinoma deserves special attention, as the patients have a long overall survival, even if the lesion is associated with distant lung metastases. Radical local salvage surgery may be indicated (see Figs. 33.2 and 33.5).

The patient should receive information in the same way as for primary surgery (see Chapter 30). Revision surgery is associated with an increased risk of temporary or permanent facial nerve palsy. This is due not only to manipulation of the nerve during the operation, but also to the fact that parts or segments of the nerve may have to be resected during the operation, which may not have been anticipated, thus adding to the risk of facial nerve palsy. The majority of patients develop at least some degree of nerve weakness. More than 25% of the patients develop permanent weakness in at least some of the facial nerve branches. The surgical strategy for excision of recurrent malignant tumor in situations in which the tumor is attached to facial nerve branches or is infiltrating nerve branches (even when preoperative clinical nerve function is normal) has to be explained and clarified to each patient. When the operation is being carried out with curative intent, it has to be radical (surgery with clear margins)—i.e., nerve branches that are infiltrated have to be resected. Informed consent needs to be obtained beforehand so that facial nerve reconstruction can be carried out at the same time (see Chapter 38).

General anesthesia is essential for the surgical treatment of recurrent salivary gland cancers, as the extent and duration of the surgery cannot be accurately anticipated. If only selected excision of a very small malignant recurrence is planned, then local anesthesia may be an alternative to general anesthesia (this is extremely rare, however). The patient is placed in a supine position with the head rotated to the opposite side to the side selected for surgery in the parotid, submandibular, and neck area.

The possible complications are the same as in primary operations, but the risk is greater (see Chapter 29).

Special measures are discussed in Chapter 39.

Particularly in patients with multiple focal tumor recurrences, all palpable tumor nodules should be marked on the skin in the awake and conscious patient before the operation. During surgery, these marks can help with identification and exploration of the surgical site, which is likely to result in a complete and more comprehensive resection.

All surgical anatomic landmarks outside the likely scar area should be identified first, especially when dissecting the facial nerve. Dissection for nerve identification should start from areas or regions that have not been disturbed in the previous operation—i.e., one should move from undisturbed areas into areas previously operated on.

During salvage surgery, electromyographic facial monitoring is not reliable. If electrostimulation produces responses, it is good. However, if no electromyography responses are seen, it does not rule out facial nerve involvement or invasion by tumor. Due to the scar tissue around the nerve resulting from the previous dissection, the threshold for stimulating the nerve may be much higher than normal, or nerve stimulation may even not be possible.

One should be aware that facial nerve monitoring only monitors the facial muscles into which needle electrodes have been inserted. It does not provide information about the whole hemiface.