Treatment of the Node-Positive Neck

Treatment of the Node-Negative Neck

It has been shown in several studies that neck metastases in patients with salivary gland carcinomas (Fig. 32.1) are associated with a poorer prognosis. In 1975, Spiro et al.1 described the prognostic significance of nodal metastases in parotid carcinomas. In this series, the 5-year survival rate declined from 75% to 10% in patients with nodal disease. Bhattacharya et al.2 analyzed the impact of node metastases on survival in 1268 patients with major salivary gland carcinomas. They compared patients with and without histological evidence of node disease and concluded that the presence of positive nodes decreased the mean survival by more than 50%. In an analysis of 207 patients with carcinoma of the major salivary glands who were treated exclusively with surgery, the univariate analysis showed that the N stage was the only clinical and pathological variable that had an impact on the 10-year survival. The rate was 24% for patients with pathological evidence of nodal disease versus 67% for patients whose lymph-node status was negative or unknown (P = 0.001).3 In a review of 40 cases,4 including parotid gland (n = 31) and submandibular gland (n = 9) cancers treated surgically with neck dissection, the 5-year overall survival rates for patients with and without histological evidence of neck disease were 40% and 63%, respectively (P < 0.05). 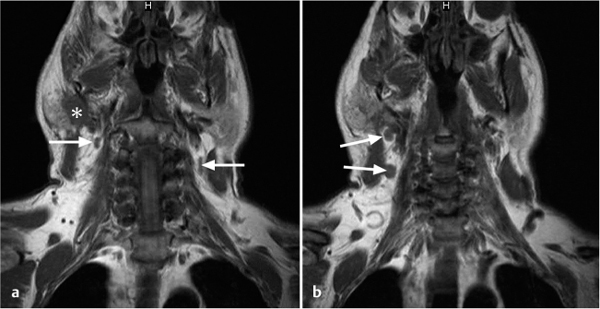 Fig. 32.1 a, b Magnetic resonance images in a patient with a parotid tumor (*) and facial palsy on the right side, with several enlarged cervical lymph nodes (arrows). A radical parotidectomy, facial nerve reconstruction, radical modified neck dissection on the right, and selective neck dissection on the left side was performed. Histology confirmed parotid carcinoma, pT4pN2cM0.

Patients with salivary gland carcinomas also have an increased risk of developing distant metastases if they present with nodal disease.5,6 In a retrospective study, it was shown that the subsequent development of distant metastases was significantly higher in the presence of tumor positive lymph nodes—68.2% with positive nodes versus 23.7% without positive nodes (P = 0.007). There was also evidence that the number of involved lymph nodes has prognostic significance. Patients with more than two positive lymph nodes had a higher risk of developing distant metastasis than those with only one positive cervical lymph node (P = 0.014).6 In addition, the multivariate Cox proportional hazard analysis, taking a series of prognostic variables into account, demonstrated that clinical stage (including tumor size, local aggressiveness, and lymph-node involvement) and tumor infiltration of the facial nerve were the most important factors for predicting the risk of distant metastasis.6

Cervical lymph-node metastases have a major impact on the prognosis and are associated with an increased risk of developing distant metastases.

The incidence of lymph-node metastases in patients with parotid carcinomas at the time of the initial presentation has been reported to be in the range of 13%–28% (Table 32.1).7–13 The reported incidence varies from 15% to 39% for submandibular malignancies5,14–17 and from 13% to 22% for the minor salivary glands.5,15,16 However, the average frequency of regional metastases varies considerably depending on the histological type9,17–20 (Table 32.1). When considering the rates of clinically detectable metastases in different tumor types, it needs to be borne in mind that three different World Health Organization (WHO) classifications have been published during the last few decades. In addition, the diagnostic methods used to detect lymph-node metastases differ considerably in the various publications.

Twelve percent of patients with T1 and T2 carcinomas had lymph-node metastases at presentation in a series of salivary gland cancers reported by Rodriguez-Cuevas et al.,15 and 20% in the series reported by Pedersen et al.18 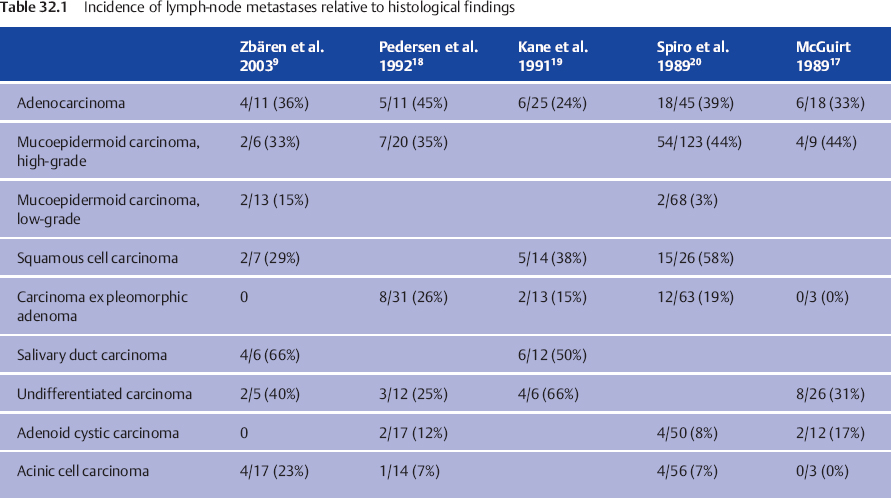 In a study of 99 patients with parotid carcinomas at the M. D. Anderson Cancer Center at the University of Texas,22 univariate analysis showed that positive nodal disease was significantly more likely when there was facial nerve paralysis, extraparotid extension, and perilymphatic invasion. In a study at the Memorial Sloan-Kettering Cancer Center in New York,13 logistic regression analysis showed that tumor grade and tumor size (T) were predictive factors for positive occult lymph-node metastases. Several studies have also shown that the histological tumor type is an important factor for predicting occult metastases. Anaplastic carcinoma, squamous cell carcinoma, and salivary duct carcinoma are associated with occult metastases in more than 50% of cases.10,22,23 However, occult metastases are also detected in low-grade carcinomas10 and T1 and T2 carcinomas.24 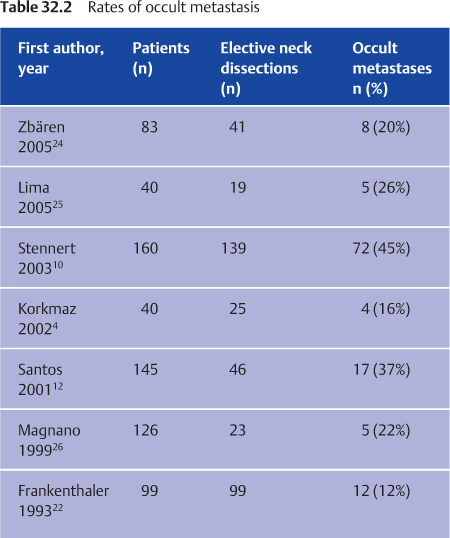 Various methods are used to determine the rate of positive occult nodal disease. Reported rates may represent percentages of all patients treated, percentages of patients with cN0 with or without neck dissection treatment, or percentages of patients with cN0 and treated with elective neck dissection. Table 32.2 lists reported rates of occult metastasis in cN0 patients treated with elective neck dissection, ranging from 12% to 45%.4,10,12,22,24–26 It should be borne in mind that many series of salivary gland cancers present data collected over the course of several decades. It is possible for time-dependent diagnostic biases to surface during such lengthy periods of study—for example, due to the use of imaging examinations in comparison with neck palpation alone. Imaging studies improve the clinical staging and are currently used routinely in many centers. In addition, most studies are retrospective, and the neck dissection specimens are not processed in a standardized manner (e.g., on the basis of a minimum number of analyzed nodes and number of cuts per node). Reported rates of occult metastasis consequently vary widely depending on the method of evaluation.

Regional recurrence rates in the range of 8%–15% are reported (Table 32.3).1,9,12,27,28 Unfortunately, it is usually not possible to determine the rate of regional recurrence on the basis of the “locoregional failure rates” mentioned in many articles. There is a paucity of data focusing specifically on neck failure rates following the treatment of salivary cancers. Equally few data are available about subsequent salvage rates.

Neck recurrences develop more often in untreated than in electively treated cN0 necks.24,27 Most recurrences tended to occur within the first 3 years.5,9 Chen et al.27 found that 23 of 24 neck recurrences of salivary gland cancers occurred in levels I–III. Only one neck recurrence was observed in level IV and none in level V. All recurrences developed in patients whose necks were not treated (either with neck dissection or radiotherapy). Twenty-one of the 24 relapses occurred in patients with T3 or T4 disease. The highest crude rates of nodal relapse were found in patients with squamous cell carcinoma, undifferentiated carcinoma, adenocarcinoma, and mucoepidermoid carcinoma.27 In another study,24 seven neck recurrences developed in 42 cN0 patients with parotid carcinoma without initial elective neck treatment. Only two of the seven relapses developed in T3 or T4 carcinomas. All except one were high-grade tumors (salivary duct n = 2, high-grade mucoepidermoid carcinoma n = 3, undifferentiated carcinoma n = 1). The highest regional recurrence rate is observed in salivary duct carcinoma, squamous cell carcinoma, and adenocarcinoma not otherwise specified (Table 32.3). According to Teerhard et al.,29 “the salvage rate of locoregional recurrence is low. Therefore the goal of therapy should be initial locoregional control.”

Neck recurrences are observed in 8%–15% of cases, mostly in patients with high-grade carcinomas with initially untreated necks.

Treatment of the Node-Positive Neck

Postoperative radiotherapy in the neck is recommended when there is evidence of multiple lymph-node involvement, multiple levels of nodal involvement, extracapsular or soft-tissue extension, and when there are any nodes larger than 2 cm.13,15,22

Necks with lymph nodes that are clinically positive for metastatic disease are treated with radical or modified radical neck dissection; selective neck dissection may be appropriate in selected cases.

Treatment of the Node-Negative Neck

Most authors routinely suggest removing the primary-echelon lymph nodes or performing an elective neck dissection of levels I–III in submandibular gland carcinoma.14,36,37 However, there is controversy regarding the current management of clinically negative neck nodes in patients with parotid carcinomas. Management options for a node-negative neck in patients with parotid carcinomas include observation, elective neck dissection, and elective irradiation.

In the 1950s, it was thought that all types of parotid gland carcinoma were best treated with radical tumor excision in combination with a radical neck dissection. In the following decades, a more differentiated view on the treatment of the node-negative emerged. Other authors argued that elective treatment of the neck is appropriate only when the risk for occult metastasis is high.13,20,22,38 The tumor characteristics most often described as being associated with a relatively high risk for occult metastasis, indicating elective neck treatment, are high grade, T3/T4 tumors, preoperative facial paralysis, age > 54 years, extraparotid extension, and perilymphatic invasion.20,39

There are two main arguments to justify elective neck dissection in all parotid carcinomas: the rate of occult metastases ranges from 12% to 45% (see Table 32.2) and the precise histological tumor type and tumor grade are not known at the time of surgery in many cases.