Treatment of the Cervical Nodes

Results of Local and Locoregional Radiotherapy

Determination of the Radiation Fields

Side Effects of Radiotherapy

Salivary gland malignancies are traditionally treated with surgery, with postoperative radiotherapy if there are unfavorable prognostic factors for locoregional recurrence.1 In the past, salivary gland tumors were considered to be resistant to radiotherapy.2 However, even in patients with medically and/or technically inoperable disease, primary radiotherapy can be regarded as an option for curative treatment. In addition to conventional photon and electron therapy, particle therapy as a primary treatment for malignant salivary gland tumors may enhance the locoregional cure rates in advanced cases. This chapter discusses prognostic factors, with special emphasis on the value of the new histological subclassification, comorbidity, and indications for primary and postoperative radiotherapy for malignant salivary gland tumors. Several radiation techniques are outlined.

The decision on whether to proceed with postoperative radiotherapy after curative surgery for salivary gland cancer depends on the prognostic factors in the individual patient. As radiotherapy targets possible local and regional tumor extension, the prognostic factors focus on locoregional tumor control. Several factors are discussed in detail in Chapters 25, 29, and 35.

Histological type was not found to be a prognostic factor in parotid gland cancer in the study by Vander Poorten et al. and was therefore not included in the prognostic score.7 In some publications, tumors are grouped into high-grade and low-grade categories. The low-grade category includes mucoepidermoid and acinic cell carcinoma, and sometimes adenoid cystic carcinoma.7,10,11 Grading was an independent prognostic factor for disease-free survival in some studies,10,11 but not all.7 This difference may be caused by the poor interobserver reproducibility for grading.12

In 1972, the World Health Organization (WHO) subdivided salivary gland malignant tumors into six subcategories (see Chapter 27 for more details on the classification of malignant salivary gland tumors), with a category of adenocarcinoma, not otherwise specified (NOS). The latter category was subdivided into 10 subcategories in the WHO 1991 classification.13 A new WHO classification was recently published including four extra subtypes.14 The histological subtype (WHO 1972) may be predictive of distant metastases,3 but not of locoregional control.3,10,15–17 A major reason for this may be the high percentage of patients with poor prognostic factors who receive postoperative radiotherapy, probably improving locoregional control.

Salivary duct carcinoma is a high-grade tumor, predominantly seen in male patients and located in the parotid gland. It resembles ductal carcinoma of the breast. These lesions are frequently positive for androgen receptor, HER-2/neu, and p53.14,18 Expression of HER-2/neu and p53 is associated with early recurrences, distant metastases, and poor survival.18 The 5-year disease-free survival in the Dutch study was only 14%, with a cumulative 5-year risk for local and regional recurrence of 30% and for distant metastases of 80%.

The aggressiveness of this tumor justifies, in addition to extended surgery even in patients with T1 lesions, ipsilateral functional neck dissection and postoperative radiotherapy.18,19 Brandwein-Gensler et al. reported on a series of 16 patients, 15 of whom had tumors in the parotid gland representing a low-grade salivary carcinoma with a primarily in situ intraductal process. All of the patients who underwent surgery had a disease-free survival.20 However, low-grade salivary duct carcinoma might possibly be better classified as low-grade cribriform cystadenocarcinoma.14

Polymorphous low-grade adenocarcinoma is predominantly seen in female patients and located in the minor salivary glands of the palate. In the Dutch study, no distant metastases were seen in 34 patients, and the disease-free 5-year survival was 84%; nine of the 34 patients were treated with postoperative radiotherapy. Castle et al. published a large series including 164 patients with polymorphous low-grade adenocarcinoma with a long follow-up period.21 Conservative complete surgical excision was the treatment of choice, with postoperative radiotherapy in only 10% of the patients. The recurrence rate was only 9%, and recurrences were more frequently seen in tumors of the hard palate. In a series of 40 patients, Evans et al. compared the local recurrence rates in patients with polymorphous low-grade adenocarcinoma and positive or unknown surgical margins.22 No recurrences were seen in nine patients who received postoperative radiotherapy, in comparison with 10 recurrences among 13 after who received surgery alone.

Epithelial–myoepithelial carcinoma is predominantly found in the parotid gland, with an equal male/female distribution. All 14 patients in the Dutch study remained free of locoregional recurrences, and 11 received postoperative radiotherapy. Distant metastases were seen in only one patient, indicating low-grade disease. Savera et al. analyzed 25 patients exclusively with myoepithelial differentiated carcinoma. Ten of the lesions were cytologically high-grade and 15 were low-grade. Only six of the patients received postoperative radiotherapy. Distant metastases and locoregional recurrences were seen in almost 50% of the cases. The authors noted that the diagnostic criteria for myoepithelial carcinoma may be confusing, making it difficult to distinguish from malignant mixed tumors and epithelial–myoepithelial carcinoma.23

Basal cell adenocarcinoma is typically located in the hard palate, rarely with metastases to the cervical neck nodes. This is a low-grade tumor, but local recurrences are frequently seen. Postoperative radiotherapy is indicated when the resection margins are incomplete or close.24

Malignant oncocytoma is mainly located in the parotid gland. In a review of the literature including 36 cases, the local recurrence rate with surgery alone was 40%, and a combination with postoperative radiotherapy significantly improved local control.25

Mucinous adenocarcinoma is a rare, high-grade malignancy, mainly found in the palate and floor of mouth, with a high risk for positive cervical neck nodes and distant metastases.27

Sebaceous carcinoma is also a very rare disease, mostly located in the parotid gland; it is slow-growing and is considered to be low-grade.28

In conclusion, several new histological subcategories of salivary gland carcinomas have been described. Although the prognosis varies considerably between these subtypes, the histological typing can be very difficult, even for experienced pathologists. In most studies, histological subtype is not an independent predictive factor for locoregional control; other pathological parameters, such as the status of the resection margins, bone invasion, and perineural invasion are more important.

In contrast to other types of head and neck cancer, smoking and alcohol abuse are not associated with salivary gland malignancies. Tobacco and alcohol consumption is associated with pulmonary, cardiovascular, hepatic, and metabolic diseases. Comorbidity is therefore less frequently seen in salivary gland cancer in comparison with squamous cell carcinoma of the head and neck.29 In some studies on the treatment of head and neck cancer, comorbidity is an independent prognostic factor for recurrences.30

Comorbidity can be scored using the Adult Comorbidity Evaluation-27 index (ACE-27). This is a validated 27-item list, graded into four levels ranging from no comorbidity (0) to mild (grade 1), moderate (grade 2), and severe (grade 3). Comorbidity, particularly grades 2 and 3, is a predictive factor for major complications after head and neck surgery, overall survival, and, in some studies, for disease-free survival.31

The role of comorbidity in patients with salivary gland cancers was studied in a group of 613 patients in the Netherlands.29 The distributions of ACE-27 grades 0–4 were 64%, 19%, 12%, and 5%, respectively. Interestingly, the distribution of ACE-27 grades was equal for all histological subcategories except for squamous cell carcinoma in the salivary glands. Grades 1–3 were seen in two-thirds of patients with squamous cell carcinoma, compared with one-third for all other histological subcategories. In this study, comorbidity significantly influenced the overall survival, but not the disease-free survival.29 Comorbidity only played an important role in the choice of treatment in patients with grade 3; patients with grade 3 comorbidities received primary radiotherapy significantly more often in comparison with those with grades 0–2. On the other hand, postoperative radiotherapy was administered significantly less in those with grade 3 comorbidity (Table 30.1). In general, therefore, comorbidity should not influence the choice of treatment unless a patient has severe comorbidities.

Age has also been shown to be an important determinant in the choice of treatment. Derks et al. showed that patients over the age of 70 with advanced head and neck cancer received nonstandard treatment significantly more often in comparison with younger patients.32

In contrast to patients with other types of head and neck cancers, comorbidity in salivary gland cancer patients is low and has less impact on decision-making for adjuvant therapy. In general, however, the only important factor involved in changing the standard treatment is comorbidity.

Primary treatment of salivary gland carcinoma consists of surgery. In general, primary radiotherapy is reserved for patients who are unfit for surgery (ACE-27 grade 3), patients with inoperable disease, and patients with palliative cases who present with distant metastases. Indications for postoperative radiotherapy have been defined on the basis of negative prognostic factors for local control. The indications are close (< 5 mm) or incomplete resection margins, pathologically confirmed bone or perineural invasion, T3–T4 tumors, and recurrent disease.4,33–35 As mentioned earlier, a high-grade tumor is a relative indication.

Treatment of the Cervical Nodes

Neck dissection is the treatment of choice in patients with clinically positive cervical nodes. The indications for postoperative radiotherapy for the cervical nodes are the presence of positive nodes in the neck dissection specimen, close or incomplete margins, and complete paralysis of the facial nerve.3,6 In the Dutch study, independent prognostic factors for the presence of positive nodes were found to be T stage (T1 15%, T2 26%, T3 33%, and T4 33%), site of the primary tumor (oral cavity 9%, parotid gland 25%, submandibular gland 42%, pharynx/larynx 36%), and histology. Acinic cell carcinoma, adenoid cystic carcinoma, and carcinoma ex pleomorphic adenoma are low-risk, mucoepidermoid carcinoma is intermediate-risk, and squamous cell carcinoma and undifferentiated carcinoma are high-risk. 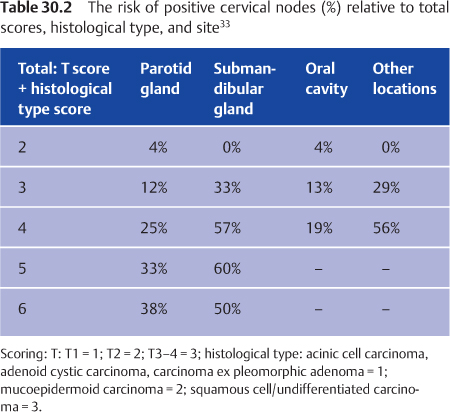 Curative neck radiotherapy: presence of positive nodes in the neck dissection specimen, close or incomplete margins, and complete paralysis of the facial nerve.

No elective treatment of the contralateral neck is indicated. 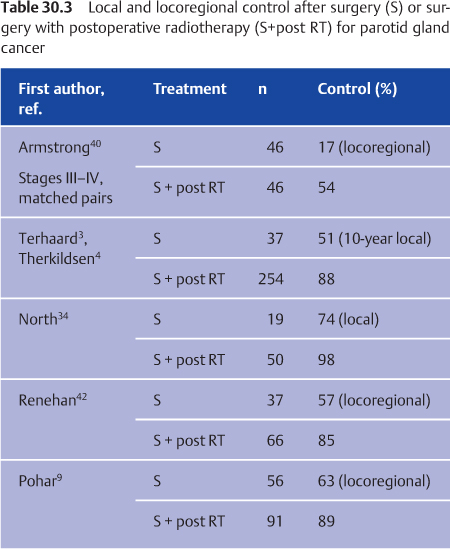 Another prognostically unfavorable factor is involvement of the skull base, as seen in some adenoid cystic carcinomas of the minor salivary gland.15 Postoperative radiotherapy, or primary radiotherapy in inoperable cases, is indicated.

Results of Local and Locoregional Radiotherapy

In the nationwide Dutch study, combined surgery and postoperative radiotherapy were generally administered for patients with negative prognostic factors. Despite this negative selection, postoperative radiotherapy resulted in significantly higher 10-year local control rates in comparison with surgery alone for patients with T3–T4 lesions (84% vs. 18%), close resection margins (95% vs. 55%) or incomplete resection margins (82% vs. 44%), bone invasion (86% vs. 54%), and perineural invasion (88% vs. 60%).33 However, for patients with none of these prognostic factors, surgery alone resulted in 90% local control, and combined treatment is not recommended. The relative risk for local recurrence with surgery alone, in comparison with combined therapy, was 9.7.3,33

There is a lack of prospective controlled studies, but on the basis of retrospective data, patients with salivary gland cancer and negative risk factors appear to benefit significantly from postoperative radiotherapy.