The dental functional diagnostic procedure determines the functional condition of the structures of the masticatory system. For patients with functional disturbances it serves to arrive at a specific diagnosis. For medical and legal reasons, it is necessary for all patients who are facing dental restorative or orthodontic treatment, even for those who are assumed to have no malfunction. Often no connection can be established between the clinical findings discovered through conventional methods (testing of active movements and muscle palpation) and the symptoms reported by the patient. For that reason, specific manual examination methods for the masticatory system have gained prevalence during the past 15 years. These focus on the so-called loading vector and recognize the capacity of biological systems for adaptation and compensation. A cause-targeted treatment is then indicated only when the caregiver knows which structures are damaged (loading vector) and the cause of the damage (the harmful influences). 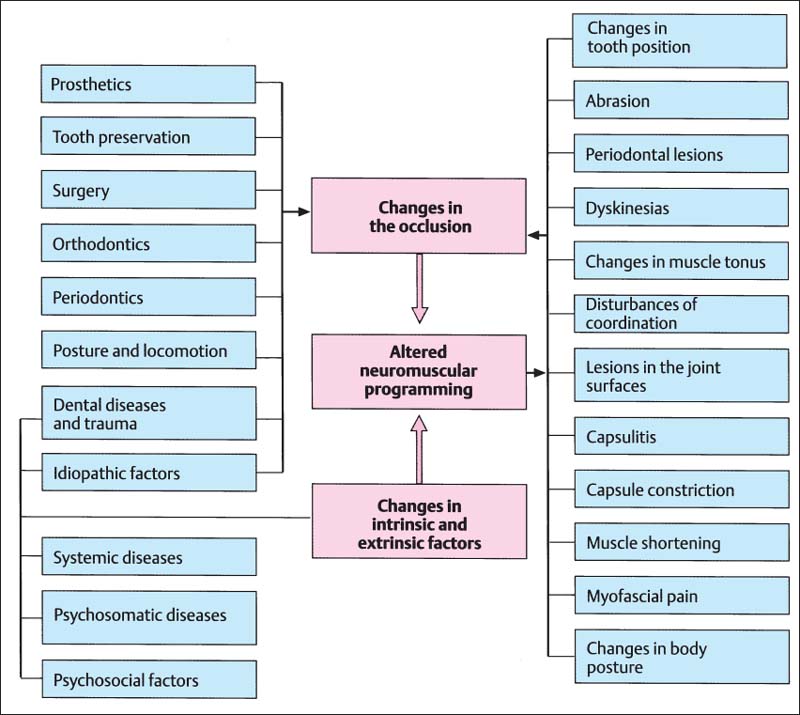 1 Possible causes and consequences of an altered occlusion

Idiopathic or iatrogenic alterations of the static or dynamic occlusion can influence the neuromuscular programming, and thereby affect other structures of the masticatory system. The same sequence of events can also be precipitated by intrinsic factors or other extrinsic factors. Usually during a clinical examination the changes listed in the right-hand column receive the most attention. But to plan a cause-targeted therapy it is necessary to determine what the specific causes of the altered neuromuscular programming are. A differentiated investigation protocol could set aside the old superficial philosophical discussion of the causes of functional disturbances within the masticatory system (“occlusion versus psyche”) in favor of an individualized patient analysis.

The Masticatory System as a Biological System

Every biological system, from a single cell to an entire organism, is continuously exposed to many influences. It overcomes these through two mechanisms:

• adaptation as a reaction of the connective tissues;

• compensation as a muscular response to an influence (Hinton and Carlson 1997).

Influences on the one hand and the capacity for progressive adaptation on the other may achieve a physiologic state of equilibrium. If, however, the sum of harmful influences during a given period of time exceeds an individually variable threshold, or if the adaptability of a system becomes generally diminished, the system will fall out of equilibrium. This condition has been referred to as decompensation or regressive adaptation (Moffet et al. 1964) and is accompanied by more or less severe clinical symptoms. Regressive adaptation of bone can be seen on radiographs (Bates et al. 1993), and in soft tissues it is expressed as pain.

Because the adaptability of a system is primarily a genetic factor and decreases with increasing age, the most effective therapeutic measures are those aimed at the reduction of the harmful influences. 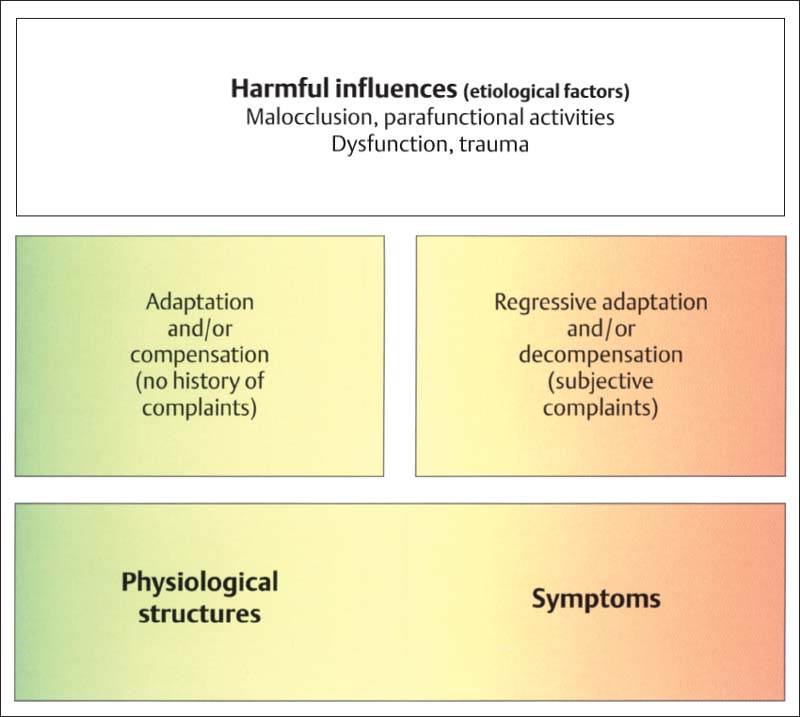 2 Fundamentals of the etiology of symptoms in the masticatory system

Every biological system is subjected to harmful influences of varying severity. The ones listed here represent only a selection of those which the dentist can demonstrate simply and repeatedly. These influences are assimilated by the system through progressive adaptation (connective-tissue reactions) or compensation (muscular reactions). As long as a system remains in this state, the patient will report no history of symptoms or functional disturbances. Only when the damaging factors exceed a certain threshold does regressive adaptation, or decompensation, accompanied by destructive morphologic changes and/or pain begin. By the time a patient comes to the dental office with symptoms, not only must severe influences already be present, but the mechanisms for adaptation and compensation must already be exhausted.

3 Equilibrium between influences and adaptation/compensation

A healthy biological system can be compared with a balanced set of one side are countered by the individual’s capacity for adaptation and compensation. The adaptive and compensatory mechanisms are genetically determined and therefore remain relatively constant, except for a gradual decline with age. For this reason, the equilibrium can only be disturbed by change on the side of the influences.

The patient population of a dental or orthodontic practice can be divided into three groups:

• “Green” group: The masticatory structures are either physiological or have undergone complete progressive adaptation. These patients have no history of problems, nor do they experience symptoms during the specific clinical examination.