By the expression “instrumented analysis of jaw movements” is meant the dynamic tracing of mandibular movements and their diagnostic interpretation. According to our current understanding, this is a supplemental analytical element that provides limited information useful for complementing the patient history and manual functional analysis. Instrumented analysis of jaw movements is especially useful for:

• determining the joint values of the individual patient (curve and inclination of the condylar path, Bennett angle, course of the mediotrusive and laterotrusive tracks) for programming the joints of an articulator, and

• describing the paths of condylar movements during both active and manipulated mandibular movements, as well as for analyzing condylar displacements caused by the occlusion.

Every mandibular movement can be defined as a rotation around an imaginary stationary or moving transverse axis through the temporomandibular joints. This hinge axis, as a nearly constant element of mandibular function, forms the frame of reference for all joint-related registration methods (Le Pera 1964, Winstanley 1985).

If the imaginary axis of rotation of the mandible is determined exactly, then mandibular movements that are a combination of rotation and translation can be reproduced as a pure movement of the hinge axis. When corrected to the patient’s intercondylar distance (distance from the right to the left condyle) the tracing of hinge axis displacement corresponds to the true glide path. This is the basic principle of all hinge-axis-related registration systems.

Any procedure may be suitable if it can record mandibular movements in two or three dimensions and, depending upon the stringency of the diagnostic demands, in some cases also their speed. Electronic and computerized registration systems offer the possibility of convenient data storage. An additional advantage is that these can adjust measurements made outside the joints to conform to the intercondylar distance and thus correct the projected path tracings and render them as actural condylar translations. An important diagnostic benefit is the ability to directly compare movement paths that were drawn both with and without tooth contact (Slavicek 1981).

This assumes, of course, that the registration system is mounted independently of the occlusion (Kubein et al. 1979, Jänig et al. 1980, Slavicek 1981). The patient must be able to freely assume his static and dynamic occlusion and execute movements without interference from the recording apparatus. If the tooth-guided and non-tooth-guided paths of a defined movement (e.g, protrusion or mediotrusion) coincide, then the occlusion is exerting no clinically relevant forced guidance upon the temporomandibular joint. This can be considered evidence of occlusoarticular harmony. In addition, tracings of active and passive movements can be superimposed to complement the manual functional analysis.

With the aid of instrumented analysis of movements, disturbances in the course of mandibular movements and occlusion-induced displacements of the condyles can be verified earlier and with higher resolution than would be possible through clinical manipulation. Important from the legal standpoint is the ability to document and store graphically or electronically each patient’s movement patterns for later evaluation and comparison. 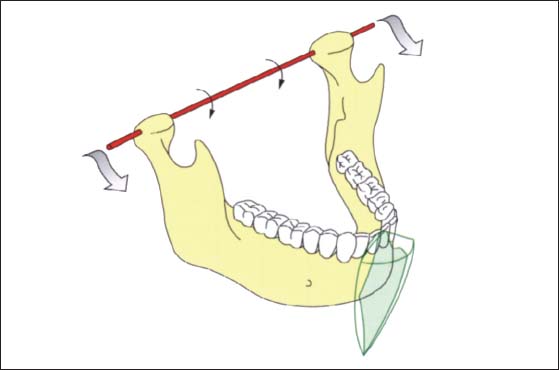 691 Transverse hinge axis of the mandible

The range of motion of any point on the mandible can be defined by the extent and coordination of rotation and translation of the transverse hinge axis (red). 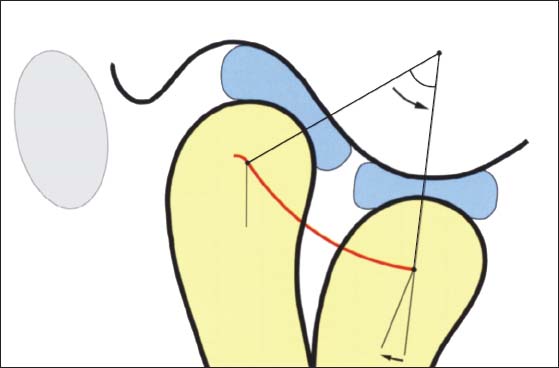 692 Principle of movement of the condyle in the sagittal plane

The temporomandibular joint can be described not just as a rotating and sliding joint, but also as a doubly rotating joint. One rotational movement of the condyles takes place around their functional transverse axis, while the other occurs as they orbit around a second axis located in the temporal bone (Kubein-Meesenburg 1985). 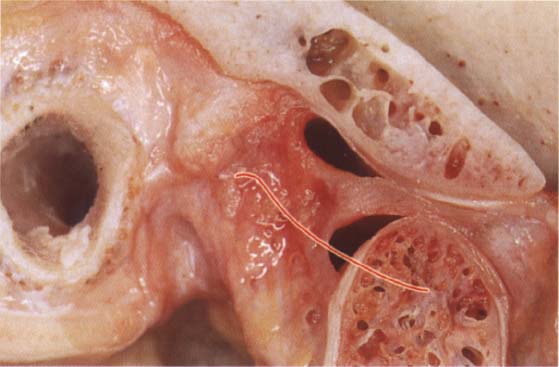 693 Anatomical preparation of a temporomandibular joint in protrusive condylar position

Macroscopic sagittal section of a human temporomandibular joint. The protrusive path of the hinge axis, represented by the red line, is largely determined by the radii of curvature of the contacting functional surfaces of the articular eminence, articular tubercle, and condyle.

The movement of any given point in the mandible can be defined by the magnitude and coordination of rotation and translation of the transverse hinge axis. The static and dynamic displacements of the mandible in the three dimensions of space must be recorded in their relation to defined measuring points on the hinge axis. Only in this way can the translatory movement of the mandible executed in combination with rotation be measured without paraxial distortion effects. In contrast to classic pantography, in which the mediotrusive and laterotrusive pathways were recorded on registration plates placed beside the axis, axiography permits spatial measurements of mandibular movements to be made from the hinge axis (Mack 1979, 1980). The tracings of movements are called axiograms. Axiography, with its mechanical tracings, serves primarily to gather data on the individual patient’s joints in preparation for programming the joints on the articulator. Usually, protrusive axiographic tracings are adequate for evaluation of the curvature and inclination of the sagittal condylar path. Measurement of the medial displacement of the mandible that accompanies lateral movements serves to determine the Bennett angle and the basic form of the Bennett movement of the mediotruding condyle (e.g. immediate side shift). The clinician should be able to find these same mediotrusive paths through additional manipulation. Only in this way can one document the condylar border movements that may be experienced by the patient during parafunctional activity. 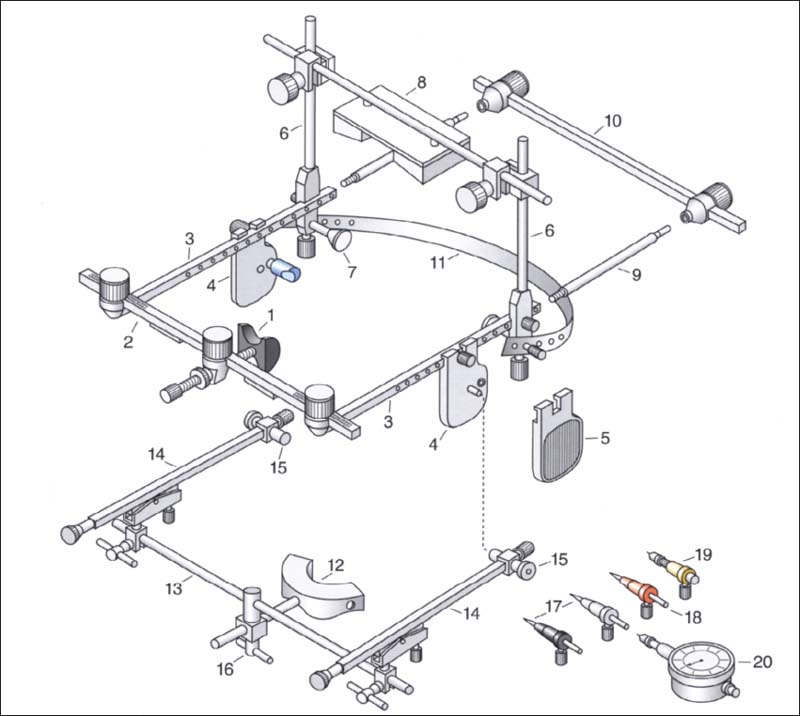 13 Anterior rod of the recording bow

14 Sidearm of the recording bow

After loosening the thumbscrews, the side-arms are pushed medially until the ear pieces of the alignment Flags are securely placed in the orifices of the ears.

Right: Placement of the ear pieces and the lateral alignment pins has defined an arbitrary hinge axis.

For tracing the movements relevant to the programming of the articulator it is usually adequate to use a tray clutch, which is closed on its occlusal surface, to attach the mandibular recording bow to the lower dental arch. This of course precludes registration of tooth-guided mandibular movements. If axiography is to also provide information on the influence of the occlusion upon the dynamic function of the temporomandibular joints, however, then the mandibular registration bow must be fixed to the buccal and labial surfaces of the lower teeth with a special adapter that leaves the occlusal surfaces free (Slavicek 1981).

The nasion relator is adjusted by means of the anterior thumbscrew clamp until the flag bow is held against the head.

Left: If necessary, the nasion relator can be prefitted with a little silicone putty.

The alignment of the flag bow to the skull is determined by the ear pieces and the nasion relator.

Left: Attaching the vertical rods for the mastoid and vertex supports.

The flag bow is fitted with a vertical rod on each side.

Left: The extension rods are screwed onto the side-arms. 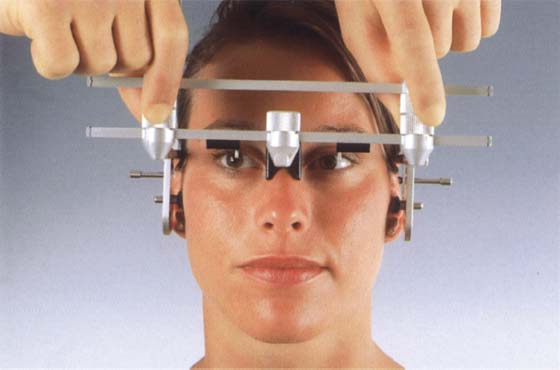 The previously adjusted posterior bar is slipped passively over the extension rods.

Right: The posterior crossbar further increases the rigidity of the flag bow.

701 Placement of the vertex and mastoid supports

The screw clamps of the vertex support are slipped over the vertical rods and, using light pressure, attached by tightening the thumbscrews.

Right: Finally the lateral mastoid supports are brought into flat contact with the skin and fixed in this position. 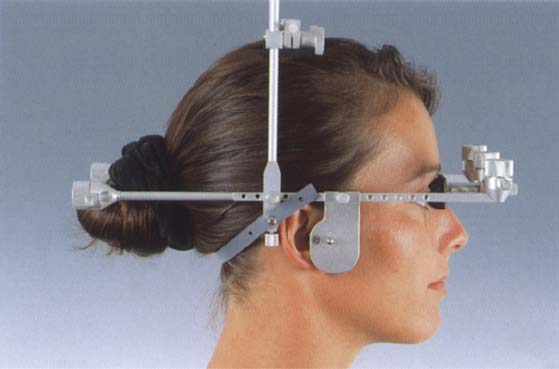 702 The assembled flag bow in place

The elastic band that is lightly stretched from one mastoid support to the other at the hairline gives the flag bow additional stability. The vertex and mastoid supports provide transverse stability to the flag bow so that now the posterior crossbar and the flag side-arm extension rods can be removed.

703 insertion of the tray clutch

Soft wax strips are placed inside the tray at the midline and along the lingual flange to serve as intentional fracture lines during removal of the tray after it is filled with impression plaster.

Right: To minimize interference with the occlusion, the tray clutch filled with impression plaster is aligned with the midline and seated until it rests against the chewing surfaces. The patient then closes against the tray in the retruded mandibular position until the plaster has hardened.

704 Preparation of the mandibular recording bow

Both side-arms are set in their sagittal planes at the zero mark and the vertical adjustment screws are brought to their middle positions. The alignment tubes are attached to the side-arms, and the side-arms are made parallel with one another.

Left: The side-arms are positioned on the anterior cross rod (near top of photograph) so that the alignment tubes rest securely, but without strain, in the seats milled into the sides of the thumbscrew damps of the posterior crossbar. The posterior crossbar has been previously adjusted on the patient.

705 Placement of the recording bow

Left: The alignment tubes are slid medially until they contact the alignment pins of the flag bow. 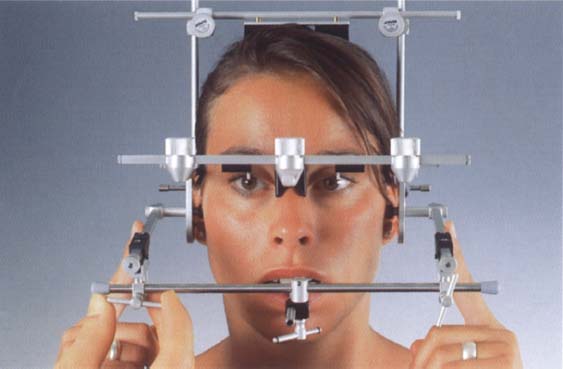 706 Fixation of the recording bow

While the side-arms are held so that the alignment tubes are in stable contact with the alignment flags, the recording bow is fixed to the posteriorly positioned mandible by tightening the clamps and thumbscrews. 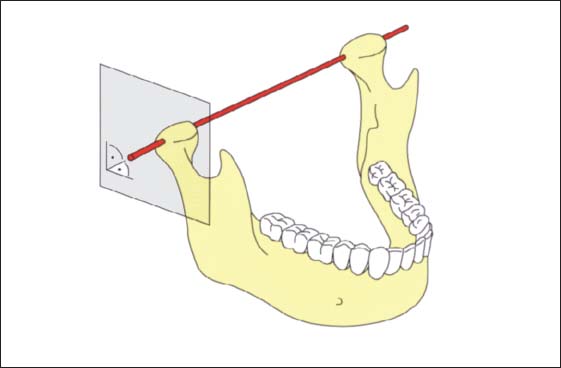 707 Ideal orientation of the recording surfaces to the tracing axis

An essential precondition for an artifact-free tracing of the hinge axis movements is that the recording surfaces be positioned perpendicular to the hinge axis in centric jaw relation (Lotzmann 1990b). 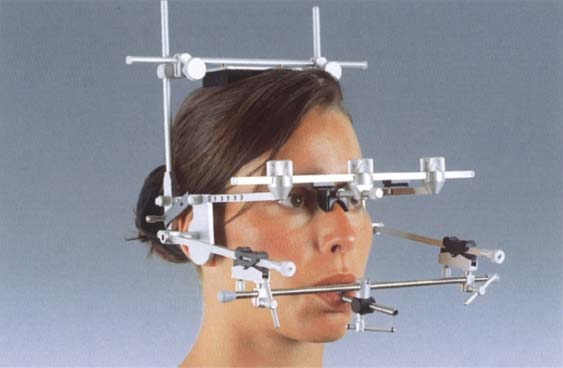 The principle of coaxial mounting of the Axiograph III automatically leads to correct orientation of the recording bow to the flag bow. 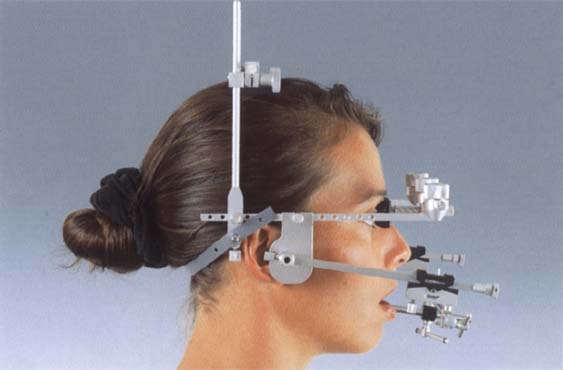 709 Lateral view of the flag bow and recording bow

The arbitrary hinge axis passes through the recording surfaces at right angles.