The most important aspect of a classification system is not that the divisions must be accepted by all practitioners, but rather that it contain specific diagnoses that are uniformly and consistently defined for everyone. This of course assumes that not only will uniform definitions be taught in the clinics and then put to use in clinical practice, but that they will also be employed in making decisions. For many decades collective terms such as “temporomandibular disorder” (Wright 1920, Goodfriend 1933), “Costen’s syndrome” (Costen 1956), “temporomandibular pain syndrome” (Schwartz 1956), “TMJ dysfunction syndrome” (Shore 1959), “pain dysfunction syndrome” (Voss 1964), “myofascial pain dysfunction syndrome” (Laskin 1969), “myoarthropathy” (Schulte 1970, Graber 1971), and “internal derangement” (Farrar 1972a) have been used as diagnoses. All of these terms, however, are too loosely defined and do not provide guidance toward a specific treatment.

More precise classifications are based upon tissue-specific symptoms (Fricton et al. 1989), etiological structural and functional disturbances (Laskin 1982), the frequency of their occurrence (McCarthy 1985), and upon existing medical classifications (Stegenga et al. 1989a, b, Okeson 1996). The correlation of dental classifications with those of general medicine presents three significant advantages:

• Recognition by the medical profession of functional disturbances of the masticatory system increases awareness of the need for a specific diagnostic system to differentiate these problems from other disorders in the head and neck region.

• Inclusion of masticatory disturbances within a larger medical classification increases acceptance of the necessity for treatment and the readiness for urgently needed interdisciplinary treatment.

• A medical framework facilitates the dissemination and acceptance of specific semantic definitions and specific diagnostic criteria.

The classification we use borrows some of its content from Bell (1986), Fricton et al. (1989), and Okeson (1996). This classification is also found in the guidelines of the American Academy of Orofacial Pain (Okeson 1996). In addition, it is a component of the widely accepted classification of the International Headache Society (1988). In this atlas we have made it a high priority that all definitions of tissue-specific diagnoses agree with the generally accepted national and international definitions. We define some of the diagnostic criteria even more specifically and strictly because manual functional analysis permits a highly specific differentiation.

This chapter, because of its practice-oriented focus, differentiates between primary and secondary (dysfunction-related) diseases. The primary diseases are often noticed during the clinical inspection and are confirmed essentially through imaging procedures. The secondary functional disturbances, on the other hand, usually require specific functional analytical procedures to arrive at a sure clinical diagnosis. The individual tissue-specific diagnoses are divided into arthrogenic and myogenic lesions and are arranged within these categories according to their structural characteristics (= damaged anatomical structures). The reader is already familiar with the latter from the chapters “Anatomy” and “Manual Functional Analysis.” For clearer understanding, the color coding of the anatomical structures has been retained.

Primary joint diseases include congenital and developmental alterations of the temporomandibular joints. Leading among these are hyperplasia, hypoplasia, and aplasia of the condyles, syndromes with temporomandibular joint involvement, and systemic diseases. Fractures and tumors are also included with these. In contrast to the function-related joint diseases, diagnosis and treatment is largely based on imaging procedures. The chief function of imaging procedures in everyday functional diagnosis is therefore to conclusively exclude primary joint diseases.

Naturally, a general clinical examination and inspection of the patient is conducted before arranging for imaging procedures. As a rule, a patient diagnosed with a primary joint disease in a dental or orthodontic practice is referred to a qualified center for treatment.

Because in many cases the etiology is apparent and the clinical symptoms are unequivocal, there are few contradictions in the literature regarding classification of primary joint diseases (Bell 1986, Kaplan and Assael 1991. Zarb et al. 1994. Okeson 1998). 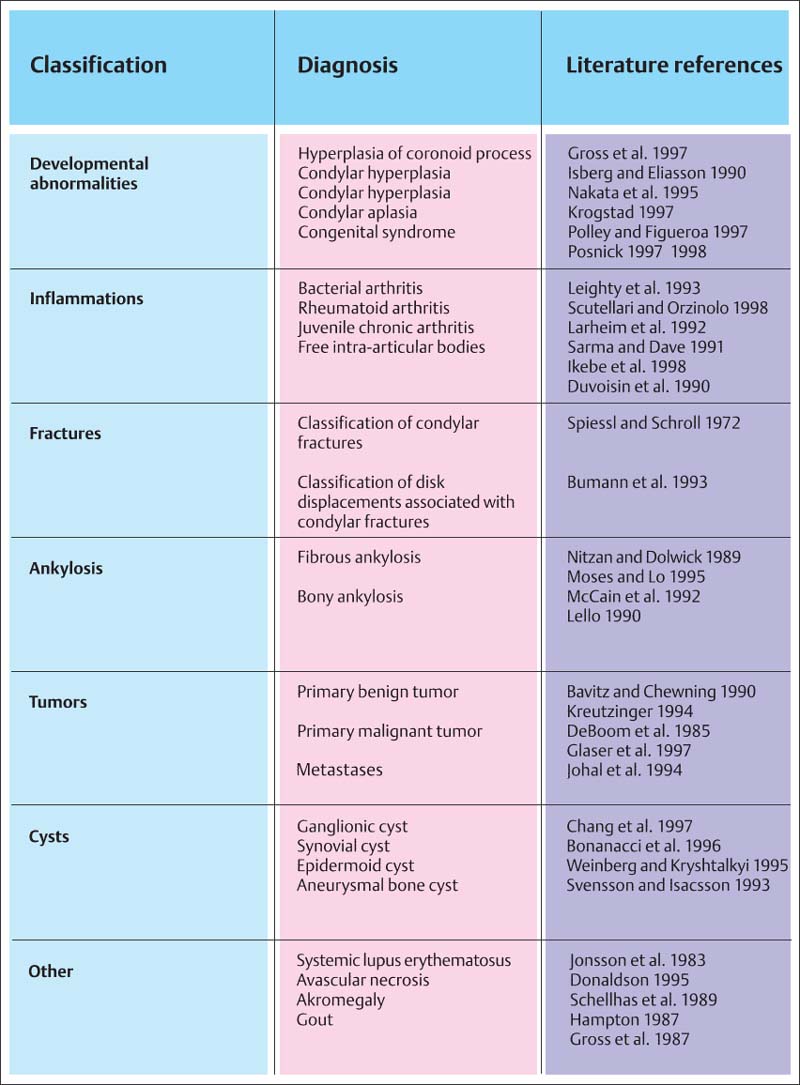 762 Primary diseases of the temporomandibular joint

Classification of the most important primary diseases of the temporomandibular joint with literature references for additional reading.

Over the past several decades a large number of classifications for functional, or so-called secondary joint diseases, have been proposed. A classification is not only the foundation for a “common language,” it is also necessary to identify and define other conditions that are primarily nondental. In this respect, the inclusion of functional temporomandibular joint diseases in a medically oriented classification of headaches, cranial neuralgias, and facial pain like that of the International Headache Society (Okeson 1998) makes sense. The classification adopted by the American Academy of Orofacial Pain (McNeill 1993) is therefore recommended as the basis for international communication.

As was made clear in the chapter on manual functional analysis, these academic guidelines must be made more specific for the sake of making a differential diagnosis that is relevant to practice and treatment. With reference to the previous chapter and to facilitate the general understanding, a classification of affected structural components is presented in Figure 763. Only the loading vector is relevant to the treatment. 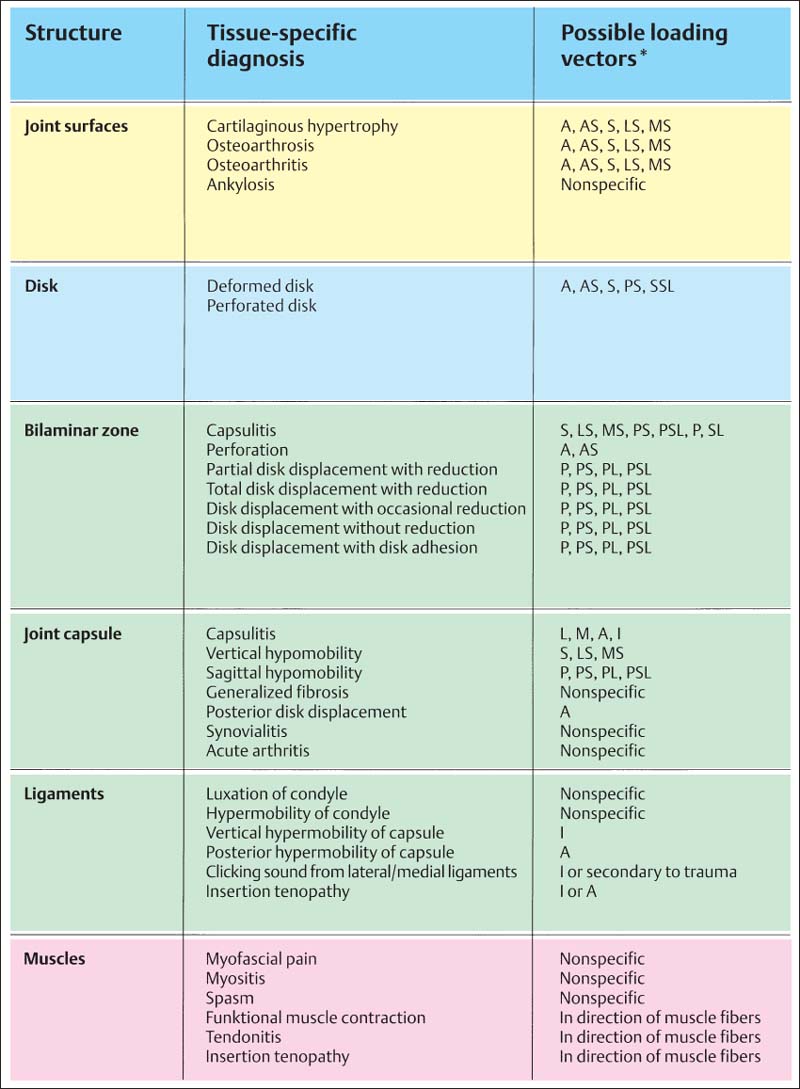 763 Classification of secondary diseases of the temporomandibular joint

This classification corresponds to the information in the chapter “Anatomy” and the groups are separated by individual anatomical structures according to the steps in the clinical examination procedure. For everyday clinical communication the individual tissue-specific diagnoses are especially important. In the right-hand column are listed the theoretically possible loading vectors for each condition. The direction of a particular loading vector can be determined for each patient through systematic use of the manual functional analysis examination technique. For certain diagnoses, however, only a nonspecific loading vector can be deduced. In such cases only a general symptomatic treatment is possible at that particular time. After the nonspecific pain symptoms have been relieved, it is usually possible to arrive at a more specific differentiation with the help of manual examination methods.

Hyperplasia, Hypoplasia, and Aplasia of the Condylar Process

A unilateral hyperplasia, hypoplasia, or aplasia may cause facial asymmetry that is recognizable clinically (Westesson et al. 1994). It is often difficult to distinguish clinically which side is “normal” and which is either “too long” or “too short.”

• Hyperplasia can be traced back to a primary increased reactivity of the condylar cartilage, or to a secondary adaptation to skeletal or occlusal conditions (Gola et al. 1996). The former cause can be reliably demonstrated during the active stage with a scintograph (Gray et al. 1994). A 10% enrichment of nucleotides in side-by-side comparisons is considered clinically significant (Pogrel 1985). A benign tumor may be concealed behind an active hyperplasia (Papavasiliou et al. 1983, de Bont et al. 1985).

Female patient with hyperplasia on left side

A comparison of the sides in a panoramic radiograph reveals abnormal formation of the left condyle. The relation of the distances between the condyle (1), the coronoid notch (2), and gonion (3) lead one to suspect a hyperplasia of the left condylar process. There are no striking findings in the occlusion beyond some tipping and rotation of teeth.

Clinically a lateral open bite has developed with intrusion of the tongue between the occlusal surfaces. The lines representing the relation of the distances between the condyle (1), the coronoid notch (2), and gonion (3) indicate a shift in favor of the ascending ramus. The lower left first molar has been extracted because of a painful pulpitis.

Even though a good occlusion had been established in the meantime, growth in the ascending ramus has progressed further. This was accompanied by a recurrence of the lateral open bite. A scintigraph showed a slightly greater accumulation of nucleotides on the left side. Because benign tumors in the condylar region can present a similar picture, the possible differential diagnoses must be discussed thoroughly with the patient. Collection M. Roloff

Hyperplasia of the Coronoid Process

As with the condyle, the coronoid process can be enlarged through autonomous growth or a secondary adaptive process (Giacomuzzi 1986, Totsuka and Fukuda 1991, Kerscher et al. 1993). Patients with congenital restriction of jaw opening and those with limited opening because of disk displacement without repositioning have longer coronoid processes than subjects in a healthy control group (Isberg and Eliasson 1990). With extensive hyperplasia, the process can strike against the inside of the zygomatic arch as the jaw is opened, thereby causing limited mouth opening. Occasionally the lateral movements are also restricted (Gross et al. 1997). Lengthening of the coronoid process can be identified with relative ease in a panoramic radiograph (Hicks and Iverson 1993, Hönig et al. 1993, 1994).

The treatment of choice is surgical removal (Constantinidis et al. 1997, Chen et al. 1998. Manganaro 1998). A CT scan with three-dimensional reconstruction is indicated for precision planning of the operation (Totsuka et al. 1990). MRI, on the other hand, is necessary only if there are postoperative complications (Pregarz et al. 1998).

A 35-year-old male with hyperplasia of the right coronoid process and normal appearance on the left. Clinically there Is a restricted mouth opening (RMO) of 25 mm. The cause for the RMO cannot be automatically deduced from the finding of an enlarged coronoid process. A causal relationship can be established only when the RMO is accompanied by a bony end-feel upon passive jaw opening (see also pp. 66f).

Left: Representation of the right coronoid process viewed from above, showing its mushroom-shaped enlargement. Clinically both the mouth opening and right lateral jaw movements are restricted. In this case the enlargement was caused by an osteochondroma. Clinically detected limitations of movement always depend upon the extent of the hyperplasia.

Right: Image of the unaffected left coronoid process in the cranial view.

A hyperplasia or aplasia of the ascending ramus of the mandible is frequently associated with hemifacial microsomia (Lauritzen et al. 1985), Goldenhar syndrome (Heffez and Doku 1984, Hoch and Hochban 1998), or Treacher Collins1 syndrome (Posnick 1997). In addition to bony changes there are often marked abnormalities in the sizes of the surrounding muscles. The volume of the affected lateral pterygoid muscle may be only 20-35% that of the normal side (Kahl-Nieke and Fischbach 1998). With hemifacial microsomia all permanent first molars and all deciduous molars are significantly smaller than the teeth of normal individuals (Seow et al. 1998). Early functional orthodontic treatment of microfacial microsomia can have a positive effect on the development of the masticatory system as either a presurgical step or as the sole conservative treatment (Kahl-Nieke and Fischbach 1998).

Panoramic radiograph of a 12-year-old girl. In this hereditary disease there is incomplete breakdown of dermatane sulfate and therefore its concentration in the tissues is increased (Sheridan et al. 1994, Nelson 1997. Byers et al. 1998). The disease manifests itself in the craniofacial region as cyst-like changes in the jaw bones, multiple unerupted teeth, delayed tooth eruption, and, due to its effect on the fibrocartilagenous joint surfaces, shortening of the ascending ramus.

771 Hemifacial hypoplasia of the right ascending ramus of the mandible

Panoramic radiograph of a 20-year-old female patient. There is nothing remarkable about the bone structure on the left side. At this age the treatment of choice is lengthening of the ascending ramus by means of an intraoral distraction osteogenesis LeFort-I-Osteotomy is indicated. Notwithstanding the/>