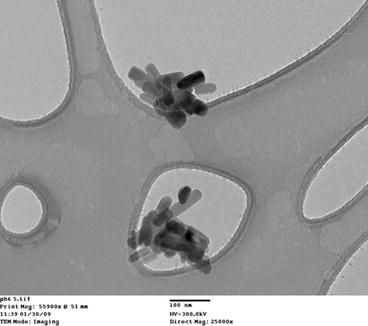 Fig. 12.2
FHA crystals synthesized under ambient conditions
The crystals have been incorporated into several different vehicles including resins, a laboratory-synthesized substance that resembles the “glue” that allows mollusks to adhere to rocks in the ocean and water. Variations of these mixtures could be used in the treatment and prevention of caries, tooth sensitivity, and erosion or to “whiten” discolored teeth. An ideal vehicle for the FHA crystals might be any of the self-etch adhesives which are now used routinely in dentistry. The concept is that this combination can be used as a “paint on” enamel. Because of the acid nature of the adhesive, it will bond to enamel and dentin allowing it to cover those surfaces with a layer of enamel crystals. It can be tinted to match the color of the tooth or to whiten a discolored tooth (Fig. 12.3). It could also be used to repair carious and erosive lesions (Fig. 12.4), as an occlusal sealant (Fig. 12.5) or as desensitizing agent (Fig. 12.6) – a five-in-one product. One further advantage of this technology is that it will release fluoride over time even if incorporated into a resin (Fig. 12.7). This will allow not only the treatment options described above but may also have a caries-preventive effect by promoting remineralization or possibly continuing mineralization in teeth which are hypomineralized at eruption such as those with hypomineralized AI or MIH a though this has yet to be established. Large structural defects could be restored with a composite material that is partially filled with the FHA crystals (Fig. 12.8). As can be seen in Fig. 12.8, the mechanical properties of the composite material are not diminished if FHA crystals are substituted for 20 % of the silanated silica. This “paint on” enamel technology again promotes the concept of noninvasive dentistry where it can be applied over early demineralized lesions on smooth or occlusal surfaces. Further research is now required to evaluate this technology in in vivo settings and clinical trials. 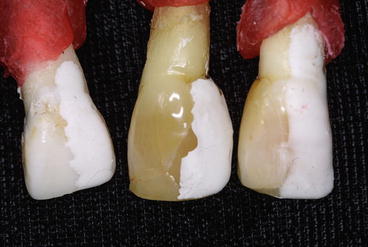 Fig. 12.3
“Paint on enamel” for the treatment of enamel defects including early carious lesions. It can also be tinted to match the tooth color or in this case to whiten discolored teeth. Right half of the tooth was painted with self-etch adhesive plus FHA crystals and titanium dioxide 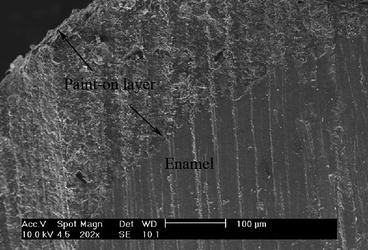 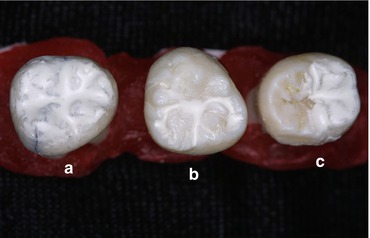 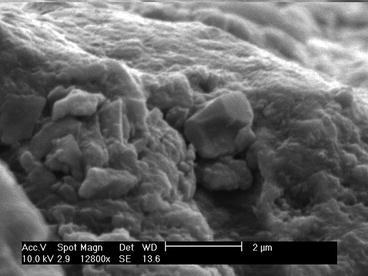 Fig. 12.7
Fluoride release from a bis-GMA/TEGDMA composite of different filler % vol. of unsilanated and silanated FHA crystals for 1 day, 1 week, and 1 month

Fig. 12.8
Flexural strength and elastic modulus (%) of a bis-GMA/TEGDMA composite filled with silanated silica (Ssilica) particles and nonsilanated FA (NSFHA) crystals
It has also been shown that the FHA crystals can be produced as a film (Fig. 12.9), but these tend to be brittle and unsuitable for use as laminates. It is thought that laminates could have a temporary role in protecting lesions, including hypomineralized lesions, while they are mineralizing. In order to obtain a flexible laminate which would conform to the curved surface of a tooth, the crystals have been mixed with a polymer with the trade name of Eudragit. This is used as an enteric coating for tablets (e.g., aspirin) and it dissolves at various pHs. It has the advantage of being approved by the Federal Drug Administration in the USA for use in humans. This laminate is white in appearance and is flexible (Fig. 12.10a). It can be cut to any size and is easily adapted to the curved surface of a tooth. It can be bonded to the tooth surface, or, if allowed to dry on the tooth, it will adhere to that surface. It could be used like a “Band-Aid” to cover discolored, defective enamel and early carious lesions without removing any tooth tissue. The laminate is esthetic and will cover large areas of tooth surface (Fig. 12.10b). It is hoped that as the Eudragit dissolves over time, the FHA crystals will become incorporated into the enamel surface producing a surface with high-fluoride content. This laminate will achieve an esthetic repair along with caries-preventive activity – a noninvasive approach. 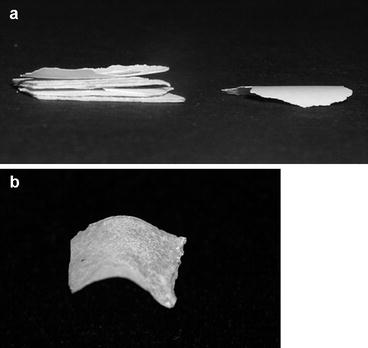 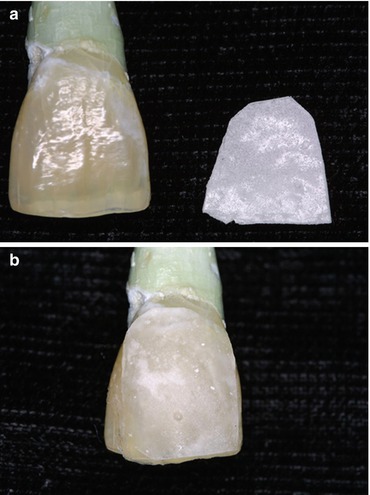 Fig. 12.10
(a) Human incisor tooth and FHA/Euradgit laminate and (b) FHA/Euradgit laminate applied to the buccal surface of human incisor tooth
The latter part of this chapter has described two potential products for the repair and prevention of enamel defects. Prototypes of these modalities have already been tested in vitro and are good examples of potential noninvasive type of products. There is now the need for them to undergo clinical testing to establish their usefulness in clinical practice.