This chapter focuses on different aspects, benefits, and various body mechanisms related to exercises. Because physical exercise causes changes in the usage and demand for nutrients, and also produces a greater quantity of metabolites, it has effects on the cardiovascular system, the respiratory system, the organs storing energy substrates, and the tissues actually involved in the exercise. Before any actual muscle effort begins, there is an increase in heart rate and in rate of ventilation. In the early phase of exercise, the psychic stimulus is amplified by the information reaching the brain from the muscle and joint receptors that help to generate an immediate rapid increase in both cardiac output and ventilation. As exercise ceases, there is an immediate drop in cardiac output and ventilation to about midway between the exercising and the previous resting levels. Blood pressure may drop abruptly because although cardiac output is less, the peripheral resistance remains low as a result of the continuing vasodilatation in muscle and skin. This effect is fairly rapidly remedied. Although regular exercise may help to maintain weight at a reasonable level, diet is equally important.

Since physical exercise causes changes in the usage and demand for nutrients, and also produces a greater quantity of metabolites, it has effects on the cardiovascular system, the respiratory system and the organs storing energy substrates, as well as the tissues actually involved in the exercise.

The resting subject has already been characterised in various ways. A typical male subject resting in a post-absorptive state has a metabolic rate of around 4kJ/min, or an equivalent oxygen consumption of about 10mmol/min. Leisurely walking raises these values to about 5.8 kJ/min and 14 mmol/min. At rest the heart rate is about 72 beats/min, the stroke volume about 70mis, and the cardiac output about 5 litres/min. The breathing rate is around 12/min and the tidal volume about 450 ml–a total ventilation of about 5.5 litres/min. The ratio of carbon dioxide output to oxygen usage, the respiratory quotient, is probably a little under 1.0. Deep body temperature is around 37°C and skin temperature about 30°C.

Before any actual muscle effort begins, there is an increase in heart rate and in rate of ventilation (Fig. 26.1). These are not related to the concentrations of oxygen or carbon dioxide in the blood, which at this point would be unchanged–although they will now change as a result of the increased ventilation. This phase is therefore considered to be a phase of psychic stimulation. The cardiac effects are mediated first through a decrease in parasympathetic (vagal) activity and then through an increase in sympathetic activity. Cardiac output is increased mainly by an increase in heart rate whilst stroke volume changes relatively little. Blood pressure rises, diastolic to a lesser extent than systolic. Ventilation increases, mainly by an increase in tidal volume rather than rate of breathing. This results in a greater blowing-off of carbon dioxide from the lungs and the alveolar carbon dioxide concentration falls. The blood flow to the muscles increases, possibly because of sympathetic vasodilatation mediated by cholinergic or (3 adrenergic receptors. General sympathetic vasocontrol is unaffected. 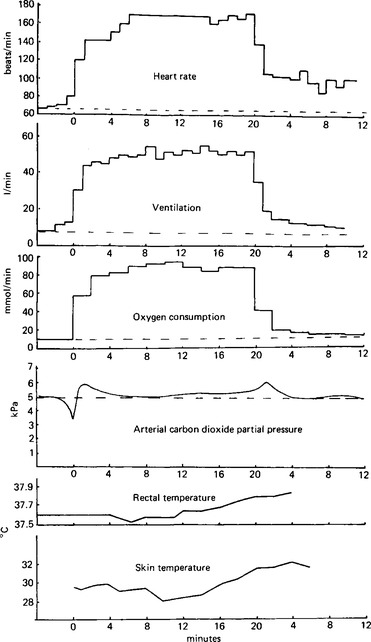 Figure 26.1 Data from an experiment on exercise. Changes in heart rate, ventilation, oxygen usage, carbon dioxide elimination, rectal and skin temperatures before, during, and after a 20 min spell of exercise on a bicycle ergometer at a load of 150 watts (joules/s). The time calibrations are given as 0 for the start of the exercise, 20 for the end of the exercise period and the beginning of recovery, and then up to 12 min for the recovery. The dotted line across each trace represents the mean resting level.

The changes occurring immediately before exercise may be due in part to impulses from joint receptors and other proprioceptors but their role is probably more significant as exercise actually begins.

In the early phase of exercise the psychic stimulus is amplified by the information reaching the brain from the muscle and joint receptors, which help to generate an immediate rapid increase in both cardiac output and ventilation. The increase in the first few seconds can be as much as half of the total increase seen during exercise. Although the changes are much greater than the anticipatory changes, the mechanisms are the same. Alveolar carbon dioxide concentrations fall to a minimum level.

Over the next 1–2 min a slower adjustment occurs as the muscular activity lowers the partial pressure of oxygen in the blood, raises that of carbon dioxide, and increases the tissue fluid concentrations of lactate, potassium ions, adenosine and adenosine monophosphate. The muscle produces heat, causing the local temperature to rise. The blood returning to the lungs contains more carbon dioxide and less oxygen: the carbon dioxide acts on the medullary, and, to a lesser extent, the peripheral, chemoreceptors to stimulate both ventilation and cardiac output. The local stimuli within the muscle cause dilatation of the arterioles, metarterioles, and precapillary sphincters, increasing the number of open capillaries some 10–100 times. This incidentally decreases the diffusion distance for the oxygen from the blood to the muscle cells. In some muscles there is a capillary for every muscle fibre. The velocity of flow decreases because of the increased cross-sectional area of the total vascular bed and this, together with the increased amount of 2, 3-diphosphoglycerate in the red blood cells, and the effect of the lower pH and higher temperature on the haemoglobin-oxygen dissociation curve, results in a much greater removal of oxygen from the blood. The gradient favouring oxygen diffusion into the muscle cells is increased because of the their greater oxygen usage. The venous blood from the muscles during exercise will have lost nearly three times as much oxygen as the venous blood in resting conditions (Table 26.1). Since blood flow increases over 30 times, the oxygen usage by the muscle can increase over 100-fold. However, in the early stages the oxygen supply cannot keep pace with the increased metabolic load and the muscle switches to a mixture of anaerobic and aerobic metabolism until the circulatory and respiratory adjustments are complete. In these situations, with moderate to severe workloads, the white ‘fast’ skeletal muscle fibres, with their greater potential for anaerobic work, are mobilised. Adrenaline stimulates glycogenosis in these muscle cells. In anaerobic contraction ATP is regenerated from ADP by using energy from creatine phosphate or from the breakdown of glycogen to pyruvic and lactic acids. Oxygen is needed to oxidise pyruvic acid through the Kreb’s cycle. In the red muscle fibres, which are used for continuing activity, or for exercise of low to moderate intensity, myoglobin functions as an intermediary oxygen store to maintain oxidative metabolism. During such exercise the main energy source is fat. The metabolic changes in the muscle cells are described on pp. 297–300.

Changes in oxygen carriage during exercise

Circulating carbon dioxide stimulates respiration, increasing the ventilation up to six or seven times by increasing both the rate and the depth. Oxygen usage may increase from around 10mmol/min up to 80 or 90mmol/min. As the tissue respiration is partially anaerobic an ‘oxygen debt’ is accumulated—further oxidation of the metabolic products will be needed later. The concentration of circulating lactic acid rises from 1 mmol/1 to 10–15 mmol/1. This acid must be buffered: so carbon dioxide is lost via the lungs, and the respiratory quotient rises to 1.5 or even 2.0. The normal expiration of around 9mmol/ min of carbon dioxide rises towards 200mmol/min. Despite this blood pH falls to around 7.3. The alveolar carbon dioxide concentration rises rapidly from the low level reached just before exercise to a new steady level higher than usual, as production of carbon dioxide first exceeds, and then is matched by, the capacity for excretion by ventilation. If exercise continues the partial pressure of carbon dioxide falls again as hydrogen ion accumulates in the blood.