Xerostomia is a permanent and devastating sequela of head and neck radiation that affects ~40,000 patients annually in the United States.1 This figure is expected to grow as concomitant chemoradiation therapy and hyper-fractionated radiation schemes become the standard of care for most advanced oropharyngeal and laryngeal malignancies due to superior 5-year disease-free survival rates and advantages of organ preservation.2,3 The resulting salivary hypofunction after radiation and chemoradiation therapy leads to impaired mastication and loss of oral lubrication. This hinders bolus formation and causes dysphagia that limits food choices and leads to nutritional deficiencies. Speech is altered due to the dry, sticky oral mucosal environment that hinders tongue movement and leads to oral motor fatigue. The oral mucosa becomes dry, fissured, and painful. Rampant dental caries and recurrent fungal infections result from alteration of the microfloral environment of the oral cavity and oropharynx. Sleep dysfunction occurs due to the need for patients to moisten their mouths at night by drinking water; this leads to a cycle of polydipsia and polyuria, resulting in frequent arousals and fatigue. Xerostomia associated with head and neck radiation therapy severely degrades the general quality of life and can contribute to depression that is commonly seen in head and neck cancer patients.4,5

The early effects of radiation on salivary glands were first characterized by Jean Bergonie in 1911.6 The existing experimental data on salivary gland radiosensitivity and the theoretical mechanism by which salivary tissue damage occurs during head and neck radiation are well described in animal and primate models. It is generally agreed that radiation causes lipid peroxidation that is catalyzed by heavy metal ions present in the granules of serous cells. This process leads to membrane disruption and release of cellular enzymes, which then cause autolysis and cell death. It is hypothesized that this damage may also include reproductive death of acinar progenitor cells.1,7,8 The chief histopathologic feature of radiation-induced salivary damage that leads to hypofunction in humans is serous acinar cell loss with relative preservation of ductal structures (Fig. 14–1A, B).9 Recent histopathologic and immunohistochemical studies of chemoradiated salivary glands in humans have shown profound acinar cell loss and ductal progenitor cell preservation, suggesting a higher resistance of these cells to the lethal deoxyribonucleic acid (DNA) damage that is the fate of acinar cells during radiation therapy.10 Additional theoretical considerations that affect salivary flow after high-dose radiation include destruction of the surrounding capillary vascular structure and fibrosis.11

The major salivary glands typically lie within the head and neck radiation fields for most upper aerodigestive tumors, and the amount of glandular damage is felt to be dependent upon radiation dose, fractionation, latency of treatment, the premorbid functional state of the glands, and the ratio of serous to mucinous cells within an individual gland.1 Irreversible radiation damage begins at 27 Gy.12 A 50% decrease in salivary flow occurs by 1 week of fractionated therapy, with a transient rise in serum amylase as acinar cell damage occurs. Flow continues to decline throughout the treatment period of 6 to 8 weeks with little or no flow by the end of radiation.13 Decreased flow is accompanied by increased salivary viscosity, decreased pH, increased concentration of electrolytes, and decreased immunoglobulin A (IgA).13,14 Radiation for most aerodigestive and salivary malignancies will result in doses between 50 and 72 Gy to the salivary glands, which is well above the 27 Gy threshold and explains the slow recovery over months to years and the permanent salivary morbidity that is experienced by most head and neck cancer patients after radiation therapy.

There is no preventive or curative therapy for xerostomia at this time. Palliative therapies include frequent water drinking, over-the-counter oral sialagogues (sugarless citrus candy, chewing gum), and oral wash preparations such as Biotène and Oral Balance (both Laclede Inc., Rancho Dominguez, CA) and Zendium, which contain glucose oxidase, lactoperoxidase, and lysozyme that help to maintain the microfloral environment and prevent fungal overgrowth. Different types of saliva substitutes are now commercially available, containing different polymers as thickening agents, for example, carboxymethylcellulose (Oralube and Glandosane), polyacrylic acid, and xanthan gum (Xialine).15 These therapies are generally effective in mild cases of xerostomia but do not work as well in severely afflicted patients because their effects are transient and they require frequent application. The gold standard of pharmacologic therapy for the treatment of xerostomia is pilocarpine hydrochloride. This agent is an orally ingested cholinergic parasympathomimetic with muscarinic action that stimulates salivary cell secretion. It is not known whether this medication adequately replaces salivary amylase, the key oral digestive enzyme present in normal saliva. Due to underlying dysphagia and aspiration, some head and neck cancer patients are unable to swallow this orally based preparation.

In a 12-week randomized, double-blind, placebo-controlled multi-institutional trial, 207 patients who had received more than 40 Gy were treated with 5 or 10 mg pilocarpine hydrochloride three times a day (tid) and showed a statistically significant improvement in mouth dryness and salivary flow over placebo-treated patients. There was no statistical difference in control of symptoms between the 5 and 10 mg treated patients, but sweating and other cholinergic side effects were more common in the 10 mg treated group.16 In another 12-week, double-blind, randomized, placebo-controlled study, 162 patients were randomized to placebo or pilocarpine. Patients were allowed to control their dosing based on their symptoms; greatest improvements in salivary flow rates and symptoms were achieved with continuous administration of greater than 2.5 mg tid and in patients with no measurable salivary flow at baseline.17 In both of these placebo-controlled studies, some patients noted improvement in the global assessment of their dry mouth, speaking without liquids, and a reduced need for supplemental oral comfort agents. The most common adverse events related to drug therapy were sweating, nausea, rhinitis, diarrhea, chills, flushing, urinary frequency, dizziness, and asthenia. The most common adverse experience causing withdrawal from treatment was sweating (5 mg tid = 1%; 10 mg tid =12%). The risk—benefit ratio of pilocarpine has never been established; therefore, despite its existence for more than 30 years, many patients abandon the therapy as a result of its side effects.18

The lack of well-tolerated pharmacologic therapies has led to clinical strategies that attempt to prevent radiation damage to salivary gland cells by using various cytoprotectant substances such as amifostine19 and modifying the location of the radiation beam to limit salivary gland exposure using a technique called intensity modulated radiation therapy (IMRT).20

A surgical method (Fig. 14–2) that moves one submandibular gland out of the radiation field into the submental space prior to radiation therapy is a promising new technique that is undergoing phase II trials.21 The key to this technique is ensuring retrograde blood flow to the transferred gland through the facial vessels. Retrograde flow in the facial artery is assessed by ligating the proximal end just medial to the posterior belly of the digastric muscle and partially cutting the artery distal to the ligature. If there is no flow, the procedure is abandoned. If flow is observed, the facial artery and vein are ligated and cut just proximal to their branches supplying and draining the gland. This leaves the gland pedicled to the distal facial vessels via retrograde flow. The gland is then released from surrounding structures and repositioned in the submental space medial to the anterior belly of the digastric muscle after bisecting the mylohyoid muscle. The gland is anchored to the digastric muscle and periosteum of the mandible with absorbable sutures. The anterior, posterior, and inferior borders of the gland are marked with a 25-gauge wire for future radiation planning. The repositioned submandibular gland and nearby sublingual gland are shielded during radiation therapy. Use of this technique prevented xerostomia in 83% of 38 patients using objective and subjective measures of salivary flow in a long-term follow-up study.22 This innovative approach, unfortunately, is limited to oropharyngeal tumors and cannot be used safely for oral cancers; recent long-term data on this procedure, though small in numbers, show promise for providing clinical relief in patients with oropharyngeal cancer without increased risk of regional tumor recurrence.22 Due to the variability of primary tumor site, extension, and lymphatic drainage, no single preventive strategy is universally applicable to head and neck cancer patients; also, the procedure is best performed in large cancer centers where study of large cohorts can be applied. None of the methods described to prevent salivary gland damage, including amifostine, IMRT, and submandibular gland transfer, have shown long-term clinical efficacy in large studies, and their potential role in tumor recurrence remains unquantified at this time.

Acinar cell loss remains the underlying histopathologic correlate to the salivary hypofunction that is seen in radiation-induced xerostomia. Pharmacologic strategies have fallen short of providing the “magic bullet” for this condition, but they remain the mainstay of treatment. Strategies that will be successful in treating this devastating condition in the future will recognize the critical need to perfect methods for preserving acinar cells and to develop methods for regeneration or replacement of cell loss. 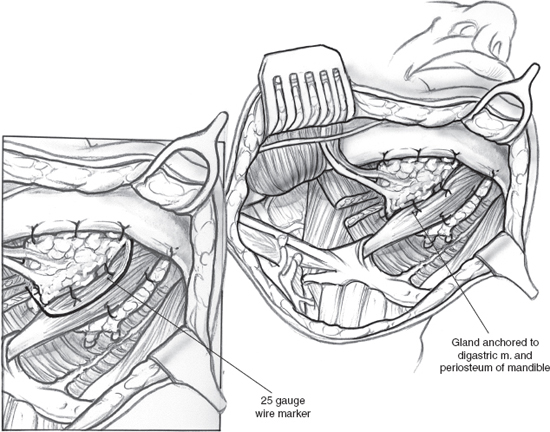 Currently, no regenerative strategy has emerged in humans. It has been shown that the regenerative capacity of salivary tissue resides in the ductal epithelium10,23 and that damaged acinar cells can be replenished by stem cells in the distal segments of the ductal segments that terminate at the acini.24 Tissue reengineering strategies in the rat have employed adenoviral-mediated gene transfer of a water channel protein to these ductal cells and demonstrated the transformation of ductal epithelium into acinar cells with a measurable increase in saliva production by the transfected tissue. It is unknown whether irradiated target epithelium would transform into acinar cells in a human model.25

De novo tissue engineering of functional salivary gland tissue has recently been described as a potential physiologic solution to the problem of xerostomia.26 The investigators in this study hypothesized that autologous human engineered salivary cells seeded on polymers could form functional tissues when implanted in vivo. Salivary epithelial cells were isolated from human salivary tissue, expanded in vitro, seeded on biodegradable polyglycolic acid polymer scaffolds, and implanted in athymic mice. These cultured epithelial cells retained their phenotypic and functional characteristics through all stages of subculture (>7). Scaffolds were retrieved 2, 4, and 8 weeks after implantation, and all tissue constructs had formed a vascular supply and histologically recognizable acinar structures. Functional analysis using immunohistochemistry, Western blot, and reverse transcriptase polymerase chain reaction demonstrated amylase production by the engineered tissue as well as the presence of cytokeratin and aquaporin-5, a critical secretory water channel protein (Fig. 14–3A–E). Theoretically, patients undergoing radiation therapy for head and neck cancer could undergo autologous salivary gland tissue collection prior to radiation. Salivary epithelial cells could be isolated from this tissue, expanded in culture, seeded on biodegradable scaffolds, and transplanted back into the patient to serve as a continuous source of saliva.

In summary, radiation-induced xerostomia is a devastating complication of radiation and chemoradiation therapy for head and neck cancer. Current treatment methods are palliative in most cases, and preventive strategies are the best clinical approach at this time because these techniques limit acinar cell loss. Improved understanding of the regenerative capacity of salivary tissue as well as the pathophysiology of radiation damage has led to innovative new research that may in turn lead to the development of new clinical solutions to this problem. 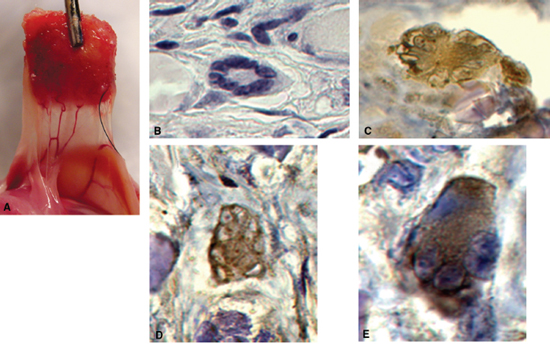