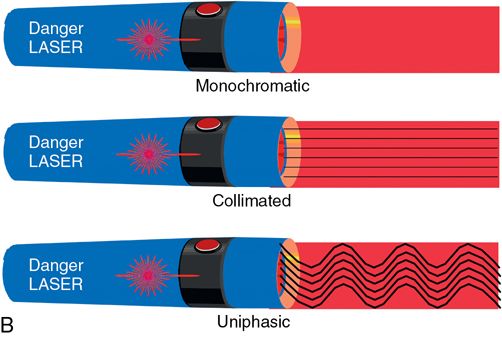 Because lasers are monochromatic, each has a single frequency and wavelength and therefore a single “color.” Thus, lasers often are defined by their visible color (e.g., red light or green light lasers), their position in the electromagnetic spectrum (e.g., infrared, ultraviolet or radiograph lasers), or the chemicals that create the light (e.g., CO2, argon, or Nd: YAG lasers).

All laser beams are parallel, or collimated, unlike regular light. Because the laser beam does not diverge significantly over distance, the source can be positioned at great length from the target tissue or can be very efficiently focused down to a small spot with a convex focusing lens.

Collimation, monochromaticity, and uniphasicity together produce a very intense and powerful flash or beam of light. The ability to efficiently focus the beam down to a small spot size (an effect of the collimation on a convex lens) produces an extremely powerful, condensed energy source.

Laser beams may reflect off, transmit through, scatter (break up) within, or be absorbed by organic target tissue. The first three conditions elicit no effect within the tissue, but when absorbed, a laser beam may produce several different results. The most important is the photothermal effect, or tremendous heat generation that occurs almost instantaneously within the tissue. In soft tissue, this causes the intracellular water to boil or vaporize and literally explodes and disintegrates the cell. In hard tissues, similar effects may be seen in hydroxyapatite. Unlike other heat sources, however, the laser can be applied with incredible precision and with such speed that only microns of tissue can be removed at a time with very controlled and minimal damage to adjacent tissues and structures. Conversely it sometimes is advantageous to have a lateral heat effect in tissue that results in thermal coagulation of adjacent blood vessels and a bloodless field. Lasers can be controlled to provide this as well.

The many lasers now available for medical and dental use differ in several aspects. The primary difference is the active medium (i.e., the material that undergoes stimulated emission). The specific material used determines the wavelength of energy produced and therefore the clinical indications. Few materials in nature can undergo this process because the material must be capable of sustaining population inversion, an unnatural condition in which most atoms are in a highly excited state.

The ideal system uses fiberoptic delivery of the laser beam to the target tissue. These systems are flexible and precise, they allow for both contact and noncontact surgery, and they are capable of endoscopic delivery. Unfortunately, not all wavelengths (e.g., CO2) can be transmitted through the currently used quartz fiberoptic fibers. These other types of lasers use articulated arm delivery in which a series of hollow metal tubes connected by mirrored flexible joints or “knuckles” allow the beam to be passed from the laser to the tissues. Although this is functional for superficial tissues, it is less than ideal for deeper tissues or areas of difficult access, such as the oral cavity. Some newer lasers use a hollow wave guide, a variation of the articulated arm. The hollow wave guide is a flexible metal tube internally lined with a mirrored surface or foil, which allows the beam to reflect down the guide to the tissues. Although not as flexible as a fiberoptic fiber and incapable of endoscopic delivery, this system has dramatically improved the dentist’s ability to provide convenient, precise delivery within the oral cavity.

Some lasers produce a continuous beam of laser light as long as the machine is energized, whereas others can be pulsed. These very high power, short duration pulses of laser light minimize the time available for lateral tissue heating and damage.12 Other lasers can be electronically enhanced to produce extremely fast, high-powered laser bursts (“superpulsed” or “ultrapulsed”) for situations such as dermatologic skin surgery in which lateral thermal damage produces scarring.

Selecting the appropriate laser for a given procedure usually is a simple matter of determining which laser wavelength is best absorbed by the target tissue while producing the least reflection, scatter, and transmission. Laser wavelengths that are absorbed by water (e.g., CO2, erbium) are appropriate for soft tissue surgery. Those well absorbed by hemoglobin are better suited for vascular tissues or lesions (e.g., argon, KTP: YAG, tunable dye, copper vapor lasers). Argon laser wavelengths are well absorbed by composite resin, and the erbium laser wavelength, which is absorbed by both hydroxyapatite and water, allows for hard tissue use. Some lasers with wavelengths that are absorbed by a number of different tissues (i.e., chromophores) may be useful for a variety of tissue effects. In addition, some transmission may actually be desirable in certain situations to allow deeper penetration of tissues (e.g., when deep hemostasis is desired in vascular lesions). To allow for precise tissue effects and clinical uses, some devices can produce more than one wavelength (i.e., CO2 and Er: YAG, KTP: YAG and Nd: YAG, and tunable dye), which allows the operator to select the desired tissue effect by varying the wavelength used. The choice of an appropriate wavelength involves a combination of known tissue effect and the operator’s clinical experience.13

Currently the most commonly used laser in general dentistry is the diode laser. Used primarily for soft tissue incisional procedures, it has the advantage of being small, relatively inexpensive, and comparatively easy to use. However, its mechanism of action is widely misunderstood. Some lasers function by the direct effect of laser energy on soft tissue, whereas diode lasers used in dentistry do not have sufficient power to cut tissue.13 Therefore the laser tip needs to be activated (initiated) by touching the tip to a light absorbing material such as articulating paper, cork, or other dark substance, which produces a “charring” of the tip. The tip is now capable of absorbing laser light and when activated by the laser will heat up and vaporize the underlying tissue (Fig. 21-2).

Laser tip activation deposits carbon on the tip of the laser fiber, which becomes the target of the diode laser energy.

Initiate the tip and a portion of the side of the laser fiber with light absorbing material.

The light-absorbing material used for initiating the laser fiber is not consumed by the laser energy. However, with some lasers it may be wiped or broken off during use. In that situation it must be reinitiated.

It is also the cause of more extensive collateral thermal damage as the power of the unconverted laser energy penetrates deeper into the tissues (Fig. 21-3).5

Because the diode laser functions by cutting with a hot tip, the specific wavelength of the diode laser is of less significance than in other lasers. The remaining parameters of power, time, and spot size are, however, still critical. Sufficient power is necessary to maintain the hot tip once it is in contact with the cooler tissue. If the tip cools beyond the temperature required to efficiently incise the tissue the resulting increase in contact time will increase the collateral thermal damage as in other lasers. Spot size (or in the situation of diode laser, fiber size) is significant because the heat of the laser tip is concentrated in a smaller area that increases the heat energy per unit area.

Many laser wavelengths either are absorbed by hemoglobin or constrict vascular wall collagen, allowing for bloodless surgery.14 This allows the dentist to work in a clean, dry environment unobstructed by bleeding. When used correctly, lasers also can remove precise and minimal amounts of tissue with minimal effect on adjacent tissues. They are ideal for detailed, exact tissue manipulation.15 Lasers have an effect on neural tissue that generally results in less pain after surgery compared with other types of treatment.16 In fact, because of their great speed, some pulsed lasers may even be used for soft or hard tissue surgery without the need for anesthesia.17 Minimal postoperative pain and absence of bleeding usually precludes the need for suturing, tissue closure, or coverage with splints or dressings except when cosmetic requirements dictate otherwise.

The elimination of lateral tissue damage is especially important in dentistry because of the proximity of such chemically diverse yet clinically vital structures as dental pulp, bone, tooth structure, and oral soft tissue. Lasers also make possible procedures such as perioral cosmetic skin resurfacing, in which even minimal adjacent dermal tissue damage would translate into inevitable and devastating scarring. Sealing of the lymphatic system during laser surgery and the minimal tissue trauma result in little or no postoperative edema in most patients.18 Finally because of the minimal tissue damage and the decrease in the number of myofibroblasts in laser-treated wounds compared with wounds made by scalpel or electrosurgical instruments, postoperative scarring and contracture are minimized, allowing dramatic surgery without the fear of significant postoperative cosmetic deformity or functional deficits.19

Disadvantages are few but important. The preeminent concern with lasers in dentistry is safety. Lasers require tremendous diligence to maintain a safe operative environment for both the patient and the dental team (see the section on Laser Safety later in this chapter). Other disadvantages include the generally high cost of purchasing and maintaining the laser, the loss of tactile sensation with noncontact lasers, the learning curve necessary to obtain uniform results, and the specificity of some laser wavelengths, necessitating the occasional need for more than one laser for a particular procedure. Finally although healing after laser surgery generally is excellent, usually much better than with other instruments such as a scalpel or electrosurgical instrument, it also generally is slower because of the vascular sealing.20

Restorative and intraoral esthetic modification can be divided into soft tissue or combined soft and hard tissue.

Tags: Esthetic Dentistry – A Clinical Approach to Techniques and Materials_nodrm
May 29, 2015 | Posted by mrzezo in Esthetic Dentristry | Comments Off on Esthetics and laser surgery
Premium Wordpress Themes by UFO Themes
WordPress theme by UFO themes