Enamel Defects in the Permanent Dentition: Prevalence and Etiology

Prevalence of DDE in the Permanent Dentition

Etiology of DDE in the Permanent Dentition

Enamel morphogenesis is a continuous, complex process that starts with the secretion of enamel matrix proteins followed by mineralization and finally maturation. This process has been shown to start at the cusps on the molars and the incisal part of the incisors, progressing to the cervical areas of the teeth [29]. However, there is still limited understanding of how mineralization progresses across the crowns of the teeth. This could be important in determining the timing of defects to relate to specific disturbances caused by systemic disorders. Disturbances in the different stages of enamel formation may result in a range of enamel defects with quite different clinical appearances and structural changes. Defective formation of the enamel matrix results in hypoplasia, a quantitative defect, depicted by generalized thinning or pitting types of defects (Fig. 2.1). Defective calcification of an otherwise normal fully developed organic enamel matrix results in hypomineralization, a qualitative defect (Fig. 2.2). This is seen clinically as changes in color and translucency of the enamel and presents as enamel opacities which can be either demarcated or diffuse [2, 30]. 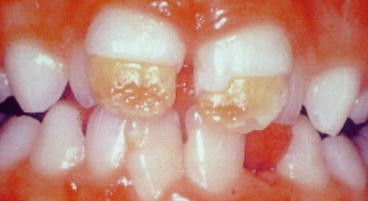 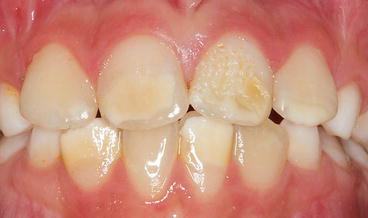 Fig. 2.2
Hypomineralization and hypoplasia of the maxillary and mandibular incisor teeth
Although the etiology of enamel defects may be attributed to local, systemic, genetic, or environmental factors, most are likely to be multifactorial in nature. This makes it difficult to identify a single cause for many cases of DDE. The time frame of exposure and the mechanism underpinning the causative factors determine the presentation of these defects. Defects on a single tooth or only a few teeth suggest a local etiological factor e.g. a defect in a permanent tooth due to damage (trauma or infection) to its primary predecessor (Fig. 2.3a–c). Alternatively, a systemic factor (both short and longer term) may affect all the teeth that are developing during the time of the insult and lead to what is described as a chronological defect. Genetic factors can be considered separately. Defects caused by genetic factors are most often (although not always) generalized in distribution, affecting both the primary and permanent dentitions. They may present as either enamel defects alone as seen in amelogenesis imperfecta (see Chap.​ 5) or as enamel defects associated with other general genetic disorders/syndromes (see Chap.​ 4). 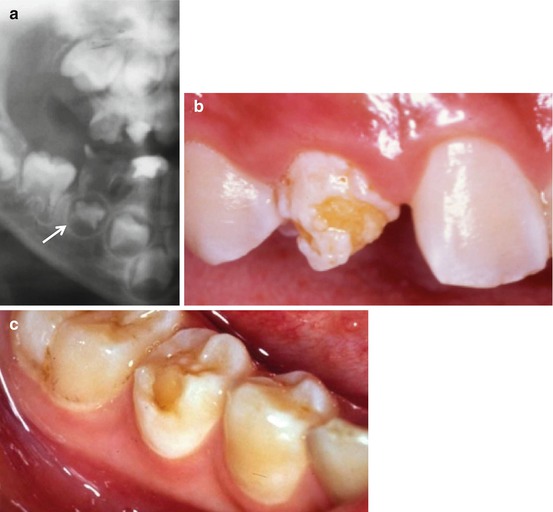 Fig. 2.3
(a) Caries in the mandibular second primary molar has led to the intra-radicular infection which has resulted in hypoplasia of the developing second premolar. (b) Hypoplasia of the maxillary permanent canine as a consequence of infection of the primary predecessor. (c) Hypoplasia in the form of missing enamel is exhibited by this mandibular second premolar following infection of the primary second molar
Enamel defects can be classified clinically as demarcated and diffuse opacities and hypoplasia. The location of isolated defects depends on the stage of amelogenesis at the time of the insult or injury [31]. The general consensus regarding the etiology of isolated opacities, which may be demarcated or diffuse and present as white, creamy, or yellow in color, is that amelogenesis is affected by a disturbance during the mineralization phase. It remains unclear why this would involve only an isolated patch of enamel on the crown and not the whole surface. Conversely, hypoplasia occurs when there is a disturbance during the secretory stage of amelogenesis while the enamel is only partly mineralized. Thus, enamel defects with similar presentations may have been caused by a variety of etiological factors. Furthermore, the same etiological factor can produce enamel defects with different presentations depending on the timing of the insult. Examples of this are commonly seen following primary tooth trauma. When a maxillary anterior primary tooth is intruded in infancy (during the first year of life), the crown of the permanent successor may suffer severe structural damage with missing enamel and even dilaceration of the root or the crown, while an intrusion in the later preschool years may only cause an isolated labial hypomineralized enamel opacity on the permanent successor (Fig. 2.4a, b). 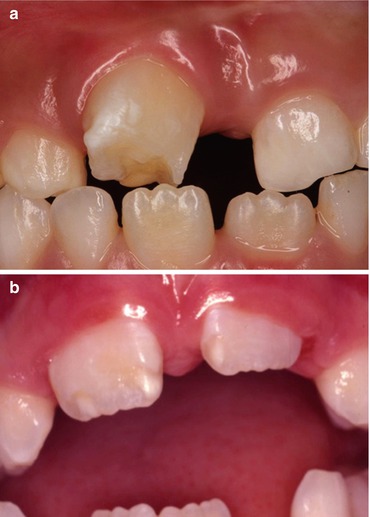 Based on the number of teeth affected, the possible etiological factors for DDE in permanent teeth can be categorized as being local or general. However the evidence is equivocal, with the majority of published reports being animal studies or case reports of children with specific systemic disorders. The putative etiological factors reported in the literature are summarized in Table 2.3. Only a few of these factors have good evidence supporting a direct causal effect, e.g., trauma to a primary predecessor or high levels of ingested fluoride during early childhood.
Table 2.3
List of etiological factors, reported in the literature, responsible for the formation of enamel defects in the permanent dentition
Only gold members can continue reading. Log In or Register to continue

Tags: Planning and Care for Children and Adolescents with Dental Enamel Defects
Oct 30, 2015 | Posted by mrzezo in General Dentistry | Comments Off on Enamel Defects in the Permanent Dentition: Prevalence and Etiology
Premium Wordpress Themes by UFO Themes
WordPress theme by UFO themes