Drugs for the Treatment of Central Nervous System Disorders

Many drugs have the ability to affect mental activity. Some are used in the treatment of psychiatric disorders. The dental health care worker is most likely to encounter the use of these agents in dental patients for whom they have been prescribed by psychiatrists or other physicians. Because these agents are so widely prescribed and can alter a patient’s dental treatment, the dental health care worker must understand their pharmacologic effects, adverse reactions, and dental implications.

Schizophrenia: Split or loss of reality

The psychoses are discussed first. Schizophrenia, the most common type of psychosis, is an extensive disturbance of the patient’s personality function with a loss of perception of reality. Schizophrenia is derived from the word meaning “splitting,” and in context it refers to the patient’s splitting from reality (not into multiple personalities). The patient’s ability to function in society is impaired because of altered thinking. The impaired thinking of patients with schizophrenia may be so detached from reality and their delusions or paranoia (e.g., someone is out to get me) so severe that their illness could lead to committing serious crimes, including assassination attempts or murders. Patients may suffer from hallucinations, delusions, or agitation. The positive symptoms of psychosis include agitation, and auditory hallucinations. Other patients may be introspective and uninvolved. The negative effects of psychosis include flat affect and apathy (Box 17-1).

The etiology of schizophrenia is not specifically known, but a familial pattern is often seen. The biochemical actions of the brain and even brain anatomy have been demonstrated to be different in some patients with schizophrenia from those in normal individuals.

Affective disorders include endogenous and exogenous depression and bipolar disorder or mania with or without depression.

Major depressive disorder, or depression, is the result of biologic, psychological, and social factors. Biologic factors consist low levels of the neurotransmitters serotonin, norepinephrine, and dopamine or a combination of the three in the brain. Psychological and social factors are related to specific external life events. Whether there are actually two types of depression separated by circumstances of occurrence is questionable. Theories for several different types of depression based on the biochemical situation in the brain have been developed, but no one has been able to demonstrate the types. Patients who exhibit alternating periods of depression and excitation (mania, elation) have bipolar (bi, two) depression, also known as manic-depressive disorder.

Anxiety Disorders are less severe than psychoses but can also be helped by drug therapy. Examples are anxiety, panic disorder, phobias, and obsessive-compulsive disorder. Psychophysiologic (somatic) disorders are those that have an emotional origin but manifest as physiologic symptoms. Personality disorders include sexual deviation, alcoholism, and drug dependence. Although many of these conditions are managed with the antidepressants and/or antipsychotics, the anxiety-related problems sometimes require the use of the benzodiazepines. Divisions of these different mental disorders have been and are continually changing to reflect either a greater knowledge or a political or “fad” perspective (What is “normal” anyway?).

Before the antipsychotic drugs were introduced into the management of psychiatric disorders, many physical methods were used to treat patients. Only electroconvulsive therapy (ECT, shock therapy) is still used in the treatment of depression. With the use of neuromuscular blocking agents, ECT therapy has become much safer. ECT produces the fastest results of any treatment for depression. It is reserved for patients whose disease is refractive to antidepressant therapy. Some memory loss occurs during the treatment (several sessions).

Use caution in verbal interaction with patient.

When treating patients with mental disorders, the dental hygienist should observe the following general precautions:

Communication: Patients with various mental disorders may perceive comments or movement from dental health care workers as threatening. Even normal office discussions may be perceived differently from how they are intended. For example, small talk with a peer may be interpreted as a conspiracy by the patient. What you say around and to the patient should be carefully monitored. (I once asked a patient, “How are you?” and the patient replied in a loud and angry voice, “Why are you asking me that question?”)
Compliance: Patients undergoing drug therapy for the treatment of psychoses often do not take their medication as prescribed. A thorough health history including the patient’s medication and its dosage should be obtained.
Suicide: Depressed patients may attempt suicide. When patients are severely depressed, they have no motivation and usually do not act on any irrational thoughts of suicide. After the start of antidepressant therapy, partial improvement gives them the motivation to attempt suicide before the full antidepressant effects have developed. Children and teens appear to be at a higher risk for suicide with antidepressant therapy, especially with the newer class of drugs. 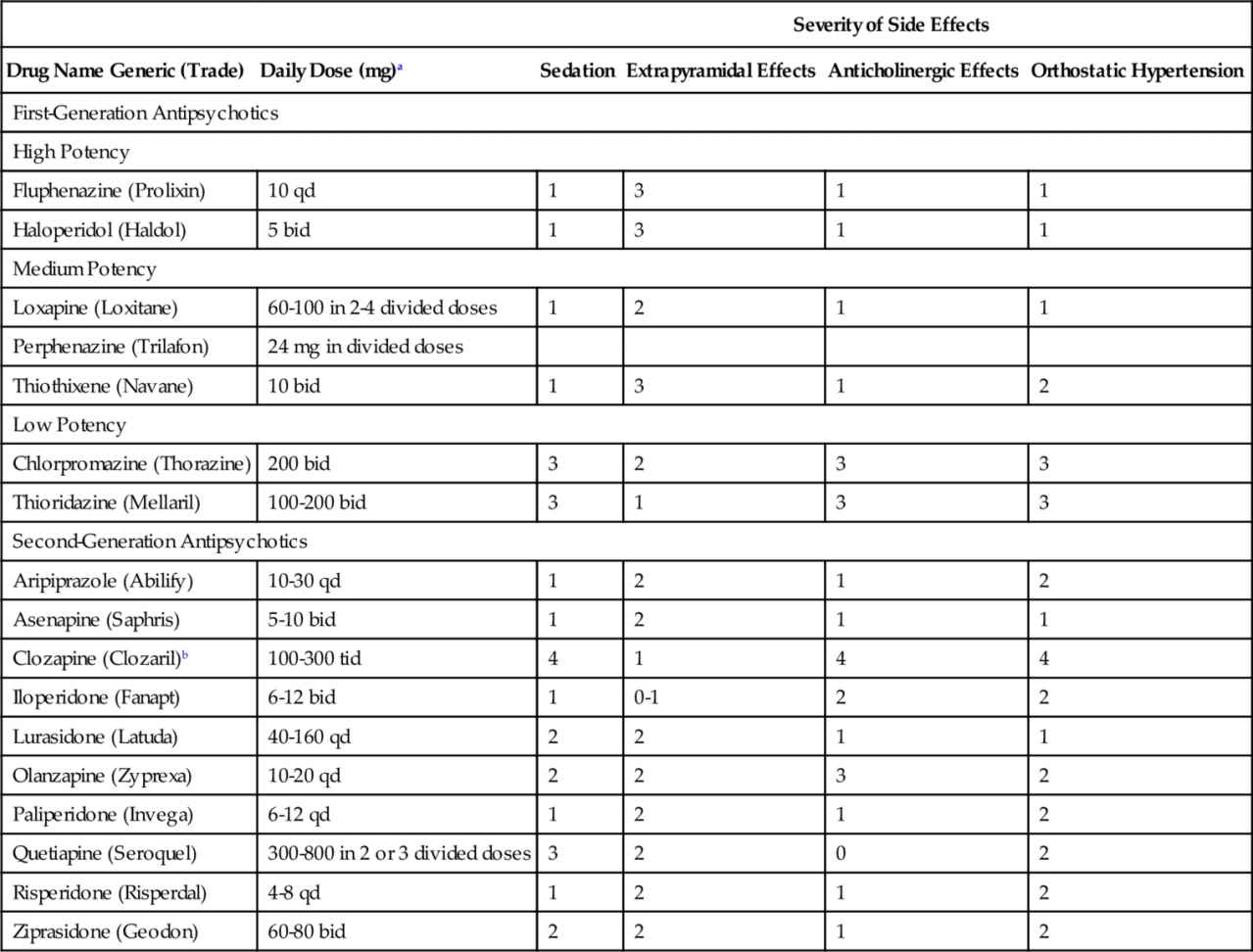 a Usual oral dose for outpatient treatment in mg/day.

The pharmacologic effects of the first-generation antipsychotic agents are as follows.

The antiemetic effect of first-generation antipsychotics is a result of depression of the chemoreceptor trigger zone, an area in the brain that causes nausea and vomiting. These agents are useful in the symptomatic treatment of certain types of nausea and vomiting. Historically, prochlorperazine (Compazine) has been used for this effect.

The most common type of adverse reactions associated with these agents results from stimulation of the extrapyramidal system. All first-generation antipsychotics have this effect, although the incidence of the reaction varies. The following types of extrapyramidal effects can occur:

Its onset is gradual and the movements are coordinated and rhythmic. This effect is exacerbated by drug withdrawal. The involuntary movements, especially those involving the face, jaw, and tongue, can make home care difficult if not impossible. Performing oral prophylaxis is difficult because of the strength of the oral facial and tongue muscles.

The dental hygienist should discuss the patient’s side effects with his or her physician if oral prophylaxis cannot be performed. A dosage or drug change may be instituted by the patient’s psychiatrist. With the availability of the second-generation agents, extrapyramidal side effects can be greatly minimized.

The extrapyramidal side effects of first-generation antipsychotics can cause severe intermittent pain in the region of the temporomandibular joint (TMJ). This pain is produced by a spasm of the muscles of mastication. In an acute attack, it becomes difficult or impossible to open or close the jaw. Should muscle spasm be present, force should not be exerted to open the patient’s mouth for dental treatment because dislocations of the mandible can occur.