Drugs for the Treatment of Allergic Rhinitis

Allergic rhinitis is an inflammation of the nasal airways that occurs when an allergen is inhaled in an individual with a sensitized immune system. The allergen triggers the response of the antibody immunoglobulin E (IgE), which binds to mast cells and basophils containing histamine. The release of histamine causes itchy, watery eyes and runny nose. Symptoms vary in severity among those affected by allergies. Allergic rhinitis can be seasonal or perennial. Seasonal allergic rhinitis is usually caused by pollen from trees, grass, and flowers and lasts several weeks to months. Perennial allergic rhinitis is a result of sensitivity to different allergens, such as house dust and animal dander, and lasts throughout the year. Figure 20-1 illustrates the inflammatory process.

The most effective method of treating allergic rhinitis is to eliminate the source of allergen. If this is not possible, medication is necessary.

The common term antihistamine refers to agents that are H1 antihistamines or H1-blockers. They are widely used drugs, and dental hygienists should be familiar with them for the following reasons:

• Many patients have seasonal allergies or allergic rhinitis (e.g., hay fever) that make dental treatment difficult. The dentist may prescribe, or the patient may self-medicate with, antihistamines before a dental procedure to reduce the symptoms of hay fever and make it easier for the patient to breathe.
• A mild allergic reaction to a drug may be treated with antihistamines in the dental office. If the allergic reaction is severe, epinephrine is the drug of choice.
• Patients taking antihistamines may experience side effects, such as xerostomia, but the second-generation antihistamines have less anticholinergic effect.
• Antihistamines, especially first-generation, interact with many other drug groups and their central nervous system (CNS) effects are additive with those of other CNS depressants. 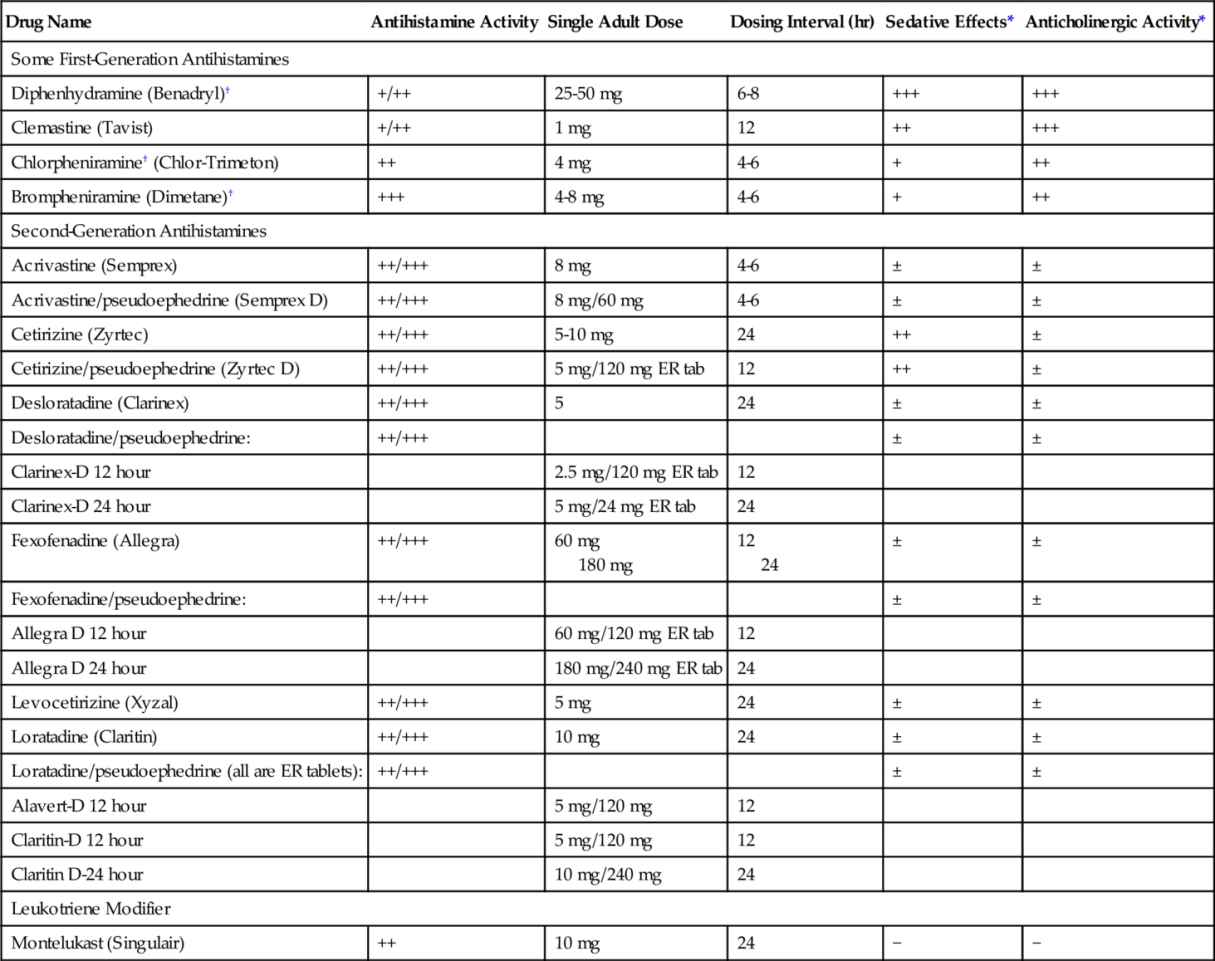 † Available over the counter.

The pharmacologic effects of antihistamines can be divided into those caused by blocking of histamine at the H1-receptor and those independent of this effect.

Antihistamines, which are H1-antagonists, competitively block or antagonize histamine’s effect at the following sites:

Capillaries permeability: When the capillary permeability produced by histamine is blocked, less tissue edema occurs from the transport of the serum into the intracellular spaces.
Vascular smooth muscle (vessels): The antihistamines block the dilation of the vascular smooth muscle that histamine produces.
Nonvascular (bronchial) smooth muscle: Because other autocoids (physiologically active substance produced by and acting within the body [i.e.; bradykinin]) are also released in an anaphylactic reaction, antihistamines are not effective in counteracting all the bronchoconstriction present during that reaction.
Cutaneous nerve endings: Antihistamines can suppress the itching and pain associated with histamine-mediated release of inflammatory chemical mediatiors (cytokines, leukotrienes, prostaglandins) at the cutaneous nerve endings.

Other Effects (Unrelated to H1-Blocking Effects)

Tags: Applied Pharmacology for the Dental Hygienist_nodrm
Apr 12, 2015 | Posted by mrzezo in Dental Hygiene | Comments Off on Drugs for the Treatment of Allergic Rhinitis
Premium Wordpress Themes by UFO Themes
WordPress theme by UFO themes