This chapter discusses the second of the three major discrepancies (vertical, transverse, and anteroposterior) that might be encountered in planning treatment for the orthodontic patient. Two of the most common transverse discrepancies are anterior and posterior crossbites. Skeletal and dental asymmetries are also important issues to consider in the overall treatment plan.1

At the first stage of diagnosis and treatment planning, dental or skeletal crossbites should be considered along with the orthopedic problem because they can affect mandibular movements, temporomandibular joint (TMJ) function, and periodontal health such as gum recession and loss of bony support owing to traumatic occlusion (Fig 7-1). Posterior crossbites are mainly the result of maxillary dental arch constriction, either unilaterally or bilaterally; thus, expansion of the maxillary arch is necessary to obtain a harmonious transverse relationship within both dental and skeletal structures. If the skeletal posterior crossbite is in question, the expansion should be done with a fixed expander.1

The rapid maxillary expander (RME) has been used for years to obtain skeletal expansion by opening the midpalatal suture to widen the transverse dimensions of the maxillary arch. The most common and hygienic type of expander is the hyrax screw. In the transitional dentition, only the maxillary first molars are banded, and the arms of the appliance are extended up to the primary canines (Fig 7-2).

Fig 7-1 (a) Traumatic occlusion due to anterior crossbite in the transitional dentition. (b) The problem was corrected easily using a removable appliance.

Fig 7-2 In the transitional dentition (a), the arms of the hyrax screw RME can be extended up to the canines (b).

In children and adolescents, the screw is turned a quarter turn once or twice a day; theoretically, an expansion of 0.25 to 0.5 mm/day can be obtained. In each quarter turn, approximately 0.9 to 4.5 kg of force is applied to the teeth.2 The expansion force affects all the facial sutures, especially the midpalatal suture. As expansion progresses, a large median diastema appears, indicating opening of the suture. This diastema closes spontaneously with the pull of the transseptal fibers. As the transverse dimension of the maxillary dental arch increases, the palatal vault depth decreases, increasing the volume of the nasopharyngeal airway.1,3 At the end of the expansion process, some dental and skeletal relapse is expected as a result of buccal tipping of the teeth as well as resistance of the surrounding musculature. Overexpansion is usually necessary until the palatal cusps of the maxillary teeth contact the lingual aspects of the buccal cusps of the mandibular molars to compensate for the relapse. The expander should be kept in place for at least two-thirds of the overall duration of treatment (ie, approximately 9 to 10 months) for stability.

When the amount of force is over the optimum limit necessary for tooth movement, skeletal expansion is observed before tooth movement. The most suitable time for transverse expansion is either the primary or transitional dentition.4–12 Most authors agree that rapid maxillary expansion should be performed before the midpalatal suture closes. The time of ossification of the midpalatal suture, however, is controversial.13 Rapid expansion can also be applied at later ages; however, bone density in adults limits the stability as well as the range of transverse expansion.6,12,14–18

During rapid maxillary expansion, the maxillary alveolar bones rotate around a point in the nasal cavity near the frontomaxillary suture, creating a triangle with the apex oriented superiorly19 (Fig 7-3). In addition, it has been shown that A-point comes forward as a result of expansion.20,21 As the molars and premolars tip buccally, the palatal cusps move downward and make premature contact with their antagonists, stimulating clockwise rotation of the mandible. In high-angle cases, lower facial height may increase and the soft tissue profile may worsen. It has been shown that 30% of patients presenting with clockwise rotation after rapid maxillary expansion return to their original condition; however, 30% remain the same, and 40% continue to open.22 Bite opening due to expansion can be avoided with the use of an expander combined with a posterior bite block.23 Correcting buccal tipping of the posterior teeth by placing buccal torque in the archwire or transpalatal arch results in extrusion of the buccal cusps rather than intrusion of the palatal cusps, so it does not eliminate the increase in lower facial height. That can be done with posterior bite blocks, which control facial height by limiting extrusion of the palatal cusps. 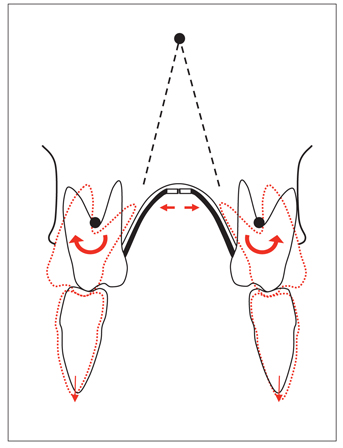 Tags: Biomechanics in Orthodontics Principles and Practice
May 22, 2016 | Posted by mrzezo in Orthodontics | Comments Off on Correction of Transverse Discrepancies
Premium Wordpress Themes by UFO Themes
WordPress theme by UFO themes