Beautiful white teeth were already important to the Romans. They polished their teeth using urea (carbamide), especially urea from Portugal because this was known to give the teeth a brillant white appearance. During the Middle Ages, tooth bleaching was a barbaric treatment. The barbers not only extracted teeth, they also bleached teeth with aqua fortis, a mixture containing nitric acid. This treatment was initiated by first filing the patient’s teeth—today one would call the process “recontouring”—with an iron grater. At the beginning of the 20th century, teeth were bleached with high concentrations of hydrogen peroxide (H2O2). The micro abrasion technique, i.e., the use of a weak hydrochloric acid solution, was used to remove stains. These treatment methods were first published in 1895 in the American Journal of Dental Science (Westlake 1895). At the beginning of the 20th century, “Colorado brown stains,” a form of fluorosis, were also removed with diluted hydrochloric acid (micro abrasion) and hydrogen peroxide (bleaching). 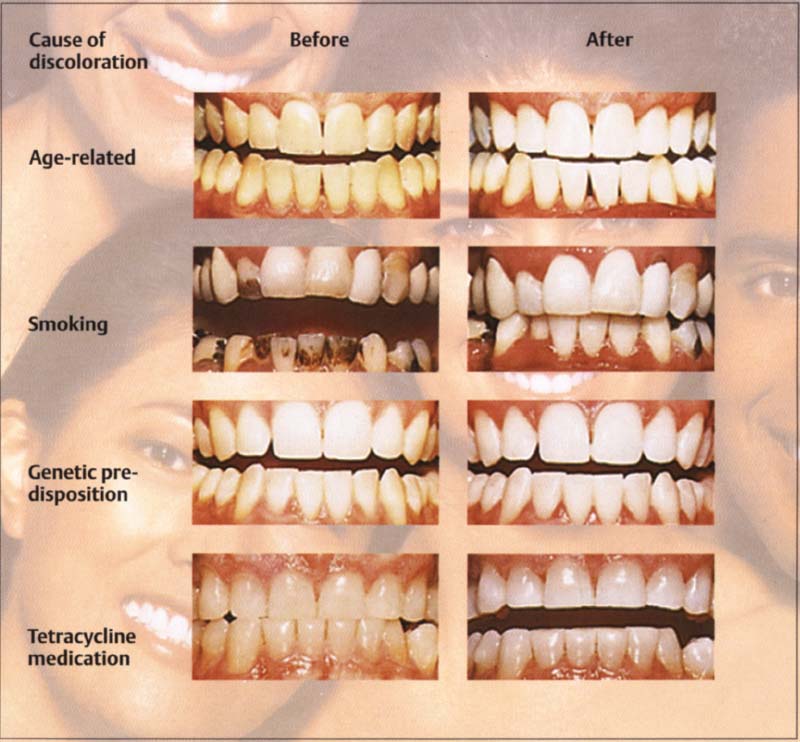 50 Various causes of teeth discoloration before and after bleaching

Many teeth have discolored surfaces. As one ages, teeth become darker and change to a brown-orange color. In addition, external effects of tooth discoloring are observed, such as those from smoking and some beverages (coffee, tea, red wine, etc.). However, discolorations are also due to genetic conditions or caused by the use of certain medicines (tetracycline).

Bleaching in the Practice

At the end of the 19th century, dentists began to bleach vital teeth. Westlake (1895) used a mixture of peroxide and ether. Abbot used Superoxol, a stabilized mixture consisting of 30% H2O2 to bleach teeth discolored by fluorosis (Abbot 1918; Prinz 1924). Ames earned his fame with a mixture consisting of 30% H2O2 and ether that he used with a source of heat (Ames 1937). Indeed, a treatment lasted approximately 30 minutes and the sessions were repeated up to 25 times.

Zack and Cohen (1965) were the first to conduct a scientific evaluation on how the effect of the source of heat affected the pulp. They found no pulp damage. The results were later confirmed by Nyborg and Brännström (1970).

Since 1972 Arens has also tried to bleach tetracycline discolorations with 35% Superoxol kept at a temperature of 10 °C below the pain threshold.

The orthodontist Klusmier from Fort Smith, Arkansas, had, like so many other orthodontists, patients with problematic gingivitis. He examined the effect of Gly-Oxid (Marion), which his young patients used during the night in a removable appliance. This treatment resulted in a close-to-healthy gingiva. After some patients had used this gingivitis therapy for some time, Klusmier discovered that the teeth had become brighter and that lighter tetracycline discolorations had disappeared. He presented his observations between 1970 and 1975 at different “table clinic” meetings. In 1972 he experimented with the somewhat thicker Proxigel (Reed & Carnrick Pharm.) retained in a tray. 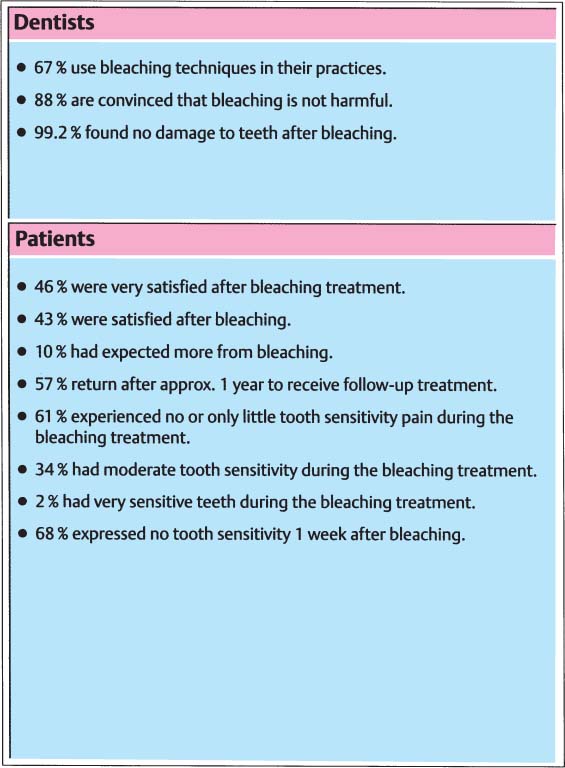 51 Survey of dentists opinion on bleaching

Survey of members of the American Academy of Cosmetic Dentistry, conducted in 1992.

The periodontist Wagner, a colleague of Klusmier’s, explored the use of the method in adults and subsequently discovered that the gingiva was somewhat less inflamed and that the teeth appeared whiter. Slowly the method spread and was adopted in 1988 by Haywood at the University of North Carolina. Haywood and Heymann (1989) developed a home bleaching technique that is still the currently used standard of care.

Carbamide peroxide has been long known among periodontists as an oral antiseptic substance. Munro described in 1968 that as a side effect of using carbamide peroxide in a splint, the teeth became whiter.

Vital and nonvital tooth bleaching has not been around for very long, which is reflected in the list of commercial products being introduced on the market:

The sales figures during the past 4 years have more than quadrupled. Bleaching is popular: patients wish to have white teeth and dentists see this as a new area to do business in.

A survey conducted by the Clinical Research Associates in 1994 gave an extremely positive trend: 92% of the 7 617 dentists surveyed bleached their patients’ teeth patients as a matter of routine—in more than 90% of cases to the fullest satisfaction of the patients.

Only few innovations have had such a high degree of acceptance among both the public and professionals.

Haywood published his first studies in 1990. Extracted teeth were bleached for 5 weeks in the usual manner. Examination of the teeth using the scanning electron microscope revealed no changes in the enamel. The type of bleaching materials used did not affect the topography of the enamel.

In 1991 Yarborough published a literature review of the topic regarding effectiveness and safety of bleaching. Bleaching can be performed effectively with two substances, namely carbamide peroxide and hydrogen peroxide. Carbamide peroxide disassociates into H2O2, CO2, urea, and NH3. H2O2 is the effective agent here as well. Bleaching with H2O2 has the advantage that it takes place 3 to 6 times faster than with carbamide peroxide.

Murchison examined the effect of carbamide peroxide on enamel and concluded that a short-term application did not cause any significant change to the surface and physical properties of enamel (Murchison et al. 1992).

The majority of scientific studies show that it is safe to bleach teeth with 10% carbamide peroxide (Haywood 1992). 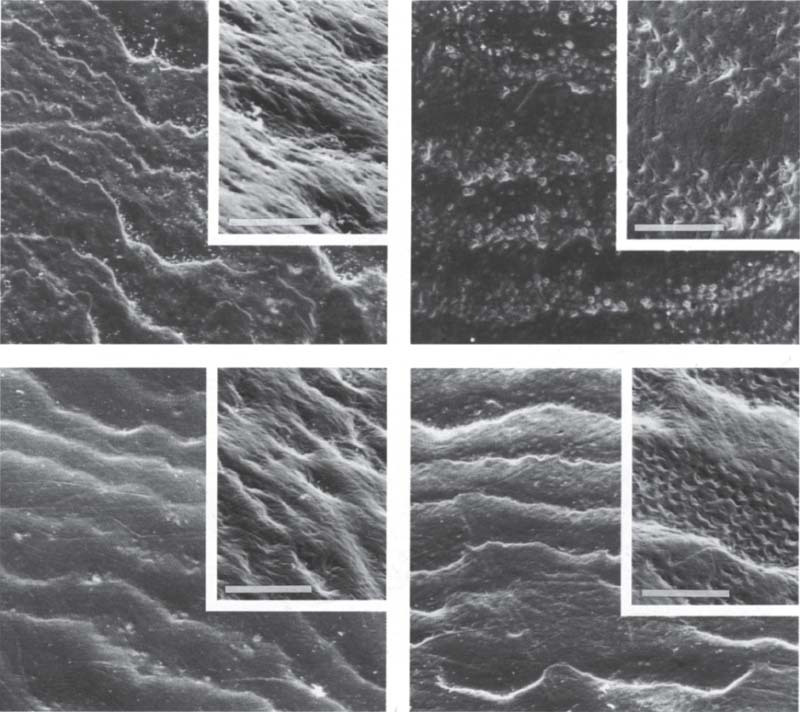 52 Effect of bleaching on micro hardness and morphology of enamel

Left (above): A natural enamel surface exhibits well-defined perikymata with irregular contours. It was used as a control and placed in saline.

Right (above): This enamel surface was etched too aggressively (50% H2O2). It is relatively porous and has poorly defined perikymata.

Left (below): Enamel bleached with Accel (35% H2O2) has clearly defined perikymata and a smooth surface. It was not damaged by bleaching.

Right (below): The enamal appears to be relatively intact after the surface was bleached with HiLite (main component also 35%H2O2).

A Review of Bleaching Methods

To bleach vital teeth, chemicals are placed on the enamel surface. This method is called external bleaching and can thus only change the discoloration of enamel.

To bleach nonvital teeth, the chemicals are placed in the pulp chamber. In this way the coronal dentin is changed. The process is called internal bleaching.

These are very aggressive bleaching methods that were used previously when bleaching was done in-office: usually 33% H2O2 was used together with heat and light. Damage to enamel could occur with this method. The technique has been named power bleaching.

Bleaching teeth in the dental practice continues to play an important role. For example, when front teeth are treated with veneers, the cuspids can be brightened up by in-office bleaching. If one wants to achieve results very quickly, then in-office bleaching is preferred to home bleaching. Stronger chemicals are applied in such situations, but no additional energy sources (heat and light) are used. In most cases, three bleaching treatments are necessary.

—The dentist needs to spend very little time treating the patient. A requirement is that the dentist has a dental assistant or hygienist who has the necessary qualifications needed for instructing the patient about the home bleaching procedure.

—This bleaching technique is usually more affordable than the in-office bleaching.

—The patients bleach their teeth whenever they wish to do so. They do not have to come to the dental office to do this.

—In home bleaching, in contrast to in-office bleaching, no rubber dam is required. Many patients have an acquired latex allergy and cannot tolerate the rubber dam.

—The bleaching process takes longer and is therefore safer for teeth.

—Patients must collaborate actively. If they do not wear the bleaching tray, no therapuetic effect will occur. If they use their tray too much each day, the result is often hypersensitive teeth.

—There are patients who prefer to get their teeth bleached by the dentist or dental staff, even if this is means higher costs and longer treatment times.

Side Effects of the Bleaching Agent

—Bleaching agents contain peroxides. These enhance mutagenic effects of other chemicals, such as those present in cigarette smoke. Based on present scientific knowledge, patients should not smoke while wearing a bleaching tray. In the long run, the peroxides can also change oral flora. If bleaching is done over too long a period of time, Candida albicans can accumulate and hypertrophy of the papillae can occur.

—Power bleaching changes the structure of the hard tooth tissues and resulted in pulpitis in an animal experiment.

—A common adverse effect that occurs during bleaching is temporary hypersensitivity. This disappears in almost every case when the bleaching process is interrupted and the teeth are remineralized using a toothpaste containing fluoride.

—During in-office bleaching, etching bleaching agents are used. If the gingiva is not protected it can be etched. However, the damage is temporary and disappears after a few days.

—Patients with tooth hypersensitivity should not have their teeth bleached because of the risk of postoperative sensitivity.

—When bleaching nonvital teeth, root resorptions may occur. Since the teeth are prepared internally, crown fractures are also possible.

—No restorations should be bonded directly after bleaching because the bonding ability of the adhesive material is greatly reduced. A period of approximately two weeks should elapse before any resorations are bonded.

—The patient should be informed that the bleaching result will decrease with time and it may be necessary to do a supplementary bleaching (after approximately one year). This change in color has several causes (coffee, red wine, fruit juices, soft drinks, and other drinks with low pH-values, smoking, etc.). As long as these external factors are present, the teeth will become darker. 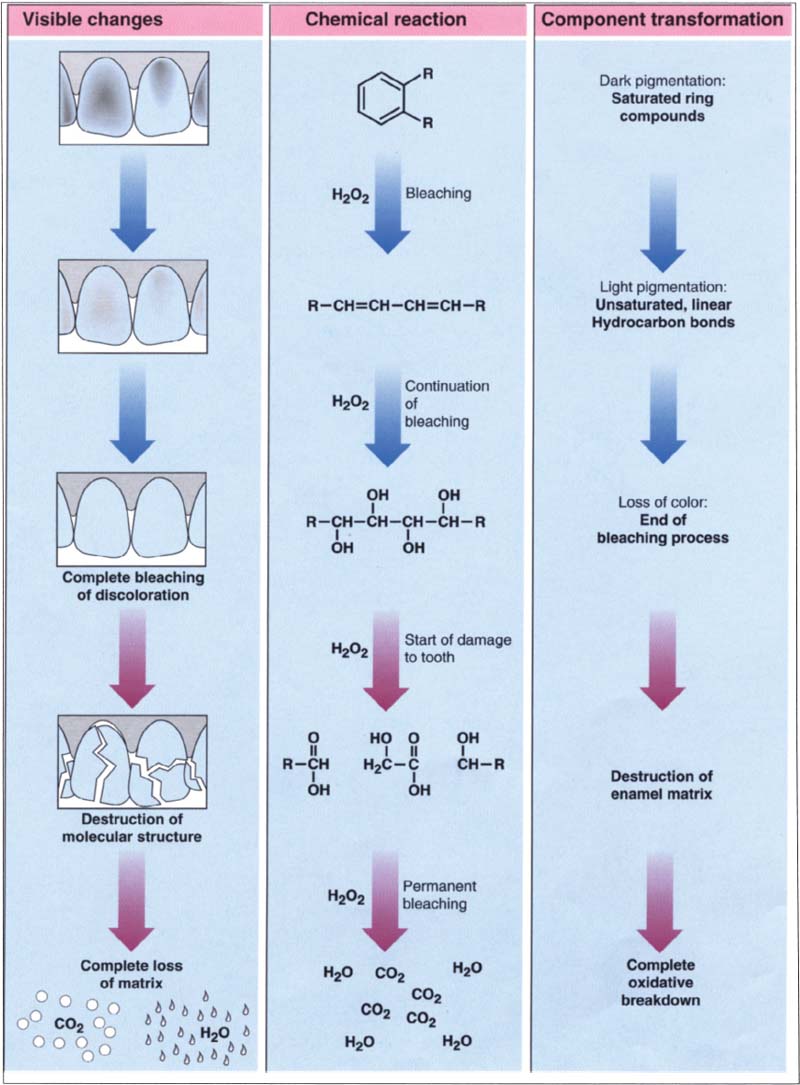 53 Chemistry of the bleaching process

When bleaching teeth, oxidation reactions take place. After a certain amount of bleaching time, the enamel surface is saturated with the bleaching agent. When this happens, the bleaching process must be stopped, because otherwise the enamel could be damaged.

Despite these potential risks, bleaching of vital and nonvital teeth is the most conservative therapy available in dentistry.

Which Discolorations Can Be Bleached?

Tetracycline discolorations can be brownish, grayish, or bluish. They usually occur bilaterally and can involve several teeth in both upper and lower jaws. If the anterior baby teeth are involved, the tetracycline discoloration was induced some time between the fourth month of pregnancy and the ninth month after birth. However, if the permanent front teeth are discolored, the tetracycline medication most likely occurred between the third month after birth up to the seventh year of age. 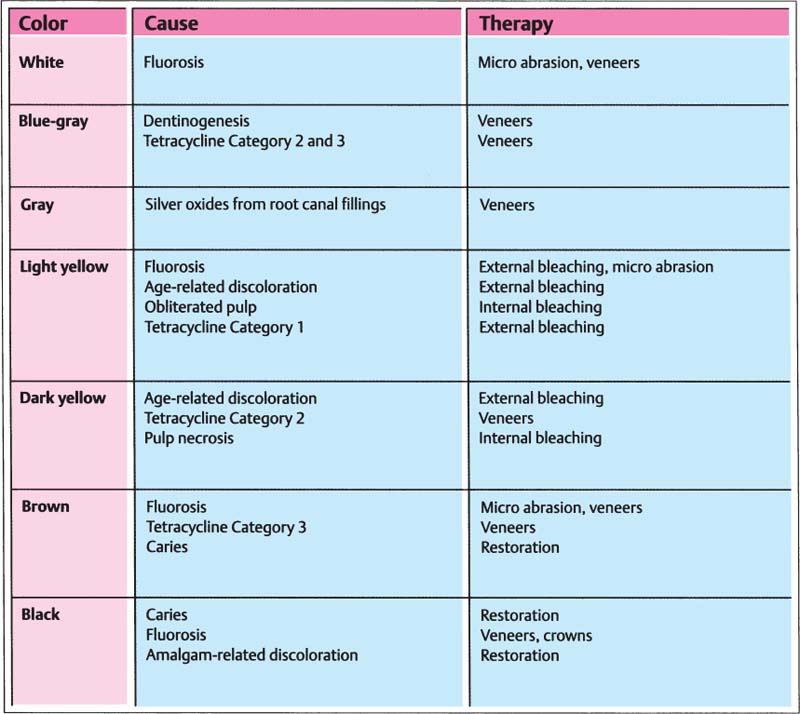 54 Causes and therapy of tooth discoloration

The best results with bleaching are achieved with color changes caused by the aging process, light fluoroses, and tetracycline discolorations of Category 1. All other discolorations should be treated using restorative methods.

The three categories of tetracycline discolorations are:

A strong, but even discoloration that can normally be removed after five to seven in-office bleachings, or after four to six weeks of treatment with the home bleaching method.

Dental fluorosis can be induced between the second trimester of pregnancy and the ninth year of age, i.e., during tooth development when fluoride uptake is in excess of 1 ppm in the drinking water. (The fluoride level of the drinking water should be checked before fluoride medication is prescribed.) The degree of tooth discoloration—which varies from slightly chalky to strong yellow-brown spots due to precipital accumulations (secondary) after the eruption of the teeth—correlates directly with the fluoride uptake. The discolorations are restricted to the enamel (true enamel formation defects or hypoplasia); they are usually found bilaterally and in both jaws.

Bleaching is only successful when the enamel discolorations are superficial. A combination of micro abrasion and bleaching (two to four bleaching treatments), followed by facets or reconstruction of the enamel with microfilled composite is the treatment of choice. Alternatively, veneers can be made.

These discolorations are innate or acquired during enamel formation and result from incomplete mineralization, due to a trauma, high fluoride exposure, genetic disposition, or illness. Acquired white spots are incipient carious lesions caused by plaque. They are often found around orthodontic brackets. T/>