Bioactivity of Mineral Trioxide Aggregate and Mechanism of Action

4.3 In Vitro Bioactivity of MTA

4.3.1 Direct Demonstration of In Vitro Bioactivity

The in vitro bioactivity of MTA and MTA-like materials is tissue independent and may proceed sequentially in stages that parallel those proposed for bioactive glasses. For comparative purposes, a similar sequence of events will be used in this discussion. These stages are schematically represented in Fig. 4.1. 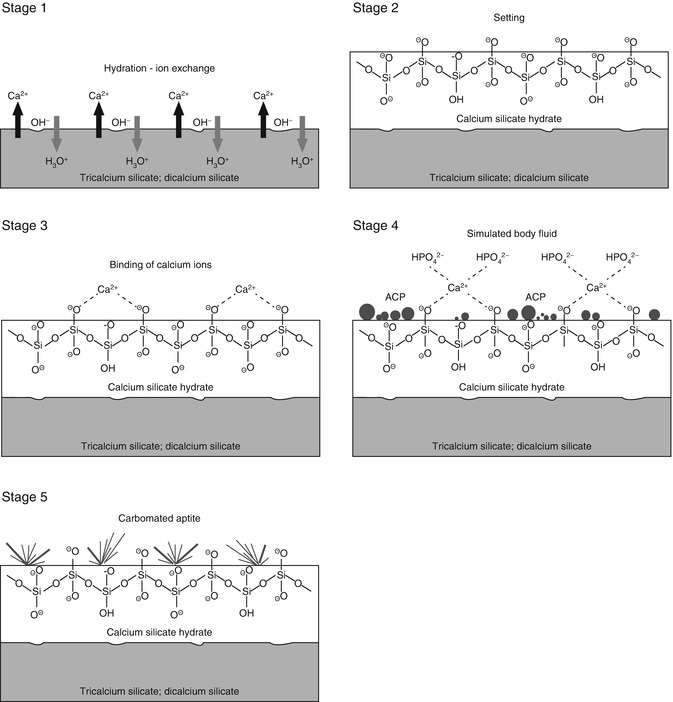 Fig. 4.1
A schematic of the five sequential stages of events that contribute to the manifestation of in vitro bioactivity of hydraulic calcium silicate cements after the latter is immersed in simulated body fluid (not to scale). ACP amorphous calcium phosphate
Taken together, evidence is abundant in the literature showing that hydraulic calcium silicate cements exhibit in vitro activity. However, these studies were not performed as rigorously as those examining bioactive glasses. Although there have been attempts to compare the in vitro bioactivity of different commercially available or experimental hydraulic calcium silicate cements, most of the works were qualitative in nature. In particular, there was no adoption of a matrix such as the use of an in vitro version of the Bioactive Index, in systematically quantifying the percentage of the cement surface covered by calcium phosphate salts or the variation in thickness of the apatite or apatite-like mineral layer over time.

4.3.3 Indirect Evidence of In Vitro Bioactivity

Interestingly, in vitro bioactivity of hydraulic calcium phosphate cements was demonstrated in dentine instead of bone. Sarkar et al. [137] were the first to show the formation of an apatite-rich interfacial layer along the cement–dentine interface when grey MTA was placed on top of dentine and immersed in phosphate-containing fluid for 2 months in vitro. According to the authors, this interfacial layer was firmly attached to the dentinal walls with no observable gap between the interfacial layer and dentine. Subsequently, Reyes-Carmona et al. [128] reported the formation of a similar interfacial layer along the cement–dentine interface after ProRoot MTA, MTA Branco and MTA BIO were immersed in phosphate-buffered saline for 2 months in vitro. Apatite-rich tags were also demonstrated in the dentinal tubules and their lateral branches. Han and Okiji [70] demonstrated similar interfacial layers and taglike structures within dentinal tubules after white ProRoot MTA (Dentsply Tulsa Dental Specialties) and Biodentine (Septodont, Saint-Maur-des-Fossés, France) were placed in instrumented root canals of bovine incisors that were irrigated with ethylenediaminetetraacetic acid and sodium hypochlorite and followed by immersion in Ca- and Mg-free phosphate-buffered saline for up to 3 months.
The mechanism involved in formation of an interfacial cement–dentine layer with the use of hydraulic calcium silicate cements is different from what occurs in dentine bonding or with the use of glass ionomer cements. In the absence of adjunctive chemical treatment, it is not possible for an inorganic layer to bond chemically or even interlock mechanically with the surface of highly mineralised dentine, which consists predominantly of mineralised type I collagen. In dentine bonding, for example, bonding of adhesive resin monomers to dentine is achieved by demineralisation of the dentine surface with acid or acidic resin monomers to create a partially demineralised collagen matrix. Hydrophilic adhesive resin monomers infiltrate this collagen matrix and polymerise in situ to create a hybrid layer that bonds the pure resin layer above to the mineralised dentine below [122, 159]. In glass ionomer cements and resin-modified glass ionomer cements, chemical bonding occurs after treatment of the dentine with polyalkenoic acid. An interfacial zone or intermediate layer is created between the glass ionomer cement and dentine, which represents the summation of the infiltration of polyalkenoic acid and subsequent deposition of ion-exchange reaction products into the partially demineralised collagen matrix [150, 170].
In the case of calcium silicate cements, a new type of interfacial interaction known as the ‘mineral infiltration zone’ has recently been reported [6]. In this interaction, the highly caustic (alkaline) calcium silicate cement hydration products are responsible for the degradation of the collagenous component of intertubular dentine. A porous intertubular dentine layer is produced in which the collagen fibrils are depleted, leaving behind porous ‘mineral ghosts’ [102] that enable the permeation of high concentrations of calcium, hydroxyl and carbonate ions to form a hypermineralised layer [6]. Such a process has been termed ‘alkaline etching’ [6], to distinguish it from the ‘acid etching’ process associated with the use of dentine adhesives and glass ionomer cements. Prior to this report (Atmeh et al.) [6], a similar hypermineralised layer was observed on the of the resin-dentine interface (i.e. hybrid layer) when set white Portland cement was used to remineralise hybrid layers created in severely compromised bonded dentine [102]. Whilst this ‘mineral infiltration zone’ enables a calcium silicate cement to ‘bond’ to dentine, it is likely to be highly brittle because type I collagen, which is responsible for the toughness of biological mineralised tissues [8, 94], is destroyed by the alkalinity of the calcium silicate cements. It has been shown that hypermineralisation of cortical bone produces localised regions with reduction in fracture toughness that are prone to subcritical crack formation within the hypermineralised region [9]. These cracks provide sites for crack initiation following an impact. Similarly, dentine with high mineral/collagen ratios exhibits reduction in flexural strength and energy to fracture [132], which may contribute to increase in brittleness and decrease in fracture toughness of human dentine with age [83, 113]. To date, the long-term effect of taking advantage of the in vitro bioactivity of calcium silicate cements to bond to dentine is unknown, particularly for dental restorative procedures that involve placement of a fast-setting calcium silicate cement in dentinal cavities as a dentine replacement material [23].