Fig. 3.1
Retrograde cavity filled with Mineral Trioxide Aggregate (MTA) showing the formation of mineralized tissue close to the filling material and periapical repair. Original magnification × 100. H&E (Reprinted from Tanomaru-Filho et al. [173] copyright 2006, with permission from Elsevier)
The periapical tissue response of other retrofilling materials such as intermediate restorative material (IRM), thermoplasticized gutta-percha, reinforced zinc oxide cement (super EBA), and mineral trioxide aggregate (MTA) was studied in a dog model. Better reestablishment of the periapical tissues was observed with IRM and MTA. New hard tissue formation was observed directly over the material surface only in the MTA sections. MTA exhibited the most favorable periapical tissue response (Fig. 3.2) when comparing the biocompatibility with other tested materials [192]. 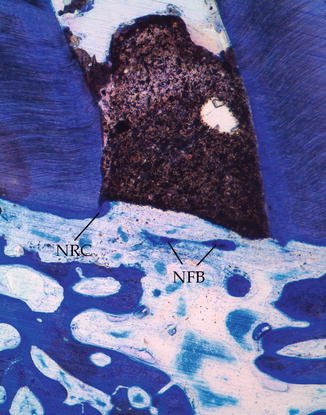 Fig. 3.2
Histologic section (magnification × 4) of a retrograde cavity filled with MTA in dog’s teeth shows newly formed cement (NRC) growing from the periphery over the mineral trioxide aggregate surface and islands of newly formed bone (NFB) in close vicinity to the mineral trioxide aggregate surface (Reprinted from Wälivaara et al. [192] copyright 2012, with permission from Elsevier)
MTA has also been designed to seal communication between pulp cavity and periodontium, and the histologic response to intentional perforation in the teeth’s furcations of dogs repaired immediately with amalgam or MTA showed that MTA is more suitable than amalgam for perforation repair, particularly when it is used immediately after perforation [73]. The periradicular tissue response to MTA exhibited less periradicular inflammation and more fibrous capsules adjacent to MTA in comparison to amalgam. In addition, the presence of cementum over the MTA surface was observed [176]. The healing process of intentional lateral root perforation repaired with mineral trioxide aggregate (MTA) was observed in dogs’ teeth (Fig. 3.3) showing no inflammation and deposition of cementum over MTA [88]. The biological response of the periodontium adjacent to furcation perforations in rat molars filled with Endo CPM Sealer, MTA Angelus, or zinc oxide-eugenol cement has also been evaluated. The greatest number of inflammatory cells was observed at 7 days, especially in the zinc oxide-eugenol (ZOE) group where the inflammatory process was related to a significant increase in the number of osteoclasts and, thereby, in an increase in the width of the periodontal space. At 60 days, no significant differences in osteoclast numbers among Endo CPM Sealer, MTA, and control groups were evident. The periodontal space was also significantly reduced in the experimental groups in comparison with the initial periods. The periodontium adjacent to perforations filled with MTA and Endo CPM Sealer exhibited clear evidence of reestablishment and thus demonstrated better biocompatibility than zinc oxide-eugenol (Fig. 3.4) [51]. Contaminations of lateral perforations can impair the healing process. Regardless the use of MTA, contaminated lateral root perforations immediately sealed with MTA presented worse repair than the non-contaminated ones [87]. 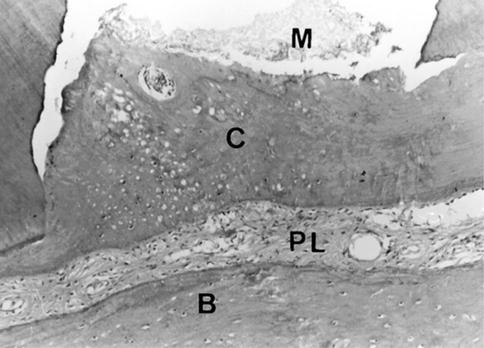 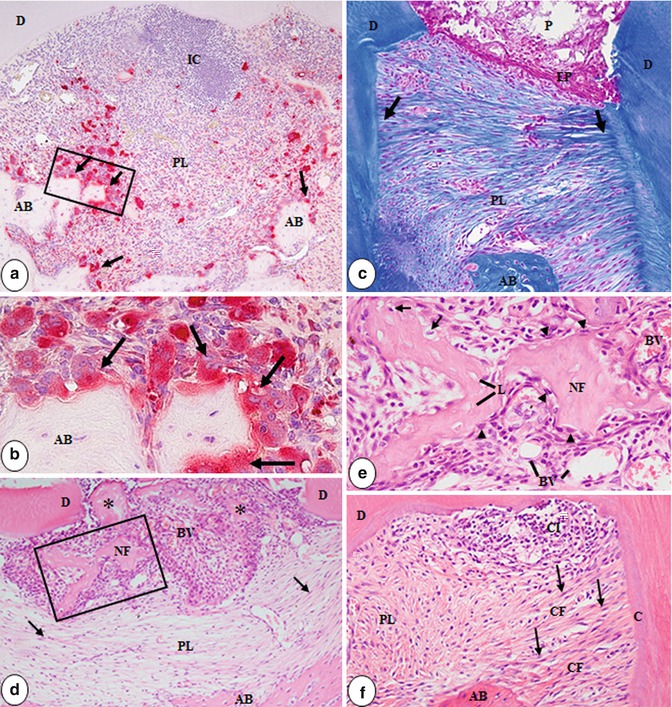 Fig. 3.4
Light micrographs of furcation region of molar teeth perforated and filled with MTA and examined after 7 (a, b), 15 (c), 30 (d, e), and 60 days (f). In (a), numerous inflammatory cells (IC) are present in the wide periodontal space. Tartrate-resistant acid phosphatase (TRAP)-positive osteoclasts (arrows) are next to the alveolar bone (AB) surface. TRAP reaction counterstained with hematoxylin. D dentin, PL periodontal ligament (bar, 100 lm). In (b), outlined area of (a), TRAP-positive osteoclasts (arrows) are adjacent to the bone surface. AB, alveolar process (bar, 50 lm). (c) Shows a layer of two to three elongated cells (EP) between the perforation in the floor of the pulp chamber (P) and the periodontal ligament (PL). In the PL, some bundles of collagen fibers (CF) penetrate into the root surfaces (arrows). D, dentin; AB, alveolar process. Masson’s trichrome (bar, 100 lm). In (d), acidophilic and irregular material (NF) fills partially the perforation of the floor of the pulp chamber and is surrounded by numerous mononuclear cells and blood vessels (BV). Collagen fibers and fibroblasts (arrows) seem to be surrounding the material “NF.” PL, peridontal ligament; D, dentin; AB, alveolar process. H&E (bar, 100 lm). In (e), outlined area of (d), homogeneous material “NF” contains lacunae (L) and, sometimes, cells inside them (arrows). Elongated and rounded cells (arrowheads) are in close juxtaposition to the irregular surface of “NF.” BV, blood vessels. H&E (bar, 50 lm). In (f), some inflammatory cells (IC) are adjacent to the root surface. In the furcation region, fibroblasts (arrows) and bundles of collagen fibers (CF); some of them penetrate into the alveolar bone (AB) and cementum (C). D, dentin. H&E (bar, 100 lm) (Reprinted with permission from da Silva et al. [51] © 2010 International Endodontic Journal)
The systemic toxic effect of gray ProRoot Mineral trioxide aggregate (MTA) on the liver and kidney of rats was evaluated after 7 and 30 days and compared to DiaRoot BioAggregate. The materials were inserted into Teflon tubes and implanted subcutaneously. Blood samples were taken to investigate changes of kidney and liver functions. MTA induced side effects on the liver and kidney that were significantly more severe than BioAggregate (Verio Dental Co. Ltd., Vancouver, Canada) but with no permanent damage [97].
Clinical research on MTA is presented as specific case reports or randomized clinical trials. The case reports present a very low level of evidence due to lack of standardization as opposed to randomized clinical trials. From 1995 to date there have been 50 clinical trials on MTA. Most of the clinical trials were performed on treatment of primary teeth with a total of 27 reports (Table 3.1), 26 out of which MTA was used for pulpotomies and one report for MTA used as a direct pulp capping agent [186]. The clinical trials and outcome of clinical reports assessing the success rate of MTA used for the treatment of primary teeth are shown in Table 3.1. The assessment period ranged from 3 months to 84 months. Dentin bridge formation and absence of clinical and radiographic symptoms were used to assess the success rates. MTA was shown to exhibit same outcome as of other materials tested in 17 from the 26 cases reviewed. Two studies did not use a control material but assessed MTA only; thus, no comparisons could be made [110, 118]. Calcium hydroxide and MTA may be suitable materials for the treatment of the immature teeth. However, more studies evaluating the factors influencing success and failure in teeth should be conducted [46].
Table 3.1
Clinical trials evaluating the success rates of MTA used in treatment of primary teeth
CEM calcium-enriched mixture, FC formocresol, FS ferric sulfate
There have been five reports on the use of MTA for direct pulp capping [1, 67, 69, 84, 93] and two for indirect pulp capping [103, 136]; four for apexification [52, 64, 158, 163] and six for apexogenesis [14, 16, 64, 78, 125, 138]; and five studies for use as a root-end filler [47, 48, 104, 165, 191] and one for perforation repair [77]. Taking into consideration the randomized clinical trials with specific MTA use, it can be concluded that MTA was shown to be a successful root-end filling material [156] and was comparable to IRM and super EBA cement [47, 104, 165]. Furthermore, the type of tooth treated did not affect the outcome of treatment. MTA was shown to be better than Retroplast as a root-end filling material [191]. High success rates were reported, and the need to use a root-end filling material as opposed to resection and burnishing gutta-percha was highlighted [48].
Pulp capping with MTA is recommended for teeth with carious pulp exposures especially immature teeth with high potential for healing [70]. When used as a pulp capping agent, MTA exhibited comparable clinical and radiographic success rates to calcium hydroxide [103, 136], while in other clinical studies, MTA was shown to have better clinical success rates than calcium hydroxide [67, 84]. Both ProRoot MTA and MTA Angelus exhibited similar success rates [1]. No statistically significant differences were found for superficial and deep inflammatory cell response, presence of a dentin bridge, and pulp vitality between MTA and calcium hydroxide. A statistically significant difference was found for the diameter of exposure. Only a minimal association between clinical and histological findings could be established for either material [93].
For treatment of immature permanent teeth, cases treated with MTA exhibited complete root formation earlier. A good success and an effective option for apexification with the advantage of reduced treatment time, good sealing ability, and biocompatibility providing a barrier for immediate obturation were demonstrated from MTA [52]. One-visit apexification procedures are possible with MTA [163]. Although MTA was more successful, it is more expensive, and dentin bridges developed over canal orifices, complicating future root canal therapy [78]. MTA was comparable to calcium hydroxide [16, 65, 138] and calcium-enriched mixture in treatment of immature permanent molars by pulpotomy [14, 125].