Over the past 15 years, it has become generally accepted in the daily practice of dentistry to use implants to replace missing teeth. It has also become an integral component of modern restorative dentistry. This development is based on fundamental discoveries made by P.I. Brånemark’s team (Göteborg, Sweden) and A. Schroeder’s team (Bern, Switzerland). More than 20 years ago hese two groups independently showed that titanium implants can be integrated into and form a reliable attachment with the jaw bone (Brånemark et al. 1969; Schroeder et al. 1976). This phenomenon is called osseointegration. Titanium has become a generally accepted implant material because of its excellent biological and mechanical properties, which are crucial for long-term clinical success.

Labial view approx. six months after placing an endosseous implant in the area of tooth 11, which was lost due to trauma. To minimize the risk of the future implant-supported denture being recognized as such, the implant must be incorporated in a way that conserves a stable and aesthetic soft tissue contour. The affixed mesostructure serves as the support for the metal-ceramic restoration.

To optimize aesthetics, it is particularly important to consider the symmetry and similarity of crown shape, crown volume, and gingival margin when the implant and the natural “control” tooth (21) are compared. The ceramic materials and the techniques that are available today make it possible to reproduce the appearance of natural hard tooth tissues.

Nowadays, titanium implants with an axial symmetrical design are mostly on offer. A great variety of screw-shaped implants predominate. Extension implants, like blade implants or subperiostal framework implants, have lost in importance because they can cause considerable bone defects in the jaw in case of failure. A recently conducted long-term, multicenter clinical study with more than 2300 ITI implants (Buser et al. 1997) showed that after eight years the cumulative survival rate was 96.7%, while the respective success rate was 93.2%.

For an osseointegrated implant to succeed in a healthy patient, the implant bed needs to be carefully prepared and the implant inserted and stabilized, whereupon a healing phase, without pressure, of at least three months is required. If these prerequisites are fulfilled, osseointegration with tissue coverage (two-phase surgery) or with open transmucosal (one-phase surgery) healing can be achieved. Various experimental and clinical studies show the equivalence of the two methods (Gotfredsen et al. 1991; Ericsson et al. 1995; Weber et al. 1996).

Today one does not consider that placing endosseous implants in partially edentulous patients is a special, independent therapeutic modality, but rather as one of many options to be considered within an extensive restorative treatment plan. The following questions are of importance, primarily from a prosthetic point of view:

— Can the implant substantially decrease the invasiveness (abutment preparation) of a conventional prosthetic procedure, i.e., can intact tooth tissue be saved through such a treatment?

— Can implants significantly reduce the risk associated with an extreme, conventional crown-and-bridge reconstruction (unfavorable qualities and distribution of abutments, wide gaps, etc), or is it likely that later reintervention will be locally restricted and/or simplified because of the implant-related segmentation of the restoration? 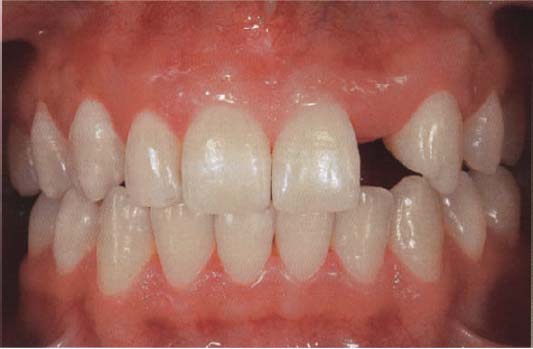 The single tooth gap surrounded by otherwise intact teeth represents a frequent indication for implants in young patients on the basis of the minimal invasive approach that is associated with implant treatment. Beside the analysis of the local bone volume, the preoperative treatment includes diagnosing and evaluating the surrounding soft tissue structures, the dimension of the edentulous jaw section, and most importantly the localization and the course of the neighboring roots.

Left: Implants with integrated angle adjustment make it possible to compensate for a divergence between the axes of the implant and the prosthetic reconstruction.

Right: An implant that is located too far lingually can result in a suprastructure overlapping the ridge.

Implants should be considered only after the completion of the initial treatment phase and after the elimination of all existing pathological processes. Restoring the chewing function was the main goal of treatment during the 1980s. During the 1990s, the treatment goal changed decisively, in that the aesthetics today also plays a relatively important role alongside the chewing function. This has led to a clear increase in overall demands made on the dentist. The goal of the treatment plan is to secure long-term success for the patient with specific consideration of chewing function and aesthetic needs. At the same time, this goal should be achieved within the shortest possible time and at a reasonable cost.

The dentist must be aware of the differences between implant indication in the posterior, nonaesthetic regions and the anterior, aesthetic regions, because they are characterized by quite specific demands based on the location.

More recently, dental restorations have been increasingly influenced by aesthetic considerations. Two main reasons were and still are responsible for this development: the wish of the patients to have as natural an aesthetics as possible and the continuing search within dentistry for less invasive restorative treatment procedures (Magne et al. 1993a, 1993b, 1994). Missing front teeth can either be replaced through conventional, fixed bridges or through bonded bridges with excellent aesthetic and functional long-term results. They represent the gold standard for each innovative therapeutic alternative. Implant-supported restorations are an alternative to such treatments. Implants performed without optimal preoperative planning and treatment can result in faulty implant positioning and/or insufficient management of the surrounding soft tissues which will result in an aesthetic failure (Garber and Belser 1995). Consequently, diagnosis and treatment planning have an important role in the preoperative treatment. As already stated, in most cases one can achieve good functional and aesthetic results by treating upper maxillary front teeth with conventional, fixed dentures.

Left: The axial profile should be continuously widened in a coronal direction from the submucosally located implant shoulder to the mucosa opening, so that the visible area of the suprastructure of the implant corresponds to the clinical crown of the neighboring tooth.

A series of objective aesthetic parameters, here summarized as a schematically depicted twelve-point checklist for clinical application (Belser 1980), particularly emphasize the importance of certain symmetries in the maxillary anterior area. It is of the greatest importance to produce a harmoniously arcade-shaped course of the gingiva with clearly marked interdental papillae and without abrupt differences in level between neighboring teeth.

Patients’ expectations are always high and room for compromises with implant-supported dentures is, therefore, particularly in the presence of a high smile-line, correspondingly small.

Consequently, an optimal aesthetic implant treatment depends not only on the prosthetic and technical procedures, but also to a great extent on the following anatomical and surgical parameters:

— Submucosal localization of the implant shoulder.

— Proper three-dimensional implant position that is determined by the planned prosthetic suprastructure and not by the local anatomical realities. This is called “restoration-driven implant placement” (Garber and Belser 1995).

— Symmetry of the clinical crown volume when the implant is compared with the contralateral natural control tooth.

Labial view of a 25-year-old patient, three months after receiving a transmucosally placed implant in the region of the lost tooth 11. The neighboring interdental papillae have collapsed towards the center of the tooth gap.

The short titanium healing cap which has been in place during the three-month healing period is replaced with a longer healing cap as the first step in the prosthetic reconstruction. This will induce the formation of the funnel-shaped soft tissue collar around the implant.

The labial view of the cast clearly shows the discrepancy between the diameter of the present peri-implant soft tissue and that of the neighboring dental neck region of the natural incisor serving as a reference.

Right: The corresponding lingual view shows the spatial relationship between vestibular mucosa margin and the prosthetic connection to the implant, which was located much more apically at the time when the picture was taken.

During surgery, the implant should be placed into a favorable three-dimensional position. The implant thus becomes the apical extension of the future implant crown. Regarding the vertical position of the implant shoulder, the implant is placed approximately 2 mm deeper into the bone as compared to other locations. That means that with an ITI implant, the smooth neck part of the implant will lie in the enossal region. To limit bone resorption, special implants should be used, on which the TPS coating is extended about 1 mm further coronally.

The buccal position of the implant shoulder should be the same as the buccal contours of the adjacent teeth, so that an implant crown can be produced with a favorable cervical contour. This position is often limited due to vestibular bone flattening and one must ensure that during the implant placement the buccal bone lamella is sufficiently thick (> 1 mm). This bone wall is important for supporting the facial soft tissues and to maintain long-term stability. Therefore, there is no room for compromises.

The goal of the wax reconstruction is to visualize the future implant suprastructure. This step is taken without taking the position of the underlying implant into consideration.

Left: After completed wax reconstruction of the clinical crown, the cervical margin, which corresponds to the future mucosal penetration site of the planned prosthetic suprastructure, is marked using a red pencil.

After the wax pattern has been removed from the master cast, the red line, representing the mucosal penetration site for the future implant suprastructure, is clearly visible.

Left: After removing the waxed crown, the dental technician uses a suitable bur to create the space that is needed to allow an optimal cervical axial contour of the suprastructure.

The picture was taken after attaching the temporary resin crown. It shows a mild, pressure-induced anemia of the soft tissue surrounding the crown. The cervical contour of the temporary crown should together with an adequate massage technique lead to a harmonious course of the gingival margin.

Left: After excessive soft tissue has been removed, a temporary crown is made on a prefabricated titanium cap.

Important points in the surgical technique include:

— if necessary, use a connective-tissue transplant gained from the palate/>