1 When a treatment plan for a patient is being developed, what should be the goal?

The goal that should be inherent in any and all treatment plans should be to make the decisions that will allow the orthodontist to:

For most patients, the objectives are esthetics, health and function, and stability. If a growing child is being treated, an additional objective should be to use forces that are in harmony with growth and development.2,3

2 Is there “room for error” during the treatment planning process?

3 Should patient/parent desires be considered when a treatment plan is developed?

Absolutely, but only if the patient/parent desires are1,7–9:

DESIRES THAT ARE CONSISTENT WITH THE SCIENTIFIC BODY OF EVIDENCE

A patient who presents with minor mandibular crowding and a reasonably steep mandibular plane angle wants a “movie star” smile and a great occlusion—BUT NO EXTRACTIONS! Fig. 9-1, A-C shows the facial photographs of such a patient. Fig. 9-1, D and E illustrates the pretreatment casts. Note the crowding; it is not severe. Figure 9-1, F and G shows the cephalogram—its tracing and the cephalometric values. The patient was treated—according to the patient’s wishes and the general dentist’s wishes—with no extractions. Fig. 9-1, H-M exhibits a comparison of the pretreatment/“progress” photographs. Is the face better or worse? Fig. 9-1, N and O, the pretreatment/“progress” cephalograms and their tracings (Fig. 9-1, P and Q) confirm the fact that the teeth were not “retracted” as the patient/parent desired. The facial esthetics was significantly compromised as is evidenced in Figures 9-1, H-M. What happened? The answer is quite simple. Parent desires were not consistent with the scientific evidence in orthodontics—evidence that speaks to expansion orthodontic treatment and facial esthetics. The fact that mandibular incisors must be uprighted in certain skeletal patterns in order to improve facial esthetics was forgotten during formulation of the treatment plan. Simply stated, the patient’s treatment plan and her desires were not consistent with the body of knowledge in orthodontics. It is the clinician’s duty to explain all of these things to a family when the treatment plan is presented. Not to do so can be disastrous. The patient/parent must be made to understand that desires, at times, cannot be achieved unless preferences or wishes—in this case, no extractions—are modified. 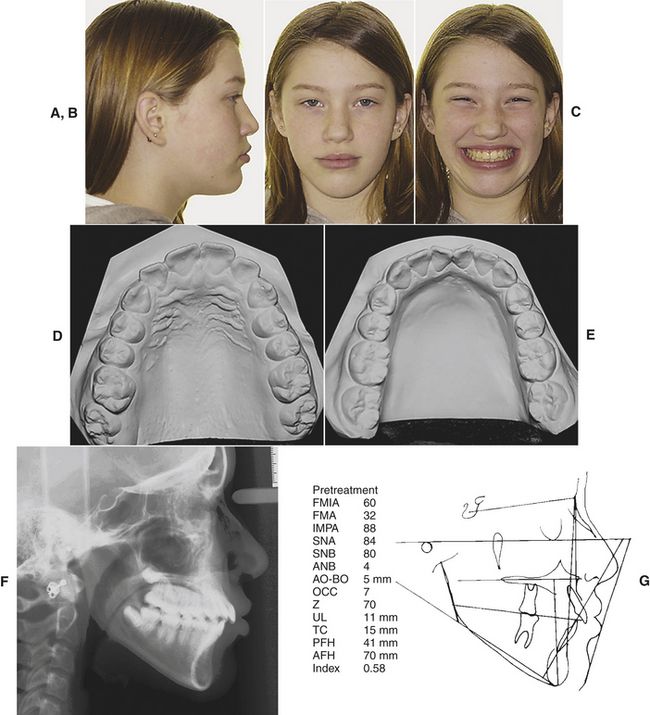 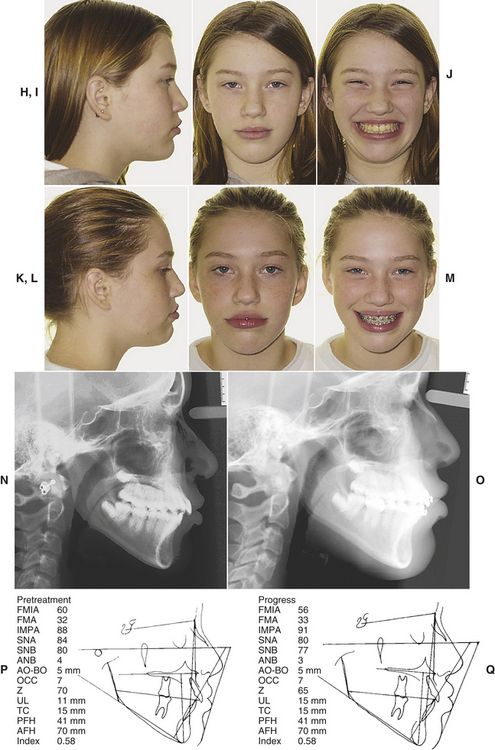 RESULTS THAT CAN REASONABLY BE DELIVERED

The patient and the parent requested “retreatment.” Four premolars were extracted. Fig. 9-2, A-D shows the pretreatment/posttreatment dentition. Fig. 9-2, E-M illustrates the pretreatment, “progress,” and posttreatment facial esthetics. The cephalometric tracings (Fig. 9-2, N-P) reflect the tooth movement. Fig. 9-2, Q-S confirms that the patient has a very nice and pleasing smile at the cessation of treatment. These results were “reasonable.”10–12 The altered treatment plan and the patient’s altered expectations became harmonious with the scientific evidence. This patient wanted “straight” teeth and a nice smile that a flawed treatment plan could not deliver, so a scientifically sound plan was initiated. 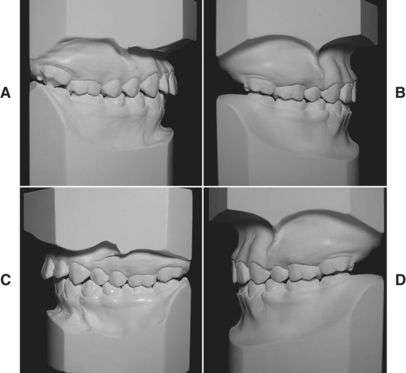 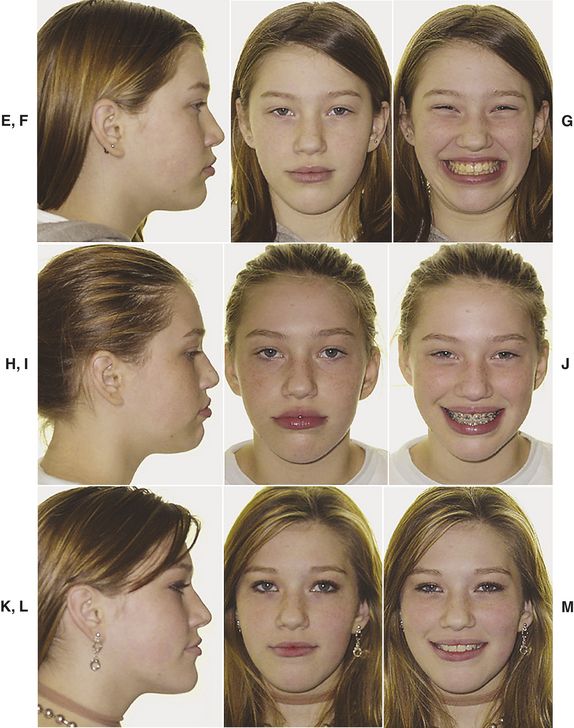 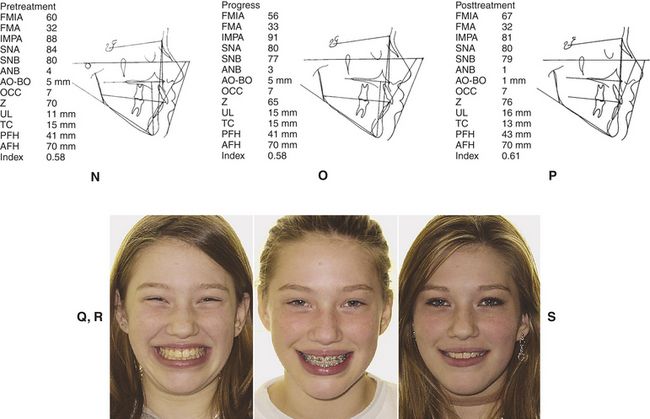 4 Is there an underlying concept that should be considered when a treatment plan is developed? If so, how can the concept be simply and succinctly explained?

A fundamental treatment planning concept that should be considered when every treatment plan is developed is that there is a finite dimension of the dentition.13 This concept has been expressed in various ways. Merrifield14 expressed it best when he stated that the dimension of the dentition concept has four premises provided the musculature is normal.

PREMISE #1—ANTERIOR LIMIT OF THE DENTITION 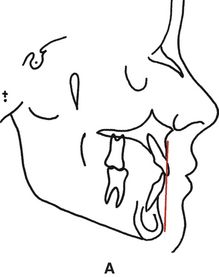 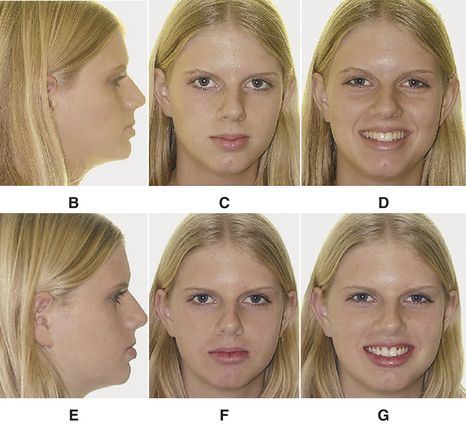 PREMISE #2—POSTERIOR LIMIT OF THE DENTITION

A posterior limit of the dentition exists (Fig. 9-4, A). Teeth can be positioned and/or impacted into the area behind the mandibular first molar in the mandibular arch even as they can be moved too far forward off basal bone. Easier than posterior movement of mandibular teeth is posterior movement of maxillary teeth. Maxillary posterior expansion is easy to accomplish but equally disastrous. In many instances posterior expansion leads to impaction of the second molars and, more often than not, vertical expansion because posterior teeth, when pushed distally into a smaller part of a “wedge,” unfavorably impact the posterior vertical dimension.13 The pretreatment/6-month cephalograms of a patient (Fig. 9-4, B and C) exhibit the most common problem: hopeless impaction of the second molars. The patient was subsequently treated with premolar extraction. The pretreatment/posttreatment cephalograms (Fig. 9-4, D and E) and the pretreatment/posttreatment facial photographs (Fig. 9-4, F-I) illustrate the resolution of a posterior discrepancy problem along with maintenance of facial balance and harmony. 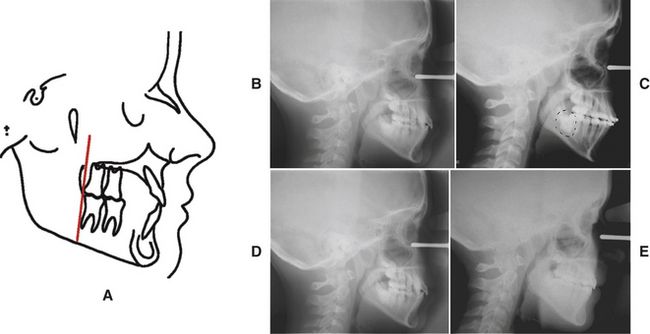 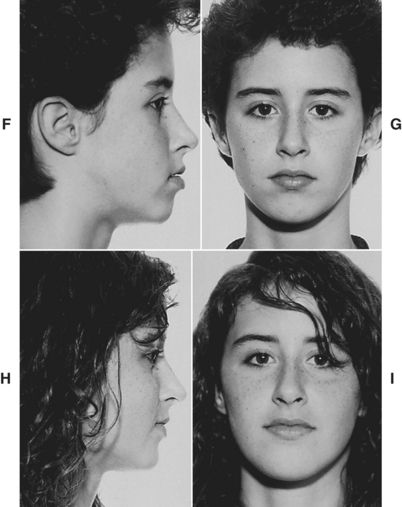 PREMISE #3—LATERAL LIMIT OF THE DENTITION 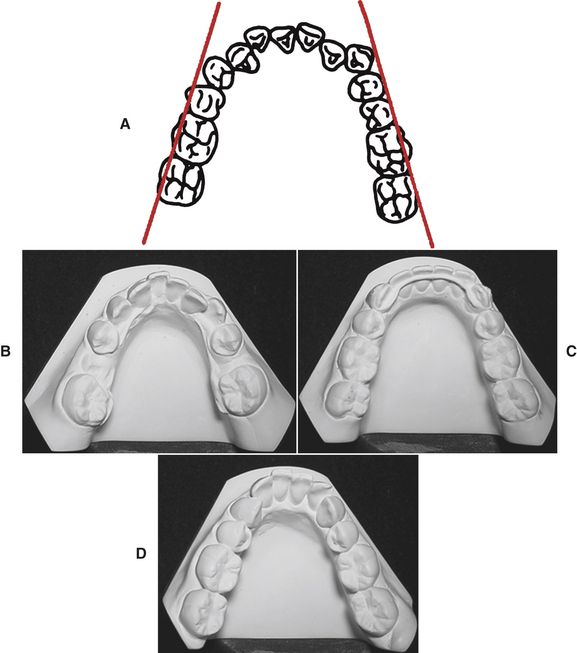 PREMISE #4—VERTICAL LIMIT OF THE DENTITION

A vertical limit of the dentition exists (Fig. 9-6, A). Vertical expansion is harmful to facial balance and harmony in the sagittal plane except in deep bite situations.17 To allow the maxillary and mandibular molars to extrude during treatment—in the moderate to high mandibular plane angle skeletal pattern—can lead to a “stretched” unaesthetic face. The pretreatment/posttreatment superimpositions of a patient (Fig. 9-6, B) and the patient’s pretreatment/posttreatment facial photographs (Fig. 9-6, C-F) illustrate the point. 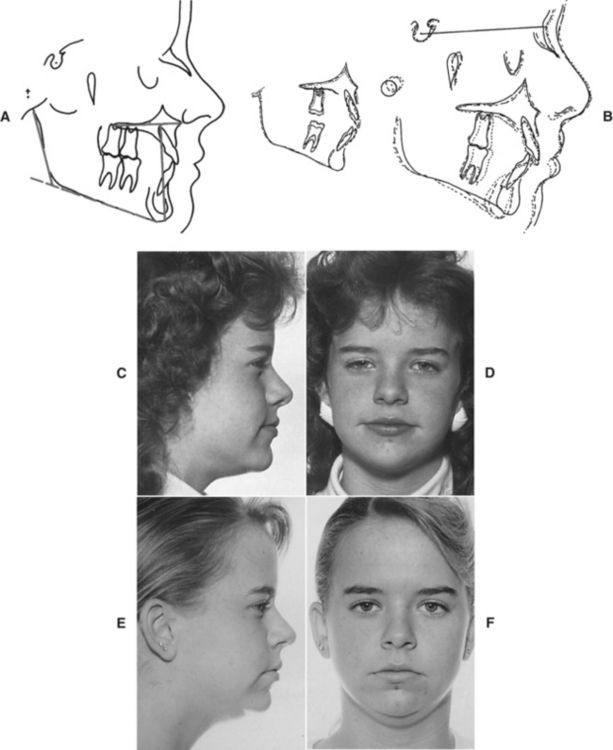 In summary, orthodontists must recognize the limitations of the dental environment and plan treatment to conform to these dimensions when normal muscle balance exists.

5 Is there a way to “simplify” the treatment planning process by analyzing the malocclusion in “components”?

One way to analyze the malocclusion in a systematic manner is to examine a patient’s problem by studying:

• The face
• The skeletal pattern
• The teeth

By looking at each of these three separate yet related entities, the clinician can compile information that will be invaluable to the formation of a treatment plan.14,18

6 What should be considered when a face is evaluated?

This answer requires books! The orthodontic literature abounds with articles about “the face.” Many authors and investigators have studied the face. For the purposes of this treatment planning chapter, the answer will be as succinct as possible. To answer this question requires more questions, the answers to which should guide the practitioner to a consideration of what role the face plays in the formulation of a treatment plan. The following questions, and the answers to these questions, should guide the clinician to make reasonable treatment planning decisions that will maintain a “good” face and, when possible, improve a “poor” face.19–21

7 What are the prerequisites for a “good face”?

Prerequisites for a good face are22–26:

• The soft tissue chin is nicely positioned in the facial profile. A patient who has a weak chin (i.e., a retrognathic mandible) cannot have a face with significant chin projection unless surgery is used. Conversely, a patient who has a Class II malocclusion but who has a fairly “strong” chin can have a more balanced face after orthodontic treatment (Fig. 9-7).
• No serious skeletal convexity problem exists. This problem is directly related to the “nicely positioned chin” which has been explained.27–31A serious skeletal convexity will generally predispose a patient to a recessive chin after orthodontic treatment. A patient who has a significant malocclusion but who has no serious skeletal convexity should have a very orthognathic profile after proper treatment (Fig. 9-8).
• Adequate lip fullness—the lower lip should lie on the profile line. A lower lip that is severely retruded or very “weak” lips will predispose a patient to poor facial esthetics. There is nothing an orthodontist can do about this problem because the patient has inherently poor lip structure.32 On the other hand, a patient with more lip fullness will always have a more pleasing face if treated properly (Fig. 9-9).
• There should be a definite curl to the upper lip, which measures 3 to 5 mm in depth. Lower lip form and curl must be in harmony with upper lip form and curl (Fig. 9-10).33 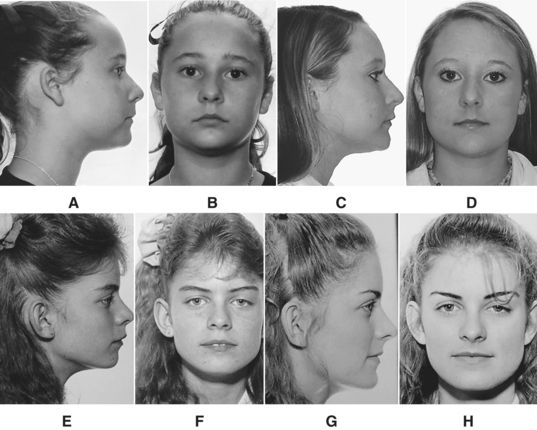 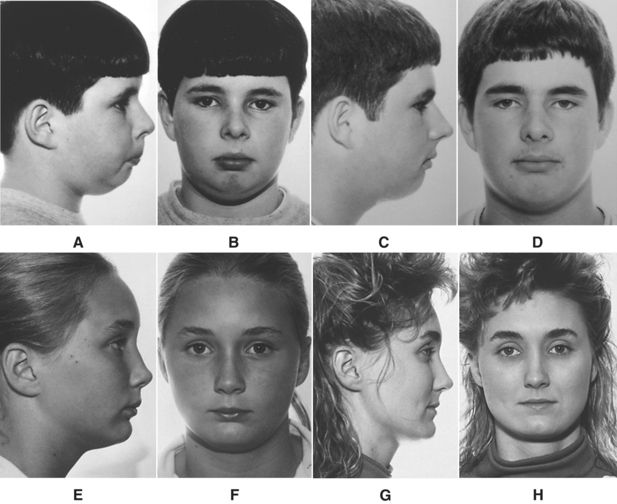 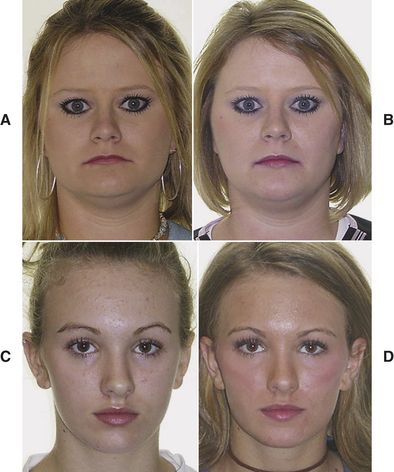 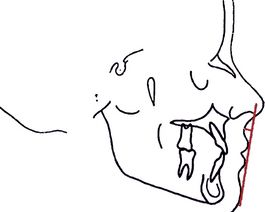 8 What measurements allow the clinician to quantify or measure, a “good” face? 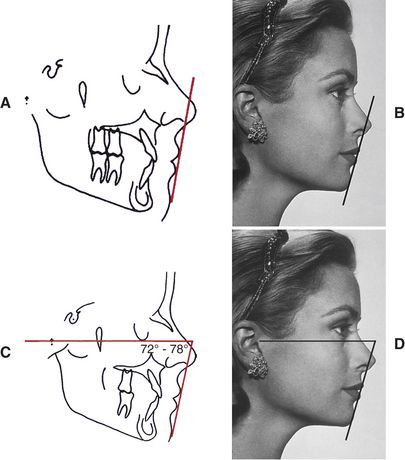 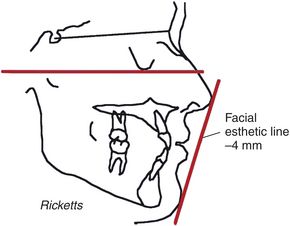 There are essentially three factors that influence facial balance or the lack thereof 14,40–43:

1. The position of the teeth
2. The skeletal pattern
3. The soft tissue overlay

10 How do teeth affect facial balance?