As one of the oldest specialties in dentistry, orthodontics has seen several periods of radical transformation. New theories, new devices, and new ways of treatment have often dramatically changed the way orthodontists move teeth or jaws. From bracket development such as edgewise slots, bondable adhesives, ceramics, and self-ligating brackets to NiTi wires, coils, and rapid palatal expanders, all the way through LeFort osteotomies and distraction osteogenesis, the world of orthodontics is radically different from what the founding fathers might remember.

Orthodontics is once again poised for greater and more efficient treatment, less reliance on patient cooperation, and possibly even less need for surgical interventions. Temporary implantation of material to gain a mechanical advantage during orthodontic treatment will undoubtedly be one of the great transformers of orthodontics in the early portion of the 21st century. Knowledge of the history of implants as well as various implant types available to practitioners is critical in being able to provide patients with the best and most up-to-date technical materials available for orthodontic treatment with temporary implant anchors (TIAs).

1 What is the history of implants in dentistry?

The history of implantable material in the oral cavity goes back several millennia. There are reports of items such as seashells, precious stones, ivory, and bone being used as implants.< ?xml:namespace prefix = "mbp" />1,2 In the Middle Ages, wealthy persons might attempt to implant a less-fortunate person’s tooth for a fee. Recent implantable materials include Vitallium, ceramics, Zirconia, stainless steel, titanium alloys, and pure titanium, among many other compounds.

In the mid 1960s, P.I. Brånemark made famous the body’s ability to accept and bond to titanium, a process coined osseointegration.3 Andre Schroeder was another pioneer in the development of surface and design modifications in the development of predictable dental implants.4 These changes shortened the healing time from 6 months to several weeks and effectively allowed for the realistic use of implants in orthodontics.5–7 Currently the most predictable and acceptable implant material is commercially pure titanium with some type of subtractive surface treatment (Fig. 18-1).8–10

FIG 18-1 A, SEM implant surface (15X). B, SEM of roughened surface implant (150X). C, SEM of macro and micro roughness of SLA surfaced implant (3000X). This provides the architecture for the bone to be directly laid down on the implant surface.

2 What is the history of implants in orthodontics?

Attempts to use implants in orthodontic treatment can be traced back to the early 1900s11 with some reports coming from the late 1800s. Certainly, several of the attempts in the early 1900s can be seen as a valiant yet unsuccessful efforts at implantable anchorage.12 However, with the advent and success of the titanium implant, the speed of research in both animal and human models accelerated. The 1980s saw a rise in the use of endosseous implants in orthodontics by clinicians such as Gray, Turley, Shapiro, Roberts, and others.13–17

The first mention of implant osseous anchorage in the palate was by Triaca18 in 1992. The Straumann and Brånemark companies developed the only two available palatal implants in the United States. Intermaxillary fixation screws began to be used during the late 1980s and into the early 1990s. Widespread development and use outside the United States has led to the development and acceptance of TIAs on a global scale. These TIAs are now marketed by both traditional implant companies as well as orthodontic supply companies.

3 Why would one consider implants for orthodontic treatment?

Implants are useful in orthodontic treatment for the very fact that orthodontists rely exclusively on anchorage to move teeth.19 Force values are applied to a tooth in order to move that tooth through the alveolar process.20 In order for forces to be effective they must be applied and countered.21 This promotes a response in the periodontal ligament that allows for bone remodeling to occur on the pressure side and deposition of bone to occur on the tension side of the tooth.

Force transfer is less than complete when the anchor teeth experience movement themselves.22–25 With implants, this loss of force transfer can often be avoided due to the stationary nature of the implant, and not the mobile nature of the tooth, as the anchor. In addition, when the mechanics rely heavily on the cooperation of the patient and the patient is less than enthusiastic about complying, treatment progress can be hindered.26 Osseointegrated implants provide a stable, secure, and absolute anchorage.

BENEFITS OF IMPLANTS IN ORTHODONTICS

4 What are some of the advantages of using implants for orthodontic treatment?

• The ability to treat patients that might not otherwise have been treated.
• The ability to avoid some unpopular and complex mechanical devices such as headgear.
• The ability to move teeth with less round tripping, less incidental tooth movement, and fewer unintended consequences.
• The ability to shorten treatment time by allowing the force application to be more accurately directed toward the teeth that need to be moved.
• The ability to use lower force levels because force values are not lost on movement of anchorage units and force vectors can be more ideally in line with centers of rotation.
• The ability to correct malocclusions in patients who have negative treatment responses or unexpected rates and directions of growth.
• The opportunity to treat borderline or even mild surgical candidates without the associated cost, trauma and time involved with orthognathic surgical intervention.

5 What are some of the disadvantages of using implants for orthodontic treatment?

A disadvantage of using implants can be the cost, the procedure involved, and possible complications encountered. With all types of implants, cost should be addressed. When a surgeon’s office is placing an implant, there is usually a fee for placement as well as for removal. This fee will vary depending on the cost of the materials as well as the variation in location. Even if an implant is to be placed by the orthodontist, a fee may still be considered necessary for financial as well as for procedural purposes.

The procedure, although often espoused to be “minor,” should still be thought of as a surgical procedure. Nonsurgical correction of patients traditionally considered surgical patients is promising but has not been verified with adequate long-term results; thus, the ability to maintain the end treatment result is not completely confirmed. Finally, the complications that may arise from placing an implant into a tooth or with the movement of a tooth into an implant would be less than desirable. Complications with every device an orthodontist uses should always be considered a disadvantage.

6 What are some of the considerations in regard to specific treatment mechanics?

When any orthodontic implant is used, force vectors need to be appropriately applied and delivered.27–29 Depending on the type of implant placed, the mechanics applied to the implant and the positioning of the implant may vary. For example, when attempting to retract anterior teeth, consideration should be given to the existing vertical and horizontal position of the teeth to be moved. If the maxillary anterior teeth exhibit an excessive vertical overlap (deep bite), retraction and intrusion from a mini-implant placed higher in the buccal vestibule would be appropriate, as would attachment of the retraction force close to the bracket of the teeth to be retracted. This would provide not only a posterior force vector, but also a vertical force vector. The creation of a counter-clockwise rotational force around the center of rotation of the anterior segment would intrude the maxillary anterior segment as it is retracted.30

If the maxillary anterior teeth exhibit a shallow or negative vertical overlap (open bite tendency), retraction from a mini-implant placed closer to the gingival margin of the teeth would be appropriate, as would the attachment of the retraction force to a hook extending a distance off the wire. This would place the retraction force higher into the vestibule and thus retract in a more horizontal vector to help correct the open bite. With palatal implants, the teeth themselves can either be moved with the use of activation from the implant or locked down as anchors to move adjacent teeth with traditional mechanics.31

7 How can implants benefit orthodontics beyond traditional mechanics?

Implants may release some of the constraints that Newton’s Third Law holds on the orthodontist when working with tooth-borne anchorage. Of course, Newton’s Third Law still applies, but the resultant force on the implant releases the other teeth from force application and hence movement. Newton’s First Law gains greater importance in that teeth that are not “in motion” will likely stay put. Depending on the implant system and mechanics, a greater expression of the force applied results in more accurate torque control and movement of the teeth to be moved.

Implants also allow the orthodontist to treat patients who may have an inadequate number of teeth to act as anchors (Figs. 18-2 to 18-4). At times these patients are the ones most desperately in need of orthodontic treatment in order to save existing teeth and prepare the mouth appropriately for restorative modalities.32 Implants give the practitioner the option to treat patients that might not be physically capable or compliant when using patient-dependent auxiliary devices. The treatment of patients with compromised maxillary and mandibular dentition can be more easily handled with proper planning for implant and the possible use of implants during treatment. Implants make traditional treatments easier and open treatment options for these underserved populations of our dental community. 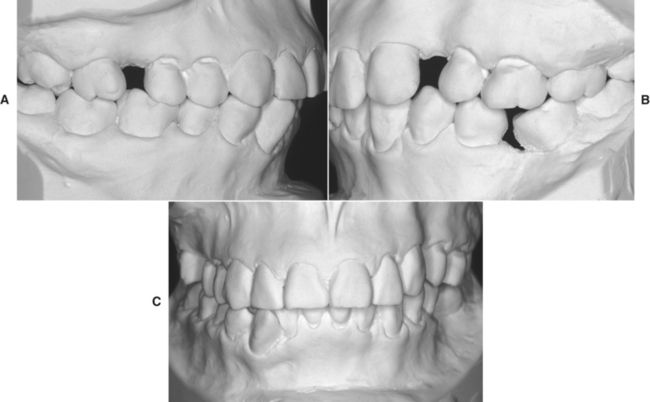 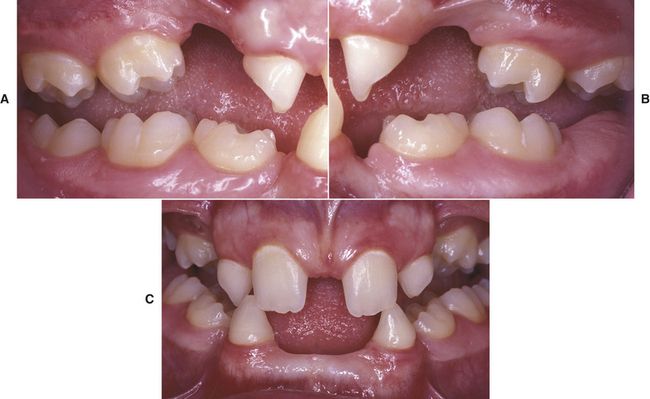 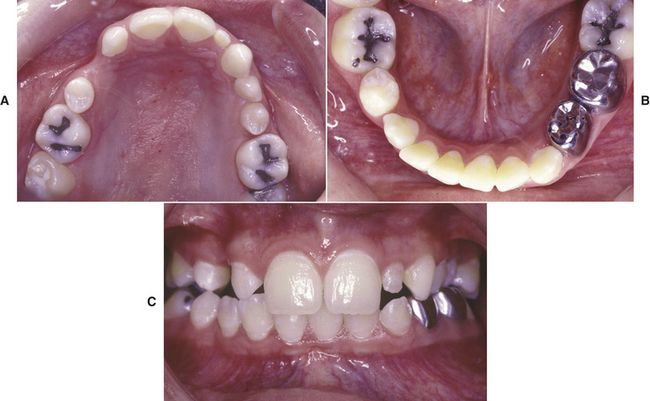 8 Should we consider implants in more orthodontic treatments?

Whether or not an individual practitioner decides to consider implants as an option in treatment plans that are “more routine” is entirely up to the practitioner’s desire. If implants can aid treatment, decrease morbidity of teeth, and increase the effectiveness of the bracket system, then most certainly they should be considered for use in any complex treatments that are not being featured on an “extreme makeover” edition.

One might argue that using implants is too invasive to consider using for routine application because of the surgical procedure. Many practitioners could counter that the use of a transpalatal arch (TPA) and headgear is much more invasive, certainly more taxing on the patient, and obviously affecting the patient in a far greater way than the placement of some form of temporary implant. Where the line is drawn should not be relative to the perceived “invasiveness” or a claimed “extraneous” application of dental materials.