10: Treatment Tactics for Problems Related to Dentofacial Discrepancies in Three Planes of Space

All orthodontic appliances produce both desired and undesired tooth movements. The science and art of orthodontics is to balance forces in order to maximize the desired movement and minimize the undesired movement. This balance is achieved through proper decision making in three areas: (1) appliance selection, (2) appliance utilization, and (3) timing of appliance therapy.

Although proper appliance selection and utilization are two critical issues in effective orthodontic treatment, successful treatment outcomes may not be achieved without appropriate timing of appliance therapy. Using an orthodontic appliance at an inappropriate time may lead to ineffective treatment and result in undesired tooth movements. For example, the use of a rapid palatal expander (RPE) in a skeletally mature patient may cause excessive tipping of posterior teeth, lingual cusp interferences, anterior open bite, adverse periodontal consequences, and high potential for orthodontic relapse after treatment. Timing of appliance therapy also relates to the sequence of treatment events. Attempting space closure and anterior tooth retraction without proper anchorage preparation may lead to undesired tooth movements that cannot be reversed. Consequently, selection, utilization, and timing of appliance therapy are intertwined and involve a comprehension of tooth movement in the transverse, vertical, and anterior-posterior dimensions.

1 Under what circumstances should a maxillary expansion appliance be used?

• Correction of dental and/or skeletal posterior crossbites that are either unilateral or bilateral.< ?xml:namespace prefix = "mbp" />1–3
• Correction of anterior crossbites associated with a functional shift or traumatic occlusion. Early expansion sometimes used in conjunction with a protraction facemask or upper fixed appliances on the lateral and central incisors can result in anterior movement of the dental alveolar complex through both dental and skeletal movement.2
• Elimination of crowding through an increase in arch length.
• Correction of axial inclinations of posterior teeth.
• Mobilization of circummaxillary sutures to make skeletal protraction possible during facemask treatment.

2. What are the different types of expansion appliances?

The Hyrax expander consists of two bands on the upper first molars and usually two bands on the upper first bicuspids (Fig. 10-1, A). The Hyrax expansion screw located near the midpalate is soldered to the lingual surface of the bands. The expansion screw is usually activated one turn (approximately 0.25 mm) each day. If substantial expansion is required, the expander design should incorporate as many teeth as possible to minimize buccal crown torque (tipping rather than translation) and “hanging” lingual cusps. Excessive buccal crown torque should be avoided, since it can result in adverse periodontal sequelae, relapse of the maxillary constriction, and lingual interferences. 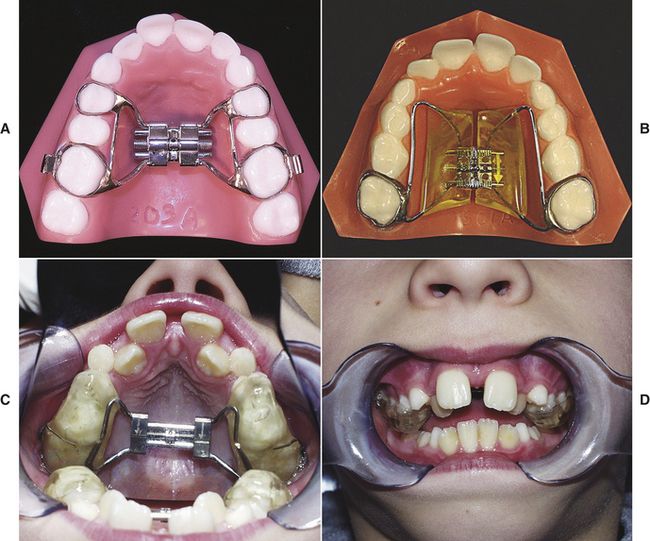 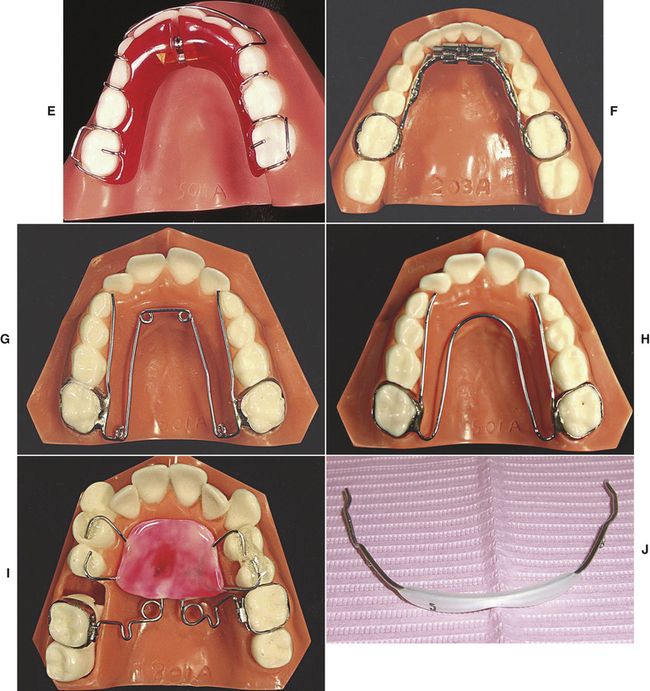 The Haas expander is a fixed maxillary expander that uses acrylic pads and heavy lingual wires to apply pressure to both the teeth and the palatal tissue during expansion. This expander is thought to result in less tipping of the buccal tooth segments (Fig. 10-1, B). The lingual wires are soldered to bands on the first bicuspids and the first molars and extend onto the palate where they are embedded in the acrylic pads. The Haas expander as well as the Hyrax expander moves the palate transversely and increases arch perimeter 0.7 mm for each millimeter of transverse expansion. Most feel that an RPE will move the maxilla inferiorly and anteriorly as well as transversely.

Bonded RPE is an alternative to the banded design. It is a fixed appliance that uses posterior acrylic coverage and is directly bonded to the teeth (Fig. 10-1, C and D). The posterior bite blocks remove cuspal interferences. Headgear tubes, arch wire tubes, and reverse pull hooks for a protraction face mask can all be added as desired. This appliance is typically used when a more rigid appliance is desired to minimize tipping of the buccal segments. It is preferred in mixed dentition patients who do not yet have their upper first bicuspids, but primary molars are present. In addition, it may be used for its bite block effect in patients with an open bite tendency.

Lower Schwarz appliance (Fig. 10-1, E) is used for minimal arch expansion in the mandible.4 This appliance is only activated once a week, unlike the RPEs described previously.

Fixed mandibular expander is used as an alternative to the removable Schwarz appliance. This fixed metal expander provides lateral expansion in the mandibular arch (Fig. 10-1, F). The lower fixed expander can be a good option when patient cooperation is an issue.

This fixed metal expander is capable of applying forces in numerous directions depending upon how it is activated by the orthodontist (Fig. 10-1, G). The four helical loops (two in the first bicuspid region and two in the first molar region) can be activated in unison or individually to achieve the desired results. The appliance is soldered to bands on the first molars, and lingual arms run from the bands forward to the cuspids or first bicuspids as desired. In general, quadhelix is used if dental expansion is primarily desired.

W arch is similar to the quadhelix without the four helical loops (Fig. 10-1, H). This appliance will lead to more dental expansion as opposed to skeletal expansion than a Hyrax or Haas maxillary expander.

Pendex is a fixed expansion appliance that is also used to distalize and derotate one or both upper first molars (Fig. 10-1, I). The Pendex appliance eliminates patient compliance concerns from the distalization treatment objective. A Haas expansion screw is usually incorporated into acrylic pads. This appliance can be designed with bands on the bicuspids and is frequently used in conjunction with wire rests that are bonded to the occlusal surface of bicuspids or primary molars to provide additional anchorage.

A lip bumper (Fig. 10-1, J) is a large-diameter round wire that extends from first molar to first molar and rests in the buccal sulcus. It also has an acrylic pad in the anterior region. It can be used in either arch to distalize the first molars and promote transverse development of the arch by removing the pressure of the buccal tissues on the teeth and supporting structures.

Arch wires can be expanded transversely to achieve dental expansion in either the maxilla or mandible.

3 Which expansion appliance should I use?

Factors that influence the selection of an expansion appliance include, but are not limited to, patient’s age or skeletal maturity, the clinician’s desire for dental versus skeletal expansion, the number of teeth available for anchorage, the expectation for patient compliance, and whether the expander will be used in conjunction with fixed appliances or other appliances, such as a facemask.5 In general, the more skeletally mature the patient, the number of teeth required for adequate anchorage to minimize dental movement increases. In addition, more rigid expansion appliances are generally required in more mature patients to minimize dental tipping of the buccal segments.

4 When should expansion be initiated?

Treatment of crossbite with a functional shift should be initiated as soon as it is diagnosed. If not treated, these crossbites may adversely affect growth. If the mandible shifts to one side, growth will be asymmetric and the chin will deviate to that side. Also, very narrow upper arches should be treated as early as possible. As the patient matures, it is hard to get skeletal expansion. These narrow upper arches are usually associated with significant crowding and are best corrected when the patient is skeletally immature. Expansion in skeletally mature patients may result in undesired dental movement; therefore, the best time to correct these constricted arches is usually in the mixed dentition.