1 How many patients with CMF deformities are in the United States?

In the United States, it is estimated that 17 million individuals aged 12 to 50 years (18% of this population) have malocclusions that are severe enough to warrant surgical correction.< ?xml:namespace prefix = "mbp" />1–4 In addition, congenital anomalies of the CMF skeleton affect a large number of children. The most common congenital anomalies include cleft lip and palate (over 3.6 in 1000 live births5), craniosynostosis (343–476 per 1 million live births6), and hemifacial microsomia (1 per 5600 live births5). A majority of these patients will require surgery. Additional CMF deformities also occur after tumor ablation and trauma. Treatment for head and neck tumors often result in significant deformities that require reconstruction.7,8 The incidence of head and neck cancer is 9.7 per 100,000 Americans. This translates into 28,000 new patients every year, which does not include patients with benign tumors who also may require surgery.9 It is reported that nonfatal injuries from trauma affect 28 million Americans (10% of the population) annually,10 with 37% suffering injuries involving the head and face.11 A significant number of these patients will also require surgical treatment. Finally, 5% to 15% of the population is reported to have symptoms of TMJ disorders, with peak prevalence in young adults (20–40 years of age).12,13 Although the majority of these patients do not need surgical treatment, patients with TMJ ankylosis, severe rheumatoid arthritis, or osteoarthritis may require TMJ reconstruction. It is estimated that about 3000 prosthetic joint replacements are performed each year,14 as well as a similar number of autogenous reconstructions.

2 What are the current planning methods for CMF surgery?

CMF surgery requires extensive presurgical planning because of the complex nature of 3D anatomy of the skull and face. The current methods used to plan CMF surgery vary according to the type of surgery being planned but are not much different from the methods that are used to plan simple orthognathic surgery.

In general, current surgical planning methods for complex CMF deformities involve the following steps. The first step is to gather data and quantify the deformity from many different sources, including physical examination and anthropometric measurement, medical photographs, medical imaging studies (cephalometric radiographs and analysis, computed tomography [CT], etc.), and plaster dental models when the surgery involves the jaws. The second step is to simulate the surgery, including prediction tracings, plaster dental model surgery, or CT-based physical model surgery. The last step in surgical planning is to create a way of transferring the surgical plan to the patient at the time of the surgery. This is usually done by creating surgical splints, templates, measurements of the bone movements, or visual “clues.”

3 Why are the current planning methods often not adequate for planning complex CMF surgery?

The CMF surgery is usually simulated using prediction tracings. The tracings are made from the cephalometric radiograph by outlining the bones and soft tissues onto an acetate paper.15,16 The outlines of the bones to be moved are drawn on additional sheets of acetate paper. The surgical simulation is completed by moving the bone tracings to the desired position. The prediction tracings can also be completed by computerized software.

A significant drawback of prediction tracing is that it is two-dimensional (2D).17–20 Patients’ 3D anatomic structures are compressed at the mid-sagittal plane to a 2D cephalometric radiograph. It also creates a significant overlap of right and left structures. Prediction tracings may be clinically acceptable if the patient has only anteroposterior (AP) or vertical deformity. However, with this technique, it is impossible to simulate surgery in the three dimensions, which is essential in patients with 3D problems (i.e., asymmetries).21,22 Another problem with prediction tracings is that they portray the dentition as a 2D image.21,23 For this reason, surgeries that involve the dentition should also be simulated on plaster dental models that have been mounted on an articulator.15,16,24

Three-dimensional CT scans have been successfully used to visualize and quantify the patient’s condition. However, they have not been successfully used for surgical simulation because of two major reasons. First, the CT does not render the teeth with the accuracy that is necessary for surgical simulation.21,23 Also, raw CT data are presented by a sequence of 2D cross-sectional images of the volume-of-interest, layer by layer. During the 3D reconstruction, the missing data between adjacent layers are reconstructed by mathematical algorithms (e.g., Marching Cubes25). Currently, the most precise 3D CT scanners scan at a minimum slice thickness of 0.625 mm. At this thickness, although they are adequate for bony structures, they are not capable of accurately reproducing the teeth to the degree that is necessary for surgical planning. The occlusion between maxillary and mandibular teeth requires a high degree of precision. Even a 0.5 mm error may cause malocclusion. Furthermore, it is very difficult, if not impossible, to remove artifacts, which is the scattering caused by orthodontic brackets or dental metallic restorations. Because of these limitations, surgeries that involve the teeth are still simulated on plaster dental models.15,16,24

With the fast development of cone-beam CT technology, the scanning slice thickness is reduced to 0.2 mm. It also has a better control on the artifacts. Radiation exposure to the patients has been significantly reduced. The cone-beam CT scanner has become a favorite gadget for orthodontists and dentists. However, in the treatment of complex CMF deformity, the surgeons want to see the “true” replica of CMF bones. The images from cone-beam CT have relatively lower contrast compared with regular medical CT images. This makes the segmentation process (to separate the bones from soft tissue on the CT image) rather difficult. After 3D reconstruction, it is common to observe that the anterior walls of the maxillary sinus or orbital floors are “mystically” missing on the 3D model. Although the artifacts produced by cone-beam CT are minimal, the rendition of the teeth is still inappropriate for simulating the final occlusion or for making the surgical splints.

Another means of simulating surgery is to use CT-based physical models produced by rapid prototyping techniques (e.g., stereolithography apparatus [SLA] models). Even though these models are useful, they have a number of disadvantages. One disadvantage is that in cases involving the occlusion, the teeth are not accurate enough for precise surgical simulation. This is because the CT image data, from which the models are built, are unable to accurately render the teeth and are also subject to artifacts. An additional plaster dental model surgery is still necessary to establish a new dental occlusion and to fabricate surgical splints. Another disadvantage is that it is impossible to simulate different surgeries on a single model. Once the model is cut, it is impossible to undo the cut.

Surgeries that involve the teeth are also simulated on plaster dental models.15,16,24 The purpose of this step is to establish a new dental occlusion and to fabricate surgical splints. The splint helps the surgeon establish the desired relationship between maxilla and mandible. A drawback of plaster dental models is that they do not depict the surrounding bony structures.23,26 Therefore, it is impossible for the surgeon to visualize the skeletal changes that occur during model surgery, which is critical in the treatment of complex CMF deformities. Finally, there are two major issues regarding the use of plaster dental model surgery.

The ability of the surgeon to transfer the desired surgical plan to the patient during orthognathic surgery depends mainly on the accuracy of the surgical splint. The fabrication of an accurate splint requires that the models be mounted to replicate the position of the patient’s dentition. However, Ellis et al.24 demonstrated a significant difference between the inclination of the occlusal plane on the mounted models and the actual occlusal plane as measured on the cephalograms. Another study27 shows that the average occlusal plane inclination using the SAM Anatomical Face-Bow was 7.8 ± 4.2 degrees, statistically significant greater than the actual. The mean occlusal plane inclination of the models obtained using the Erickson Surgical Face-Bow was 4.4 ± 2.2 degrees statistically significant greater than the actual.

The advantage of using models that are accurately oriented to Frankfort horizontal becomes evident once the implications of using inaccurately mounted models are understood. Fig. 25-1 illustrates the results of using inaccurate models to fabricate an intermediate splint. Fig. 25-1, A, depicts the cephalometric tracing of a hypothetical patient with mandibular prognathism and maxillary hypoplasia. The surgical plan for this patient calls for a 10 mm maxillary advancement and a 4 mm mandibular setback. In this case, the axis-orbital plane (face-bow) is 12 degrees off the Frankfort horizontal. Fig. 25-1, A, depicts the articulator on which the models have been mounted using the conventional system. The occlusal plane inclination of the mounted models (Fig. 25-1, B) is 12 degrees greater than that on the cephalometric tracing (see Fig. 25-1, A). In Fig. 25-1, C, the maxillary model has been advanced 10 mm forward, and the intermediate splint has been fabricated. Fig. 25-1, D, depicts the planned position for the maxilla and the actual position of the maxilla at the time of surgery. In this hypothetical case, the position of the maxilla at surgery is 1.5 mm behind the planned position, producing a maxillary advancement of only 8.5 mm, or 15% less than desired. 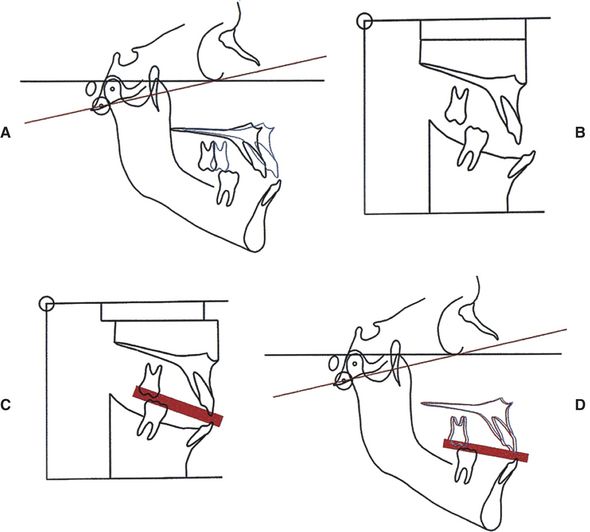 FIG 25-1 Face-bow transfer in a hypothetical patient. A, Prediction tracing in a hypothetical patient. The horizontal line in black is Frankfort horizontal. The red line is the axis-orbital plane, which is 12 degrees off Frankfort horizontal. The plan calls for a 10 mm maxillary advancement (blue line). B, The models mounted on an articulator. Note that the occlusal plane inclination of the mounted models is 12 degrees steeper than the actual occlusal plane. C, Model surgery. The maxillary model has been advanced 10 mm, and the intermediate splint (red) has been fabricated. D, The maxillary position at surgery. The blue outline represents the desired position for the maxilla. The red outline represents the actual position at surgery. Note that the actual position is 1.5 mm behind the desired position.

Predictable outcomes in double-jaw surgery depend on precisely positioning the maxilla. This is important, not only because an ideal maxillary position is necessary to achieve good mid-facial aesthetics, but also because the ultimate position for the mandible depends on it.

The first step in double-jaw surgery is to place an external reference marker (e.g., a K-wire or a screw) in the nasal bones. The vertical distance between this marker and the edges of the maxillary incisors is recorded. This measurement will help establish the correct vertical position for the maxilla. In double-jaw surgery, the maxilla is usually cut first. In order to position the maxilla at the time of the surgery, surgeons use an intermediate surgical splint that determines the AP and transverse position of the maxilla as well as any desired rotations in space. The intermediate splint is temporarily placed between the osteotomized maxilla and the mandible, and the teeth are wired in this position. The vertical position of the maxilla is then determined by autorotating the maxillo-mandibular complex to a predetermined vertical position, using the pre-determined distance between nasal marker and incisor edges as reference. Once the maxilla is in place, the dental fixation is released and the mandible is osteotomized and positioned according to the position of the maxilla. The splint is fabricated prior to surgery using plaster dental models, which have been mounted on an articulator. Articulators are mechanical devices that simulate the movement of the mandible. They are based on the principle that during opening and closing of the mandible in its most retruded position (centric relation), the condyles rotate around a hinge axis (hinge axis theory).28–32 However, recent studies show that during mandibular opening, translation and rotation are always continuous and combined.33–35 Even for the first millimeter of mouth opening, the condyles actually follow a path (combined rotation and translation), rather than rotating around a single point.30,36,37 Because the mandible also slides forward during autorotation, the maxillo-mandibular complex will also move forward accordingly. Unfortunately, current dental articulators are unable to simulate these complex movements. Therefore, traditional surgical planning, which uses semiadjustable articulators to simulate surgery and fabricate the intermediate surgical splint, f/>