Early treatment, also known as “Phase I treatment,” represents orthodontic and/or orthopedic therapy that is rendered in the mixed dentition, typically with the expectation of a second phase of orthodontic intervention (“Phase II”) after the eruption of the permanent teeth.< ?xml:namespace prefix = "mbp" />1 The goal of early treatment is to correct existing or developing skeletal, dentoalveolar, and/or muscular imbalances, thereby improving the overall oral environment before the eruption of the permanent dentition is complete. By initiating orthodontic and orthopedic therapy at a younger age, it is anticipated that many future abnormalities in the occlusion (e.g., crowding, excessive overjet, underbite) will be resolved with a relatively straightforward second phase of full fixed appliances in most instances. Thus, the frequency of complex orthodontic treatment involving permanent tooth extraction and/or corrective jaw surgery presumably is reduced.

During the last two decades, there has been increasing interest in early treatment, both within the orthodontic community and among the lay population, with articles on this topic appearing in such prominent lay publications as the New York Times, The Wall Street Journal, and US News and World Report. Within the dental community there has been an increased attention to intercepting or modifying abnormal orofacial conditions that are recognized early. This growing interest has coincided with a general rise in the level of consciousness concerning preventive dentistry and medicine; parents often seek treatment for their children at a young age, based in part on an esthetics-driven society.

1 What are the contraindications to early treatment?

Early orthodontic treatment is not always necessary or appropriate. Certainly not all orthodontic therapy delivered under the guise of “early treatment” is good treatment, as for example in instances of young patients being treated for extended periods of time with regimens that have ill-defined goals and unpredictable outcomes. In such situations, early treatment may serve only to increase treatment duration and cost; such intervention may result in patient and parental “burnout.” Early treatment is not indicated in those instances in which early intervention does not change the environment appreciably for dentofacial development and permanent tooth eruption.

2 Which problems can be treated effectively and efficiently during the mixed dentition?

We are moving toward a better understanding as to the appropriate timing of orthodontic and orthopedic intervention depending on the clinical condition. With the increasing emphasis on “evidence-based” treatments in both medicine and dentistry, we now are gaining an appreciation concerning the nature of the effects produced by specific protocols in patients of varying maturational levels. The orthodontist has many treatment options available, all of which have specific indications. The possibilities range from simple space maintenance to a variety of active orthodontic and orthopedic therapies.

3 What is the purpose of space maintenance?

One of the most basic concepts for both general dentists and specialists to comprehend is the importance of maintaining the so-called “leeway space,” or the space that becomes available during the transition from the second deciduous molars to the second premolars. In many borderline crowding cases, the maintenance of the leeway space may mean the difference between treating a patient with or without the removal of permanent teeth.

In the maxilla, a transpalatal arch (TPA; Fig. 11-1, A) extends from one maxillary first molar along the contour of the palate to the first molar on the opposite side. This appliance is capable of producing molar rotation and changes in root torque and angulation; the TPA may remain in place until the completion of the final comprehensive phase of orthodontic therapy.1 In the mandible, a lingual arch (Fig. 11-1, B) that extends along the lingual contour of the mandibular dentition from first molar to first molar may be used. The lower lingual arch is used less frequently than the transpalatal arch because many patients undergoing early orthodontic treatment do not require the maintenance of the space in the mandibular second premolar region. Thus, the lower lingual arch is used only in patients in whom maximum anchorage is to be maintained. In contrast to the transpalatal arch, the lower lingual arch is usually removed as soon as the mandibular second premolars erupt fully into occlusion. 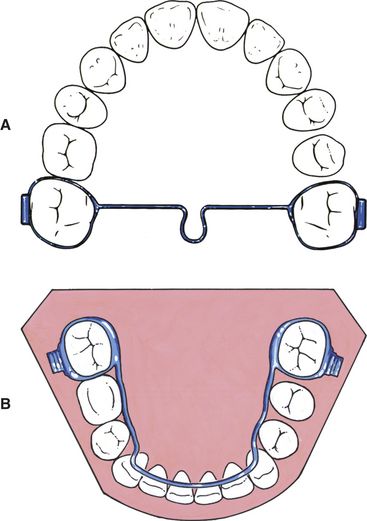 4 How do you treat patients with crowded teeth?

Patients with developing moderate to severe tooth-size/arch-size discrepancy problems are often treated effectively and efficiently when a patient is 8 or 9 years of age. Normally, this treatment is started after the permanent lower four incisors and the permanent upper central incisors have erupted. In many instances, there is insufficient space to allow for the unimpeded eruption of the maxillary lateral incisors. Depending on the size of the permanent teeth, either a serial extraction or an orthopedic expansion protocol can be used.

5 What is “serial extraction?”

Serial extraction refers to the sequential removal of deciduous teeth to facilitate the unimpeded eruption of the permanent teeth. Such a procedure often, but not always, results in the extraction of four first premolars. The typical serial extraction protocol is initiated about the time of the appearance of the permanent lateral incisors, which erupt in rotated positions or are initially prevented from eruption by the deciduous canines (Fig. 11-2). 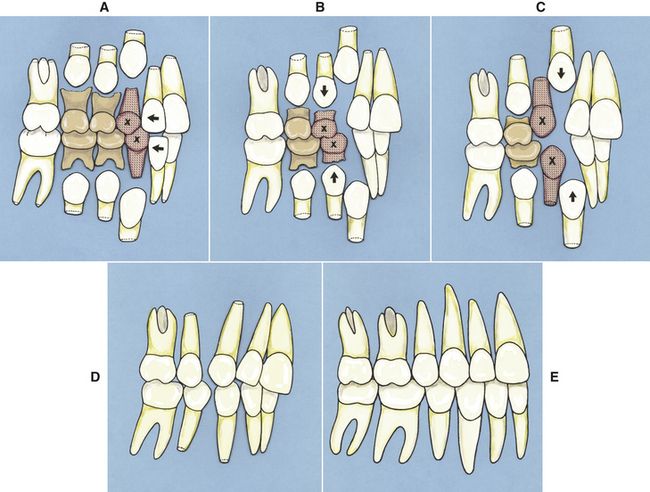 In the most commonly used protocol, the first teeth to be removed are the deciduous canines. The removal of these teeth allows for the eruption, posterior movement, and spontaneous improvement in the alignment of the permanent lateral incisors. In about 6 to 12 months, the removal of the four deciduous first molars is undertaken, followed later by the extraction of the first premolars. It is common to observe that the adjacent teeth erupt toward the extraction sites, with the lower incisors often uprighting as well (sometimes too much so). As soon as the second molars near emergence, fixed appliances can be used to align and detail the dentition.

6 When is serial extraction indicated?

According to Graber,3 serial extraction may be indicated when it is determined “with a fair degree of certainty that there will not be enough space in the jaws to accommodate all the permanent teeth in their proper alignment.” A predicted tooth-size/arch-size discrepancy of 7 to 10 mm (or greater) is an indication for serial extraction.4,5

A primary factor to be evaluated when making a treatment decision concerning serial extraction is the size of the individual teeth. In instances in which tooth sizes are abnormally large, as indicated, for example, by the width of the erupted maxillary central incisors, serial extraction protocols may be appropriate. A central incisor with a mesiodistal width of 10 mm or greater indicates that the patient may have larger than average teeth.2

7 What are the contraindications for serial extraction?

It is well known that serial extraction is not a panacea in all instances of tooth-size/arch-size discrepancy problems, and in fact this protocol is used relatively infrequently in our practice. Care must be taken to avoid lingual tipping of the lower incisors as well as unfavorable changes in the sagittal position of the maxillary and mandibular dentitions. In addition, the initiation of serial extraction procedures may result in unwanted spacing in the dental arches. Routine serial extraction protocols are also not indicated in situations of extreme skeletal imbalance. These protocols are not recommended in instances of full-blown Class II or Class III malocclusions because of the imbalance in the interarch relationship along with the emerging intraarch problem.

8 What happens if the dental arches are too small to allow for the normal alignment of the teeth?

In instances in which a serial extraction protocol is not appropriate, yet arch space is limited, orthodontic and/or orthopedic expansion may be indicated. Rapid maxillary expansion (RME)6,7 refers to the use of appliances that result in true orthopedic expansion of the maxilla, in that changes are produced primarily in the underlying skeletal structures rather than by the movement of teeth through alveolar bone. RME not only separates the midpalatal suture, but also affects the circumzygomatic and circumaxillary sutural systems.

A goal of orthopedic treatment initiated in the mixed dentition is to reduce the need for extractions in the permanent dentition through the elimination of arch length discrepancies as well as the correction of bony base imbalances. The original protocol for RME was two turns per day (0.4–0.5 mm of screw expansion), as advocated by Haas.6 In our practice, a one-turn-per-day (0.20–0.25 mm) protocol is used.1 Another alternative is “slow maxillary expansion,” which refers to having the expander turned once every second or third day.8