9: Preparation of the Mouth

Preparation of the Mouth

Preparation of the mouth is often necessary before dentures are made and may involve the elimination of pathology within the denture-bearing tissues or the creation of a more favourable anatomical environment.

Figure 9.1 Denture stomatitis. The characteristically sharp delineation of the diffuse palatal inflammation by the borders of the denture is seen at the junction of the hard and soft palate, where the line separating the inflamed from normal tissue corresponds to the posterior border of the denture. 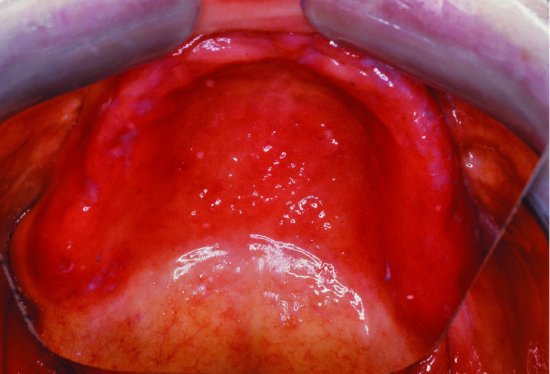 The condition typically involves the mucosa of the maxillary denture-bearing area and does not extend beyond the borders of the denture. It may occur alone but is sometimes seen with two associated conditions, inflammatory palatal papillary hyperplasia and angular stomatitis.

In spite of the lesion’s rather angry appearance the patient rarely complains of soreness, therefore the term ‘denture sore mouth’, which has been used in the past to describe this condition, is inappropriate. Other terms currently used in the literature to describe the condition are:

Denture stomatitis is a common condition, having been reported in 10–60% of patients wearing complete dentures. However, in the general complete denture-wearing population the prevalence of the condition is likely to be closer to the lower limit of this range than to the upper (Radford et al. 1999).

Denture stomatitis has been found to be more common in the elderly, particularly if hyposalivation is present (Figueiral et al. 2007; Campisi et al. 2008).

Denture stomatitis occurs more frequently in females than in males, the ratio being approximately 4:1 (Davenport 1970; Pires et al. 2002). Although the cause of this predisposition to denture stomatitis in females is not known, possible explanations include endocrine imbalance, iron deficiency anaemia, vaginal carriage of candida, a higher oral carrier rate of candida and a greater inclination than males to wear dentures at night.

It appears that behavioural factors, such as wearing the dentures at night and poor denture hygiene, are of major importance in the aetiology of denture stomatitis (Jeganathan et al. 1997; Sakki et al. 1997; Saulman et al. 2006). Wearing the dentures at night can aggravate the effect of both denture plaque and denture trauma by increasing the exposure of the palatal mucosa to both aetiological factors.

Dentures with a reduced masticatory efficiency may encourage a patient to adopt a relatively easily managed high-carbohydrate diet, which favours the growth of candida and increases the adhesion of the microorganism to the denture surface. An increase in the amount and frequency of intake of relatively inexpensive carbohydrates may also be encouraged by the patient’s economic circumstances.

Many different local and systemic factors have been incriminated in the aetiology of denture stomatitis, which is now widely accepted to be multifactorial in origin. The relative importance of microorganisms, in particular Candida albicans, and trauma from the dentures is still debated. However, the bulk of the relevant literature supports the view that the presence of candida organisms within plaque on the impression surface of the denture is the key local factor.

In 1885, G.V. Black, commenting on the condition we now know as denture stomatitis, stated that, ‘Fungi grow readily under any plate irrespective of the material of what it is made. They produce acids which if the mouth and palate are not properly cleaned will cause sore mouth’. He sampled microorganisms from under the dentures of patients with this condition and expressed surprise at their abundance. He concluded that ‘plates are not cleaned often enough and that cleanliness is the chief preventive measure’. Thus, well over 100 years ago Black summarised the modern view of both the aetiology and management of denture stomatitis.

Figure 9.2 Mycelial and yeast forms of Candida albicans obtained from the impression surface of a denture.

In a study of 3450 patients wearing at least one removable denture the main risk factors associated with denture stomatitis were found to be wearing the dentures continuously, low levels of vitamin A and smoking (Shulman et al. 2005). The authors recommended improved denture cleaning and removing the dentures at night.

The evidence suggests that the most important local causative factor of denture stomatitis is the presence of microorganisms within plaque on the impression surface of the denture (Davenport 1970; Budtz-Jørgensen 1974; Olsen 1974; Khasawneh et al. 2002; Ramage et al. 2004). The plaque is present in significant quantities because of inadequate denture hygiene and its effects are maximised if the patient wears the dentures at night. The fungus, Candida albicans (Fig. 9.2), is the organism most commonly associated with denture stomatitis and which has received the most attention in the literature, although other candida species may also be present (Marcos-Arias et al. 2009). This fungus is dimorphic, occurring as both yeast-like blastospores and filamentous pseudohyphae. In denture stomatitis, large numbers of both forms are usually found in plaque on the impression surface of the denture. Relatively few candida organisms are found on the mucosa and there is no evidence that candidal invasion of the mucosa occurs.

Although the evidence for a causal relationship between candida and denture stomatitis is strong, it has been suggested that a variety of bacteria may also play a part in the condition (Kulak et al. 1997).

It has been proposed that trauma to the oral mucosa is a cause of denture stomatitis (Emami et al. 2008). Dentures can traumatise the mucosa either because of the presence of faults in the prostheses such as loss of fit or occlusal imbalance or because the patient exhibits parafunctional activity, such as bruxism, which overloads the tissues. It is sometimes argued that if trauma from the dentures was a major factor in the development of denture stomatitis then the condition would be more commonly seen under mandibular than maxillary dentures. This is because the area of mucosal support for the prosthesis is much less in the mandible than in the maxilla and therefore the load per unit area and potential degree of trauma is significantly greater in the mandible than in the maxilla. However, the widespread inflammation characteristic of denture stomatitis that is seen clinically is a feature of the maxillary, not the mandibular, denture-bearing mucosa.

It should be remembered that palatal inflammation under dentures is a non-specific response to a variety of injurious agents. Therefore diffused inflammation of the denture-bearing mucosa may occasionally be seen, which is not the result of denture plaque or trauma. For example:

The possible interaction of the various predisposing and aetiological factors is complex and uncertain, but a possible scenario which is compatible with the bulk of the relevant literature is as follows (Fig. 9.3). 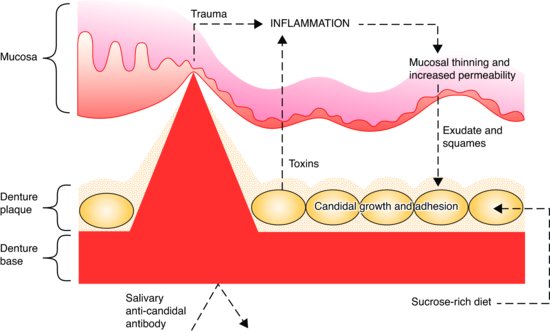 Toxins produced by the candida cells left on the denture surface by deficient hygiene measures, together with trauma from the denture initiate an inflammatory reaction. A resulting thinning of the epithelium results in increased permeability and escape of inflammatory exudates. The exudates, together with desquamated mucosal cells, form a favourable nutrient medium, which promotes the growth of Candida albicans. In addition, these exudates and the sucrose-rich diet which may result from the dietary selection sometimes associated with the wearing of dentures, may contribute to the condition by increasing the adhesiveness of the candidal cells, and thus encouraging the formation of denture plaque. As candidal proliferation occurs, the rate of production of potent toxins by the microorganisms increases. The passage of these toxins into the tissues is facilitated by the thinning and increased permeability of the mucosa. Aggravation of the inflammatory response occurs and so a vicious circle is set up. Anti-candidal antibody is secreted in parotid saliva but the denture base may restrict access of the antibody to the candida cells.

The diagnosis of denture stomatitis is essentially a clinical one made on the basis of the appearance of the palatal mucosa. Identification of the aetiological factors responsible for a particular case may be achieved by noting the following.

It should be noted routinely from the history whether or not the dentures are worn both day and night.

Details of the patient’s denture cleaning regime should be obtained, including the method and frequency of cleaning together with the type of immersion cleanser used. The amount of plaque on the impression surface of the denture should be recorded. This assessment of the quantity and distribution of denture plaque is made easier by applying a disclosing solution to the denture (Fig. 14.10). In those cases where only a little plaque is seen, it should be realised that a patient will sometimes have made an effort to clean the dentures in readiness for the visit to the dentist, which is atypical of their normal denture hygiene regimen.

The degree of denture trauma should be assessed. This can be estimated from the relative functional adequacy of the dentures in terms of occlusion and fit, and from evidence of the presence or absence of parafunctional activity.

The medical history may provide clues that systemic factors are playing a part. If this is the case, or if the condition subsequently fails to respond to local treatment, appropriate investigations should be arranged.

It is important to obtain details of drug therapy in case a particular medication is causing conditions such as a dry mouth (see Chapter 16).

Although denture stomatitis is symptomless and the patient is often unaware of its presence, it should be treated before new dentures are constructed because of the following:

As behavioural factors are so important in the aetiology of denture stomatitis, appropriate modification of the patient’s behaviour is essential for long-term success. Therefore the primary objectives of local treatment of denture stomatitis (Lombardi & Budtz-Jørgensen 1993) are to improve denture hygiene and discourage the patient from wearing the dentures at night.

In addition, in those cases where denture faults are identified and which could be traumatising the denture-bearing tissues, correction of the faults should be undertaken.

Tags: Prosthetic Treatment of the Edentulous Patient
Jan 19, 2015 | Posted by mrzezo in Prosthodontics | Comments Off on 9: Preparation of the Mouth
Premium Wordpress Themes by UFO Themes
WordPress theme by UFO themes