Trial dentures are constructed by setting up denture teeth on shellac or acrylic resin (temporary or permanent) bases. This stage is used to check the accuracy of the registration stage and to assess the appearance of the dentures so that any appropriate modifications can be carried out. This clinical stage may be regarded as the ‘dress rehearsal’.

The trial dentures should be examined first on the articulator and then in the mouth.

Assessment on the articulator

An efficient and reliable examination of the trial dentures is more likely to be achieved if the operator inspects each of the denture surfaces in turn, checking the aspects listed below.

The trial dentures as supplied from the dental laboratory should be neat, clean and tidy. It is important to ensure that all requests included in the prescription completed at the previous clinical stage have been taken through to the trial dentures.

The border regions of the dentures should be shaped to conform to the depth and width of the sulci on the casts. In the upper jaw, the base should normally be extended posteriorly to the post-dam cut or formed in the cast, and in the lower jaw over the pear-shaped pads.

If a relief chamber has been requested, a check should be made that it is present and of the required size and shape. If it has been left with sharp margins these will need to be rounded.

Position of the lower teeth

The teeth on a lower denture should normally be positioned to conform fairly closely to the crest of the mandibular ridge. If there are gross discrepancies between the position of the teeth and the ridge (Fig. 13.1), the teeth may not be in the neutral zone (p. 65) and could become the cause of instability in the mouth. However, this is not invariably the case, so final judgement on this aspect must be delayed until the dentures have been examined in the mouth.

Position of the upper teeth

If a biometric approach is being adopted in the design of the upper denture (Chapter 10), the position of the teeth and the polished surfaces should be checked in relation to the palatal gingival vestige and incisive papilla. The trial denture can also be compared with the record rim if this is still available, or with the positions of the teeth on the existing denture if this has been used as a reference.

Inclination of the polished surfaces

The buccal and lingual aspects of the polished surfaces should converge occlusally so that pressure from the surrounding muscles of the cheeks, lips and tongue contributes to retention rather than displacement (Fig. 4.3). The exception to this rule is found in the upper anterior region where the labial surface of the flange often faces upwards and outwards (Fig. 12.6b).

The polished surface of the denture should normally be smooth for optimum comfort and to facilitate plaque removal. This is particularly important around the necks of the teeth. Where the requirements of appearance make it desirable the polished surface may be contoured and stippled to simulate the mucosal surface. This is usually only indicated for the upper labial flange.

If the patient already has dentures, they should be compared with the trial dentures to see whether any planned similarities or changes, such as arch shape or arrangement of the anterior teeth, have been reproduced correctly.

There should normally be bilateral even contact in the intercuspal position. Opposing cusped teeth should interdigitate accurately. Where an average movement or semi-adjustable articulator has been used excursions should be checked to see if balanced articulation is present.

Assessment in the mouth

The dentures should first be assessed individually for:

Details of the clinical procedures are described in Chapter 7. The dentures should then be assessed together for:

If the prognosis for retention in the upper jaw is good, dislodgement should be expected to be difficult. In the case of the lower denture, retention is often poor because of the relatively small denture-bearing area and the difficulty in obtaining an efficient border seal. If the physical retention of an upper trial denture is not as good as would be expected from the anatomical conditions existing in a particular patient, the cause should be identified and, if found to be a fault in the denture, must be corrected. Denture faults may include the absence of a border seal resulting from:

Movement of either denture of more than 2 mm suggests lack of stability of the denture. A judgement then needs to be made as to whether this is due to:

Extension of the denture bases

The accuracy with which the denture borders conform to the depth and width of the sulci must be determined. The all-important posterior extension of the dentures over the pear-shaped pads in the lower jaw and to the junction of the hard and soft palate in the upper jaw must also be checked.

If marked over-extension of the denture flanges is present, stretching of the sulcus tissues will occur when the denture is inserted into the mouth and their subsequent elastic recoil will cause dislodgement of the denture. Therefore, if the denture is displaced immediately after being seated, over-extension should be suspected. A small degree of over-extension may cause dislodgement of the denture when the clinician gently manipulates the lips and cheeks or when the patient raises the tongue. The exact location of such an error can be determined only by carrying out a careful intra-oral examination. When over-extension is present in areas where the visibility is good, displacement of the sulcus tissues will be seen as the denture is seated. However, in the lingual pouches, visibility is poor, so the clinician will have to make an assessment based on the behaviour of the lower denture as the tongue is moved. Correction of over-extension is by reducing the depth of the offending flange. If this is not carried out, the finished dentures will traumatise the mucosa in that area and will be unstable because of the large displacing forces exerted by the soft tissues.

The presence of under-extension is determined primarily by intra-oral examination, when the depth of the sulcus will be seen to be greater than that of the denture flange. In the case of the upper denture, however, a preliminary indication of under-extension will be given by the existence of poor physical retention. Correction of any under-extension will usually entail taking a new impression in the trial denture. Failure to do this will result in reduced physical retention of the finished dentures and inadequate distribution of load to the tissues.

Figure 13.2 The relationship of the lower posterior teeth to the cheeks and tongue: (a) correct – buccal surfaces of the teeth are in close proximity to the buccal mucosa; the level of the occlusal plane allows the tongue to rest on the occlusal surfaces; (b) incorrect. 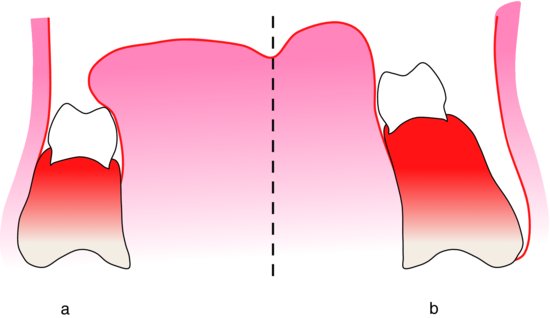 Relationship to the neutral zone

The positioning of teeth in the neutral zone is of particular importance in the case of the lower denture because the physical retention is relatively weak. Identification of the neutral zone will have been attempted while shaping the record block at the earlier visit and now the trial denture must be checked to see if that assessment was correct and has been transferred accurately to the denture. When the lower denture is inserted, it should remain in place when the mouth is half open and the tongue is positioned so that its tip lies just behind the lower anterior teeth. The tongue must not be allowed to adopt the retracted ‘defensive tongue’ posture otherwise it will not be possible to make the required assessment. A useful ‘rule of thumb’ is that the lower denture will usually be stable if narrow teeth are used and are placed as far buccally, or labially, as possible without displacing the cheek and lip tissues. By this means, maximum tongue room is provided within the limits dictated by the lips and cheeks (Fig. 13.2a). If there is space between the buccal surfaces of the posterior teeth and the mucosa of the cheek (Fig. 13.2b), it is almost certain that there is inadequate tongue space.

If displacement of the denture does occur, the cause must be identified and the denture modified to correct the instability. An area where this difficulty commonly arises is the lower anterior region where the lip may exert excessive pressure, causing the denture to move upwards and distally. Correction of this type of fault should be carried out at the chairside so that the effect of the alterations can be assessed in the patient’s mouth. The offending teeth may be reset in the correct relationship to the soft tissues or they may be removed and replaced with a wax rim which is shaped with a wax knife until a stable denture is produced. The dental technician is then asked to reset the teeth in the position indicated by the rim.

If the dentures being constructed are replacements for dentures which have given good service in the past, it may usually be assumed that the relationship of the old denture to the cheeks, lips and tongue is satisfactory and that consequently this relationship should be copied in the trial dentures. Both old and new dentures should be compared in the mouth to see whether this relationship has been faithfully reproduced.

Assessment of the occlusal vertical dimension

The initial impression regarding the freeway space should be backed up by an assessment of the patient’s appearance. If the patient’s facial proportions and contact between upper and lower lips appear to be appropriate when the teeth are occluded, it suggests that the occlusal vertical dimension is correct. This assessment can be broadened by asking the patient to occlude and then to relax the mandible several times while the clinician assesses the freeway space by observing the amount of mandibular movement. Changes in facial proportions, lip posture and jaw relations during these movements will also help the observer to decide whether the occlusal vertical dimension is acceptable.

Finally, the patient should be asked to speak while wearing the trial dentures. The teeth do not normally contact during speech but approach most closely when the ‘S’ sound is made. The separation is known as the closest speaking distance and is usually about 1 mm. If the occlusal vertical dimension of the trial dentures is excessive, the space may be absent; correspondingly, it will be increased if the occlusal vertical dimension is too small. This assessment can be made by asking the patient to count out loud from ‘sixty’ to ‘seventy’.

Correction of the occlusal vertical dimension

When the freeway space is too large, it is corrected by adding the appropriate thickness of wax to the occlusal surfaces of the posterior teeth on one of the dentures, adjusting the wax to produce an even occlusion at the desired occlusal vertical dimension and then re-recording the jaw relationship in the retruded contact position.

When the freeway space is too small, or absent altogether, teeth will have to be removed from one of the dentures and be replaced with a wax rim before the new recording can be made. The decision as to which denture should be reduced in height will depend on how much more freeway space needs to be created, the relationship that the corrected height of occlusal plane would have to the tongue (Fig. 13.2) and the effect any change/>