A stable denture is one that moves little in relation to the underlying bone during function. It is perhaps surprising that what we now refer to as conventional dentures stay in place at all, as they simply rest on mucous membrane and lie within a very active muscular environment. They stay in place if the retentive forces acting on the dentures exceed the displacing forces and the dentures have adequate support. Clearly, when complete dentures are supported by implants, this balance between retentive and displacing forces is greatly tipped in favour of the denture staying in place. For conventional complete dentures, this support is determined by the form and consistency of the denture-bearing tissues and the accuracy of fit of the denture. The relationship of these factors is summarised in Fig. 4.1.

Retentive forces offer resistance to vertical movement of a denture away from the underlying mucosa and act through the three surfaces of a denture. These surfaces may be defined as follows:

1. Occlusal surface: that portion of the surface of a denture which makes contact or near contact with the corresponding surface of the opposing denture or dentition.

2. Polished surface: that portion of the surface of a denture which extends in an occlusal direction from the border of the denture and which includes the palatal surface. It is that part of the denture base which is usually polished, includes the buccal and lingual surfaces of the teeth, and is in contact with the lips, cheeks and tongue.

3. Impression surface: that portion of the surface of a denture that had its shape determined by the impression. It includes the borders of the denture and extends to the polished surface. 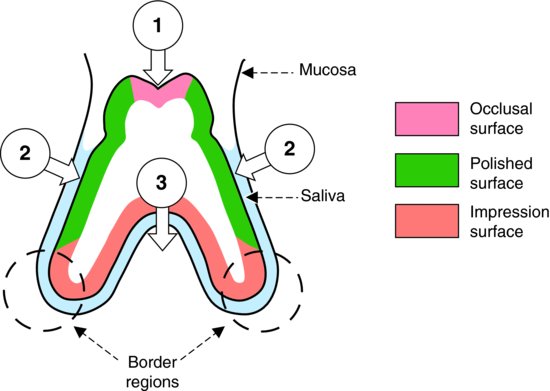 The retentive forces that act upon each of these surfaces (Fig. 4.2) are of two main types, muscular forces and physical forces:

Patients who wear their dentures successfully do so primarily because they have learnt to control them with the muscles of their lips, cheeks and tongue. This skill may be developed to such a high degree that a denture which appears loose to the clinician may be perfectly satisfactory from the patient’s point of view. There are even instances of patients who can eat without difficulty in spite of the fact that the denture has broken into two or more pieces.

The successful muscular control of dentures depends on two factors:

1. The design of the dentures.

2. The ability of the patient to acquire the necessary skill.

During mastication the muscles of the cheeks, lips and tongue control the bolus of food, move it around the oral cavity and place it between the occlusal surfaces of the teeth. In doing so, they press against the polished surfaces of the dentures. If these surfaces are correctly shaped with the buccal and lingual surfaces converging in an occlusal direction, this muscular force will seat the dentures on the underlying mucosa (Fig. 4.3a). In addition to this active muscular fixation of the dentures during function, there will be a certain amount of passive fixation when the muscles are at rest, as the relaxed soft tissues ‘sit’ on the dentures, thereby maintaining them in position. Conversely an incorrectly shaped denture results in the muscular force dislodging that denture (Fig. 4.3b). In short, the muscles can either help or hinder denture stability. 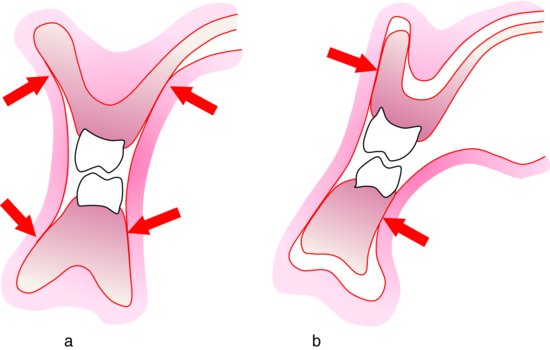 The patient’s ability to acquire the necessary skills to control new dentures tends to be related to biological age. In general, the older the patient, the longer the learning period. In the extreme case, the older or senile patient may not be able to acquire this skill at all and so new dentures may fail even though they are technically satisfactory. It is for this reason that replacement dentures for an older patient should normally be constructed in such a way that the patient’s skill in controlling the previous denture shapes can be transferred directly to the replacements. This is achieved by copying the old dentures as closely as possible, ideally using a technique such as that described in Chapter 8.

A specific example of the muscular control of dentures is seen when a patient incises (Fig. 4.4). The forces tend to tip the upper denture, causing the posterior border to drop. This movement is normally resisted by the dorsum of the tongue, which presses against the denture and reseats it. Patients who complain of difficulty when incising with dentures, which otherwise appear to be satisfactory, should be examined very carefully to establish whether or not tongue control is present. If it is not, it is essential for the clinician to draw the patient’s attention to the problem and to institute appropriate training (Basker & Watson 1991). This takes the form of explaining the central role of the tongue, lips and cheeks in controlling the denture and giving specific advice – such as supporting the posterior border of the upper denture with the tongue when incising. A reduction in displacing forces to bring them within the ability of the patient to control the dentures can be achieved by offering advice, for example, cutting food into smaller pieces before inserting them into the mouth, chewing on both sides of the dental arch simultaneously and starting with softer ‘easier’ foods before progressing to more challenging morsels. Unless purposeful muscular activity is learnt, replacement dentures will fail to overcome the patient’s complaint.

Figure 4.4 As the patient incises, the upper denture is controlled by the tongue pressing against the posterior border. 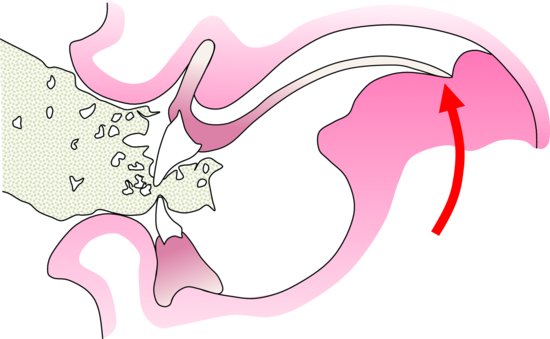 When dentures are first fitted, muscular control takes some time to develop and is therefore likely to be inefficient in the early stages. Thus, it is during this initial learning period that the physical forces of retention are particularly important. The stronger these forces are, the smaller will be the demand on the patient’s skill in controlling the dentures. If the prospects for physical retention are poor, the resulting looseness of the dentures may lead to their rejection by the patient. In difficult cases it may be helpful to advise the use of a denture fixative, as improved retention and stability will give the patient confidence during the period of adaptation (Grasso et al. 1994). There are real physical limitations of conventional complete dentures, particularly the lower denture, and as such it is not surprising that some patients are unhappy with their function despite apparently seeming to have learned to control them well. As an example, such a patient may be aware of movements of the dentures during function although these movements are undetectable to the observer. This may lead to dissatisfaction and concerns for the patient which may ultimately impact on their interaction with other people (Thomason et al. 2009).

As alveolar resorption progresses, the fit of the dentures deteriorates with a consequent reduction in physical retention. However, this will not necessarily result in a reduction in the overall retention, as there will have been a compensating increase in the level of muscular control. Nevertheless, the fit may eventually become so poor that complete compensation is no longer possible and movement of the dentures begins to increase. The degree of denture mobility that elicits a complaint of looseness will vary considerably between individuals; some patients are quite happy with dentures which perform ‘acrobatics’ in the mouth while others complain bitterly about dentures which hardly move at all.

The topic of the patient’s skill is considered further in Chapter 2.

The contribution of physical forces to the retention of a denture is heavily dependent upon the presence of a continuous thin film of saliva between denture and mucosa, which wets both surfaces. The forces of adhesion and cohesion play a part in achieving this condition.

Adhesion is the force of attraction between dissimilar molecules such as saliva and acrylic resin or saliva and mucosa, which promotes the wetting of the denture and mucosal surfaces.

Cohesion is the force of attraction between like molecules, which maintains the integrity of the saliva film. These intermolecular forces of adhesion and cohesion may be thought of as forming a chain between the denture and the mucosa (Fig. 4.5).

Surface tension is the result of cohesive forces acting at the surface of a fluid. It has been suggested that in the case of saliva these cohesive forces result in the formation of a concave meniscus at the surface of the saliva in the border region of the denture. When a fluid film is bounded by a concave meniscus, the pressure within the fluid is less than that of the surrounding medium; thus, in the intra-oral situation a pressure differential will exist between the saliva film and the air (Fig. 4.6). The size of this pressure differential is inversely related to the diameter of the meniscus, i.e. the closer the fit of the denture to the tissues the stronger the retentive force attributable to surface tension. This is discussed further in the section below, ‘Obtaining optimum physical retention’.

Tags: Prosthetic Treatment of the Edentulous Patient
Jan 19, 2015 | Posted by mrzezo in Prosthodontics | Comments Off on 4: Stability of Dentures
Premium Wordpress Themes by UFO Themes
WordPress theme by UFO themes