9 Homologies in structure and function among mucosae: oral, esophageal, and vaginal mucosa

Homologies in structure and function among mucosae: oral, esophageal, and vaginal mucosa

The oral mucosa shares much in common in terms of structure and function with the esophagus and vagina. As in the oral cavity, the soft tissues of the esophagus and vagina are everywhere covered by a stratifying squamous epithelium which is normally non-keratinized, although in the vagina this may tend toward parakeratinization at the midpoint of the menstrual cycle (Nauth, 1993). The epithelium is supported by an elastic connective tissue lamina propria, and there is an encircling smooth muscle layer. This structure will be described in more detail below.

The esophagus extends from the upper esophageal sphincter, which delineates it from the oropharynx, to the lower esophageal sphincter, representing the junction with the gastric mucosa (Gavaghan, 1999). The organization of the tissues reflects their function of transporting ingested food from the oral cavity to the stomach. The extensibility and motility of the mucosal lining is reflected in the presence of a non-keratinized mucosal surface resembling that of the oral lining mucosa. This is separated from the submucosa by a muscularis mucosa, consisting of a smooth muscle and elastic fiber layer, which may serve to reduce the excursion of the luminal lining mucosa as a result of the contractions of the external esophageal muscle, consisting of circular and transverse layers of striated or smooth muscle (Fig. 9.1).

Figure 9.1 Drawing to show the organization of the tissues of the human esophageal lining.

(Modified from Gavaghan, Copyright 1999, with permission from Elsevier.) 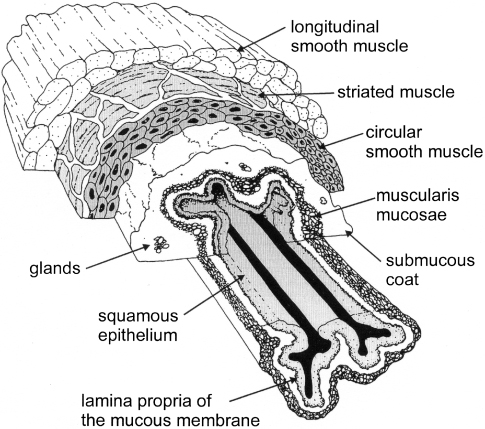 The vagina extends from the vestibule (vaginal introitus) to the uterus where it surrounds the vaginal portion of the uterine cervix, a short distance from the external orifice of the uterus. The vagina consists of an internal mucous membrane with a lamina propria that contains numerous elastic fibers. These extend toward the external smooth muscle coat.

The mucous membrane is continuous above with that lining the uterus. Its inner surface presents two longitudinal ridges, one on its anterior and one on its posterior wall; from these ridges, numerous transverse ridges or rugae extend outward on either side. The epithelium covering the mucous membrane is a non-keratinized stratified squamous tissue. The submucous tissue is very loose and contains numerous large veins together with smooth muscular fibers derived from the muscular coat, which consists of two layers: an external longitudinal layer, which predominates, and an internal circular layer. The longitudinal fibers are continuous with the superficial muscular fibers of the uterus. External to the muscular coat is a layer of fibrous connective tissue representing the adventitia (Fig. 9.2).

Figure 9.2 Drawing to show the organization of the tissues of the human vagina. 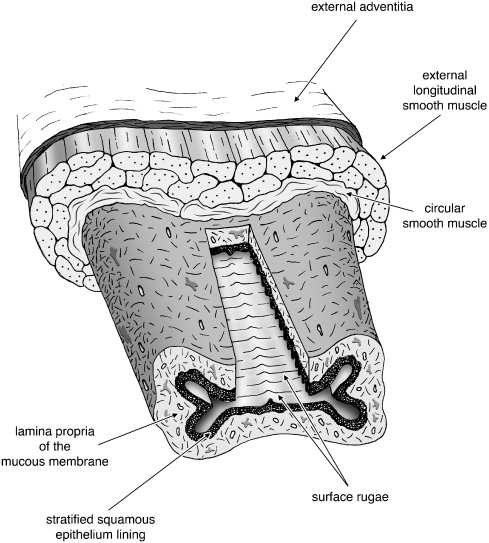 9.3 ORGANIZATION OF THE TISSUES OF ESOPHAGUS AND VAGINA

As pointed out in the first chapter of this volume, the major difference between the mucosa of the oral cavity and esophagus and the rest of the gastrointestinal tract is in the organization of the epithelium, which reflects the different functions of these regions. The lining of the stomach and the small and large intestine consist of a simple epithelium composed of only a single layer of cells which facilitates absorption across the tissue. The esophagus and vagina are lined by a stratified epithelium (Fig. 9.3) composed of multiple layers of cells which show a non-keratinized pattern of differentiation, although this may tend toward parakeratinization in vagina during the midpoint of the menstrual cycle (see below). The mucosal lamina propria consists of cells, blood vessels, neural elements, and fibers embedded in an amorphous ground substance. The lamina propria shows regional variation in the proportions of its constituent elements, particularly in the concentration and organization of the fibers.

Figure 9.3 Histological sections showing the structure of the non-keratinized mucosa of (A) esophagus and (B) vagina. Note the similarities with the oral lining mucosa (Fig. 3.1C). 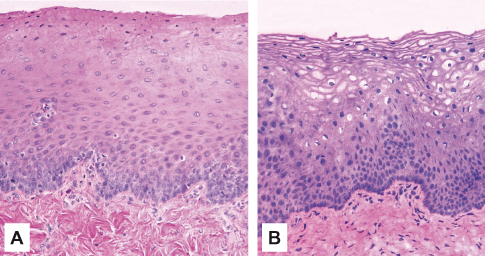 The glandular component of oral and esophageal mucosa is represented primarily by the minor salivary glands. These are concentrated in the submucosa, and the secretions reach the mucosal surface via small ducts. In the esophagus, the minor salivary glands can produce a secretion with high bicarbonate concentration to neutralize refluxing stomach acid (Long and Orlando, 1999). The vagina contains no true glands and the surface moisture is derived from those in the cervix and uterus and from Bartholin’s glands at the introitus.

In the esophagus and vagina, there are nodules of lymphoid tissue consisting of areas extensively infiltrated by lymphocytes and plasma cells. Because of their ability to mount immunologic reactions, such cells play an important role in combating infections.

Keratinocytes of the esophagus and vagina are capable of division so as to maintain a constant epithelial population as cells are shed from the surface. Tissue homeostasis requires differentiation and desquamation at the epithelial surface to be matched by cell division. Many factors, including aging and disease, can alter this balance so that an epithelium may become thicker (hyperplastic) or thinner (atrophic) than normal; in the vagina the fluctuations in estrogen production during the menstrual cycle also exert an effect on proliferation and differentiation of the epithelium (Schaller, 1990).

The progenitor cells are situated in the lower two to three cell layers; in the vagina the majority of proliferative activity take place in the suprabasal layer (Averette et al., 1970). Epithelial proliferation in the esophagus and vagina is controlled by the same biologically active substances, most of which are peptide growth factors collectively termed cytokines, as in the oral mucosa (see Chapter 3). Estimates of the rate of cell proliferation in various epithelia indicate that in general, the rate is higher for cells in thin non-keratinized regions such as floor of mouth than for thicker keratinized regions such as palate and skin (Thomson et al., 1999; see Table 9.1).