At the surface of the oral mucosa, the oral epithelium constitutes the primary barrier between the oral environment and deeper tissues. It is a stratified squamous epithelium consisting of cells tightly attached to each other and arranged in a number of distinct layers or strata. Based on the appearance in histological sections and staining with specific markers such as keratin antibodies (see section on Molecular and cellular basis of differentiation), oral epithelium can be divided into two types: keratinized epithelium, covering areas of masticatory mucosa, such as hard palate and gingiva, and non-keratinized epithelium, covering areas of lining mucosa such as cheeks, soft palate, floor of mouth. The histological appearance of these tissues is described below in more detail.

The epithelial surface of the masticatory mucosa is inflexible, tough, resistant to abrasion, and tightly bound to the lamina propria. It results from the formation of a surface layer of keratin, and the process of differentiation that produces it is called keratinization or cornification. In routine histological sections, a keratinized epithelium shows a number of distinct layers or strata (Fig. 3.1A). The basal layer (sometimes called stratum basale) is a layer of cuboidal or columnar cells adjacent to the basement membrane. Occasionally, the term proliferative or germinative layer (stratum germinativum) is used to describe the cells in the basal region that are capable of division, but these are functional rather than morphological terms and should be avoided in favor of basal layer. Superficial to the basal layer are several rows of larger elliptical cells known as the prickle cell layer or stratum spinosum. This term arises from the appearance of the cells prepared for histological examination; they frequently shrink away from each other, remaining in contact only at points known as intercellular bridges or desmosomes and giving the cells a spiny or prickle-like profile (Fig. 3.3A). The Greek word for prickle, akanthe, is often used in pathologic descriptions of an increased thickness (acanthosis) or a separation of cells caused by loss of the intercellular bridges (acantholysis) in this layer.

Figure 3.1 Main types of maturation in human oral epithelium. (A) Orthokeratin in ginigiva shows a narrow, darkly staining granular layer. (B) Parakeratinization in gingiva shows keratin squames that have retained pyknotic nuclei and a granular layer that contains only a few scattered granules. (C) Non-keratinization in buccal mucosa shows no clear distinction between cell strata, and nuclei are apparent in the surface layers. Note the difference in thickness and epithelial ridge pattern in addition to the patterns of maturation. 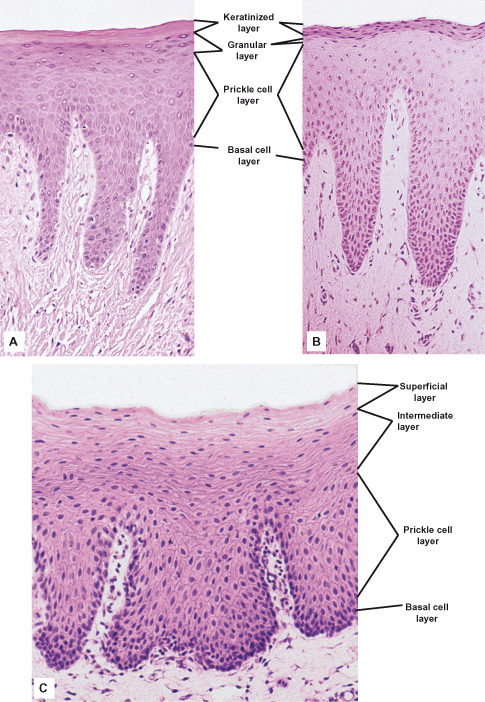 The basal and prickle cell layers together constitute from half to two-thirds the thickness of the epithelium. The next layer consists of larger flattened cells containing small granules that stain intensely with hematoxylin. This layer is the granular layer, or stratum granulosum, and the granules are called keratohyalin granules. In some regions of the masticatory oral epithelium, such as the gingiva, these granules are difficult to discern under the light microscope. The surface layer is composed of very flat (squamous) cells, termed squames, that stain bright pink with eosin and do not contain any nuclei. This layer is the keratinized layer or stratum corneum. Other names sometimes used include cornified layer and horny layer. The pattern of differentiation of these cells is often termed orthokeratinization.

It is not unusual for masticatory mucosa (e.g., parts of the hard palate and much of the gingiva) to show a variation of keratinization known as parakeratinization. In parakeratinized epithelium (Fig. 3.1B), the surface layer stains for keratin, as described previously, but shrunken (or pyknotic) nuclei are retained in many or all of the squames. Keratohyalin granules may be present in the underlying granular layer, although usually fewer than in orthokeratinized areas, so that this layer is difficult to recognize in histological preparations. Parakeratinization is most commonly observed in the gingiva and is a normal event and does not imply disease; this is not true for epidermis, where parakeratinization may be associated with diseases such as psoriasis.

The lining mucosa of the oral cavity, which is present on the lips, buccal mucosa, alveolar mucosa, soft palate, underside of the tongue, and floor of the mouth, has an epithelium that is usually non-keratinized (Fig. 3.1C). In many regions it is thicker than keratinized epithelium and shows a different ridge pattern at the connective tissue interface. Epithelium of the cheek, for example, may reach a thickness of more than 500 µm and has broader epithelial ridges than keratinized epithelium.

3.1.3 Variation of Patterns of Epithelial Differentiation

Although the distribution of keratinized and non-keratinized epithelium in different anatomic locations is determined during embryologic development, there is often some variation of this basic pattern in adults. For example, the normally non-keratinized buccal mucosa develops a thin keratin layer, the linea alba, along the occlusal line as a result of mechanical irritation from chewing. The chemical irritation from the use of smokeless tobacco can also result in keratinization of non-keratinized buccal and labial mucosa (“tobacco keratosis”; Fig. 3.2A). Hyperkeratosis of non-keratinized oral epithelium may be physiologic, but it can also be associated with abnormal cellular changes that eventually lead to cancer of the squamous epithelium. Such hyperkeratotic lesions should be biopsied so that a diagnosis can be made. Similarly, the normal keratin layer of the palate may become greatly thickened in smokers, but such hyperkeratotic epithelium in other ways appears normal (Fig. 3.2B,C). In general, hyperkeratosis of oral epithelium that is normally keratinized represents a physiologic response of the epithelium to chronic physical irritation, similar to that occurring in callous formation on the palms and soles, or to chemical irritation, such as that from tobacco. The presence of inflammation in regions like the gingiva can reduce the degree of keratinization so that it appears parakeratinized or even non-keratinized. This change from one pattern of maturation to another, or the emphasis or depression of an existing trait, is usually reversible when the stimulus is removed. 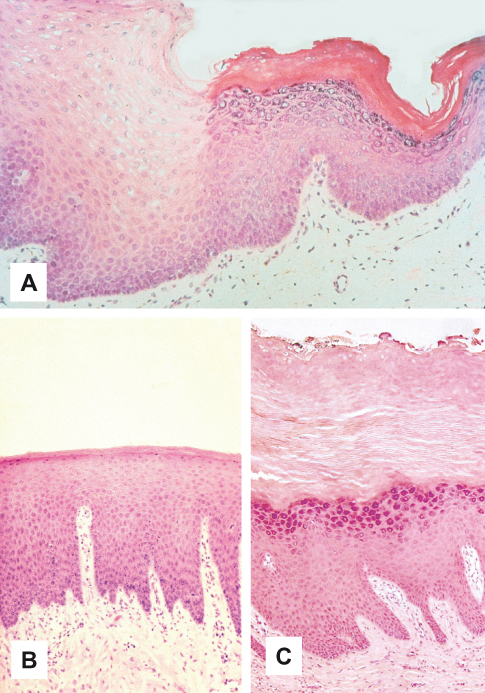 The oral epithelium, like other covering and lining epithelia, maintains its structural integrity by a process of continuous cell renewal in which cells produced by mitotic divisions in the deepest layers migrate to the surface to replace those that are shed (Nakamura et al., 2007). The cells of the epithelium can thus be considered to consist of two functional populations: a progenitor population (whose function is to divide and provide new cells) and a maturing population (whose cells are continually undergoing a process of differentiation or maturation to form a protective surface layer). These two important processes, proliferation and differentiation, are next considered in more detail.

The progenitor cells are situated in the basal layer in thin epithelia (e.g., the floor of the mouth) and in the lower two to three cell layers in thicker epithelia (cheeks and palate). Dividing cells tend to occur in clusters that are seen more frequently at the bottom of epithelial ridges than at the top. Studies on both the epidermis and the oral epithelium indicate that the progenitor compartment is not homogeneous but consists of two functionally distinct subpopulations of cells. A small population of progenitor cells cycles very slowly and is considered to represent stem cells, whose function is to produce basal cells and retain the proliferative potential of the tissue. The larger portion of the progenitor compartment is composed of amplifying cells, whose function is to increase the number of cells available for subsequent maturation.

Progenitor stem cells have the capacity for long-term, error-free self-renewal with a high proliferative potential. In response to injury or when stimulated to proliferate, p75 expressing clones of progenitor stem cells divide into cells of different functions. One daughter resembles the original progenitor stem cell, and the other daughter forms a transient amplifying cell. New transient amplifying cells are involved in the routine proliferative activities. Mature transient amplifying cells are capable of extensive expansion of the cell population. When finished, they undergo maturation or terminal differentiation. Because epithelial stem cells divide infrequently, they may be important in protecting the genetic information of the tissue, for DNA is most vulnerable to damage during mitosis.

Regardless of whether the cells are of the stem or amplifying type, cell division is a cyclic activity and is commonly divided into four distinct phases. The only phase that can be distinguished histologically is mitosis, which can be further subdivided into the recognizable stages of prophase, metaphase, anaphase, and telophase. After cell division, each daughter cell either recycles in the progenitor population or enters the maturing compartment.

Epithelial cells in different tissues divide at greatly different rates. Apart from measuring the number of cells in division, it is also possible to estimate the time necessary to replace all the cells in the epithelium. This is known as turnover time of the epithelium and is derived from a knowledge of the time it takes for a cell to divide and pass through the entire epithelium.

Different techniques have led to a wide range of estimates of the rate of cell proliferation in the various epithelia; but, in general, epithelial turnover time is slower in the skin than in the oral mucosa which, in turn, is slower than the intestine (see Table 3.2). Regional differences in the patterns of epithelial maturation appear to be associated with the different turnover rates; for example, non-keratinized buccal epithelium turns over faster than keratinized palatal epithelium.

Epithelial proliferation in oral mucosa, skin, and many other tissues is controlled by locally secreted peptide growth factors, or cytokines, including epidermal growth factor (EGF), keratinocyte growth factor (KGF), interleukin-1 (IL-1), and transforming growth factors (TGFs) α and β. These have antagonistic effects, so while EGF upregulates division, it is depressed by TGF-β. Cytokine activity is apparently modulated by families of proteins that mediate cell-to-cell (integrins) and cell-to-matrix adhesion (cadherins) in epithelia. Thus, integrins may interact with EGF receptors to amplify proliferation signals, whereas cadherins may reduce the cells’ responsiveness to EGF (Müller et al., 2008).

Mitotic activity can also be affected by factors such as the time of the day, stress, and inflammation. For example, the presence of slight subepithelial inflammatory cell infiltration stimulates mitosis, whereas severe inflammation causes a marked reduction in proliferative activity. These effects probably represent the influence of different levels of proinflammatory cytokines and may be important when attempting to determine epithelial turnover in regions that are frequently inflamed, such as the dentogingival junction (see Chapter 6).

3.3.1 Molecular and Cellular Basis of Differentiation

The genetic regulation of the transition from proliferation to differentiation is probably controlled by small non-coding RNAs (microRNAs; Yi et al., 2008) that promote exit from the cell cycle.

Epithelia differentiate according to their specific locations within the oral cavity and their related protective and immunologic functions (Gibbs and Ponec, 2000; Lindberg and Rheinwald, 1990). Cells of the basal layer are the least differentiated oral epithelial cells. They contain not only organelles commonly present in the cells of other tissues but also certain characteristic structures that identify them as epithelial cells and distinguish them from other cell types. These structures are the filamentous strands called tonofilaments and the intercellular bridges or desmosomes (Fig.