2 The organization of oral mucosa

The organization of oral mucosa

The oral cavity consists of two parts: an outer vestibule, bounded by the lips and cheeks, and the oral cavity proper, separated from the vestibule by the alveolus bearing the teeth and gingiva. The superior zone of the oral cavity proper is formed by the hard and soft palates, and the floor of the mouth and base of the tongue form the inferior border. Posteriorly, the oral cavity is bounded by the pillars of the fauces and the tonsils. The oral mucosa shows considerable structural variation in different regions of the oral cavity, but three main types of mucosa can be recognized, identified according to their primary function: masticatory mucosa, lining mucosa, and specialized mucosa. The anatomic location of each type is shown diagrammatically in Figure 2.1, and the types are fully described later in the chapter. Quantitatively, the larger part of the oral mucosa is represented by lining mucosa, amounting to approximately 60% of the total area, with masticatory mucosa and specialized mucosa occupying relatively smaller areas.

Figure 2.1 The anatomic locations of the three main types of mucosa in the oral cavity. Masticatory mucosa is shown by black shading; lining mucosa by gray shading; specialized mucosa by the stippled area. 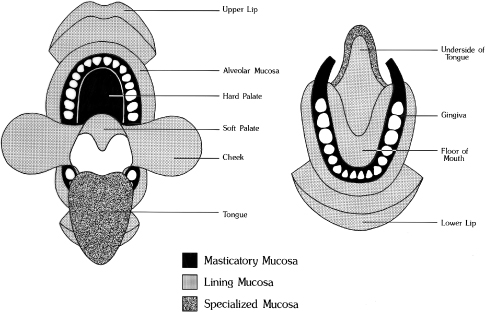 Although the oral mucosa is continuous with the skin, it differs considerably in appearance. Generally it is more deeply colored, most obviously at the lips (where the bright vermilion zone contrasts with the skin tone). This coloration represents the combined effect of a number of factors: the concentration and state of dilation of capillaries in the underlying connective tissue, the thickness of the epithelium, the degree of keratinization, and the amount of melanin pigment in the epithelium. Color gives an indication as to the clinical condition of the mucosa; inflamed tissues are red, because of dilation of the blood vessels, whereas normal healthy tissues are a paler pink (Fig. 2.2A).

Figure 2.2 The oral mucosa lining part of the vestibule. (A) The attached gingiva (G) is pale, and stippling is most evident in the interproximal regions (arrows). There is an abrupt junction (indicated by the dashed line) between the gingival and the alveolar mucosa (AM) which merges with the labial mucosa (LM). (B) Vermilion zone adjoining the labial mucosa. Several small globules on the mucosa (arrows) represent sites of secretion, where minor salivary gland ducts open to the surface. 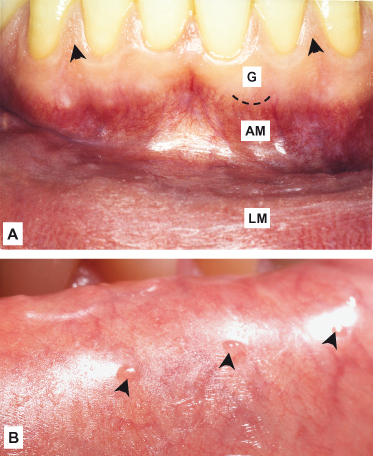 Other features that distinguish the oral mucosa from skin are its moist surface and the absence of appendages. Skin contains numerous hair follicles, sebaceous glands, and sweat glands, whereas the glandular component of oral mucosa is represented primarily by the minor salivary glands. These are concentrated in various regions of the oral cavity, and the openings of their ducts at the mucosal surface are sometimes evident on clinical examination after drying the surface (Fig. 2.2B).

Sebaceous glands are present on the lips, labial mucosa, and buccal mucosa in over three quarters of adults and have been described occasionally in the alveolar mucosa and dorsum of the tongue. They are not associated with hair follicles and are sometimes called sebaceous follicles. Clinically, they appear as pale yellow spots (Fig. 2.3A), sometimes called Fordyce’s spots (or granules) or