4 The interface between epithelium and connective tissue

The interface between epithelium and connective tissue

Figure 4.1 (A) Gingival epithelium stained by the PAS method shows the basement membrane (arrows) and extensive interdigitation between epithelium and connective tissue. Scanning electron micrographs of gingival epithelium separated at this interface shows the circular orifices in the underside of the epithelium (B) into which fit the cone-shaped papillae of connective tissue (C). ((B) and (C) from Klein-Szanto and Schroeder, 1977, with permission from Wiley-Blackwell.) 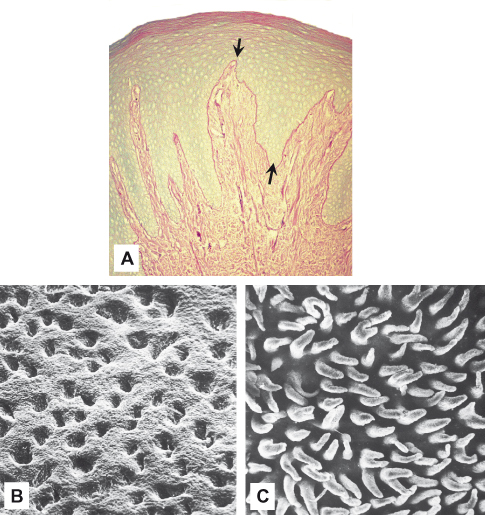 4.1 ORGANIZATION OF THE NORMAL INTERFACE

In routine hematoxylin and eosin stained histological sections of oral mucosa, the basement membrane between the epithelium and connective tissue appears as a structureless band, but it stains brightly with reagents such as periodic acid-Schiff (PAS) which detects glycogen, neutral mucosubstances, glycolipids, and phospholipids (Fig. 4.1A). Ultrastructurally, this region is described as the basal lamina or basal complex and is highly organized (Fig. 4.2). It consists of a layer of finely granular or filamentous material about 50 nm thick, the lamina densa, which runs parallel to the basal cell membranes of the epithelial cells but is separated from them by an apparently clear zone some 45 nm wide, the lamina lucida. Hemidesmosomes represent condensations of the proteins bullous pemphigoid antigen and intermediate filament-associated protein on />