7 Development and aging of the oral mucosa

Development and aging of the oral mucosa

Although all oral mucosa is composed of a stratified epithelium supported by connective tissue, there are marked regional differences that were described in the previous chapter. Minor variations may be superimposed on this basic pattern, such as keratinization of the buccal mucosa along the occlusal line, but the basic regional differences are predetermined and develop early in the embryo. As has been mentioned earlier, the type of epithelium that develops in a particular site appears to be determined primarily by the connective tissue on which it rests, both during embryonic development and in the adult, and instructions pass between these two components of the mucosa throughout the life of the tissue. These so-called epithelial-mesenchymal interactions are considered in more detail later, and first we briefly describe the developmental stages of oral mucosa.

The primitive oral cavity develops by fusion of the embryonic stomatodeum with the foregut after rupture of the buccopharyngeal membrane, at about 26 days of gestation, and thus comes to be lined by epithelium derived from both ectoderm and endoderm. The precise boundary between these two embryonic tissues is poorly defined, but structures that develop in the branchial arches (e.g., tongue, epiglottis, pharynx) are covered by epithelium derived from endoderm, whereas the epithelium covering the palate, cheeks, floor of mouth, gingivae, and lips is of ectodermal origin (Winning and Townsend, 2000).

By 5 to 6 weeks of gestation, the single layer of epithelial cells lining the primitive oral cavity has formed five or more layers, and by 8–10 weeks, there is a multilayered epithelium with marked thickening in the region of the vestibular dental lamina complex. In the central region of this thickening, cellular degeneration occurs at 10 to 14 weeks, resulting in separation of the cells covering the cheek area and the alveolar mucosa and thus forming the oral vestibule. At about this time (8–11 weeks), the palatal shelves elevate and close, so that the future morphology of the adult oral cavity is apparent.

At this stage, the future lamina propria is composed of a subectodermal condensation of branching cells with a minimal, intercellular fibrillar component. A denser fibrillar accumulation along the epithelial interface heralds the development of the basement membrane. All areas are now lined with multilayered ectoderm, and it becomes possible to distinguish sites destined for keratinization, such as the alveolar ridge and hard palate, from those that will be non-keratinized, like cheek, lip, and soft palate. The future keratinized regions have columnar basal cells, tonofilaments, and cytoplasmic processes projecting into the mesenchyme.

Between 7 and 10 weeks, the surface features of the oral mucosa such as the incisive papilla and palatal rugae are developing. The lingual epithelium shows specialization at about 7 weeks when the circumvallate and foliate papillae first appear, followed by the fungiform papillae. Within these papillae, taste buds soon develop. The filiform papillae that cover most of the anterior two-thirds of the tongue become apparent at about 10 weeks. By 10 to 12 weeks, the future lining and masticatory regions show stratification of the epithelium and different morphology. Those areas destined to become keratinized (e.g., hard palate and alveolar ridge of gingiva) have darkly staining, columnar basal cells that are separated from the underlying connective tissue by a prominent basement membrane. Short connective tissue papillae are also evident. By contrast, the epithelium that will form areas of lining mucosa retains cuboidal basal cells, and the epithelium–connective tissue interface remains relatively flat. In the mesenchyme, capillary buds and reticulin fibers appear, and in the future masticatory regions, there are more cells and fibers, including collagen, evident from weeks 8 to 11 (Winning and Townsend, 2000). Although the collagen initially shows no particular orientation, as the fibers increase in number, they tend to form bundles; immediately subjacent to the epithelium, these bundles are perpendicular to the basement membrane.

In skin, a distinctive surface layer known as a periderm develops at 8 weeks. It is composed of large, bulbous cells which give the surface an undulating appearance and which are shed into the amniotic cavity. This layer is retained until a keratinized layer has differentiated beneath it by week 26, after which it is shed. Although the term periderm has been used to describe the surface layer of developing oral epithelium, it is never as distinctive as that on the embryonic skin surface, although it may be seen in the region of the mucocutaneous junction (see Fig. 7.1B).

Figure 7.1 (A) Part of a sagittal section through the oral cavity of a 15-week human embryo showing the tongue (T), floor of the mouth, alveolar ridge with a tooth bud in situ, hard palate (HP), and lip (L). Differences in thickness are already apparent between the epithelia of the labial mucosa, alveolar ridge, floor of the mouth, and tongue, and papillae are evident on the dorsum of the tongue. (B) Enlargement of the outlined area in (A) showing the distinctive surface layer of periderm (arrow) on the lip. 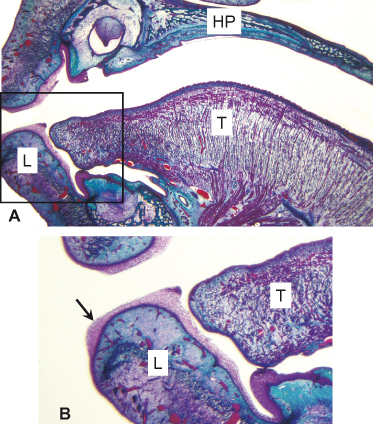 Between 13 and 20 weeks of gestation, the oral epithelia thicken, reaching 15 cell layers in some regions (Fig. 7.1). Desmosomes are well formed, and the “prickle cell” character of the mid-level cells is apparent while the development of sparse keratohyalin granules permits a distinction between the prickle cells and granular layer. At the end of this period (20–24 weeks), the surface layers of masticatory mucosa appear parakeratinized; orthokeratin is not thought to be present until after the teeth erupt during the postnatal period, at approximately 6 months after birth. Cytokeratins, a marker of epithelial differentiation, are similar in all mucosal regions until 10 weeks and resemble those of the adult lining epithelium, with the addition of cytokeratins 8, 18, and 19 (Pelissier et al., 1992). From week 11, regions of masticatory mucosa (gingiva and hard palate) begin to develop cytokeratins characteristic of these sites (cytokeratins 1, 2, 10, and 11). Involucrin can be detected at 9 weeks and reaches levels found in adult tissue by 15 weeks (Klein-Szanto, 1985).

In the lamina propria, the network of mesenchymal cells lose contact with their neighbors and are recognizable as fibroblasts. Collagen fibers increase in number and size, and between 16 and 20 weeks, the elastic fibers become prominent in the future regions of lining mucosa. The basement membrane becomes more clearly defined and hemidesmosomes and basal lamina anchoring fibrils appear. Epithelial ridges elongate in future masticatory regions.

Melanoblasts, the precursors of melanocytes, arise from neural crest cells and migrate into the oral mucosa from the 11th week onward. Once in the epithelium, melanocytes form a self-perpetuating population for which the microphthalmia transcription factor, MITF, appears to be important for proliferation and maintenance (Lin and Fisher, 2007). Langerhans cells appear in oral mucosa at the same time as melanocytes and are probably capable of division so as to maintain a local population, although circulating precursors may augment these cells in damaged tissue (Barrett et al., 1996).

Merkel cells have been detected in oral epithelium at the/>