Previous chapters have dealt with wax-pattern materials, investment materials and casting alloys. This chapter describes how the investment mould is formed and how the wax pattern is replaced by the alloy using a casting process. One of several methods can be used for casting depending upon the alloy which is to be used.

There are several faults which can occur in alloy castings, most of which can be traced to incorrect selection of materials or faulty technique.

The various components of a typical investment mould are illustrated in Fig. 9.1.

The mould cavity is formed by allowing the investment to set around the wax pattern and associated sprue former and spruce base (crucible). After allowing the investment material to set, the sprue base and former are removed and the wax pattern ‘burnt out’ to leave the completed mould cavity. The choice of investment material depends on the type of alloy which is to be cast. The casting ring liner serves a dual purpose. It forms a relatively pliable lining to the inner surface of the rigid metal casting ring. This allows almost unrestricted setting expansion and thermal expansion of the investment. In addition, its thermal insulating properties ensure that the investment mould does not cool rapidly and contract after removal from the ‘burn out’ oven.

Heating of the investment mould should be carried out at a rate which enables steam and other gases to be liberated without cracking the mould. Also it is important that the temperature to which the mould is heated is adequate to enable thermal expansion and inversion to occur and that this temperature is not allowed to fall significantly before casting begins. Casting into a quartz-containing investment mould should be carried out with a mould temperature above 650°C if adequate expansion due to thermal expansion and inversion is to be achieved. This requires that the mould be heated to about 750°C to allow for cooling which may occur before casting commences. For cristobalite-containing investment moulds the mould temperature should be above 350°C at the time of casting and this requires heating to about 450°C to allow for cooling effects.

The balance between the molten alloy temperature and mould temperature is important in terms of producing a complete and accurate casting with a fine grain structure. The alloy should be hot enough to ensure that it is fully molten and remains so during casting into the mould, but should not be so hot that it begins to oxidize or that crystallization is delayed when it reaches the extremities of the mould cavity or causes damaging interactions with the mould walls. The mould temperature should be great enough to ensure complete expansion of the mould and to prevent premature crystallization leading to incomplete filling of the mould by alloy, but not great enough for crystallization to be delayed for so long that a coarse grain structure forms.

Factors such as length and diameter of the sprue and the distance of the mould cavity from the base of the mould all have an effect on the quality of the casting. For large castings, two or more sprues may be necessary in order to ensure that molten alloy is able to reach all parts of the mould cavity before solidifying. 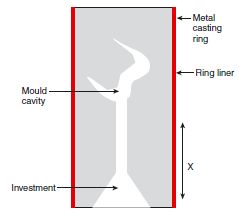 />
Only gold members can continue reading. Log In or Register to continue