According to the 2005 World Health Organization (WHO) classification of tumors of the salivary glands, acinic cell carcinoma is defined as “a malignant epithelial neoplasm of salivary glands in which at least some of the neoplastic cells demonstrate serous acinar cell differentiation, which is characterized by cytoplasmic zymogen secretory granules. Salivary ductal cells are also a component of this neoplasm.”

Acinic cell carcinoma occurs over a wide age range, affecting children as young as a few years old and the very elderly with a fairly even age distribution between the second and seventh decades. Acinic cell carcinoma is slightly more common in female patients. Most acinic cell carcinomas involve the parotid gland with a smaller subset of cases occurring in the intraoral minor salivary glands (buccal mucosa and upper lip). They only are encountered rarely in the submandibular and sublingual glands. The typical presentation is that of a slowly growing, often painless, unfixed mass in the parotid region with occasional patients manifesting facial nerve palsy. Bilateral examples are rare.

Acinic cell carcinomas range from relatively well-circumscribed, solitary nodules to masses that appear ill-defined with irregular edges. Most are about 1–3 cm in the greatest dimension. Their cut surface is tan-red, solid, or cystic and lobulated, with a consistency that varies from soft to firm.

The entity, acinic cell carcinoma, derives its name from the presence of numerous disorderly arranged microacinar structures that resemble the normal acini of benign salivary gland tissue (Figure 9.1). Typically, the smear pattern from aspirates of acinic cell carcinoma is loosely cohesive; tightly cohesive epithelial fragments are not seen. Sometimes fibrovascular cores can be identified producing a pseudopapillary appearance. When this occurs, a perivascular growth pattern often is appreciated. Of note, in the usual variety of acinic cell carcinoma, benign ductal epithelial cells are not observed. In most cases, the smear background is clean (Table 9.1).

FIGURE 9.1. The smear pattern is dominated by characteristic acinar-like architectural arrangements of the tumor cells (a, Papanicolaou stain, ×200). In other fields, the tumor exhibits a discohesive smear pattern consisting of numerous large tumor cells with abundant granular cytoplasm and small, round, eccentrically located nuclei (b, Diff-Quik stain, ×100). 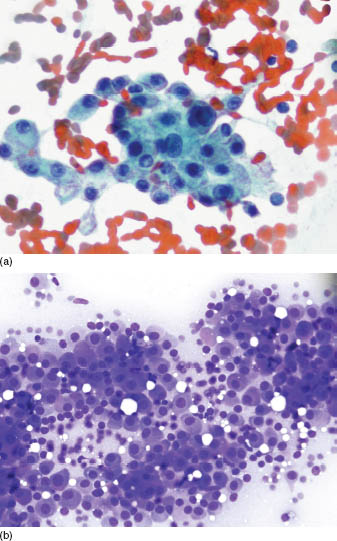 FIGURE 9.2. On medium power, the bland nature of the nuclei and the abundant, fine, granular cytoplasm can be appreciated (Diff-Quik stain, ×200). 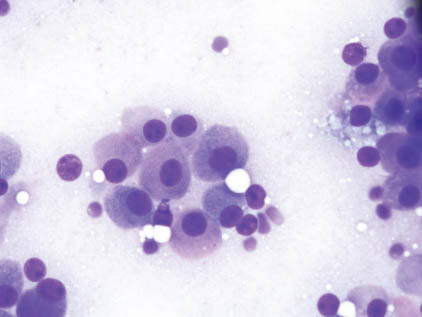 FIGURE 9.3. Numerous small, reddish granules are noted in the cytoplasm of the Papanicolaou-stained slide (Papanicolaou stain, ×400). 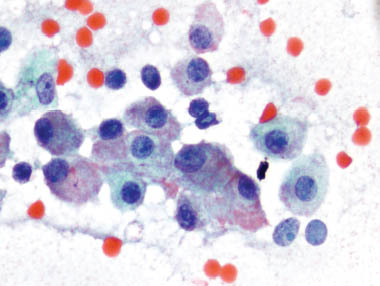 FIGURE 9.4. The histopathologic appearance resembles the findings on the FNA (hematoxylin and eosin stain, ×400). 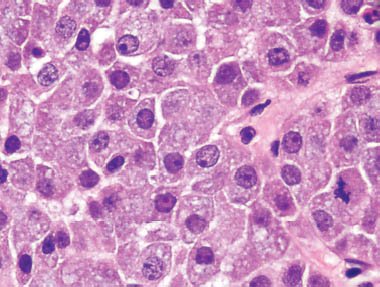 The nuclei, which have a fine to coarse granular chromatin pattern, are round to oval in shape, of medium size, and tend to be centrally located. Occasionally, small nucleoli can be identified. In some cases, numerous naked nuclei may be identified in the smear background. These stripped nuclei reflect the fragile nature of the cytoplasm of the tumor cells and are more likely to be present if harsh smearing techniques are employed. When observed in large numbers, the stripped nuclei may resemble lymphocytes. In other cases, the smear background may contain moderate numbers of true lymphocytes admixed with the neoplastic cells (Table 9.1).

Although acinic cell carcinomas are characterized by serous acinar cell differentiation, several architectural growth patterns and a mixture of cell types exist. They may be solid, microcystic, papillary cystic, or follicular. In addition to the acinar cells, cellular constituents include the intercalated ductal, vacuolated, clear, and nonspecific glandular cells. Tumors may show a mixture of these patterns or cell variants or more commonly manifest one pattern and one cell type.

The neoplastic serous acinar cells are large, polygonal with abundant granular pale basophilic cytoplasm, and eccentrically placed, uniform, round nuclei. Similar to normal acinar cells, the cytoplasmic zymogen-like granules are periodic acid Schiff (PAS) positive diastase-resistant, and mucin negative. These stains are especially useful in those tumors in which the acinar cells are a minority. Acinar cell-predominant acinic cell carcinomas are distinguished from normal salivary glands by their sheeting architecture (as opposed to lobular in normal glands), lack of striated ducts, and distended polygonal cytoplasm.

The intercalated duct-like cells are identified in most acinic cell carcinomas but may predominate in up to a third of the tumors. They are somewhat smaller than their acinar counterpart and are typically cuboidal with round, centrally placed nuclei similar in size to those of the acinar cells and often containing a small nucleolus. Unlike the acinar cells, their cytoplasm is eosinophilic to amphophilic. Architecturally, they form back to back, variably sized luminal spaces.

Vacuolated cells may contain one large vacuole that occupies the entire cytoplasm or form multiple small vacuoles with the remaining cytoplasm appearing as eosinophilic to amphophilic. The vacuoles themselves are PAS and mucin negative, although they may contain PAS positive, diastase-resistant, zymogen-like granules. Approximately 10% of acinic cell carcinomas show predominance of vacuolated cells. />