The parotid gland is involved most often, and it accounts for 45% of cases. The most common minor salivary glands affected are in the palate and buccal mucosa.

Clinical features depend on the grade of the tumor; usually, low-grade tumors are slow growing, cystic, and present as a painless mass with a 5-year survival rate of approximately 98%. High-grade tumors grow fast and have a high risk for lymph node and distant metastasis, as well as local recurrence. The 5-year survival rate is approximately 56%. Other symptoms include pain and facial nerve palsy. Radiologically, the appearance varies according to the grade; in addition, MEC can mimic other tumors in their radiologic appearance, and it should always be considered in the differential diagnosis. Low-grade tumors are well-circumscribed tumors that are enhanced with heterogeneous cystic component on computed tomography (CT) scan. The differential diagnosis includes pleomorphic adenoma and Warthin’s tumor. However, high-grade tumors appear as an infiltrating, poorly defined, enhancing mass on CT scan. The differential diagnosis includes adenoid cystic carcinoma and other less common high-grade primary carcinomas, lymphoma and metastasis.

On histological grounds, MEC is graded into low, intermediate, and high grades. This division depends on multiple histological parameters that include the presence of cystic spaces, cellular differentiation, proportion of mucous cells, growth pattern, type of invasion, and cytological atypia. However, the application of three-tier grading system on cytological smears is difficult and cannot be reproducible. Therefore, cytological diagnosis by fine needle aspiration (FNA) usually is classified into low- and high-grade MEC. The hallmark for MEC diagnosis by FNA is the presence of a variable mixture of the three-cell components, which includes mucinous, squamoid, and intermediate cells. In low-grade tumors, extracellular mucin can be found in the background. It stains pale purple with the modified Romanowsky (Diff-Quik) stain and pale blue green with Papanicolaou stain (Figure 7.1). The cellular components are observed as groups and clusters, sometimes with identifiable transition from intermediate to mucinous cells (Figures 7.2 and 7.3). The intermediate cells resemble metaplastic cells and have a moderate amount of cytoplasm and round small nuclei. Mucinous cells have abundant vacuolated cytoplasm and may be columnar or signet-ring shaped. Squamoid cells have dense cytoplasm and polygonal shape. Usually, the mucinous cells predominate in low-grade tumors. Occasionally, one may observe clear and oncocytic cells mixed with these mucinous cells. The degree of cellular and nuclear atypia in low-grade MEC is minimal, and the aspirate smears lack tumor diathesis.

FIGURE 7.1. Low-grade MEC. At low power, there are groups of cells in a myxoid background. The mucin appears as pale, greenish blue on Papanicolaou stain (40×). 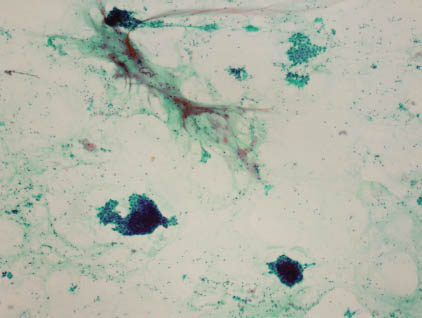 FIGURE 7.2. Low-grade MEC. At high power, this cluster contains both squamoid cells with well-defined hard cytoplasm and mucinous cells with vacuoles of mucin (400×). 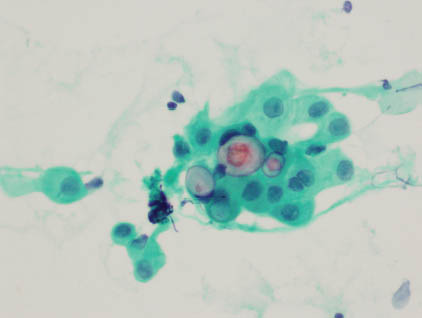 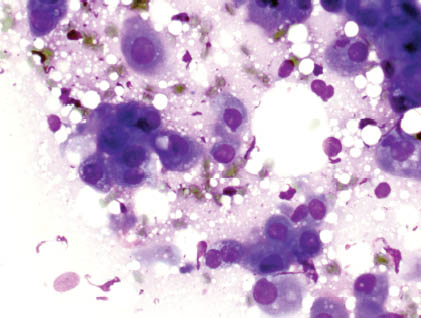 Aspirates from high-grade tumors show groups of cells with obvious malignant features including nuclear pleomorphism, hyperchromasia, clumped chromatin and prominent nucleoli (Figures 7.4 and 7.5). Mucinous cells are scarce compared with the squamoid and intermediate cells. In addition, it is common to view tumor diathesis in the background. 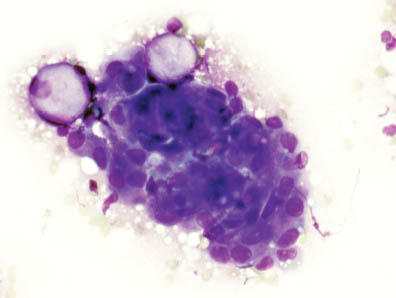