Clinical features encompassing age and gender distribution are not surprisingly similar to those of pleomorphic adenoma, considering that most agree these tumors represent monomorphic variants of mixed tumors. They occur typically in the major and minor salivary glands with roughly equal gender predilection, a broad age range of 9–85 years of age, and an average age of 44 years. These tumors tend to be slow growing and are usually asymptomatic.

Myoepitheliomas may comprise one or more than one morphologic cell type. Most spindle and clear cell subtypes occur in the parotid gland, whereas the plasmacytoid/hyaline variant is encountered more commonly in minor salivary glands, particularly in the palate.

Though most myoepitheliomas are benign, the spindle cell and particularly the clear cell subtypes have demonstrated malignant variants, demonstrating invasive characteristics and significant cytological atypia. Spindle cell differentiation correlates with aggressive behavior. It has been suggested that the clear cell variant be regarded as potentially malignant as local recurrences, lymph node metastases, and tumor-related deaths have been described. Hyaline/plasmacytoid varieties tend to behave in a benign fashion. Malignant myoepitheliomas may develop de novo or via malignant transformation of pleomorphic adenoma/basal cell adenoma and occasionally in a benign myoepithelioma.

Benign myoepithelial neoplasms may be divided into the following morphologic cellular subtypes: spindle cell, plasmacytoid/hyaline, epithelioid, and clear cell types, which may occur in pure form or in various proportions in a single neoplasm. The fine needle aspirates of these neoplasms may be cellular.

Single cells or loosely cohesive groups of cells are present with variable features depending on the predominating cell type. Typically, there are loosely cohesive fusiform/spindle cells, often stellate, which possess delicate, ill-defined cytoplasm and elongate nuclei with fine chromatin and inconspicuous/small nucleoli (Figure 13.1). Epithelioid cells possess better-defined cytoplasmic borders with round to ovoid nuclei and evenly distributed fine chromatin. There is a lack of honeycombed sheets of epithelial cells and a lack of chondromyxoid matrix in contrast to pleomorphic adenoma (Figure 13.2). 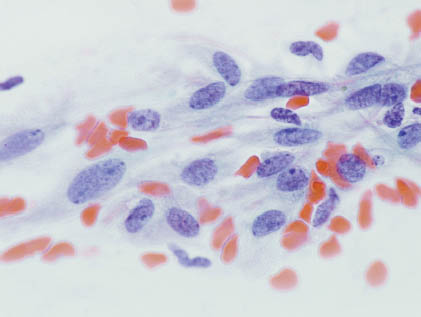 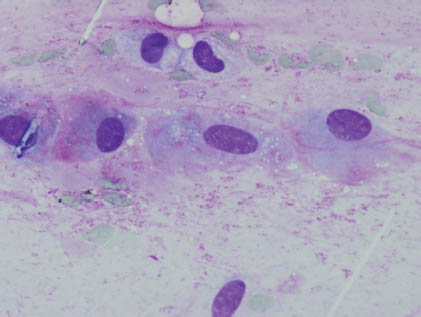 Plasmacytoid/hyaline cells are endowed with eosinophilic, dense, and nongranular cytoplasm as a result of prekeratin intermediate filaments imparting a hyaline quality to the fibrillar or glassy cytoplasm, and these cells possess eccentric, sometimes pleomorphic nuclei occasionally accompanied by rare mitoses. Stromal elements are characteristically lacking. Clear cells of the clear cell variant possess cells with glycogen-rich cytoplasm and are accompanied by nuclei with evenly distributed fine chromatin. The key diagnostic features are summarized in Table 13.1.

Histologically, most examples in the parotid gland are encapsulated, whereas those in minor salivary glands are unencapsulated. As previously mentioned, similarities to pleomorphic adenoma are described; however, there is predominance or a nearly exclusive population of myoepithelial cells comprising myoepitheliomas (Figure 13.3). 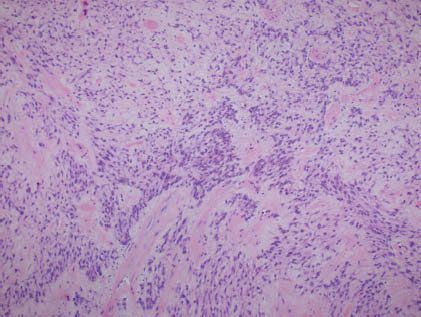 Spindle cell myoepitheliomas overlap morphologically with other spindle cells tumors, including those of smooth muscle, Schwann cell (either of which may show Verocay bodies), or fibroblast origin. Immunohistochemical staining usually aids in this distinction.

Plasmacytoid myoepitheliomas superficially may resemble plasmacytomas though electrophoresis, kappa and lambda immunostaining, a lack of distinctive nuclear cytomorphologic features (clockface chromatin), and a lack of perinuclear hof aid in the exclusion of plasmacytomas.

Clear cell myoepithelioma, which demonstrates glycogen on periodic acid-Schiff (PAS) stain, requires distinction from other tumors with clear cell features, including sebaceous neoplasms (which demonstrate fat), mucoepidermoid carcinoma (which demonstrates mucin), acinic cell carcinoma (which is typically negative for special histochemical staining properties), and clear cell change in oncocytic tumors. Other differential diagnostic possibilities in appropriate clinical settings may include metastatic renal cell carcinoma (which demonstrates glycogen and immunohistochemically is positive for vimentin and CD10, and is negative for HMW-CK and carcinoembryonic antigen [CEA]), and clear cell carcinoma and not otherwise specified (NOS)/hyalanizing clear cell carcinoma usually present in the oral cavity (a diagnosis of exclusion of other neoplasms), which notably include conspicuous fibrohyaline stroma. Epithelial-myoepithelial carcinoma may enter the differential diagnosis; however, typically, the characteristic dual cell population is evident. Malignant myoepithelioma may bear cytomorphologic resemblance, though increased nuclear atypia and the clinical presentation may raise suspicion for this entity. Histologic follow-up of epithelial-myoepithelial carcinoma or malignant myoepithelioma will present infiltrative foci supportive of their malignant nature. The differential diagnosis and clues to make the distinctions are summarized in Table 13.2.