Because of the overlap in cytologic features, the definitive diagnosis and subclassification of salivary gland lymphoma on cytology alone is frequently challenging. Cytologic evaluation of fine needle aspiration (FNA) commonly is accompanied by immunophenotyping by flow cytometry or immunohistochemistry of a cell block.

Hodgkin lymphoma, formerly known as Hodgkin disease, has been described first by Thomas Hodgkin in 1832. The controversy over the origin of this lymphoma lasted more than a century and led to the original designation as Hodgkin disease or lymphogranulomatosis. With the demonstration of the B-cell origin of this neoplasm, the term Hodgkin lymphoma has been introduced. The World Health Organization (WHO) classification of lymphoid and hematopoietic tumors divides Hodgkin lymphoma into two categories—nodular lymphocyte-predominant Hodgkin lymphoma and classical Hodgkin lymphoma (cHL). Nodular lymphocyte-predominant Hodgkin lymphoma consists of lymphocytic/histiocytic or “popcorn” cells scattered within nodules of reactive lymphocytes. It rarely involves extranodal sites and thus is not discussed in this chapter in detail. cHL is characterized by the presence of Reed-Sternberg (RS) cells in a rich reactive inflammatory background. The cHL is observed most frequently in lymph nodes and other lymphoid organs such as the spleen and liver. It occasionally presents in extranodal sites, especially in immunodeficient individuals. The cHL is divided into the following histologic subtypes: nodular sclerosis, mixed cellularity, lymphocyte-rich, and lymphocyte-depleted.

Classical Hodgkin lymphoma presents most frequently in lymph nodes and can involve related lymphoid organs such as the spleen and liver. Cervical lymphadenoapthy is most common followed by mediastinal, axillary, or paraaortic lymph node involvement. Bone marrow is involved in 5% of cases. Primary extranodal site cHL is rare in immunocompetent individuals and is more frequent in the immunodeficient population. Rare reports of salivary gland involvement have been published in the literature. B symptoms including fever, weight loss, and night sweats are common in cHL.

Fine needle aspirations of cHL can be variably cellular depending on the histologic subtype of the lesion. The lymphocyte-rich and mixed cellularity types usually yield a richly cellular sample with most cells being small lymphocytes admixed with rare neoplastic cells. The nodular sclerosis cHL may be difficult to aspirate because of extensive fibrosis. The aspirate can contain fibroblasts and metachromatic fibrillar material derived from collagenous bands characteristic of nodular sclerosis cHL.

Regardless of the histologic subtype, the pathognomonic findings are the presence of RS cells in a reactive inflammatory background comprising small lymphocytes, plasma cells, histiocytes, and eosinophils (Figure 16.1a and b, Table 16.1). Granulomatous reaction and necrotic foci can be present. The RS cells are required for the diagnosis and are present in each histologic subtype of cHL. The typical RS cell is a large lymphoid cell, of an average size of 40–70 μm, with a bilobed nucleus or two nuclei with prominent centrally located inclusion-like nucleolus and abundant cytoplasm (Figure 16.1c). The appearance of the nuclei sometimes is compared with the image of an owl’s eyes. In Papanicolaou stain, the characteristic nucleoli of RS cells stain bright red. The cytoplasm is abundant and stains usually blue-green in Papanicolaou and basophilic in Diff-Quik stain. The variants of RS cells such as mononuclear Hodgkin cells, lacunar cells, and mummified cells are observed frequently; however, they are not sufficient for the diagnosis of cHL (Figure 16.1d). Mononuclear Hodgkin cells are large lymphoid cells with a single nucleus, distinct nucleolus, and abundant cytoplasm. Lacunar cells are appreciated best in the histologic sections (needle biopsies or cell blocks). They may be mononuclear with oval or multilobated nuclei, or multinucleated, and show cytoplasm retraction in formalin fixed tissue. Mummified cells have pyknotic nuclei and condensed cytoplasm. Nucleoli are difficult to appreciate. Because select non-Hodgkin lymphomas closely can resemble cHL cytologically, immunohistochemical stains, described in the following paragraphs, are required for a definitive diagnosis. 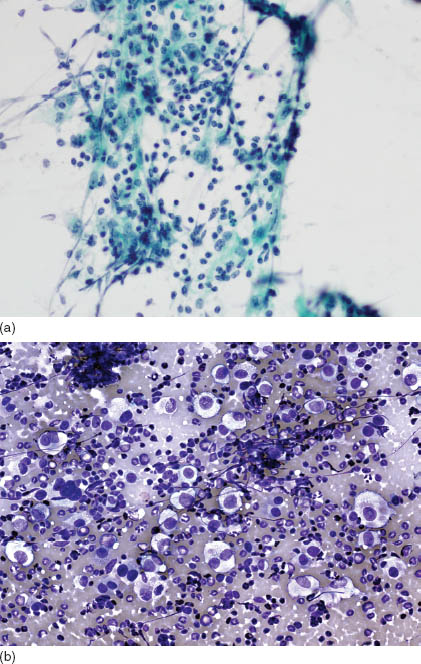 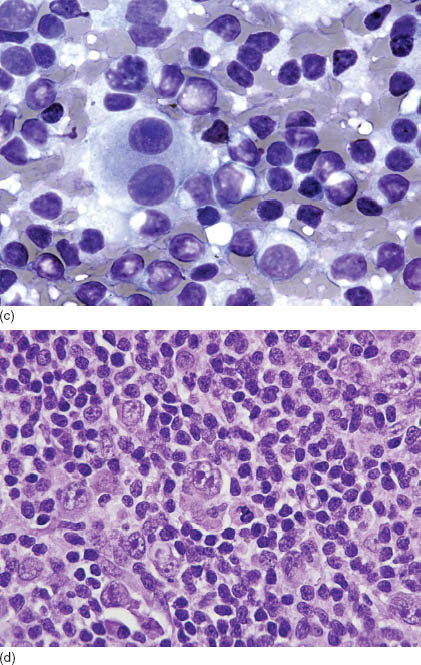 Histologic features of cHL are dependent on the subtype. Briefly, nodular sclerosis cHL, the most common type accounting for approximately 70% of cHL cases, shows broad collagen bands transsecting the lymph node and thickening of the nodal capsule. Lacunar cells frequently are present in this type of cHL. The background cellularity includes small lymphocytes, eosinophils, and histiocytes. In mixed cellularity cHL, fibrotic bands and capsular thickening are absent, and RS cells are scattered among the diffuse background proliferation of small lymphocytes, histiocytes, eosinophils, neutrophils, and plasma cells. Lymphocyte-rich type shows a vaguely nodular background of small lymphocytes with scattered RS cells. The RS cells and variants are most frequent in lymphocyte-depleted cHL, which is characterized by a paucity of a reactive background.

The demonstration of RS cells positive for CD30 and CD15 and negative for CD45 and T-cell markers is essential for the diagnosis. Immunohistochemical stain for the CD20 antigen can be weakly positive in a proportion of RS cells; however, at the time of primary diagnosis, staining is typically heterogeneous and not as intense as in cases of non-Hodgkin B-cell lymphomas. Relapsed cHL with strong CD20 immunoreactivity has been reported. The cellular composition of background lymphoid cells is variable and dependent on the subtype of cHL. In most cases, CD4-positive T cells predominate. In lymphocyte-rich cHL, RS cells are embedded in remnants of mantle zones and follicles, comprising mainly B-cells; thus, immunophenotyping shows a more prominent B-cell background. Immunophenotype of RS cells is demonstrated best by immunohistochemistry of a cell block.

Close attention is essential to both the cytology of neoplastic cells and to the reactive background. A host of other lymphoid malignancies and select reactive conditions closely can resemble cHL (Table 16.2). The most common reactive conditions, which cytologically can mimick cHL, are infectious mononucleosis and other reactive lymphoid proliferations containing immunoblasts, which occasionally resemble RS and Hodgkin cells. Reactive immunoblastic proliferations most commonly are associated with viral infections and autoimmune conditions. They typically show a continuum of cell cytology from small lymphocytes, through medium-sized lymphoid cells, and to large transformed lymphocytes. The latter may be bi- or multinucleated and feature large distinct nucleoli. In contrast, in cHL, one usually appreciates isolated RS and Hodgkin cells in an inflammatory background that may include small lymphoid cells, plasma cells, granulocytes, plasma cells, and histiocytes. The intermediate size lymphoid cells and cytologic continuum is not present. Granulomatous foci with epithelioid histiocytes also can be present in cases of cHL; thus, fine needle aspirations of any lesion with granulomatous inflammation have to be scrutinized closely for the presence of RS cells to exclude cHL.

The neoplasm most closely resembling cHL on cytologic examination is T cell/histiocyte-rich large B-cell lymphoma (THRLBCL), a subtype of diffuse large B-cell lymphoma (DLBCL). In this entity, rare neoplastic B cells are scattered in the reactive background comprising small lymphocytes with a variable admixture of histiocytes. Malignant cells can be pleomorphic and mimic RS and Hodgkin cells. However, T-cell/histiocyte-rich large B-cell lymphoma rarely involves tissues outside of the lymphoid system or bone marrow and, based on the site of involvement, rarely will enter the differential diagnosis in lesions of salivary glands.

Finally, when numerous and clustering of RS and Hodgkin cells are encountered in FNA of a syncytial variant of nodular sclerosis cHL, a differential diagnosis includes poorly differentiated carcinoma, sarcoma, and melanoma.

The cHL is treated with combination chemotherapy and/or radiation. The choice of treatment modality is based on the stage of the disease. More than 85% of patients are cured with this approach. Staging and laboratory features are used for prognostication. The best outcome occurs in patients with lymphocyte-rich and nodular sclerosis cHL, and the worst survival has been reported for the lymphocyte-depleted type.

MALT lymphoma develops from postgerminal center memory B-cells, most frequently in patients with an autoimmune disease such as Sjogren syndrome, and is preceded by an acquisition of prominent mucosa-associated lymphoid tissue. The neoplastic population of MALT lymphoma is heterogeneous and includes small- and medium-sized lymphocytes, plasma cells, and occasional large lymphoid cells. The cytologic features overlap to a large extent with myoepithelial/lymphoepithelial sialadenitis (benign lymphoepithelial lesion), which makes cytologic diagnosis of MALT lymphoma one of the most challenging in salivary gland pathology.

MALT lymphoma of salivary glands is the most frequent subtype of malignant lymphoma developing at this site. Parotid glands predominantly are involved. MALT lymphoma frequently presents with diffuse symmetric bilateral enlargement of salivary glands. Adults are affected most commonly, and there is a significant female predominance. Most patients have a prior history of autoimmune disease, predominantly Sjogren syndrome. This patient group have a 44-fold increased risk of developing lymphoma, which can be preceded by a benign lymphoepithelial lesion. The clinical course is usually indolent, and lymphoma remains confined to salivary glands. Rarely, patients develop disseminated disease and/or transformation to diffuse large B-cell lymphoma. Paraproteinemia may be present.