As mentioned in Chapter 1, the recent World Health Organization (WHO) classification includes a large list of tumors that are basically very rare. Cytological recognition and appropriate classification based solely on the grounds of aspiration smears is difficult. An easier task is determining a categorical diagnosis or differential diagnosis. In many of these cases, the final diagnosis will be made on histological evaluation after surgical excision. Metastasis to salivary glands is also rare but can occur and pose diagnostic challenges. The first part of this chapter will cover metastatic tumors, and the second portion will include a brief description of each of these rare primary tumors. Most reports in cytologic and fine needle aspiration literature about these entities are in the form of case reports.

Salivary glands are an unusual site for metastases. However, the glands and its associated lymph nodes sometimes can be involved with metastatic tumors and consequently pose diagnostic challenges specifically to answer the question of primary versus metastasis. Metastases to salivary glands comprise approximately 5% of all malignant tumors of salivary glands, and they are more frequent in the parotid gland. If a history of malignancy is known, then the task is usually easier, and the best approach is to compare the morphological appearance of both neoplasms. However, if the patient presents with salivary gland malignancy that could be secondary with no prior known history, then the pathologist task is harder and finding the primary site needs thorough clinical and radiological work up. In these circumstances, taking a short screening history and a head and neck examination during the fine needle aspiration (FNA) procedure may unveil a potential source. Carcinoma and melanoma in and around the head and neck region may be found. The most common sources of metastasis to salivary glands are head and neck carcinoma, mostly squamous cell carcinoma (Figure 17.1a–c) followed by melanoma (Figure 17.2a–e). The parotid gland is the most common gland involved, and most commonly, the primary site is in the head and neck region. However, the source of metastasis to the submandibular glands is more frequently from distant sites. Any organ can send metastasis to a salivary gland, but lung (predominantly small cell carcinoma), kidney, and breast are among the most common. In rare occasions, the primary site may not be identified. Metastases are thought to occur primarily through lymphatic spread and to a lesser extent occur by direct extension or hematogenous spread. It is believed that up to 75% of parotid metastases may represent a secondary tumor to an intraparotid lymph node from nearby malignancy. 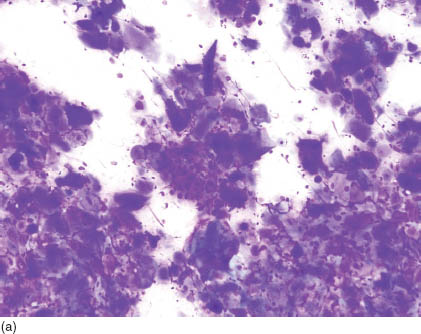 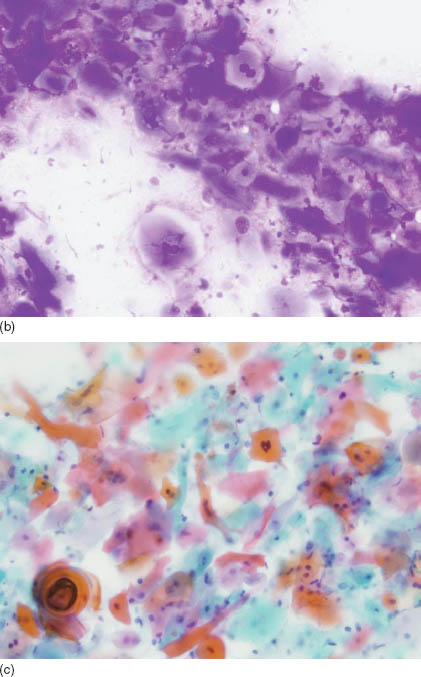 FIGURE 17.2. (a) A photomicrograph of a pigmented lesion on the left temple, the primary source of metastatic melanoma to the left parotid gland. The lesion was found immediately at the time of fine needle aspiration after evaluating the first pass that showed potential metastatic melanoma. (b) Smears from the parotid showing multiple medium size cells with an ovoid nucleus, some of which contain pigmented cytoplasm. While evaluating this smear and assuming a potential melanoma diagnosis, both the pathologist and the otolaryngologist examined the surrounding skin where a pigmented lesion was found just above the temple area (Diff Quik, 400×). (c) Smears from the previous case showing a predominance of single cells, some of which have pigmented cytoplasm, and ovoid-to-round nuclei with prominent nucleoli (Papanicolaou, 600×). (d) The cell block showed unremarkable salivary gland tissue surrounded by the malignant cells. Immunohistochemical stains on the cell block confirmed the diagnosis of melanoma (hematoxylin and eosin, 400×). (e) The tumor cells are immunoreactive for HMB-45 surrounding the negative unremarkable salivary gland tissue (HMB-45 immunostain on cell block, 200×). 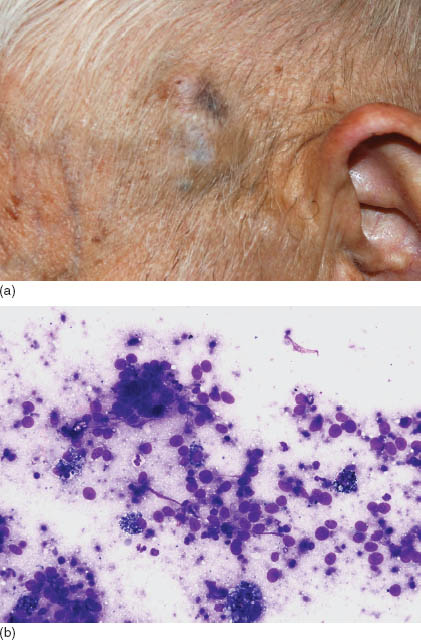 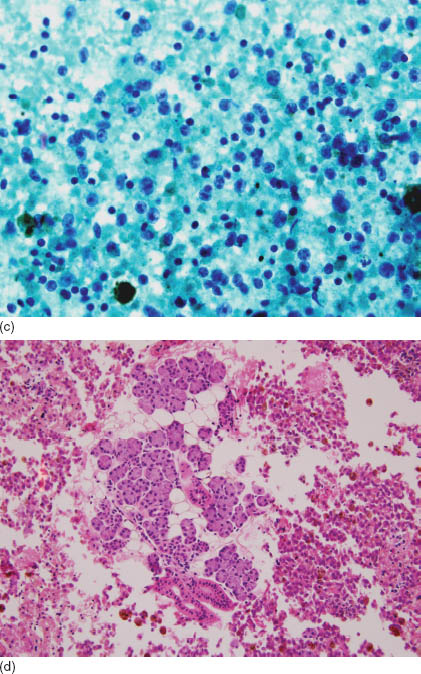 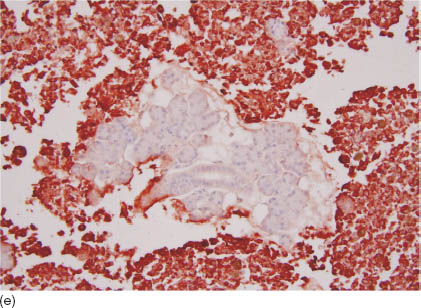 Despite the fact that this neoplasm can be categorized as a pleomorphic or a monomorphic adenoma variant (epithelial-rich pleomorphic adenoma), many investigators believe that it deserves to be dealt with as a separate entity because it has unique clinicopathological features. This tumor involves the upper lip in most cases with few cases affecting the buccal mucosa. It rarely involves major salivary glands. Clinically, the peak incidence is in the seventh decade, and it affects females more than males. Although most cases are solitary, some cases can be multiple. Making the specific diagnosis of “canalicular adenoma” by fine needle aspiration is not easy. However, the smears are usually cellular and show benign-appearing cuboidal and columnar epithelium in cords. Cords comprising biepithelial cell layers (canaliculi) are characteristic (Figures 17.3a and b). In addition, thin stroma can be intermixed that sometimes can show globules reminiscent of adenoid cystic carcinoma globules (Figures 17.3c and d). However, these stromal globules are thin and not as darkly metachromatic as their adenoid cystic carcinoma counterparts. In addition, no cellular or nuclear atypia are present. The histological features are characteristic; the tumor is well circumscribed and sometimes encapsulated. Sections show cords of benign columnar and cuboidal epithelial cells in double layers with thin and slightly vascular stroma (Figure 17.3e). The stroma is not fibrillary and no myoepithelial cells are present; both are features that separate canalicular adenoma from classic pleomorphic adenoma. 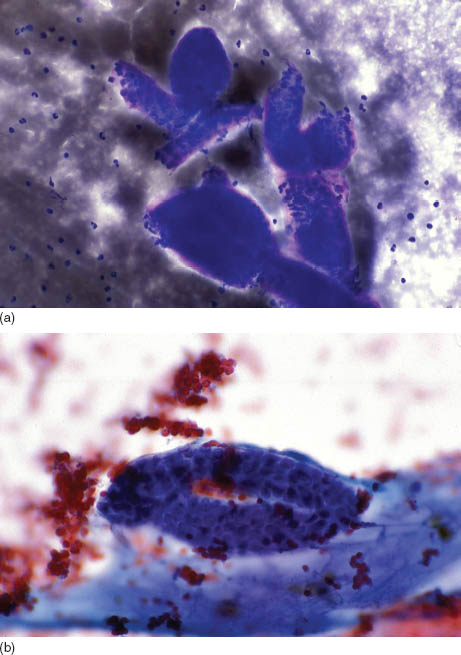 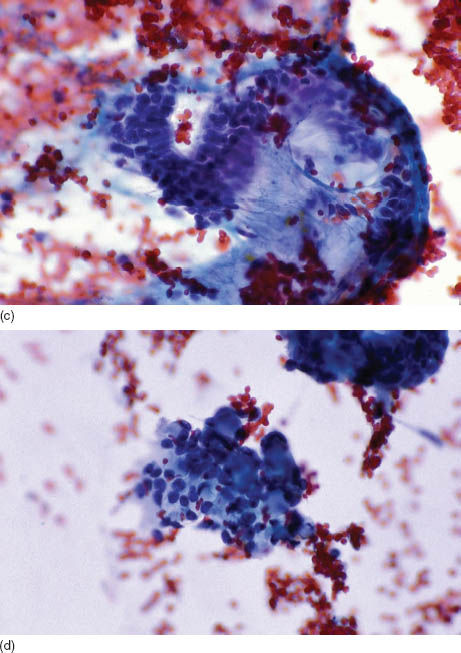 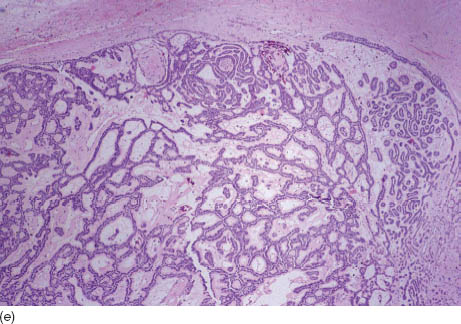 These rare tumors are characterized by a predominant cystic growth by imaging (Figure 17.4a), gross examination, and a predominant bland papillary morphology on cytological smears. Cystadenocarcinoma (also known as nonepidermoid mucous-producing adenopapillary carcinoma, malignant papillary cystadenoma, and low-grade papillary adenocarcinoma of the palate) is the malignant counterpart of cystadenoma. The cyst lining is epithelial and adenomatous ranging from intestinal-type epithelium to clear and occasional bland cuboidal. The only way to differentiate carcinoma from adenoma is with histological evidence of invasion either into the surrounding normal salivary gland epithelium or into the surrounding structures. Therefore, FNA smears of both will show similar features. Aspirate smears are moderately cellular and consist of papillary glandular clusters (Figure 17.4b) without the squamous or intermediate cells that characterize mucoepidermoid carcinoma. Occasional mucinous cells can be found, and in general, the nuclear morphology is bland (Figure 17.4c). The histological sections are multicystic and contain papillary structures lined by cuboidal or columnar cells (Figures 17.4d and e). Cystadenoma is benign and is cured by complete surgical excision, whereas cystadenocarcinoma is a slow-growing, low-grade adenocarcinoma treated by a wide local excision of the involved gland. Metastasis and mortality from this carcinoma is unusual. Another entity that sometimes overlaps with these neoplasms is low-grade cribriform cystadenocarcinoma (also known as low-grade salivary duct carcinoma). This rare tumor resembles atypical ductal hyperplasia of the breast, and FNA smears may resemble those of cystadenocarcinoma and cystadenoma.