Adenoid cystic carcinoma (ACC) is a rare, slow-growing, but relentless malignant neoplasm comprising 3–5% of all salivary gland tumors. It is the most common primary malignancy of all salivary glands except the parotid. It is made up of small bland cells (basaloid epithelial cells and myoepithelial cells) forming variable growth patterns, most commonly a classic cribriform pattern containing hyaline globules. Growth along and invasion of nerves is characteristic.

ACC occurs mostly in adults in the fourth and fifth decades, although it can occur at any age. It is more common in women than in men with a ratio of approximately 3:2. There has been considerable variability of its incidence among various studies and in different geographic areas. According to the Armed Forces Institute of Pathology (AFIP) and other reports, its incidence is exceeded only by that of mucoepidermoid carcinoma. Its relative incidence is 10% of all salivary gland carcinomas and probably has decreased slightly in recent years because of the emergence of new entities and because of reclassification of salivary gland tumors. It accounts for approximately 4.4% of all major salivary glands tumors and only 1.2% of all parotid tumors. About 25% of ACC involve the major salivary glands (in particular, the submandibular gland), and 75% involve minor salivary glands (especially those in the palate). Interestingly, this tumor also is known to involve other organs such as the trachea, breast, lung, lacrimal and sweat glands, and others.

Clinically, more than half of the patients initially present with an asymptomatic painless firm mass that is indistinguishable from other benign or malignant salivary gland tumors. Later, the tumor usually causes tenderness, pain, and facial nerve paralysis. The pain and paralysis from perineural invasion actually may help in making an early diagnosis. The tumor seems fixed to underlying tissue because of marked tumor infiltration in the skin, mucosa, and surrounding structures. Those involving the oral cavity commonly show mucosal ulceration over the mass. Despite its slow growth, it has a poor prognosis because of its relentless long-term growth and difficulty of complete surgical resection resulting from wide infiltration around nerves and surrounding structures. ACC is known to have late metastasis to the lung and bone, and it frequently involves adjacent lymph nodes by direct extension rather than true metastasis. True metastasis to distant lymph nodes is rare.

Typically, the aspirated material in ACC has a mucoid or glistening appearance that may be similar to that of pleomorphic adenoma (PA). The aspirate is usually moderately cellular and shows unique cytologic features with glands, microcysts, cords, and well-outlined solid clusters, and a few singly dispersed cells. The cells are small and deceptively banal appearing. Mitoses are rare. The most characteristic feature is clusters of small, uniform round–oval cells surrounding central cores of homogenous material resembling cribriform structures (Figures 11.1 and 11.2). The homogenous globules may be obscured by the thick cell clusters and require adjusting the microscopic focus. The quantitative relationship of the epithelial component and the acellular material varies widely between tumors. Sometimes, cords of the mucoid haylinized material have adherent rows of uniform small cells, a feature that is unique to adenoid cystic carcinoma and helps distinguish this tumor from other primary salivary gland tumors. 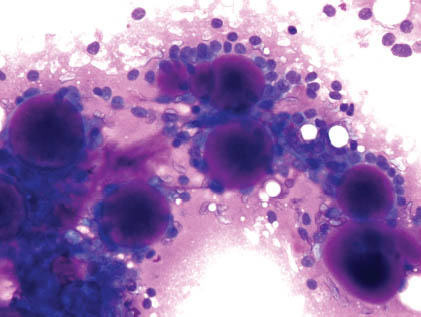 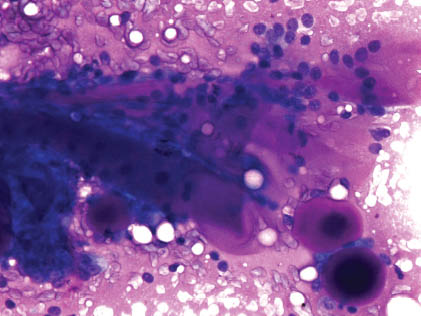 The epithelial cells appear as tightly packed, basaloid, small, round to oval, and uniform. The cytoplasm is scant pale, and the nuclear/cytoplasmic (N/C) ratio is high. Their nuclei are small, round–oval, bland, and hyperchromatic with a smooth membrane and small conspicuous nucleoli.

The myoepithelial cells produce the mucoid substance, which stains metachromatic magenta on Diff-Quik stain and stains pale translucent on hematoxylin and eosin or Papanicolaou stains. This substance is similar to the myxoid material observed on smears of PA that also is produced by myoepithelial cells. However, although the substance is homogenous, glassy, or hyaline in ACC, it appears as myxofibrillary and irregular in PA (Figures 11.3 and 11.4). 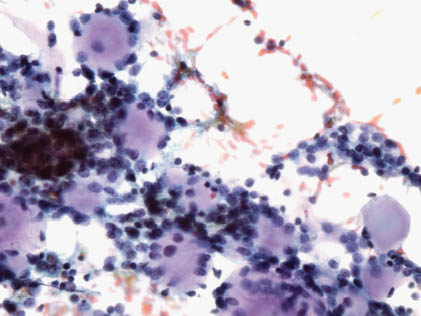 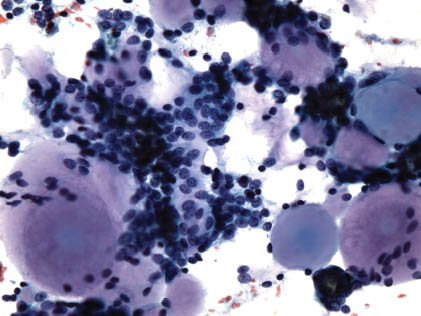 Hyaline globules are the most characteristic feature of ACC. They appear as round casts, balls, or cylinders of acellular homogenous mucoid material or as branching fronds and columns with rounded contours. They may be surrounded by a layer of small cells (Table 11.1). Cell block sections can be very helpful in showing microfragments with the classic cribriform pattern (Figure 11.5). Rarely, fine needle aspiration biopsy (FNAB) of ACC may lack hyaline globules (as in the solid variant). In general, in aspirates of ACC, as the amount of hyaline globules decreases, the cellularity, single cells, and cytologic atypia increases. When hyaline globules are scant or absent, the differential with PA and monomorphic adenoma (basal cell adenoma) becomes very important and difficult to assess. However, hyaline globules are not necessary or sufficient for the diagnosis and are not specific of ACC. They can be observed in any tumor containing myoepithelial cells including mucin-producing adenocarcinoma, acinic cell carcinoma, PA, myoepithelioma, trabecular adenoma, intraductal papilloma, polymorphous low-grade carcinoma, and epithelial-myoepithelial carcinoma.

FIGURE 11.5. Adenoid cystic carcinoma. Cell block section with a classic cribriform structure having round microcysts filled with hyaline globules. The cells are uniform and relatively bland (hematoxylin and eosin, ×100). 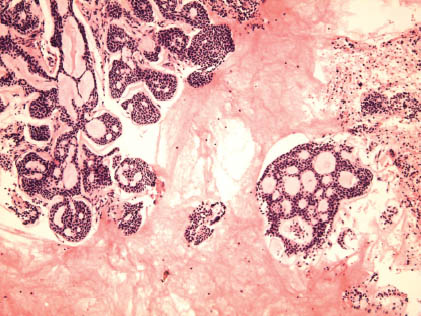 ACC have a spectrum of histomorphology and, therefore, can have variable cytomorphologic pictures on FNAB. In addition to the classic appearance already mentioned (small bland cells with hyaline globules), the FNAB of the solid variant will reveal discohesive groups of atypical cells with irregular nuclei and many singly dispersed cells. Hyaline globules are absent or scarce (Figures 11.6 and 11.7). Accurate classification of this clearly malignant tumor on FNAB will be difficult, and the differential will include tumors such as small cell carcinoma, poorly differentiated carcinoma, basal cell adenocarcinoma, basal/>