Imaging assessments of the temporomandibular joint graphically depict clinically suspected disorders of the jaw joints. It is radiographic examination and imaging that play an important role in the diagnosis and management of most temporomandibular joint (TMJ) disorders. Several techniques have been used for the examination of the TMJ, including conventional tomography, magnetic resonance imaging (MRI), arthrography, computed tomography (CT), and, recently, cone beam computed tomography (CBCT). CT and MRI allow for better appreciation of the soft tissues of the joints, which, in turn, allows a better understanding of anatomy and pathophysiology of internal derangements related to disc displacement.

The mandible and temporal bones comprise the osseous components of the temporomandibular joint. The head of the mandibular condyle comprises the inferior component of the joint and the temporal bone contributes the mandibular fossa (glenoid fossa) and articular tubercle, forming the superior osseous part of the joint (Figures 8.1–8.4). The articulating surfaces of the temporomandibular joints are covered by a thin layer of dense fibrous tissue, rather than the cartilaginous coverings found in most other joints of the body.

The temporomandibular joint disc is a biconcave (bow-tie shaped) fibrous structure located between the condylar head and the mandibular fossa of the temporal bone. The disc is round or oval in shape and has a thick periphery and thin dentral portion. Mediolaterally, the disc measures approximately 20 mm. In a normal joint, the posterior band is located over the condyle and the thinner central zone is located between the condyle and the posterior part of the articular tubercle. The anterior band is located under the articular tubercle. The entire joint is surrounded by a joint capsule emerging from the temporal bone and extending to attach to the neck of the condyle. Posteriorly, the disc is attached to the temporal bone and to the condyle by the posterior disc attachment. The posterior attachment is very important in internal derangements of the temporomandibular joint. The posterior attachment is also referred to as the bilaminar zone (from old histologic studies), or the retrodiscal tissue, and it consists of loose fibrous connective and elastic tissue components. Anteriorly, the disc attaches to the joint capsule and merges with the superior head of the lateral pterygoid muscle. 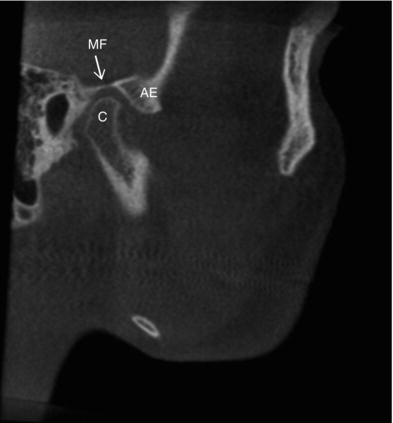 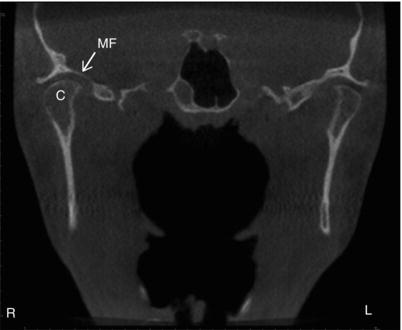 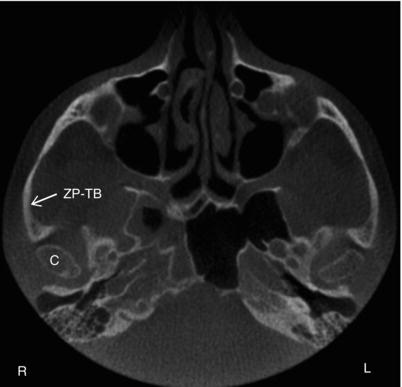 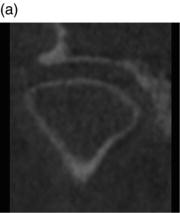 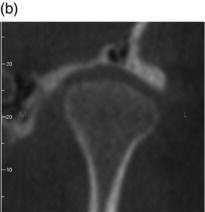 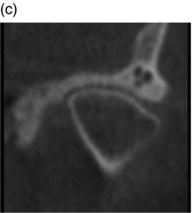 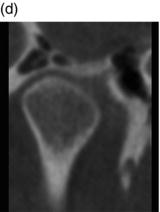 The craniomandibular articulation is complex because it involves two separate synovial joints, which function in unison within the same joint capsule. This allows for proportionally greater movement of the TMJ in relation to the actual physical size of the joint. The principal function of the disc is to permit relatively large movements within a small joint while maintaining stability. Rotation and translation occur in both the superior and inferior joint spaces, however, rotation is more evident in the inferior joint space while translation is predominant in the superior joint space. After the initial rotation, translation occurs in the superior and subsequently in the inferior joint space. During translation, the condyle and the disc translate together under the articular tubercle. All during mandibular movement, the thin central portion of the disc is located between the condylar head and the articular tubercle suggesting that the thicker periphery of the disc and the thick posterior and anterior bands act as functional guide for joint movement.

A fibrous capsule defines the anatomical and functional boundaries of the joint. Medially and laterally, the capsule is firm, which contributes to its stabilization during movement. The medial capsule is not as strong as the lateral capsule, which is reinforced by the temporomandibular ligament laterally. Anteriorly and posteriorly, the capsule is loose enough to allow for mandibular movement. The temporomandibular joint is supported by two accessory ligaments to protect the joint during wide excursive movements.

The capsule consists of two layers, an outer fibrous layer and an inner layer of synovial tissue. The synovial layer produces synovial fluid with a function that serves three purposes: to reduce friction between articular surfaces by serving as a lubricant, to provide nutrition to the nonvascularized tissues of the articulating surfaces and the disc, and to remove debris from the joint spaces. There is only enough synovial fluid to outline the joint surfaces. If larger amounts of joint fluid are present, it is an indication of joint pathology.

The joint has an intracapsular disc that divides the synovial cavity into noncommunicating upper and lower compartments. The disc consists of dense collagenous tissue without innervations or vascularization. In the child and adolescent, the disc is composed of dense collagenous fibers; in the elderly person it is fibrocartilage. In the newborn, the entire disc is of equal thickness. This changes as the TMJ begins to function. With function, the disc adapts to the configurations of the opposing surfaces resulting in its final biconcave “bow tie” appearance. The posterior and anterior thick parts are called posterior and anterior bands. The undersurface of the disc and the superior aspect of the condylar head fit perfectly together during all jaw movements.

The disc attaches firmly to the condyle medially and laterally so is able to move only slightly in the mediolateral direction. Posteriorly, the disc is continuous with the posterior disc attachments (the retrodiscal pad), which consists of loose connective tissue with large elastic fibers and fat. It is highly vascular and well innervated in addition to being outlined by synovial membrane. The posterior attachments can easily become compressed and, because of its structure, it is unfit for articulation, which may occur when the disc is displaced. If the undersurface of the posterior discal attachment is damaged, the disc can translate to a position anterior to the condyle, resulting in an anterior disc displacement.

During jaw movement, the condyle rotates smoothly against the central underside of the disc. The disc and condyle move as an integrated complex in the healthy joint. It is magnetic resonance imaging (MRI) that enables the depiction of both soft and hard tissues of the joint and provides us with visualization of the relationship of the hard and soft tissues.

Based on their etiology and time of appearance, developmental conditions can be classified as congenital malformations with associated growth disorders and as primary growth disorders. Hemifacial microsomia, condylar aplasia, condylar hypoplasia, or condylar hyperplasia are the most common craniofacial malformations. Facial asymmetry is the most prevalent clinical sign of developmental conditions in the TMJ region. CBCT and 3D CBCT provide diagnostic information about the size, shape, and accurate position of the mandibular condyle. They also provide information about morphology, inclination, displacement, or deviation of the lateral and medial surfaces of the mandibular rami and body.

Hemifacial microsomia is the second most common facial birth defect after cleft palate/lip occurring in approximately 1 in 5000 live births with variable frequencies reported. It occurs more frequently in males than females. It is the most frequent syndrome from first and second branchial arches. It may not be appreciable in infancy and is usually evident by the age of 4 years. Characteristic clinical findings include facial asymmetry and ear anomalies. The right-side facial underdevelopment is more frequent than left-side underdevelopment. Skin tags between ear and corner of mouth occur. Seventh cranial nerve palsy is frequent. Other findings include dental malocclusion, hypodontia, and plagiocephaly in 10%. Bifacial microsomia has been reported.

Condylar aplasia is the absence of one or both condyles.

Condylar hypoplasia is an undersized condyle with normal morphology. It may be congenital, developmental, or acquired. Some examples include: micrognathia, Treacher Collins syndrome, secondary effects of radiation, or the result of infection. It generally presents with an underdeveloped ramus and body of the mandible on the same side creating asymmetry of mandible. Degenerative joint disease (DJD) or osteoarthrosis is a long-term sequela (Figures 8.5 and 8.6).

Juvenile rheumatoid arthritis presents with problems in other joints or the result of Rh factor incompatibility. Another differential includes severe DJD; however, this is found in an older-aged individual. 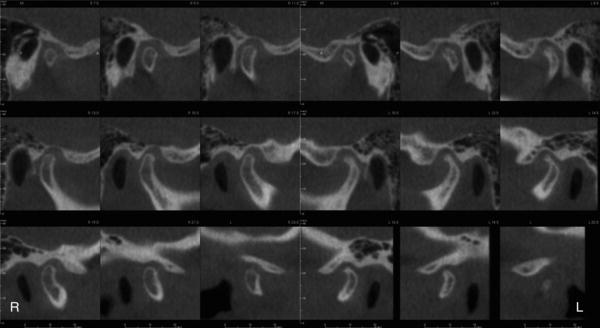 Condylar hyperplasia is the enlargement and occasional deformity of the mandibular condyle. There is an increase in cortical thickness with maintenance of a normal trabecular pattern. This is most commonly seen in young males with a mean age of 20 years. It presents as hyperplasia of the ipsilateral mandible in the same side as the condylar hyperplasia and mandibular asymmetry. It is generally self-limiting and ends at approximately the same time as cessation of skeletal growth. (Figures 8.7 and 8.8).

Juvenile arthrosis presenting with condylar hypoplasia: Initially the condyle presents within the range of normal and becomes abnormal during growth. It presents with secondary degenerative changes and is typically seen in females. A “toadstool appearance” with marked flattening and apparent elongation of the superior surface and posterior inclination of the mandibular condyle is frequently seen. The condylar neck is short or may be absent. There is flattening of the mandibular (glenoid) fossa and deepening of antegonial notch(s). 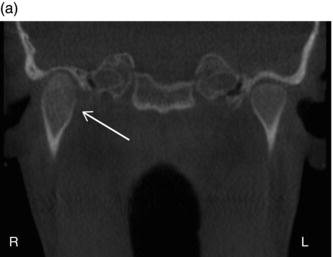 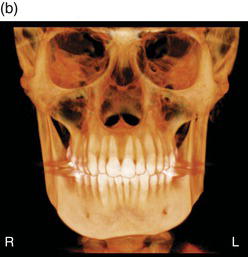 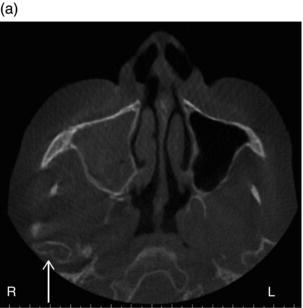 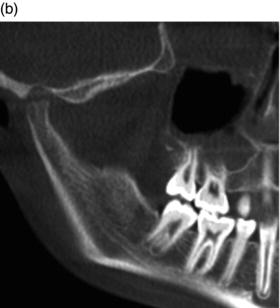