Introduction
The paranasal sinuses of the craniofacial complex are air-filled cavities, including the maxillary sinuses, the frontal sinuses, the sphenoid sinuses, and the ethmoid air cells. The paired maxillary sinuses are of particular significance to dentistry because of the proximity of these sinuses to dental structures, in particular, the roots of the maxillary teeth. The close association of the maxillary sinuses and dental structures produces a quandary for dentists when they consider possible differential diagnoses for disease processes, which could be of either odontogenic or sinus origin. Regardless of the etiology of a specific pathologic process, the disease may spread from the dentition to sinus or from the sinus to the dentition.
With the advent of cone beam multiplanar imaging in dentistry, it is possible to visualize all paranasal sinuses on images made for dental purposes. Therefore, the dentist should be acquainted with the appearance of normal sinuses and their comparative symmetry from side to side. It is through the appreciation and knowledge of normal-appearing structures that the dentist will recognize variants of normal as well as pathology.

The paranasal sinuses originate as evaginations from the nasal fossae into their respective bones (the maxillary bone, frontal bone, sphenoid bone, and ethmoid bone). They are lined by a mucosa that is similar to that found in the nasal cavity, which is a pseudostratified columnar ciliated epithelium containing both mucinous (goblet cells) and serous glands. Because the mucosa of the paranasal sinuses is attached directly to the bone, it is frequently referred to as mucoperiosteum. The mucoperiosteum of the sinuses is thinner than the nasal mucosa but is continuous with the nasal mucosa at the various sinus ostia (Figures 3.1–3.14; Table 3.1).

Figure 3.1. Coronal slice at the anterior opening of the nasal cavity showing the frontal sinuses (FS). 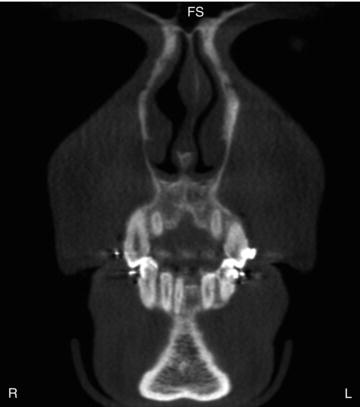 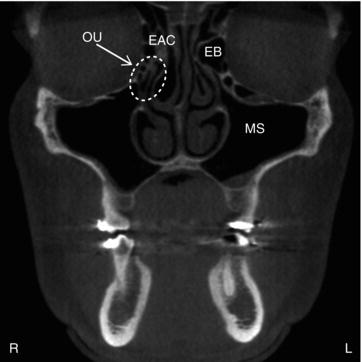 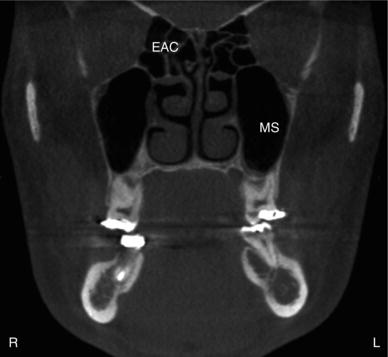 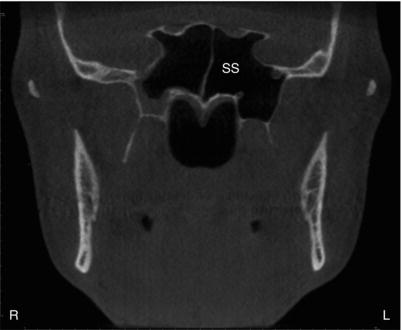 The functional reason for paranasal sinus presence has been discussed since the early descriptions of the sinuses in the 1800s. Proposed functions have included voice resonance, humidification and warmth of inspired air, increase in olfactory membrane area, absorption of shock to the face and head, thermal insulation for the brain, lightening of the skull and facial bones, and a contribution to facial growth. The current thought is that the paranasal sinuses form a collapsible framework, which helps to protect the brain from trauma.

Figure 3.5. Coronal slice at the condyles showing the posterior aspect of the sphenoid sinuses (SS). 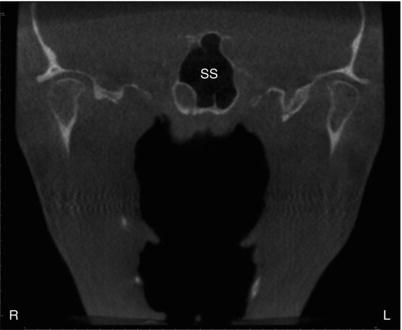 Figure 3.6. Coronal slice at the body of the cervical vertebrae showing the mastoid air cells (MAC). 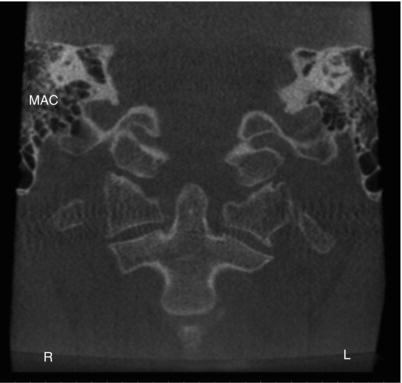 The maxillary sinus is the first of the paranasal sinuses to form and is visualized by the 17th day of gestation. After each nasal fossa and its turbinates are established, a small ridge develops just above the inferior turbinate, marking the future uncinate process. Shortly thereafter, an evagination above this ridge, the uncibullous groove, is seen, which then enlarges laterally from the nasal cavity. These early evaginations continue their growth laterally beneath the orbits through a process of pneumatization, which occurs concurrent to the growth of the maxilla and alveolar process. By birth, the rudimentary maxillary sinus appears like a small slit lying just lateral to the maxillary midline. The size of the neonate’s maxillary sinus is approximately 7 × 4 × 4 mm, or on average 6 to 8 cm, with the longest dimension being the anteroposterior axis.

Figure 3.7. Axial slice at the level of the midorbits showing the sphenoid sinuses (SS) and ethmoid air cells (EAC). 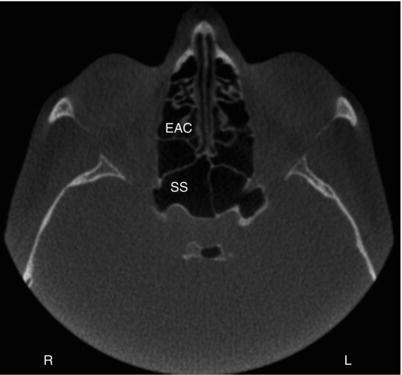 Figure 3.8. Axial slice at the level of the inferior aspect of the orbits and cranial skull base showing the sphenoid sinuses (SS), maxillary sinuses (MS), and mastoid air cells (MAC). 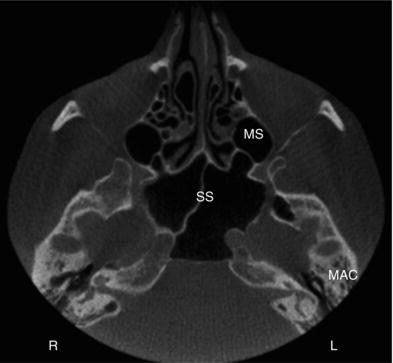 Figure 3.9. Axial slice at the level of the condyles showing the maxillary sinuses (MS), a pterygoid recess of the sphenoid sinus (PR-SS), and the mastoid air cells (MAC). 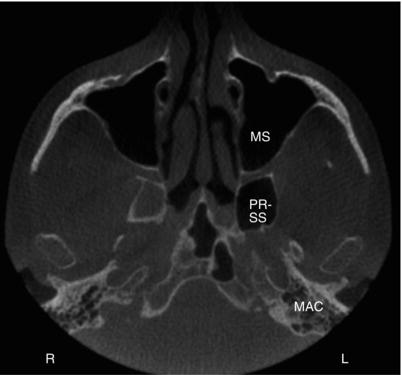 Figure 3.10. Axial slice at the level of the hard palate showing the maxillary sinuses (MS) and a small portion of the mastoid air cells (MAC). 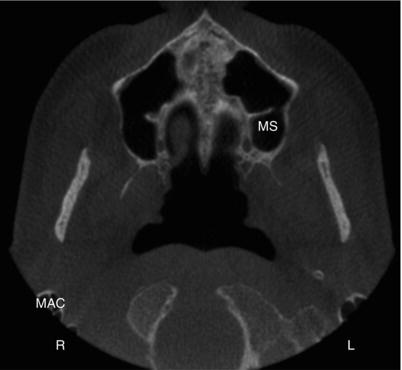 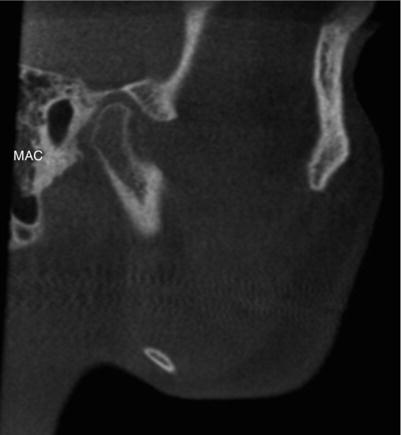 Figure 3.12. Sagittal slice at the maxillary teeth buccal roots showing the maxillary sinus (MS) and a pterygoid recess of the sphenoid sinus (PR-SS). 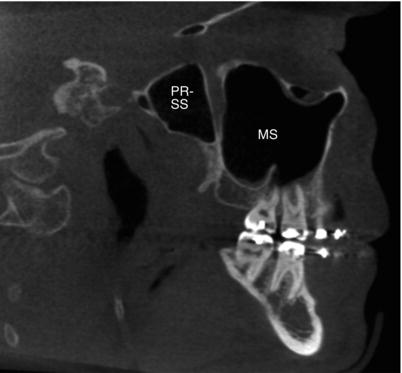 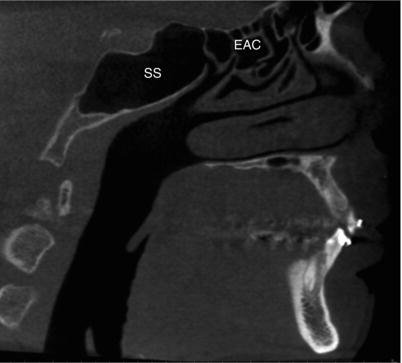 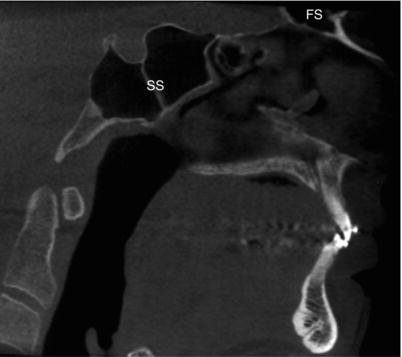 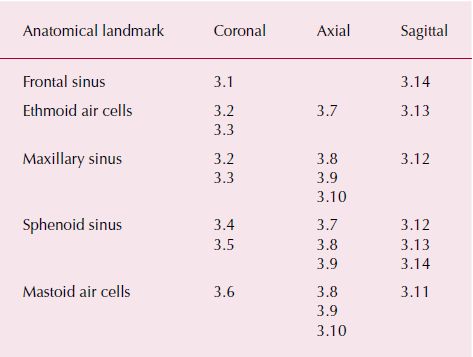 Generally speaking, the maxillary sinuses develop quite symmetrically and may continue to enlarge or pneumatize throughout life through the formation of air cells or cavities in tissues and adjacent bony structures. However, hypoplasia of the maxilla resulting from trauma, infection, surgical intervention, or irradiation to the developing maxilla can damage maxillary growth centers producing a small maxilla and a hypoplastic sinus. Hypoplastic sinuses are also seen in Treacher Collins syndrome, mandibulofacialdysostosis, and thalassemia major due to brachial arch anomalies when the demand for marrow prohibits sinus pneumatization.

Normal Anatomy of the Ostiomeatal Complex

Given the fact that sinusitis, or sinusoidal inflammatory disease, is a serious health problem affecting between 30 and 50 million people in the United States alone, it is obvious that correct interpretation of sinus imaging studies is of paramount importance. Thus, it is important to understand the anatomy of the ostiomeatal complex. The definition of the ostiomeatal complex is: The point in the middle meatus where the frontal and maxillary sinuses normally drain into the nasal cavity; obstruction here predisposes inflammation and infection of affected sinus cavities.

The ostiomeatal complex, known also as the ostiomeatal unit, consists of the lateral nasal wall and its adjacent structures (Figure 3.15). It is the lateral nasal wall that contains the structures known as the concha, which are divided into three levels: superior, middle, and inferior. Occasionally, there is a fourth level of concha called supreme, which is above the superior concha. The superior meatus drains the ethmoid air cells and the sphenoid sinuses via the sphenoethmoidal recess. The middle meatus receives drainage from the frontal sinus, the maxillary sinus, and the anterior ethmoid air cells. The recesses draining each of these three regions of the paranasal sinuses are as follows: 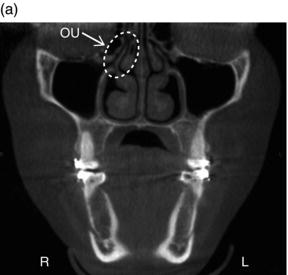 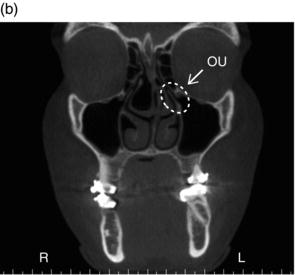 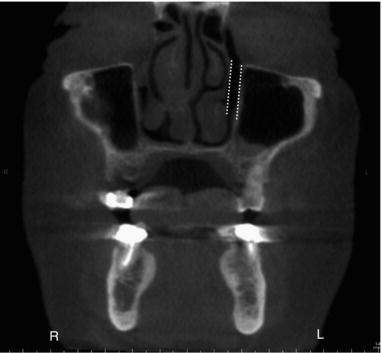 The nasolacrimal duct is drained via the inferior meatus (Figure 3.16).

Morphological evaluation in this region must focus upon the anatomy adjacent to these structures that contributes to constrictions in this region. It is the anatomical “tight spots” or constrictions that create drainage challenges contributing to sinusitis. If potential constrictions are considered by area, the first site encountered is in the anterior region surrounding the frontal recess, followed by the area surrounding the infundibulum and the middle meatus, and, finally, the most posteriorly situated region involving the sphenoethmoid recess. 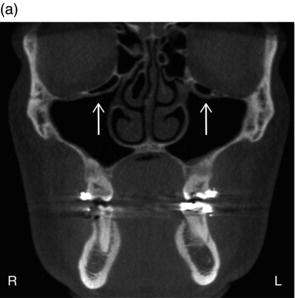 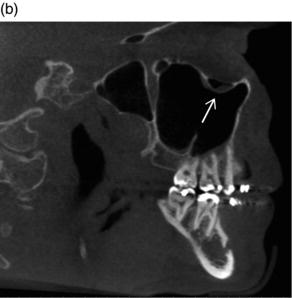 When observing sinus anatomy on medical CT or CBCT, one will quickly observe there is central septation dividing the right side from the left side. While this left/right division is the most obvious, it should be noted there may be several levels of septation and the floor of the frontal sinus slopes inferiorly toward the midline, an arrangement that is very complimentary to the frontal sinuses’ overall funnel shape.

There are several anatomical variations that may cause obstruction of the anterior ostiomeatal unit including deviation of the nasal septum, presence of infraorbital ethmoid cells (Haller cells; Figure 3.17), and variations in the size and shape of the ethmoid air bulla, middle turbinate, uncinate process, and frontal cells.

The ethmoid sinuses, also known as the ethmoid air cells, occupy the space between the frontal and sphenoidal sinuses. The paired ethmoidal cell groups bulge into the upper portion of the nasal fossa and have ostia, which drain into the adjacent middle and superior meatus. The ethmoidal sinuses are divided into groups of cells by bony basal lamellae that extend laterally to the laminae papyracea and superiorly to the fovea ethmoidalis. These lamellae serve as attachments for the turbinates. Thus, there are five lamellae, one for each of the primary turbinates (middle, superior, and supreme) and one for each of the secondary turbinates (bullae ethmoidalis and uncinate process).

The ethmoidal sinuses begin their formation in the third to fifth fetal months of life when numerous separate evaginations arise from the nasal cavity. The anterior cells are the first to form as evagination in the lateral nasal wall in the region of the middle meatus. Development of the posterior cells follow as evaginations in the superior meatal area. During the fifth prenatal month of life, the ethmoid air cells have expanded into the ethmoid bones and continue their expansion until puberty, or until the sinus walls reach a layer of compact bone, which halts enlargement. While the lamellae prevent one group of cells from intermingling with another, they do not prevent intramural expansion of one group into another. A concha bullosa results when posterior ethmoid cells extend intramurally to pneumatize the middle turbinate. This can result in a large obstructing turbinate or a focus of infection.

The frontal sinuses arise from one of several outgrowths originating in the region of the frontal recess of the nose or from anterior ethmoid cells of the infundibulum. While their site of origin can be identified on the mucosa as early as 3 to 4 months in utero, as compared to the maxillary and the ethmoid sinuses, the frontal sinuses are absent at birth with their delayed development starting after the second year of life. They reach the frontal bone around the fifth or sixth year of childhood. The frontal sinuses are essentially displaced anterior ethmoid cells, and because they develop from a variable site, their drainage will be either via an ostium into the frontal recess or via a nasofrontal duct into the anterior infundibulum.

Each frontal sinus develops separately on the right and left sides of the frontal bone and grows toward the midline. Often the larger sinus extends across the midsagittal plane and appears to be somewhat centered. The frontal sinuses are asymmetric in shape and their size is widely variable. In spite of the wide variability in frontal sinus size, the average frontal sinus has been described as between 28 mm high, 24 mm wide, and 20 mm deep. A direct relationship between the mechanical stresse/>