4 The Sinonasal Cavity and Airway

The Sinonasal Cavity and Airway

Introduction
This chapter will cover the sinonasal cavity and airway. It is common for allergies and infectious diseases to affect not only the paranasal sinuses but also the nasal cavities. Therefore, the nasal cavity is a partner with the paranasal sinuses in terms of frequency for imaging indications. In addition to allergies and infectious disease, facial fractures are common and may range from a broken nose to more complex fractures secondary to traumas. Also, there are disfiguring tumors of the sinonasal cavities that have poor prognoses and wreak facial carnage, thus contributing to their fearsome reputations.

Nose is the term generally used to describe the pyramid-shaped external soft tissue projecting ventral to the surface of the face. Nasal fossa, or nasal cavities, refer to the internal nasal airways.

Topographically, the nose is divided into subunits that have practical importance for reconstructive surgeons. The subunits consist of the nasal dorsum, the nasal sidewalls, the nasal tip and columella, the alar lobule, and the supraalar facets. The nasion is the junction of the root of the nose with the forehead. The lower or caudal free margin of the nose is formed by the alar rim, columella, and tip. Bilaterally, the lateral lower margin of the nose has a rounded expansile region referred to as the alar lobule and consists of skin and soft tissue posterior and inferior to the lateral crus of the lower lateral cartilage. The dorsum of the nose consists of the nasal bones’ dorsal surfaces superiorly and the dorsal border of the quadrangular cartilage attaching to the upper lateral cartilages inferomedially. The junction of the alae with the face is known as the alar-facial junction.

Som and Curtin (2003) describe the journey of inspired air as it enters the nasal cavity in the following manner:

Inspired air traverses the nasal valve. This is a circular area encompassed by the nasal septum, upper lateral cartilage, tip of the inferior turbinate, and floor of the nose. The total area encompassed by this valve provides the most important resistance to air flow in the nasal cavity. Of slightly lesser importance is the angle formed by the meeting of the quadrangular cartilage of the nasal septum and the inferior border of the upper lateral cartilages which is known as the nasal valve angle. Due to its mobile nature, it is a dynamic structure that narrows and widens with the phases of respiration. It is thus a critical factor in determining airflow through the nasal cavity.

The two sides of the nasal cavity are separated by the nasal septum. The septum supports the bony and cartilaginous vault and the tip of the nose. The main components of the nasal septum are the vomer, the perpendicular plate of the ethmoid, the quadrangular cartilage, the membranous septum, and the columella. The vomer may be bilaminar due to its embryologic origin; the vomer and the perpendicular plate of the ethmoid bone may become pneumatized.

The inferior concha is a separate bone of the skull. The inferior turbinate is larger than the other turbinates. The nasolacrimal duct drains tears into the inferior meatus. The superior and middle conchae are parts of the ethmoid bone. The middle meatus receives drainage from the frontal sinus (via the frontal recess) drains through the middle meatus, or infundibulum to middle meatus, to the nasal cavity to the nasopharynx. The maxillary sinus (via the maxillary ostium) drains through the infundibulum, the middle meatus, the nasal cavity, and, finally, the nasopharynx. The anterior ethmoid air cells drain via the anterior ethmoid ostia into the nasal cavity. In the ethmoid bone, the uncinate process is a curved lamina that projects downward and backward from this part of the labyrinth. It forms a small part of the medial wall of the maxillary sinus and articulates with the ethmoid process of the inferior nasal concha (Figures 4.1–4.10; Tables 4.1 and 4.2).

Normal Anatomy of the Ostiomeatal Complex 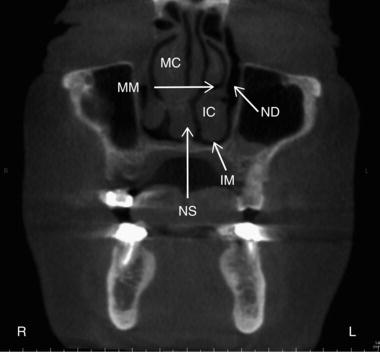 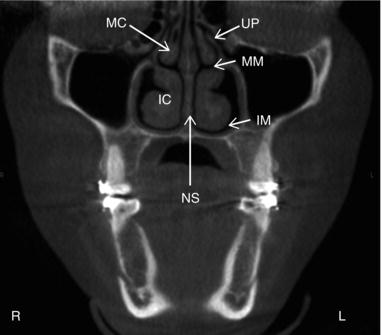 Anatomical Variations of the Nasal Septum

The nasal septum is fundamental to the development of the nose and paranasal sinuses. Deviations of the nasal septum are usually congenital but are due to previous experiences of trauma in some patients. Developmentally, there may be malalignment of the components of the nasal septum (the septal cartilage, perpendicular ethmoid bone, and vomer), which may cause deviation of the nasal septum, deformities of the tongue-in-groove relationship of the cartilage and vomer, or a septal bony spur. About one-third of septal deviations are asymptomatic, however more severe chondrovomer articulation problems may contribute to sinusitis symptoms. Obstruction, secondary inflammation, and infection of the middle meatus have been observed secondary to severe nasal septal deviations (Figures 4.11–4.12). 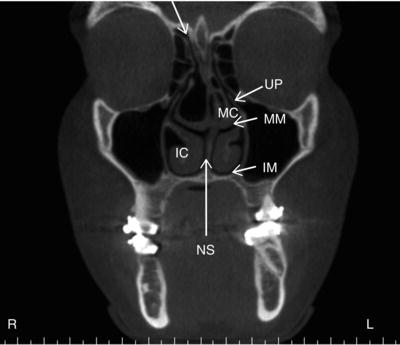 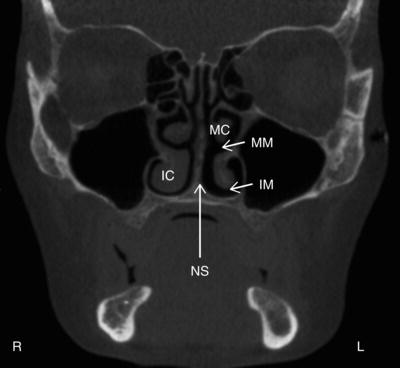 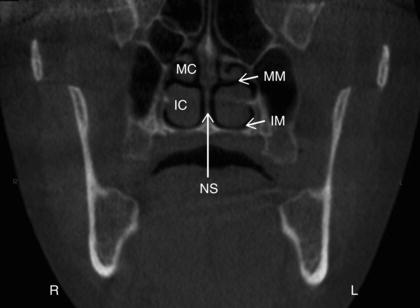 Figure 4.6. Axial slice at the level of the inferior aspect of the maxillary sinuses showing the inferior meatus (IM), inferior concha (IC), and nasal septum (NS). 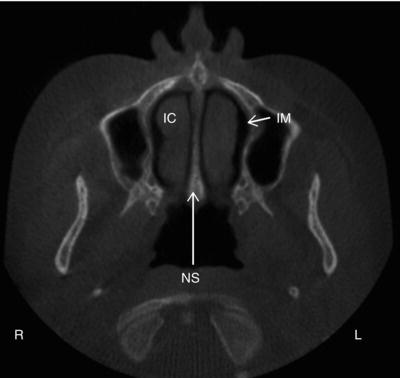 Figure 4.7. Axial slice at the midlevel of the maxillary sinuses showing the nasolacrimal duct (ND) and nasal septum (NS). 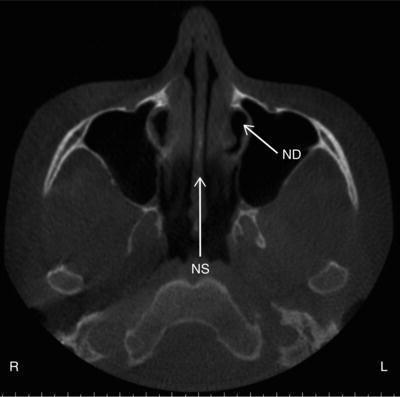 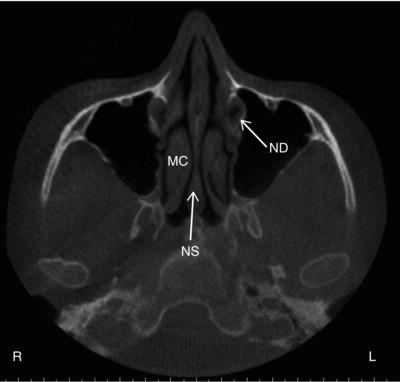 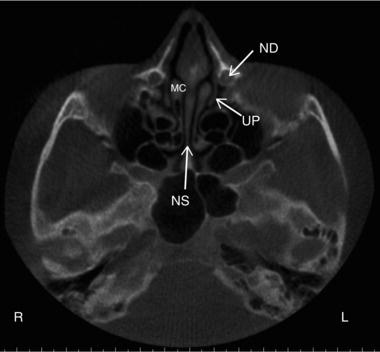 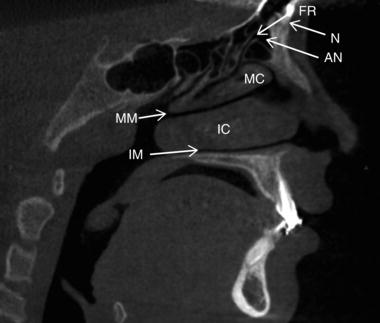 Anatomical Variations of the Middle Turbinate

There are several variations of the middle turbinate including paradoxic curvature, concha bullosa, lamellar concha, medial/lateral displacement, L-shaped lateral branding, and sagittal transverse clefts. The first three, which are more common, are described in detail below. 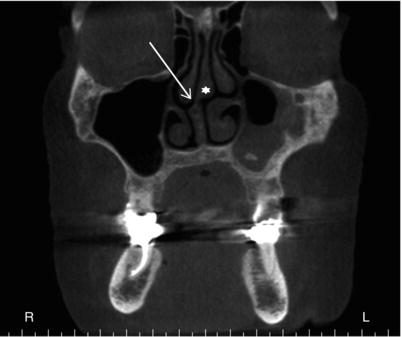 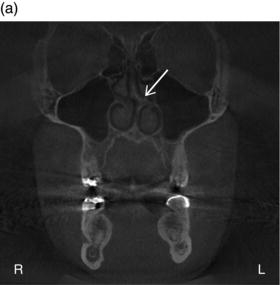 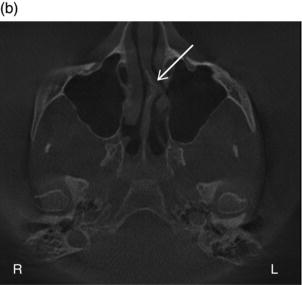 Normally the convexity of the middle turbinate is directed laterally, toward the lateral sinus wall. When paradoxically curved, the convexity is directed medially toward the nasal septum. The inferior edge of the middle turbinate may take on excessive curvature, which may then narrow or obstruct the nasal cavity, infundibulum, or middle meatus. Because of the potential narrowing and/or obstruction associated with paradoxic curvature, it is considered a contributing factor to sinusitis by authors Som and Curtin (2003) (Figure 4.13). 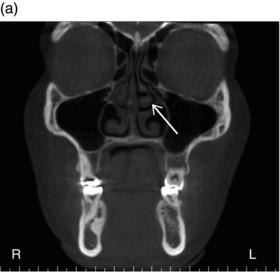 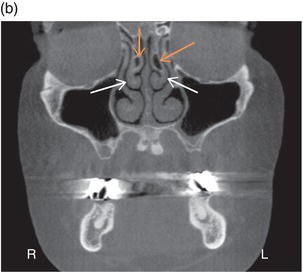 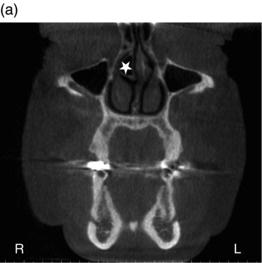 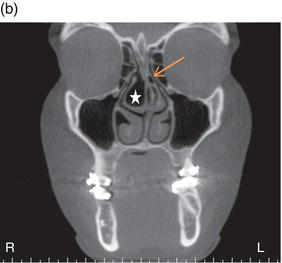 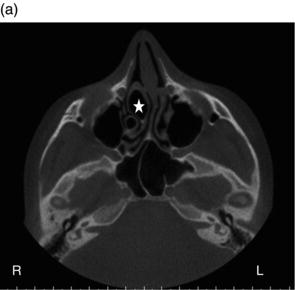 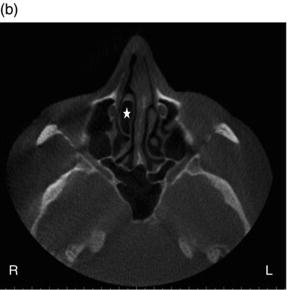 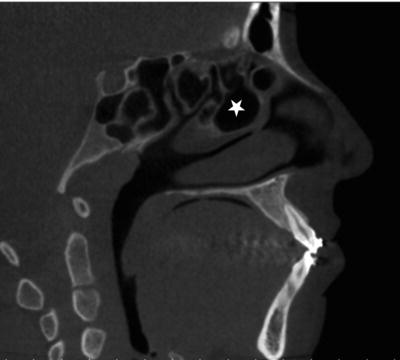 Only the attachment portion of the middle turbinate is pneumatized, and the pneumatization does not extend into the bulbous segment (see Figures 4.13b, 4.14b, and 4.17). 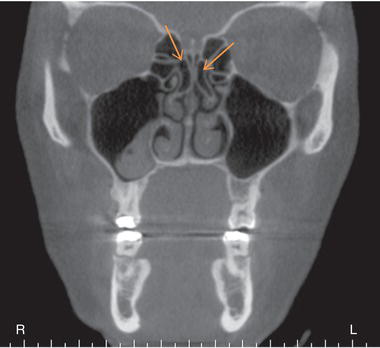 Anatomy of the Uncinate Process