• List and describe each of the basic histological types of tissue.

• Integrate the knowledge of the basic histology into an understanding of the specific histology of the orofacial region and its promotion of health as well as any related pathology that may occur.

Dental professionals must have a clear understanding of the histology of these basic tissue types before studying the distinct tissue types present in the oral cavity and associated regions of the face and neck. This information will help dental professionals fully understand the processes involving tissue repair during patient care to promote orofacial health, as well as the underlying pathological processes that can occur in these regions.

Most tissue of the body can be renewed as the individual cells die and are removed from the tissue. The turnover time is the time it takes for the newly divided cells to be completely replaced throughout the tissue. The turnover time differs for each of the basic tissue types, as well as for specific regions of the oral cavity. A complete understanding of turnover time may be the future basis for how aging and disease processes in the body are fought, including those occurring in the oral cavity.

Epithelium is the tissue type that covers and lines both the external and internal body surfaces, including vessels and small cavities. Epithelium not only serves as a protective covering or lining but is also involved in tissue absorption, secretin, sensory, and other specialized functions. It serves to protect the more complex inner structures from physical, chemical, and pathogenic attack, as well as dehydration and heat loss by the formation of an epithelial barrier.

Epithelium generally consists of closely grouped polyhedral cells surrounded by very little or no intercellular substance or tissue fluid (Figure 8-1). This tissue is capable of rapid turnover. In fact, epithelium is highly regenerative because its deeper germinal cells are capable of reproduction by mitosis (see Table 7-2). Epithelial cells usually undergo cellular differentiation as they move from the deeper germinal layers to the surface of the tissue.

Epithelium is avascular, having no blood supply of its own. Cellular nutrition consisting of oxygen and metabolites is obtained by diffusion from the adjoining connective tissue, which is usually highly vascularized, providing its own source of nutrition.

Epithelium can be classified into two main categories based on their arrangement into layers of cells: simple and stratified. Simple epithelium consists of a single layer of epithelial cells. The further classification of tissue involves different types of epithelial cells according to cellular shape; they can be simple squamous, simple cuboidal, or simple columnar (Table 8-2). 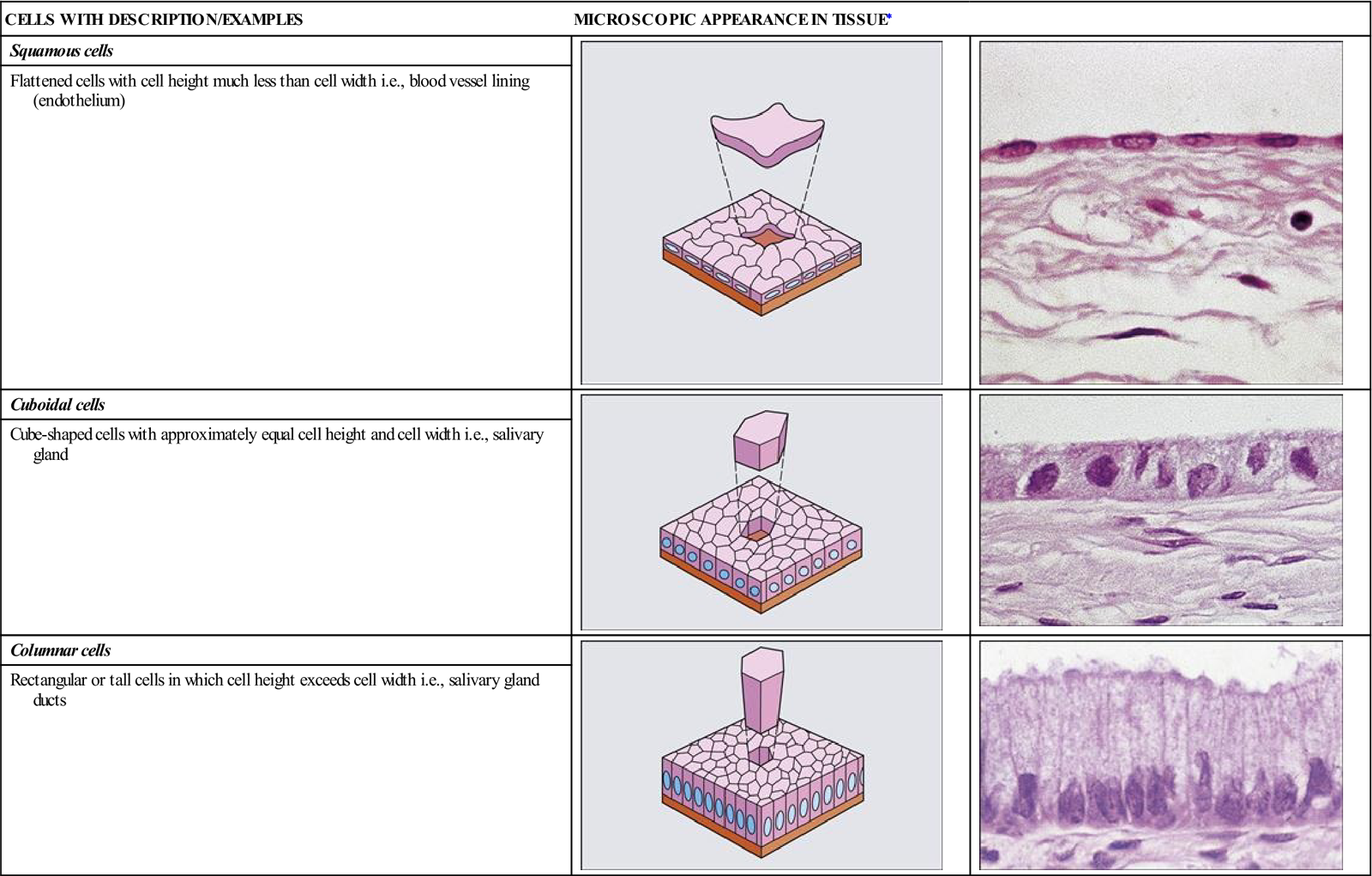 Epithelium can also be classified as pseudostratified columnar epithelium (Figure 8-2). This epithelium falsely appears as multiple cell layers when viewed under low-power microscopic magnification, because the cells’ nuclei appear at different levels (see Table 8-1). However, in reality, under higher microscopic magnification, cells of different heights are seen. Thus, this is a type of simple epithelium because all the cells line up to contact inner the basement membrane, but not all reach the outer surface of the tissue. Pseudostratified columnar epithelium lines the upper respiratory tract, including the nasal cavity and paranasal sinuses (see Figure 11-19). This type of epithelium may have cilia or be nonciliated at the tissue surface.

Most epithelium in the body is stratified squamous epithelium, which includes the superficial layer of the skin and oral mucosa (see Figures 8-1 and 8-7 and Chapter 9). Only the most superficial layers of this tissue are flat cells, or squames; the deeper cells vary from the deeper cuboidal to the more superficial polyhedral. Interdigitation of the outer epithelium with the deeper connective tissue, having a basement membrane between them, appear on two-dimensional microscopic sections as the rete ridges (or rete pegs).

Stratified squamous epithelium can be keratinized or nonkeratinized. Keratin (see Chapter 7) is a tough, fibrous, opaque, waterproof protein that is impervious to pathogenic invasion and resistant to friction. Keratin is produced during the maturation of the keratinocyte epithelial cells as they migrate from near the basement membrane to the surface of the keratinized tissue, which occurs in certain regions of the oral mucosa found in the oral cavity (see Figure 9-11).

Another example of keratinized stratified squamous epithelium is epidermis, which is the superficial layer of the skin (see Figures 8-1 and 8-7). The epidermis overlies a basement membrane and the adjoining deeper layers of connective tissue (dermis and hypodermis, respectively; discussed later). The skin has varying degrees of keratinization depending on the region of the body; areas such as the palms of the hands and bottom of the feet have thicker layers of keratin, which form calluses. However, the keratin is less densely packed in both the skin and oral cavity, as compared with the densely packed hard keratin of the nails and hair.

Turnover of epithelium occurs as the newly formed deepest cells migrate superficially from their formation near the basement membrane. Thus, the turnover time is the time needed for a cell to divide and pass through the entire thickness of tissue. In order to migrate, the cells release and then regain their desmosomal connections at their intercellular junctions in the more superficial location. The turnover time is higher for all types of epithelium, as compared to connective tissue. This higher turnover time is a result of the higher level of mitosis in those deepest dividing cells near the basement membrane. Thus, the older, superficial epithelial cells are being shed or lost at the same rate as the deeper germinal cells are dividing into more cells.

Thus the differences of turnover time are especially noted during repair or healing of the tissue after injury. Immediately after an injury to either the skin or oral mucosa, a clot from blood products forms in the area, and the inflammatory response is triggered by the blood’s white blood cells (WBCs) as they migrate into the tissue (Figure 8-3). If the source of injury is removed, tissue repair can begin within the next few days. The epithelial cells at the periphery of the injury will lose their desmosomal intercellular junctions and migrate to form a new epithelial surface layer beneath the clot.

Thus, a clot is very important in repair of the epithelium and must be retained in the first days of repair because it acts as a guide to form a new surface. A clot stays moist in the oral cavity but dries out on the skin (called a scab when on the skin). Later, after the epithelial surface is repaired, the clot is broken down by enzymes because it is no longer needed. Repair of the epithelium is a process that is also tied to repair in the deeper connective tissue (discussed later).

As discussed earlier, the basement membrane is a thin, acellular structure always located between any form of epithelium and its underlying connective tissue, as noted in both the skin and oral mucosa (Figure 8-4, see Figures 7-6 and 8-7). This type of structure is even present embryologically between the two types of tissue of the tooth germ during tooth development (see Figure 6-7).