• Outline the events that occur during the development of the teeth and associated structures and during tooth eruption, describing each step of formation.

Dens in dente (denz in den-tay)

Dental professionals must have a clear understanding of the stages of odontogenesis or tooth development and their physiological basis. Developmental disturbances can occur within each stage of odontogenesis, affecting the physiological processes taking place. These developmental disturbances can have ramifications that may affect the clinical treatment of a patient.

Development of the Dentitions

This chapter initially focuses on the development of the primary dentition, and then its eruption and shedding. The final discussion centers on the eruption of the permanent dentition. The process of development for both dentitions is similar; only the associated time frame for each is different. The overall general dental anatomy associated with both these dentitions is discussed further in Chapter 15.

Odontogenesis takes place in stages, which occur in a stepwise fashion for both dentitions (Table 6-1). Odontogenesis is a continuous process until completed, and there is no clear-cut beginning or end point between stages. However, these stages are used to help focus on the different events in odontogenesis and are based on the appearance of the developing structures. After initiation of odontogenesis, identifiable stages in tooth development include the bud stage, the cap stage, and the bell stage. Odontogenesis then progresses to the stage of apposition with the formation of the hard dental tissue types, such as enamel, dentin, and cementum, and then finally to the stage of maturation for these structures (Table 6-2). 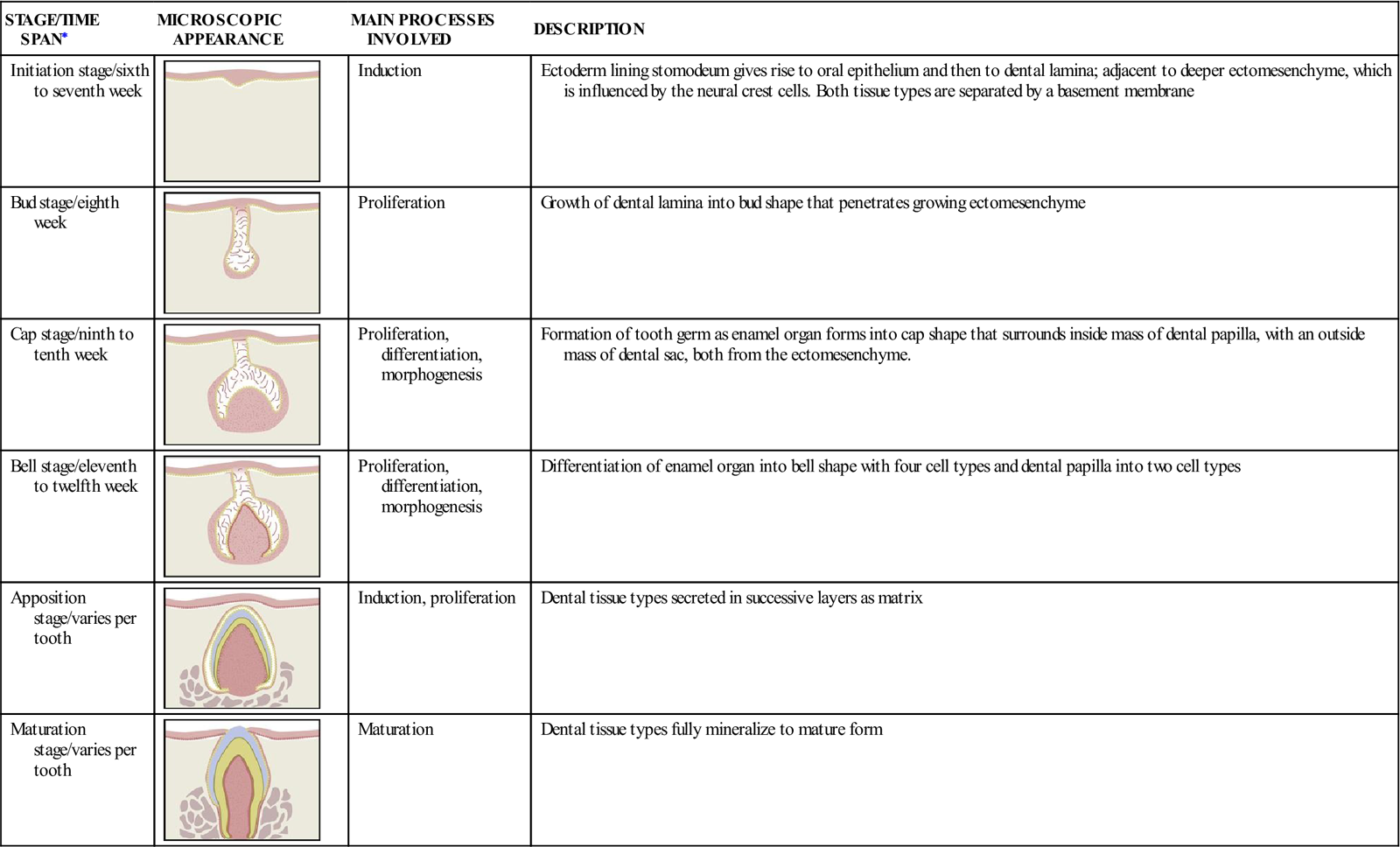 ∗Note that these are approximate prenatal time spans for the development of the primary dentition. 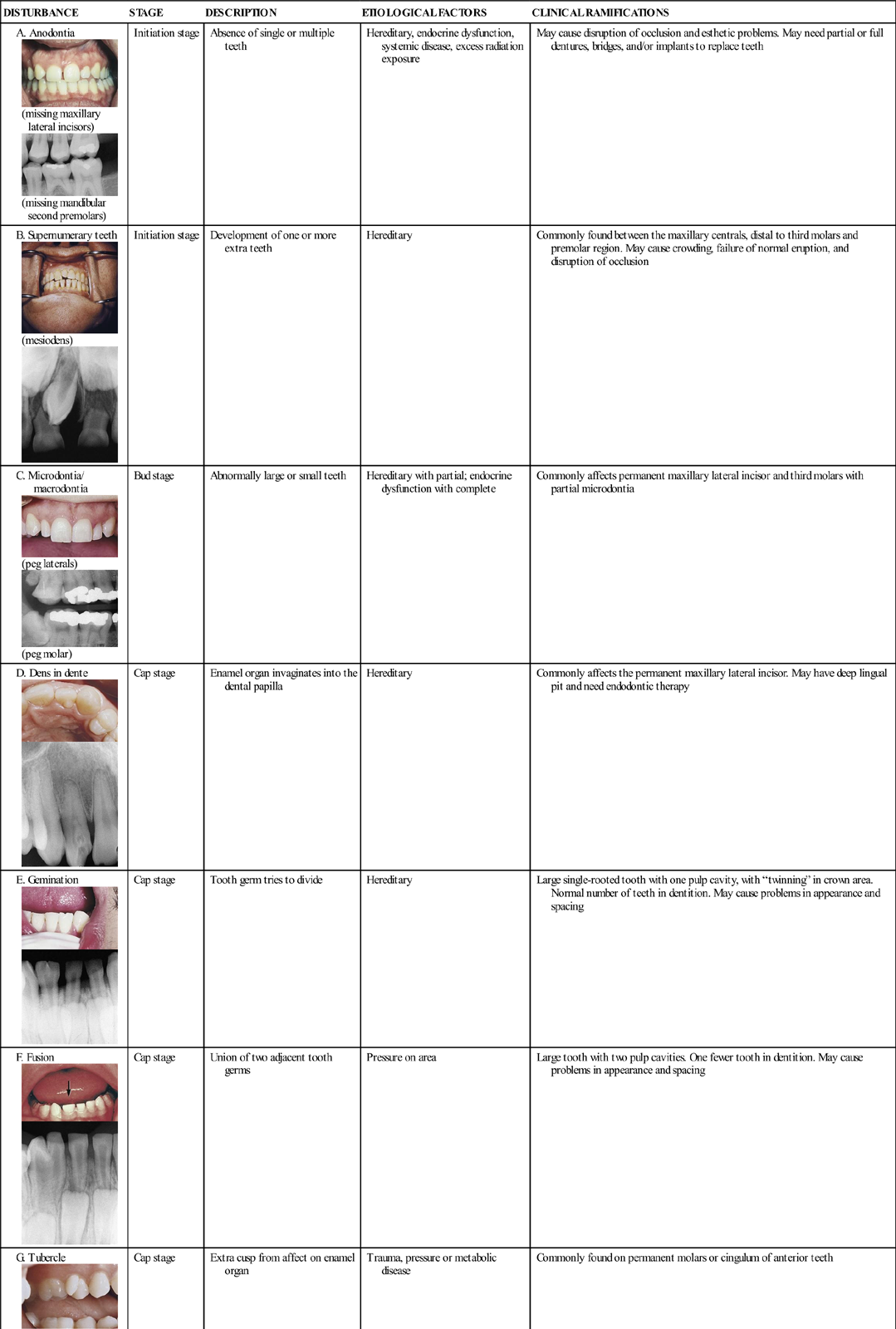 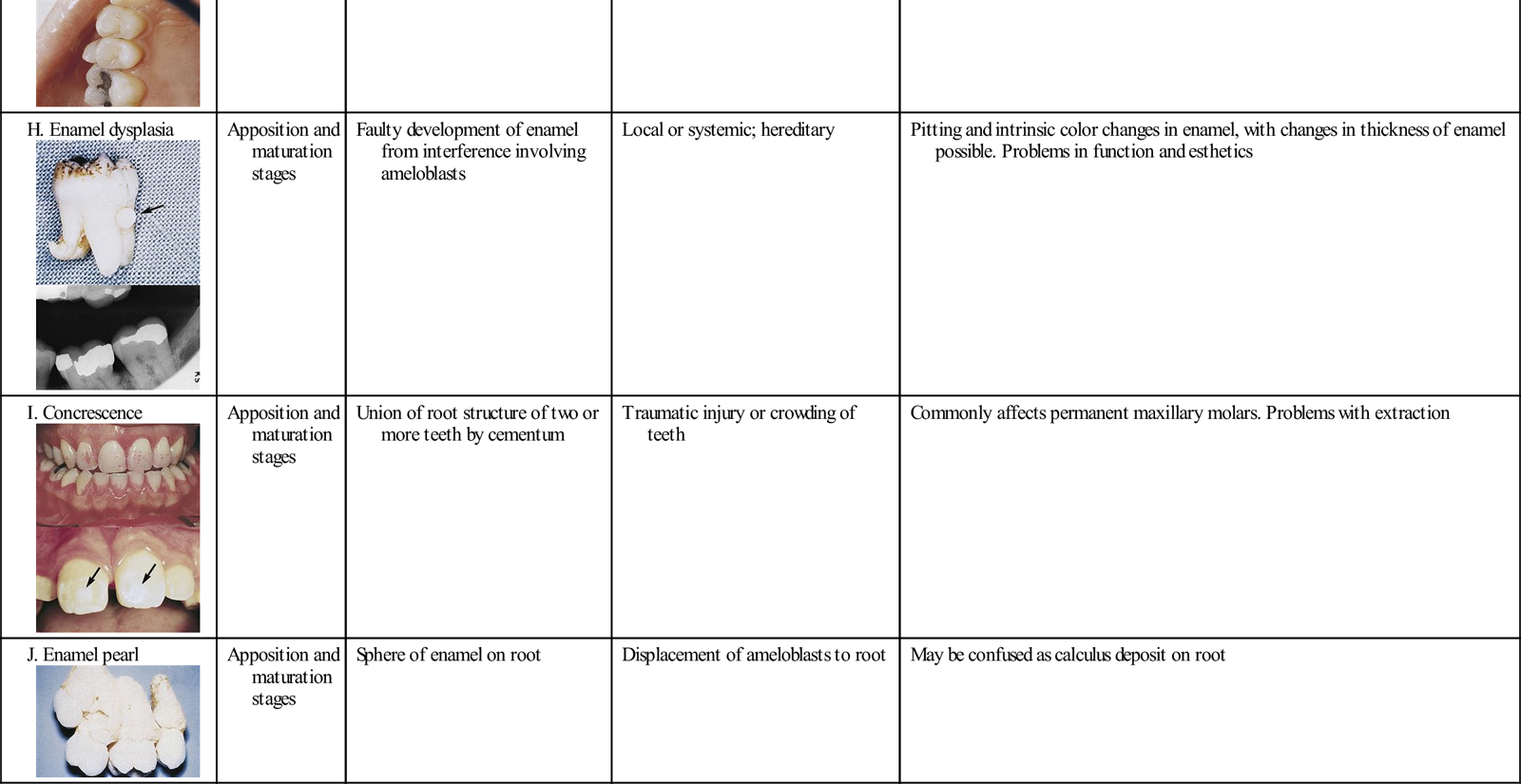 In the past, the study of odontogenesis included a discussion of developmental lobes that were thought to be growth centers during tooth development. These parts of the crown of the tooth are both microscopically and clinically visible by the presence of associated depressions. Whether there may be any justification for including them in a discussion of tooth formation remains controversial; developmental lobes may simply be evidence of the tooth form only, but information concerning lobes are included in this textbook for completeness.

Not all the teeth in each dentition begin to develop at the same time across each arch of the jaws. The initial teeth for both dentitions develop in the anterior mandibular region, followed later by the anterior maxillary region, and then development progresses posteriorly in both jaws. This posterior progression of odontogenesis allows time for the jaws to grow to accommodate the increased number of primary teeth, the larger primary molars, and then finally the overall larger permanent teeth.

Odontogenesis of the primary dentition begins between the sixth and seventh week of prenatal development, during the embryonic period (Figure 6-1). This first stage of tooth development, known as the initiation stage, involves the physiological process of induction, which is an active interaction between the embryological tissue types. Studies show that mesenchymal tissue must influence the ectodermal tissue in order to initiate odontogenesis, but the exact mechanisms are unknown at this time.

At the beginning of the sixth week, the embryo’s stomodeum, or primitive mouth, is lined by ectoderm (see Chapter 4). The outer part of the ectoderm gives rise to oral epithelium. The oral epithelium initially consists of two horseshoe-shaped bands of tissue at the surface of the stomodeum, one for each future arch or jaw. At the same time, deep to the forming oral epithelium, there is a type of mesenchyme originally from the ectoderm, ectomesenchyme, which is influenced by neural crest cells that have migrated to the area (see Figure 6-1).

During the later part of the seventh week, the oral epithelium grows deeper into the ectomesenchyme and is induced to produce a layer, the dental lamina (Figure 6-2). This growth occurs in the developing jaw areas where the two future curved dental arches of the primary dentition will form. The dental lamina then begins to form initially in the midline for both arches and progresses posteriorly.