Base metal alloys contain no gold, platinum or palladium. Their composition and properties are specified in three ISO standards for alloys. ISO 6871 specifies composition limits and requirements for dental base metal casting alloys used to construct removable dental appliances. There are two parts to this standard reflecting the two main groups of materials used, namely the Co/Cr alloys (part I) and the Ni/Cr alloys (part II). ISO 16744 specifies requirements for base metal alloys used to construct fixed dental restorations. There is no provision within this latter standard to further describe alloys according to composition (except for limiting the quantity of hazardous metals) but greater emphasis is placed upon classifying materials according to properties and aligning these properties to the four types of casting gold alloys described in the previous chapter.

The composition of alloys is described according to the limits given in the appropriate ISO standards.

The chemical composition of these alloys specified in the ISO Standard for Dental Base Metal Casting Alloys (Part 1) is as follows:

A typical material would contain 35–65% cobalt, 25–35% chromium, 0–30% nickel, a little molybdenum and trace quantities of other elements such as beryllium, silicon and carbon. Cobalt and nickel are hard, strong metals. The main purpose of the chromium is to further harden the alloy by solution hardening and also to impart corrosion resistance by the passivating effect. Chromium exposed at the surface of the alloy rapidly becomes oxidized to form a thin, passive, surface layer of chromic oxide which prevents further attack on the bulk of the alloy. The concentrations of the minor constituents have a greater effect on the physical properties of the alloys than do the relative cobalt–chromium–nickel concentrations. The minor elements are generally added to improve casting and handling characteristics and modify mechanical properties. For example, silicon imparts good casting properties to a nickelcontaining alloy and increases its ductility. Likewise, molybdenum and beryllium are added to refine the grain structure and improve the behaviour of base metal alloys during casting. Carbon affects the hardness, strength and ductility of the alloys and the exact concentration of carbon is one of the major factors controlling alloy properties. The carbon forms carbides with any of the components and its concentration depends on both the amount added by the manufacturer and that which may be inadvertently introduced during casting if the alloy is melted with an oxyacetylene torch. The presence of too much carbon results in a brittle alloy with very low ductility and an increased danger of fracture. During crystallization the carbides become precipitated in the interdendritic regions which form the grain boundaries. The grains are generally much larger than those produced on casting gold alloys and it is possible for the precipitated carbides to form a continuous phase throughout the alloy. If this occurs the alloy becomes extremely hard and brittle as the carbide phase acts as a barrier to slip. A discontinuous carbide phase is preferable since it allows some slip and reduces brittleness. Whether a continuous or discontinuous carbide phase is formed depends on the amount of carbon present and on the casting technique. High melting temperatures during casting favour discontinuous carbide phases but there is a limit to which this can be used to any advantage since the use of very high casting temperatures can cause interactions between the alloy and the mould.

The chemical composition of these alloys specified in the ISO Standard for Dental Base Metal Casting Alloys (Part 2) is as follows:

As for the Co/Cr alloys the concentrations of minor ingredients can have a profound effect on properties. The concentration of carbon and the nature of the grain boundaries are major factors in controlling the properties of these alloys.

These alloys are similar to those described within the previous two categories but the composition limits are less prescriptive. This approach used in ISO 16744 represents a trend in the development of standards in which more emphasis is put on meeting the requirements for certain key properties than on composition. These alloys consist of a variety of mixtures of Co, Cr, Ni and Mo but there are strict limits on the use of materials considered to be hazardous. For example, the limit for beryllium and cadmium is only 0.02% whilst alloys containing more than 0.1% nickel are required to carry a hazard warning.

8.3 Manipulation of base metal casting alloys

The fusion temperatures of the Ni/Cr and Co/Cr alloys vary with composition but are generally in the range 1200–1500°C. This is considerably higher than for the casting gold alloys which rarely have fusion temperatures above 950°C. Melting of gold alloys can readily be achieved using a gas–air mixture. For base metal alloys, however, either an acetylene–oxygen flame or an electrical induction furnace is required. The latter method is to be favoured since it is carried out under more controlled conditions. When using oxyacetylene flames the ratio of oxygen to acetylene must be carefully controlled. Too much oxygen may cause oxidation of the alloy whilst an excess of acetylene produces an increase in the metal carbide content leading to embrittlement.

Investment moulds for base metal alloys must be capable of maintaining their integrity at the high casting temperatures used. Silica-bonded and phosphate-bonded materials are favoured with the latter product being most widely used. Gypsum bonded investments decompose above 1200°C to form sulphur dioxide which may be absorbed by the casting, causing embrittlement. This effect can be reduced by the incorporation of oxalate in the investment, however the problem is generally avoided by choosing an investment which is more stable at elevated temperatures.

The density values of base metal alloys are approximately half those of the casting gold alloys. For this reason the thrust developed during casting may be somewhat lower, with the possibility that the casting may not adequately fill the mould. Casting machines used for base metal alloys must therefore be capable of producing extra thrust which overcomes this deficiency. The problem may be aggravated if the investment is not sufficiently porous to allow escape of trapped air and other gases. Careful use of vents and sprues of adequate size is normally sufficient to overcome such problems.

The greatest expense involved in producing a Co/Cr dental casting is in the time required for trimming and polishing. In the ‘as cast’ state, the alloy surface is normally quite rough, partially due to the coarse nature of some investment powders. Finer investments can be used to give a smoother surface requiring less finishing. One common technique involves painting the wax pattern with fine investment – this then forms the inner surface of the investment mould. The bulk of the mould is then formed from the coarser grade material.

Base metal alloys, and particularly the Co/Cr type, are very hard and consequently difficult to polish. After casting, it is usual to sandblast the metal to remove any surface roughness or adherent investment material as well as the green layer of oxide which coats the surface after casting. Electrolytic polishing may then be carried out. This procedure is essentially the opposite to electroplating. If a rough metal surface is connected as the anode in a bath of strongly acidic electrolyte, a current passing between it and the cathode will cause the anode to ionize and lose a surface film of metal. With a suitable electrolyte and the correct current density, the first products of electrolysis will collect in the hollows of the rough metal surface and so prevent further attack in these areas. The prominences of the metal surface will continue to be dissolved and in this way the contours of the surface are smoothed. Final polishing can be carried out using a high-speed polishing buff.

The process of electropolishing is not generally used for Ni/Cr alloy castings. These products are normally used for crown and bridge work and it is essential to maintain the accuracy of fit, particularly at the margins of crowns. This accuracy may be lost during polishing procedures and care is required to avoid such problems. 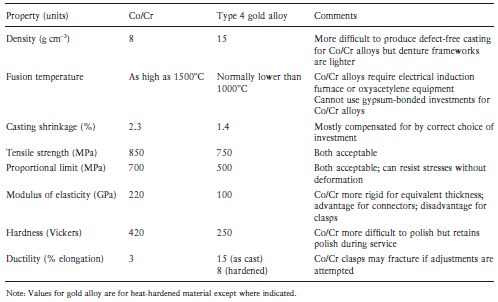 The properties of these alloys vary from one brand to another but typical values are listed in Tables 8.1 and 8.2. The ISO standards for both materials require a minimum of 0.2% proof stress of 500 MPa and a minimum elongation after fracture of 3%. Hence an ability to withstand permanent deformation under stress and a reasonable ductility are deemed to be important characteristics of these alloys.

The Co/Cr and Ni/Cr alloys are very hard materials and although this makes the polishing of castings a difficult process the final polished surface is very durable and resistant to scratching. In addition, fine margins seem less likely to be lost during finishing of a base metal alloy.

Co/Cr and Ni/Cr alloys have very good corrosion resistance by virtue of the passivating effect (see Section 2.7). The alloys are covered with a tenacious thin layer of chromic oxide which protects the bulk of the alloy from attack. Unlike chromium-plated metals, which lose their corrosion resistance if the surface layer becomes scratched, these alloys are permanently resistant to corrosion since the oxide layer immediately becomes replenished if the surface is damaged. 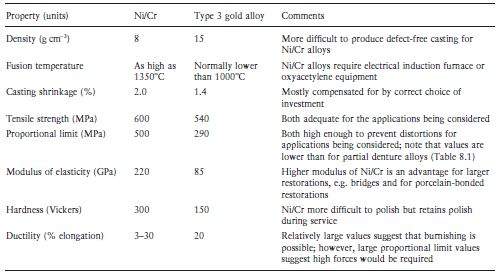 ISO standards recommend that the cor/>