The selection of proper anchorage is an integral part of planning an efficient orthodontic treatment mechanics. A secure, stable anchorage is essential to avoid undesirable or detrimental effects on anchor units. Recognizing that anchorage was frequently the limiting factor in relation to orthodontic treatment with fixed appliances, a large range of solutions to these problems has been suggested.1–4 Occlusal discrepancies have been treated by intermaxillary elastics, and for patients with Class II malocclusions, bite jumping devices were introduced as a compliance-free solution to functional appliances.5–7 In the case of intramaxillary tooth movements, special attention is required whenever a lack of balance exists, i.e. all or more teeth have to be displaced in one direction while only few or none should be moved in the opposite direction. Differential anchorage was suggested by Burstone8 who based the anchorage on the fact that tipping is easier than translation and root movement. As the development of vertical forces was inherent to this approach, extraoral anchorage was still considered a useful adjunct.9 However, the dependency of compliance and the undesirable side effects such as reduction of the airways, root resorption,10 and the demonstration of the return of the molars to their original position below the key ridge11,12 are gradually leading many orthodontists to abandon this appliance.

The need for an alternative anchorage was reflected in an attempt to evaluate the usefulness of screws as anchorage, made as early as in 1945 when Gainsforth and Higley13 inserted and immediately loaded 13-mm long vitallium screws in the mandibular ramus of mongrel dogs. All the screws were loaded with forces in the range of 140–200 g and became loose between 16 and 31 days after insertion. These discouraging results probably delayed further experiments in this field. However, the need for a solution to a specific problem led various clinicians to present case reports demonstrating custom-made solutions to specific problems. Creekmore and Eklund14 demonstrated in a case that a surgical screw could be used as an anchorage for intrusion of incisors. Roberts was faced with the problem of having to displace the third and the second molars into the extraction space of a first molar without exerting distal forces to other teeth. He suggested the use of a small dental implant in the retromolar region as anchorage.15,16 Kanomi17 used miniscrews as anchorage for the displacement of lower incisors, and Melsen et al18 applied surgical ligatures through a hole in the infrazygomatic crest as anchorage for retraction of upper anterior teeth in the absence of posterior occlusion. Later Costa et al used a surgical screw inserted into the infrazygomatic crest for the same purpose.

Meanwhile, it had become evident that dental implants meant for prosthodontic reconstruction constituted an excellent anchorage for orthodontic tooth movements. The first studies were published in 1983 by Gray et al19 who evaluated the stability of implants inserted in rabbit femur and subjected to forces ranging from 60 to 180 g after 4 weeks of healing. They found that the implants remained stable, independent of the force level, and concluded that implants constituted a useful adjunct to modern orthodontics. A number of authors used dental implants as anchorage and special superstructures were developed to make the use of the implants easier.2,19–25

A third type of skeletal anchorage, the miniplates fixed with two surgical screws, served as a replacement for the headgear and as a tool by means of which surgical interventions could be avoided. Sugawara32–34 treated patients with open bite by intrusion of both upper and lower buccal segments against miniplates and the treatments would thus replace bimaxillary surgery.

By far, the majority of the presently available ‘screws’ come from the surgical world, and screws are generally meant to be removed following healing of the bone. They are loaded immediately utilizing the primary stability and are thus dependent on the mechanical retention anticipating that they might loosen due to the repair process occurring following insertion. However, the mechanical retention is replaced, and an increased stability is generated by the adjacent bone formation, which is often in contact with the surface of the ‘screw’.

Since the first case reports, a steadily increasing number of skeletal anchorage systems are being introduced frequently, with only the manufacturer’s evidence for their outstanding properties. As the marketing has been overwhelming and newer gadgets are being introduced in the field of orthodontics, the solution to all problems can be ‘bought’. Some are even sold with ‘Intelligent design’. ‘Will the next be the “Divine screw”’? However, the miniimplants, like every other tool should be selected for its specific purpose.

Mini-implants, miniscrews, microimplants and temporary anchorage devices – the terminology is still not agreed upon universally, and a large diversity of screws is in the market. What should the orthodontist look for? When a carpenter, a mechanic, a surgeon or an orthodontist is choosing a screw, a number of parameters should be fixed: the material, the length, the diameter, the tip, the cut, the neck, the head and the screw driver. The same screw may not necessarily be optimal for all purposes. How do we perform this intelligent selection? Is our field so unique or can we utilize the rationale used by other professions when choosing screws?

Most available orthodontic screws are manufactured from titanium and vanadium alloys, Grade V. However, an exact material specification is frequently missing. The alloy used for the Aarhus-Mini-Implant® is Ti6AL-4V ELI acc ASTM F 136–02a (MEDICON eG, Tuttlingen, Germany).

A single screw (the OMI-Orthodontic Mini Implant®, Leone, Florence, Italy) is made from surgical steel 1.4441, which has a higher Young’s modulus than the titanium alloys, rendering it more resistant to bending and fracture. The interface between bone and steel is, on the other hand, less developed than that between bone and titanium, and in some countries, is allowed only for emergency craniofacial surgery.

Unlike prosthetic (osseointegrated) implants, orthodontic anchorage screws are generally not coated as they should be easily inserted and removed after having served their purpose. The anodized layer that gives the screw its colour may also improve the retention of the implant.35 There is no doubt that increasing the effective surface area by coating or sandblasting will increase the retention as is the case with the short mini-implants used in the palate and in the retromolar region.36 The disadvantage, nevertheless, is that the removal may necessitate a trephine.

Several studies have demonstrated that with osseointergration, the bone-to-implant contact is generated during the healing phase, and that the mechanical retention generated during insertion is sufficient to maintain stability while it is being replaced by new bone formation adjacent to the screw. Lietz37 distinguishes between the ‘macro-osseointegration’-bone-to-screw contact observed adjacent to the screws – and the micro-osseointegration occurring adjacent to a ‘treated surface’. This makes more sense than just stating that a bone-to-screw contact is the basis for an increasing stability of the screw.

The length of the available screws varies between 4 and 15 mm. According to Costa et al38 and Poggio et al,39 the most useful lengths are between 6 and 10 mm (Fig 7.1). The length is limited by the insertion site, but the relationship between the lengths and the retention of the screws depends on the type of material into which a screw is inserted. Since the screw in the oral region is inserted into the cortical bone of varying thickness surrounding the trabecular bone of varying density, an increase in length by certain percentage will not necessarily increase the stability by the same percentage as the increased length will be in trabecular bone. The type of loading will, however, also interact with the relationship between the length and the stability, as well as with the insertion angle. In a pull-out test, the cortical bone will determine the threshold and increasing the length will not have any significant impact. In case of a loading that is perpendicular to the long axis, the centre of rotation will often be at the endosteal part of the cortex and the density of the trabecular bone will not play an important role (Fig 7.2).

Figure 7.2 (A) Autopsy material from an edentulous premolar region from the mandible of a 35-year-old man. The centre of rotation of the miniimplant when loaded perpendicular to the long axis would be at the endosteal surface of the cortex. (B) Relationship between cortical thickness, three different trabecular densities and bone reaction when loaded with 50 cN. In the red area, the bone turnover will result in a loosening; in the pink area, there is a balance between resorption and apposition; whereas there will be an increased density and as a result, a positive balance in the yellow area. Image courtesy: M Dalstra

Inserting the screw at a certain angle will influence the part of the screw surrounded by cortical bone (Fig 7.3).40 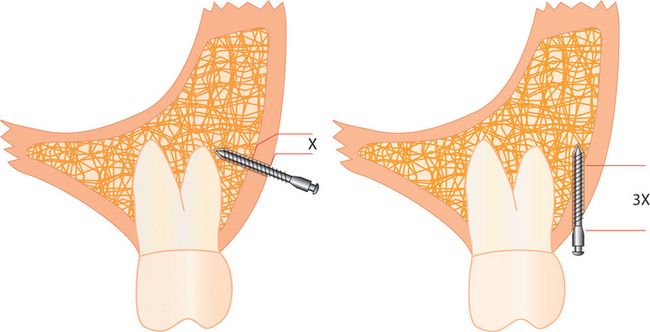 Figure 7.3 Illustration of how a change in the angulation of the screw during insertion can change the surface area in contact with cortical bone.

Diameter of the miniscrew

The diameter of the intraosseous part of the screw varies between 1.2 and 2.5 mm. This parameter generally expresses the outer diameter. Thinner screws have been applied in the maxilla where they have been inserted between the roots of the molars and have served as anchorage for retraction of front segments. Thicker screws are generally applied in the mandible where the cortex is thicker and denser. The shank determines the strength of the screw, and the difference between the outer diameter and the diameter of the shank is therefore also of importance. An increased depth of the threading will increase the primary stability and will also result in a thinner shank and in an increased fragility. Independent of the material, there is a fixed relationship between the stresses and thereby risk of fracture and the diameter (Fig 7.4). Increasing the diameter from 1.1 to 1.3 mm reduces the fracture risk by 50%. 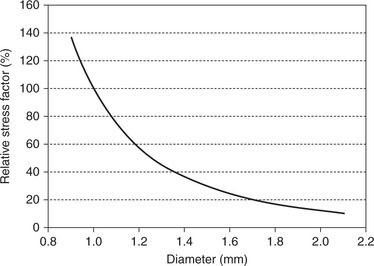 Figure 7.4 Relationship between the internal stresses when loaded and the diameter of a screw. It can be seen that a slight increase in the diameter will reduce the risk of fracture dramatically. Image courtesy: M Dalstra

A thicker screw has a larger risk of damaging roots if inserted in the alveolar process, but will also increase the mechanical retention as the surface area is directly correlated with the diameter. Miyawaki et al41 found 85% success for the 1.5-mm screws whereas the 1-mm screws had a 100% failure.

Several parameters related to the cut influence the stability, but the results depend on whether the tests are done in the laboratory and focused only on primary stability immediately following insertion42 and thereby not taking the tissue reaction into consideration or the result of clinical studies assessing the failure rate secondary to various types of loading. However, also the way of testing may influence the result. The cut of the tip of the screw is also related to the mode of insertion whether requiring predrilling or not.

Self-drilling screws do not need predrilling whereas a self-tapping screw needs predrilling. The damage to the tissues during insertion depends on whether the screw is self-drilling or self-cutting. In the first case, the tissue will be cut whereas the latter depends more on pressure (Fig 7.5). 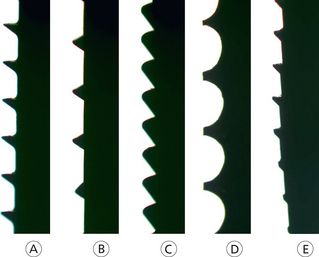 There has been some discussion in the literature regarding the tissue damage done when inserting a self-drilling or a self-tapping screw. The self-drilling principle is generally used in the case of surgical screw whereas the pretapping can be considered an inheritance from the dental implants that are all self-tapping. Most screws in the market are self-drilling but the tip of the threading is still blunt. A maximum cut and a minimum pressure is obtained when the tip is sharp.

Also the angle of the threading, the ascent, is import/>