The basics of positron emission tomography (PET) are introduced in this chapter; the clinical applications are further discussed in Chapter 18. PET is a nuclear imaging technique based on metabolic mechanisms. These mechanisms can be enzymatic, hormonal, or pharmacological. PET uses the unique decay characteristics of nucleotides that decay by positron emission. The labeled compound is introduced into the body, usually intravenously, and is distributed in the tissues in a manner determined by its biological properties

When the radioactive atom of a particular labeled molecule decays, a positron is emitted from the nucleus. The positron is an antimatter analogue of an electron. It has the same mass as an electron, but it carries a positive charge. It is produced when 18 isotope of fluorine decays to 18 isotope of oxygen. When a positron meets an electron they mutually annihilate each other, each completely converted into 2 photons each of energy 511KeV (annihilation radiation) traveling in opposite directions.

Such an event will be detected when each of the two photons interact simultaneously with two detectors on opposite sides of the detector ring surrounding that part of the patient (Figure 7.1). These detectors must lie within a column joining the two, which passes through the site of annihilation. This is called coincidence.1

Figure 7.1. Coincidence. At the site of annihilation 2 photons of energy 511KeV are released and travel in opposite directions to interact with a detector at diametrically opposite sites on the stationary ring of detectors. These interactions result in signals that then contribute to the subsequent image. 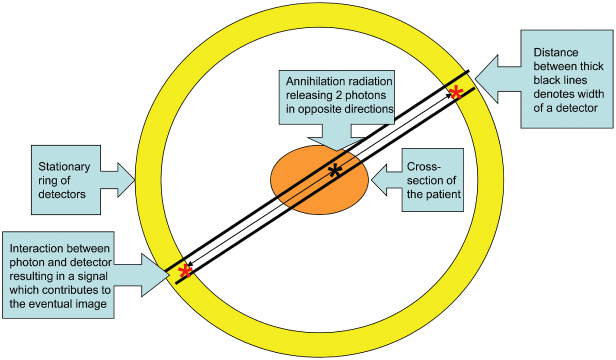 At a first glance the PET scanner looks like a CT unit. Unlike CT, where the source of radiation arising from the unit itself is outside the patient, in PET the source of radiation arises from within the patient. The PET scanner merely detects this radiation. It achieves this by a stationary ring of detectors that surround the patient or part of the patient to be imaged. It converts and reconstructs the signals from the detectors into a three-dimensional image. The signal intensity of any particular image voxel is proportional to the amount of the radionucleotide (and hence the amount of molecule to which it is attached) in that voxel.

There are a number of potential tracers, but 18 fluorine fluoro-deoxyglucose (FDG) is preferred because it detects the intense accumulation of FDG in malignant neoplasms. This reflects the increased glycolytic rate of the malignant neoplasm. Furthermore, its longer half-life (110 minutes) allows sufficient time to transport it from the cyclotron where it is produced to the hospital where it will be delivered to the patient.

Once FDG has passed into the cell and has been phosphorylated, unlike glucose-6-phosphate, it can no longer be metabolized and remains in the cell until it decays, thus marking the cell. During the examination the kidneys are removing />