Theories of Pain Perception: Why and How It Is Experienced

The English word pain is derived from an ancient Greek word meaning “penalty” and a Latin word meaning “punishment” as well as “penalty.” When the term pain is used in clinical dentistry or medicine, it is synonymous with strong discomfort. It is important to realize that despite the distress experienced by the person in pain, pain has a uniquely purposeful and necessary function. Pain signals real or apparent tissue damage that thereby energizes the organism to take action in relieving or alleviating its presence. In this sense, it is a desirable experience for maintaining and guiding the activities in life.

It is important to understand that pain is more than just a sensation and a consequential response. It is a highly complex, multifaceted interaction of physical, chemical, humoral, affective (emotional), cognitive, psychological, behavioral, and social elements. Certainly, the determinants of how an individual interprets and reacts to pain are not clearly understood. However, the body of knowledge surrounding the understanding of pain recently has begun to evolve and is accelerating rapidly into a scientific and useful discipline.

An interesting and clinically relevant parallel experience to pain is the presence of anticipatory responses secondarily acquired from the pain experience. These are conceptualized and broadly referred to as “stress” and “fear.” Children and adults can be profoundly influenced by the processes attending many events perceived as fearsome, stressful, or both, including various dental procedures. For example, the 2-year-old child who presents with painful, abscessed maxillary anterior teeth due to nursing bottle caries and poorly endures the injection of local anesthesia and extractions while restrained in a papoose board will most likely develop strong disruptive and avoidance behaviors. Such behaviors may include crying with or without tears, placing hands over the mouth, refusing to open the mouth, kicking, screaming, shaking the head, spitting, and biting. These may manifest during subsequent dental appointments.

Likewise, adult patients who have been hurt either as a child or as an adult by a dentist who was not considerate or empathetic may have difficulty making and keeping appointments.

Pain is a highly personalized state attending tissue damage that is either real (e.g., skin laceration) or apparent (e.g., excess bowel distention) as a result of an adequate stimulus. Under normal circumstances, the state of pain implies that there is a simultaneous activation of cognitive, emotional, and behavioral consequences that provides both motivation and a direction to action.

Pain can fluctuate in intensity and quality as a consequence of the passage of time. This may be as significant to the individual as the original insult. For instance, the intensely sharp, shooting pain in the lower back of a person who used an improper weight-lifting technique may change over time (and therapies) to an intermittent deadening, dull ache that may significantly interfere with a routine lifestyle.

Physiologically, pain involves neural signals that are transmitted over a multitude of pathways involving neurons that are specialized in space, biochemistry, size, and shape. These signals induce a host of secondary responses that may become organized in a hierarchy of systems involving portions of the central nervous system (CNS). At the physiologic level, some of these responses involve further transmission of neural signals and the release of neurochemicals and humorally active chemicals (e.g., γ-aminobutyric acid and endogenous opioids). Other systems within this response hierarchy include those that activate motor activities for purposeful escape; still others result in emotional and cognitive appreciation of the pain experience.

Research is showing that the emotional and cognitive elements in the pain process have critical roles in the degree of pain awareness and, possibly more importantly, in the individual’s ability to induce self-control while enduring the suffering or its consequences.1 For instance, cognitive mechanisms (e.g., cognitive dissociation) that reduce the perceived quality and quantity of discomfort can be effectively taught to a patient before the experience of clinical or laboratory-induced pain. Children, through the process of suggestion, can be taught (to varying degrees) to ignore or to inhibit responsiveness to painful stimuli during cancer therapies.2,3

Theories of Pain Perception: Why and How It Is Experienced

In the late 19th century, it was believed that the pain experience was merely a function of activating a particular set of neurons that resulted, metaphorically speaking, in a “ringing of the bell” at higher levels of the CNS signifying discomfort.4,5 The neural receptors (i.e., free nerve endings) and their pathways were considered to be specialized for the process of pain, just as other elements and pathways were rigidly designed as passages for other sensory information (i.e., pressure sensation).

Portions of this theory are reasonably accurate descriptions and therefore remain prominent in our understanding of the pain mechanism, but the simplicity of the theory is inadequate to explain the multifaceted nature of the pain experience (e.g., the phantom pain experienced by an amputee in the missing limb).

A slightly more sophisticated model of pain mechanisms arose as a consequence of the technological ability to record stimulus-induced activity within neural pathways. Neural activity recorded and amplified on an oscilloscope allowed some appreciation of the changes in timing and grouping of nerve action potentials as a consequence of modification in stimulus parameters. A light stroking across a patch of skin may provoke one or two isolated action potentials in large-diameter neurons servicing the area, whereas a hot thermistor (warming element) may cause an initial burst followed by a steady discharge of action potentials in smaller neurons.

It was theorized that the recognition of painful stimuli by the individual was based primarily on the pattern of nervous activity that entered the CNS. Again, this theory was inadequate to explain the complexity of the pain experience, but it contributed significantly to the advancement of knowledge about pain mechanisms.4,5

The gate control theory of pain (Figure 6-1) was developed by Melzack and Wall in 1965 and has been the most influential, comprehensive, and adaptive conceptualization of pain and its consequences to date. The essence of the theory proposes that various “gates” controlling the level of noxious input via small-fiber neurons to the spinal cord can be modulated by other sensory, large-fiber neurons; higher CNS input; or both. Postulated mechanisms for the gates include presynaptic inhibitory effects on secondary transmission cells in the spinal cord. In essence, this implies that large fibers (e.g., those for touch) can cause partial depolarization of the nerve terminals of small fibers (e.g., for pain) that innervate transmission cells in the spinal cord. This results in the release of fewer “packets” of neurotransmitter molecules and a decreased likelihood that transmission cells will summate and fire. 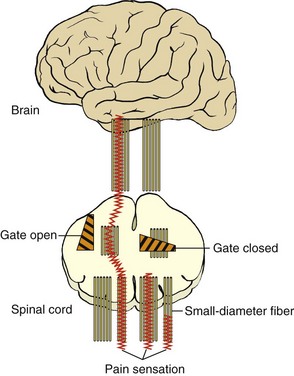 A simplistic example would be the ameliorative inhibitory effect of the parent rubbing a “bumped” area of the knee immediately following a toddler’s fall. The light rubbing disproportionately activates greater numbers of large fibers that inhibit previously activated small fibers. In dentistry, a shaking of the lip during insertion of the needle and delivery of local anesthesia is commonly believed by many to distract or lessen the associated discomfort.

Transcutaneous electrical nerve stimulation (TENS), or the use of low-intensity electrical stimulation at peripheral sites, has been shown to relieve pain.6 Although the mechanism for TENS-mediated pain relief is not known, it has been suggested that its segmental effects may be due to activation of large-diameter, primary afferent fibers that in turn inhibit small-fiber transmission as predicted by the gate theory. A similar mechanism may account for the effects of acupuncture. TENS has been shown to produce partial analgesia to electrical tooth pulp stimulation in school-aged children.7

Proportionately more emphasis has been placed on the role and influence of higher CNS modulation of pain perception and reactivity.1,8,9 This reorientation is partially the result of more sophisticated studies suggesting the need for a more comprehensive explanation of cognitive, behavioral, and emotional influences in pain perception and control.10 Discoveries of endogenous opioids, widespread locations of opioid receptors throughout the CNS, and unnatural (i.e., electrical) stimulation of CNS sites resulting in pain threshold elevations also have sparked renewed interest in pain research.

In addition, animal studies have documented the presence and influence of descending supraspinal mechanisms on modulating painful input at the level of the spinal cord.11 Interestingly, a phenomenon called stimulation-produced analgesia (SPA) has been demonstrated in both humans and animals. SPA results in specific inhibition of pain or avoidance behaviors during electrical stimulation of discrete brain sites (e.g., periaqueductal gray area of the medulla) and has few side effects. SPA of the periaqueductal gray area has been shown to inhibit jaw-opening reflexes due to tooth pulp stimulation in cats.12

In more recent years the CNS, and more specifically those components of the CNS we generally refer to as higher levels of CNS functioning (i.e., above the midbrain), has become a popular focus of pain research. In one theory, a highly complex neuronal network or matrix purportedly exists and is referred to as the neuromatrix (Figure 6-2). The neuromatrix is thought to have some genetic basis but can be influenced by the internal and external environment.13 The uniqueness of the genetic makeup of the neuromatrix and its ultimate functional identity may aid in distinguishing each individual’s “body-self.” It is through this neuromatrix that cyclical processing and synthesis of neuronal activity may result in a characteristic pattern known as a neurosignature. It has been theorized that neurosignatures can help explain complicated states like pain in individuals who experience a specified set of symptoms that have environmental, situational, or other influential mediators (e.g., emotions). This abstract model undoubtedly will stimulate a focus of future research to aid in diagnosing, understanding, and explaining many clinical conditions.